Started Off With a Bang

March 29, 2010
and closed with a torrential rainstorm! Oh my, how it poured on our drive home from Lake Wales, enough so that I had to pull off the road for a bit, hoping it would slow down. Not happening friends!

First off, I hope you like the new layout--clean and fresh.

Because of Bruce's awful schedule we did not set up the show on Friday night, instead opting to get up early and head over in the dark. Seriously, it wasn't a bad drive at all, a little over 50 miles all on highways. It took around an hour, which truth be told, it takes me about half that sometimes to get to shows in town. I had a lovely spot right on the lake with the added bonus of being able to park our car right behind the booth on the other side of a large bike path. Perfect start to a perfect day. Here's what it looked like as the sun was coming up: 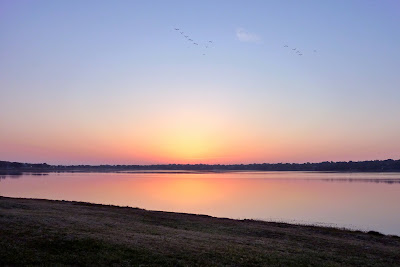 Working against the clock, we finished setting up with only minutes to spare. Before Bruce left to head home, I went to use the restroom. Walking back toward my booth, I saw a woman with a bag in hand that looked just like mine. Guess what? It was my bag. Bruce already made a sale minutes after the show started. This felt like a very good omen to me. Although he hated to leave me on my own, his workload demanded he do so. From then on I was inundated with both buyers and lookers, only finding time to eat the pizza slices I'd brought from home around 2. By the time I left a little after 5, I'd sold 50 pieces which I thought was a record. Lots of them were small purchases but they do add up. Predictably I sold some of the same stuff I always sell, but there were other images who found first time homes. That first buyer came back a little later wanting to trade the one she'd bought for two others and purchased what we call a baby canvas as well. She mentioned how lovely my husband was which always makes me happy. The weather was picture perfect the entire day--nary a cloud in the sky, cool breeze, and mild temperatures. Arriving home a little after 6, I was tired, but in a good way, even having enough energy to prepare a little supper before collapsing in bed.

Although I'd seen reports that rain was in the forecast, I was hoping it would hold off. Well, it did hold off pretty much until after we packed up, but not by much. Sunday morning I left the house a little after 8, arriving in time to open up the tent. That is one of the things that takes so long setting up a show, attaching all four outside walls. I won't go into how complicated it all is, but it definitely makes things harder. Anyway, this time Bruce put the zipper in the back, which was new to us, but something we'll adopt in the future. Very good. The wind was so strong, however, that I had to re-zip it to keep things from blowing around. That action did little to keep the dirt out, which blew off the ground onto everything in its' path. My little table in the back that I use for transactions was covered with dirt all day long. It's a darn good thing the prints are all in plastic is all I can say. Early on people were discussing closing due to said winds and expected rains.

This is where things get difficult for organizers of events like this. On the one hand, they want to protect the artist's work, on the other hand, they have to respect the people who've driven a ways to attend the show. The bottom line is that they closed the show at 2:00. I'd called Bruce earlier, telling him things were looking iffy and he should probably come by 3. I forgot to re-phone him until after 2, at which point, the weather was rapidly deteriorating. Fortunately he was on his way. By the time he arrived it was pretty much empty, enabling him to park right in front of the booth. Flanked by two vehicles, working together, we got it done. Did I mention Baxter came along for a Sunday drive with Bruce? Did I mention he was perfect? 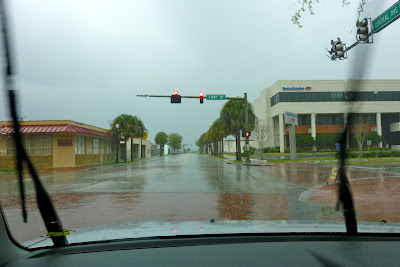 Don't let that picture fool you, it was only the beginning of the deluge. Look closely on the right and you'll see the road sign advertising the show!

I'm not too keen on driving when I can't see, however, I had no choice as the rain continued for the entire drive. Barely getting over 50mph any of the way it took us much longer than we'd have liked. The good news is we both arrived home safely about the time we'd have been closing the show. Wait--did I say we both? I left out Baxter's safe arrival. Shame on me!

Lest you think Sunday was a bust, although nothing like Saturday, I managed to sell 17 more things including a canvas. I'd expected things to be slow in the morning because of Palm Sunday, and they were; add iffy weather and you've got an equation that is not great for an artist. Once we'd completed our loading I noticed a tent still standing with a woman calmly sitting inside. I went over to chat a minute and she said she COULD NOT WAIT TO GET OUT OF FLORIDA! She and her husband travel the show circuit, staying mostly in Florida during the winter. They live in Ohio so you can see why! Anyway, she complained bitterly about the early closing, as well as the horrible winter we've had (still better than Ohio I imagine). What can you do? I checked the paper and this month we've had more than double our usual amount of rain; I only wish all that rain would be during the week!

One thing you've probably already guessed is that there are always lots of photographers at a show. This one had sixteen including me. That is a lot of competition, mostly with people far more experienced than I, not to mention those who have a following. As well, when I began this journey, Bill suggested I would have to learn Photoshop, which I've yet to do. Most of my competition are masters at the game, taking from one picture something they like and moving it into another, creating something entirely new. I just can't bring myself to do that--I love taking the photographs, and coming up with ideas to create something, I just don't find editing exciting. So now you know just how lucky I am to have the sales that I do. I'm very, very grateful.