March 24, 2010
Despite the fact that I've been shopping like a mad woman (for what seems like forever), I'm not really that keen on it. I suppose I could have let Jo talk me into all sorts of things from EA, however, it would have cost a fortune which goes against my grain--thus, I shopped. Normally I describe myself as frugal, yet just yesterday I realized what I really am is thrifty. I like that word, don't you? No wonder I like thrift shops so much! Mostly what I like to do is not spend more than is prudent. Thrifty, frugal, prudent--yikes where is this leading????

Here's where it's leading.....because the table is no longer under the chandelier, and to put one over the table may prove difficult, I'd decided on two lamps for the buffet flanking the vertically hung mirror. On Tuesday after the Polasek (surprisingly busy), I headed to Marshalls etc. on that side of town. Bringing home two lamps, I tested them out on Bruce. One was very funky, lucite balls for the stand with a brilliant orange shade. Cute. Bruce was not convinced. Because I have so many straight lines I thought the balls would not only be a nice contrast to the brick shaped wall, but a reflective surface as well. Sadly, I'd not thought of the two lamp option at that point, purchasing only one. This, my friends, led me on a chase for a second one, only at the opposite end of town. I was trying to combine some returns with a new purchase, but it was not to be. Or, it could have been, except I was having trouble convincing myself to drive back across town yet again. Which then led me to stop about midway at Lightstyles on Lake Ivanhoe. I think I've found my lamp, yes, only one, however they assured me they can order a second. The aforementioned lamp unfortunately costs three times as much as the Tuesday lamp. Clever readers that you are have realized that if I'd been frugal, I'd have just kept driving. Thrifty is what I am. Now, if only I'd found some used ones....

Before beginning the shopping marathon , Richard, the upholsterer came to the house, picking up one of the chairs to begin the transformation. According to this site Wise Geek, what I unknowingly purchased were slipper chairs. Now, don't you just love that name? I now am the proud owner of not only the "Groovy Chair", which has been in my office now for several years (now moved to LR), but two "Slipper Chairs." Cool names for things always pleases me. I think we're going to be pleased with the results.

While chatting with Mr. Richard, I asked him what sort of sewing machine he used. His answer: a 1910 Singer. Count me surprised. Because of all this busyness I'd not had time to unpack the little Singer I'd brought home from Mom Peck's house. Here it is: 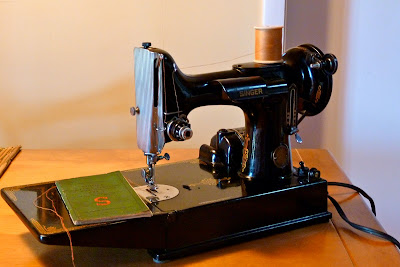 It smells quite musty but I suspect it runs like a champ. Plugging it in, I clicked on the light, and it worked perfectly. All sorts of presser feet are included, as well as an old-fashioned buttonholer. The last time I remember using a Singer machine was way back in 8th grade Home Ec class when the teacher told me I'd never learn to sew. I'm not sure if she was challenging me or what, but obviously she did not know what she was talking about. I digress....The manual, copyrighted 1941 is in excellent shape, with only a few pages unbound. While I ate my supper last evening I read the instructions realizing how little sewing has changed in many, many years. Sure, there are high tech machines now, but basically they all run pretty much the same. Of course, you knew I couldn't let something like this go by without a little history lesson now didn't you? TaDa! Singer

One task I've yet to complete is hemming the curtains which will have to wait until next week because this weekend I'm heading here:Amazing how they spelled it Lake Wailes which goes to show you that you can't believe everything you read, except for Camera Crazy; you can believe every word I write! This is one of the reasons Bruce just had to stay home last weekend, missing the wedding. My fault. Well, Darden played it's part, but you get my drift. As I type he's back in California, returning around midnight tonight. A new town+new audience+hope=sales? I'm still hovering just in the black this year--maybe this will be my tipping point?

Turns out a younger version of Mr. Peck was also in California this week. Sunday evening Matt flew out to LA for work, meaning he was coast to coast--literally. Sunday before we left Treasure Island, we walked on the beach for a bit. Blustery, gray, and chilly, it was beautiful in a different sort of way. Sand between your toes is a great feeling when it's not roasting hot, even more so on the beautiful Gulf shore. 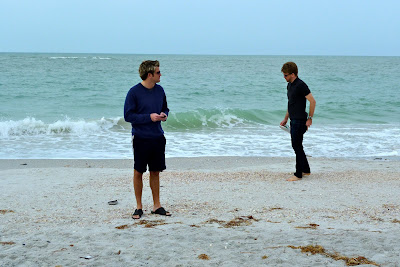 Next stop for Matthew--the Pacific. I should have told him the story of when we moved out there in 1977. I remember my first time seeing the Pacific ocean with Matt on my hip. When I put his little baby feet down into the water he climbed back up me like a monkey climbing a tree! Man, was it cold, even in August!

While he was here we made time to visit with Liza and her adorable new baby: 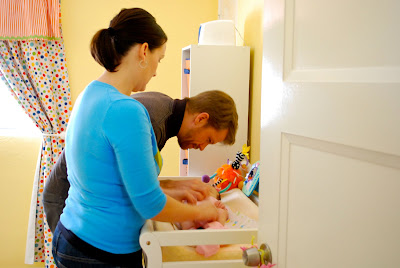 Ever since she was born in mid-January, Matt had been looking forward to seeing his best friend's little girl; we were not disappointed. Delightful in every way, her wake up stretching was particularly precious.

A picture perfect day in Orlando is calling me outdoors to enjoy it just now...