March 06, 2012
I realized over the weekend that I was remiss on updating you regarding the refrigerator. No doubt, you spent days wondering if Gail had added appliance repairman to her repertoire. She has not. After cleaning the disgusting side of the fridge which faces the stove, not to mention the floor and vacuuming the back, I discovered that, although the internet was a handy guide to what was wrong, I had no idea how to go about finding the drain. Well, that's not entirely true, Bruce pointed out on the back what he was sure was the drain but left before telling me how to dis-attach it from the fridge. Maybe that's not even a word but you get my drift. A call was made to Conway Appliance, a repairman came out within hours and after the easiest repair in the world we are back in business. So darn easy I only had to pay the $69 fee for him coming out. He yanked the drain plug off the back of the refrigerator, stuck a tube down it and dislodged a piece of ice. Voila!

Furthermore I never told you if I kept the shower curtain. I did not. After having such a classic stripe for so long, the wild print seemed just a tad too much. Instead I bought this one in Cocoa Village that, if I'm honest with myself, probably goes too far to the side of cute. 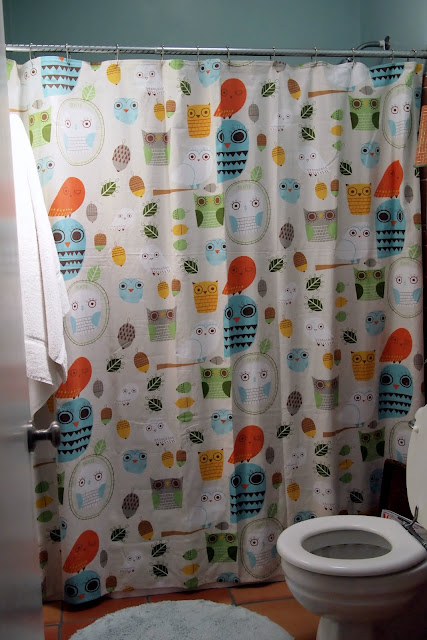 Still wondering if I can live with it!

We had some very unexpected good news around these parts that I've been meaning to share. About two weeks ago, as I was going to the mailbox, pictured here blown down by the weekend's sever winds, 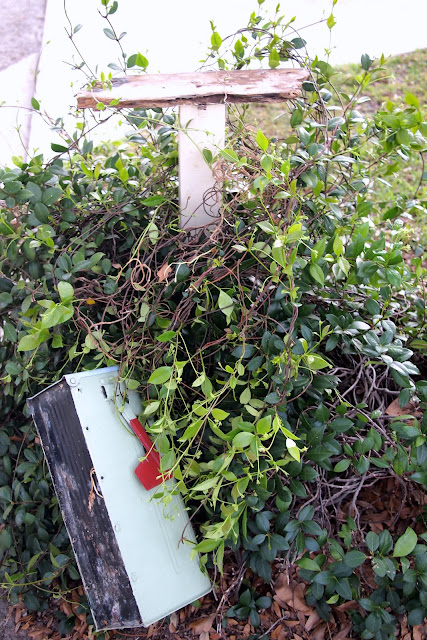 a white Orange County Code Enforcement truck pulled up. I asked him what was going on. Apparently he was in our neighborhood for some other reason when he saw my next door neighbor's truck alongside his house. I tried hard to conceal my glee. You see, for the last, maybe ten years or so, he has had this ungodly diesel truck that he hauls vehicle engines in, basically parked outside our bedroom window. Perhaps I've mentioned before how he left at 4AM two days a week, invariably waking me up? If that's not bad enough, he is hard of hearing so all his clanging and banging related to said truck, seems not to faze him. Because our weather has been so glorious we've had open windows for months now so you can see my problem. Moreover, because of it's huge size it was just plain ugly to look at. I have no idea what code he was breaking, aside from not being a good neighbor, but it's gone now. Wherever he's parking it now is fine by me!

A carolina wren, a red-winged blackbird and now a dove have all flown into the house this winter. Yesterday it was the doves turn. Bless it's heart, it was confused, flying first into the big window in the sun room before heading into the living room to perch on the television. Thank goodness for small favors that Bruce was home! Looking around he found a box that he eased the dove onto and walked slowly towards the open side door. 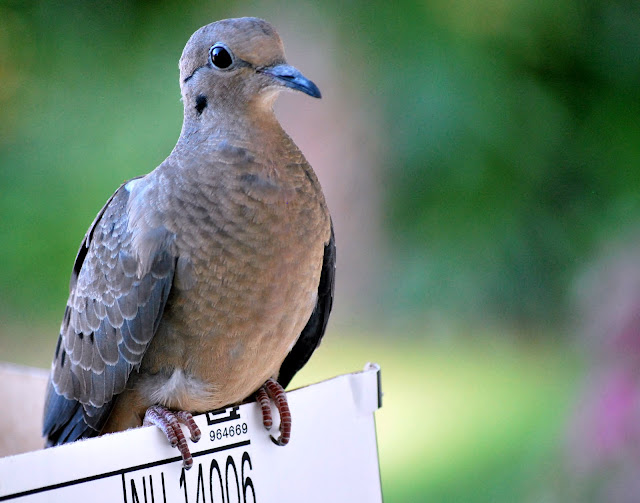 I took this moments before he flew away, no doubt hoping that would never happen again!

He was eating contentedly at what we are calling the "house feeder" as it is hung from the eaves just outside this window: 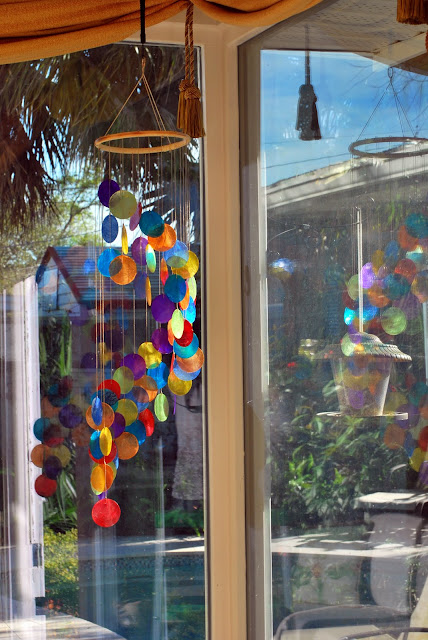 And there you have it--another nice little purchase from our Sunday excursion. I love how it reflects in both windows and of course I'm a sucker for how colorful it is. The tinkling sound it makes is nice as well!

I don't know about you but I sure have a hard time finding appropriate rugs. I may now have solved my problem after finding this rug: 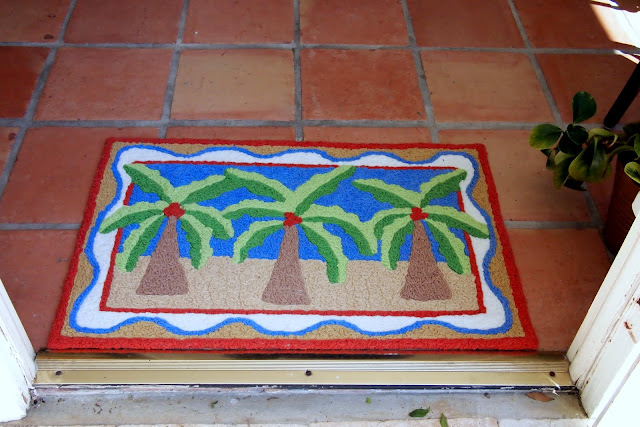 My only problem was trying to decide if the palm trees should face in or out! Jellybean is the name of the rug line. Made of 35% recycled soda bottles, or so I'm told, the packaging says it washed better than your favorite pair of jeans. With all the mess outside I was delighted to find this at the little shop in Cocoa Village. Because I rarely shop anywhere besides Marshalls, Ross, and Nordstrom, I just haven't seen what's out there. Apparently more than I realized! It feels great on my bare feet and for sure I love how vibrant it is.

A mess indeed. The high winds tore off not only the brown "furry things" from our neighbor's oak tree but new leaves as well. Only a few days ago I had the pool looking beautiful only to have it fall prey to the wind. 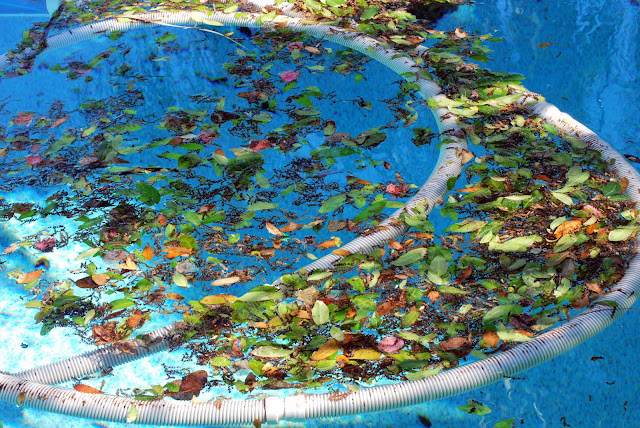 As of this morning it looked great, but once again we're having windy conditions which I suppose only makes sense as it is March. Who knew daylight savings time was coming up again? Not this blogger. I'm avoiding looking out back! 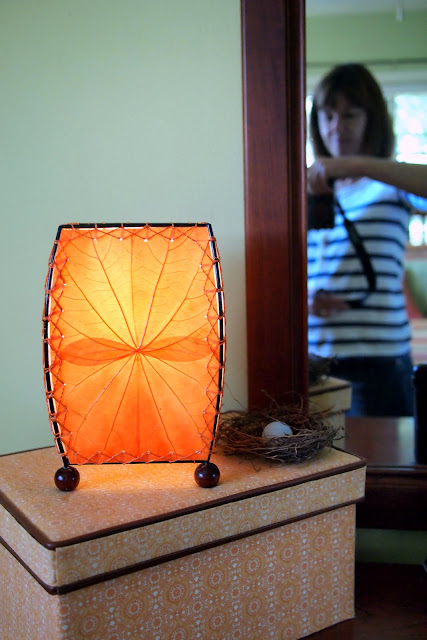 Here's our cute little new lamp made from leaves. Orange naturally. Don't be fooled by what looks like a bird egg next to the lamp; the nest is for real, the egg not. 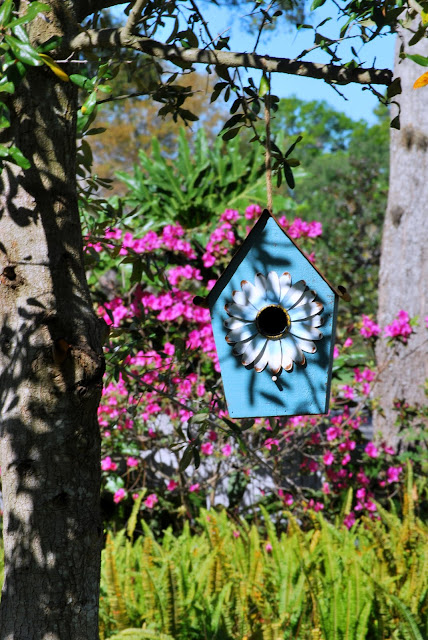 More azaleas Gail? Why not? Old Orlando is all aflame in pink these days and frankly, I can't get enough of it. Our new oak which is now home to this little bird house has not lost it's leaves. We keep wondering when it will happen because the majority of the oaks are sporting their new spring green coats. 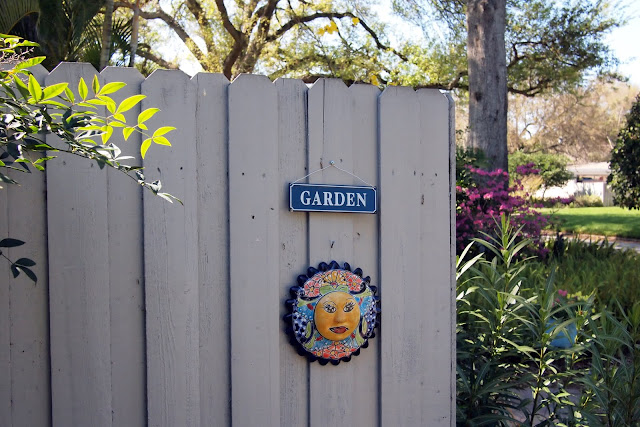 Last, but not least, is a new little companion for our garden sign which we bought last summer in London. The new piece is from this side of the Atlantic.

In my spare time, which there seems to be little of lately, I've been reading a wonderful book, A Good American. I'm not sure what made me pick up this book about Missouri, written by an Englishman, but am I glad I did. In a word, it is sweet and not in a saccharine way. There's real optimism which is certainly rare in literature. I'm nearing the end and wish I wasn't because it's been a really long time since I felt I could recommend a book. I came across this blog entry from Alex George, the author. If you don't have time for the book at least read the post because it is darn good! I keep wondering if there's any way in the world that this Oxford educated Englishman who practiced corporate law in both London and Paris might have once worked for the firm that employs Matthew. Now wouldn't that be something?

I also came across this piece about phone typing made easier from the NYTimes. Information I can definitely use, however, I'm getting a little better all the time. Not that I use it that much. People would laugh at my phone bill because I'm using up maybe a quarter of my allotted usage plan.

Yikes--where has the afternoon gone?? I must leave immediately to see Miss Monica about my hair. I'm such a procrastinator when it comes to my hair, it needs some serious attention!! 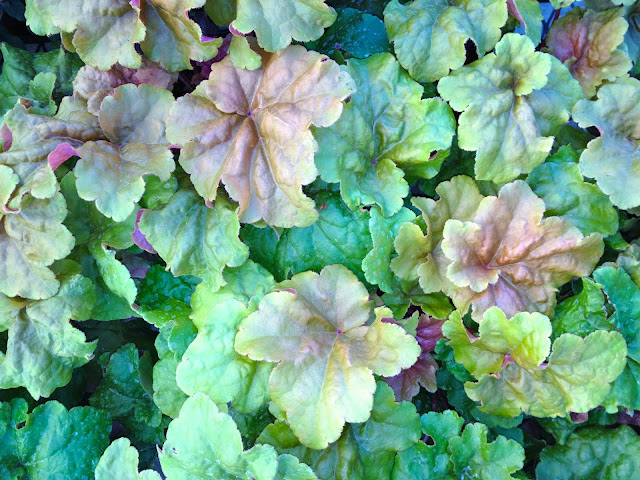 Just thought I'd end this with something pretty taken using phoneography,

Gail Peck said…
Karen, I'm looking for one for the kitchen now because already I can see that they seem like winners.
March 7, 2012 at 7:29 AM