March 12, 2012
You might think to yourself that it is no ones fault but our own that creatures have been making their way inside our home and you would be right to presume that. Many years ago it would have been unthinkable to leave doors wide open, however, not because of birds, but flies. Oh my, they were, in the words of my late mother, "as thick as thieves" around these parts. For whatever reason this is no longer the case allowing me to leave both the front and back doors wide open during the lovely weather we've experienced this winter. Plus, the optimist in me thinks that rarely things go wrong. I'm not a complete fool, but mostly I look on the bright side of life.

I was not thinking bright and happy thoughts when I walked into the sunroom Friday morning and discovered a large toad on the floor near Bruce's briefcase. YIKES!! Quickly shutting the French doors so said nasty toad would remain at least in the sunroom, I went to get you know who. He was still showering but promised to get there ASAP. Although I proposed a jar to rid said sunroom of the toad, Bruce gently picked him up, even pausing long enough for me to take photographs. 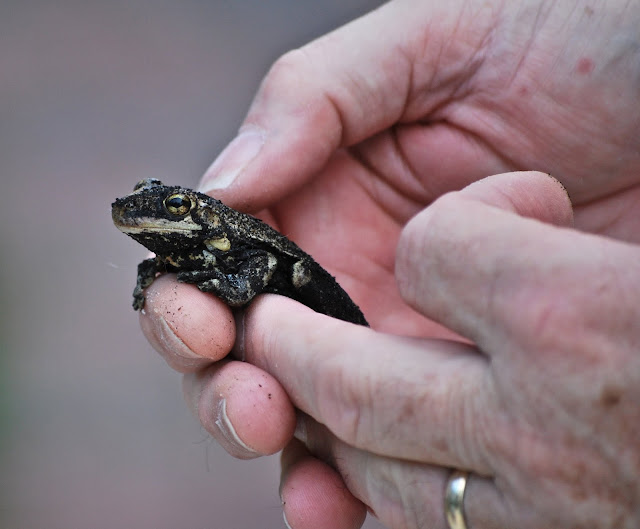 According to Bruce the toad must have been burrowing in the dirt because he was covered in it, making him far less attractive than normal. I know some folks think toads and frogs are cute, and in fact, I do have the toad swimming in the pool photograph hung in our hall bathroom, but a photograph is one thing, in the flesh--not so much!

Once the toad was safely in the backyard, and the back door firmly shut, we finished getting ready for our day trip to Gamble Place in Port Orange. The weather was a bit dreary as we left but improved throughout the day. Because we arrived about twenty minutes before the gates opened we took a look around Cracker Creek, the adjacent property where they rent canoes and kayaks. As we got out of the car the first thing I saw was a male peacock on the front porch rails. As is often the case, once you have a pair, they multiply pretty quickly. We ended up seeing at least a dozen peacocks, or I should say mostly peahens, with a few peacocks showing off in the mix. 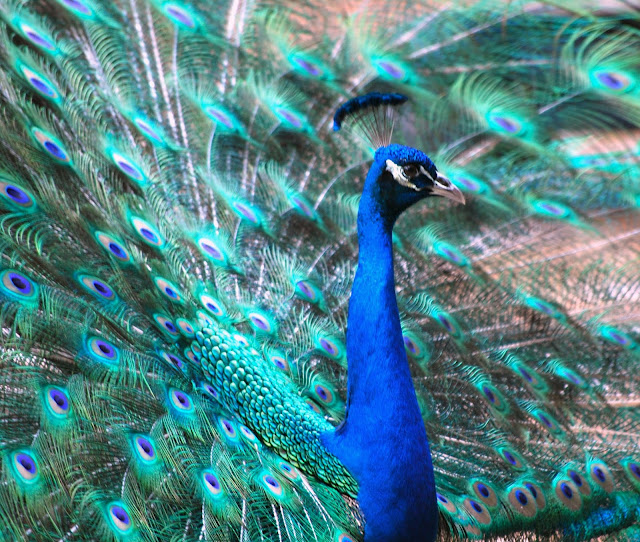 This peacock had such lovely coloration! They offer a one hour pontoon boat ride at 11:00 down Spruce Creek which we decided was just the thing to do after visiting Gamble Place.

GP was used primarily as a hunting lodge for the Gamble, of Ivory Soap fame, family. Apparently there was a mansion in Daytona Beach where they slept, making day excursions to the creek. At one point (1938), one of the heirs of James Gamble was so enamored of the new Walt Disney film, Snow White, that he had an architect build a replica of the Black Forest cottage as seen in the film. 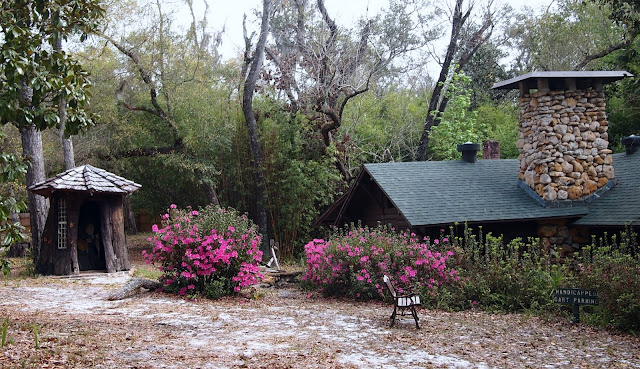 To the left of the main building is a burned out cypress tree trunk used for the witches hut! As you can see the azaleas were in full bloom and not just adjacent to the cottage but huge bunches of them everywhere. 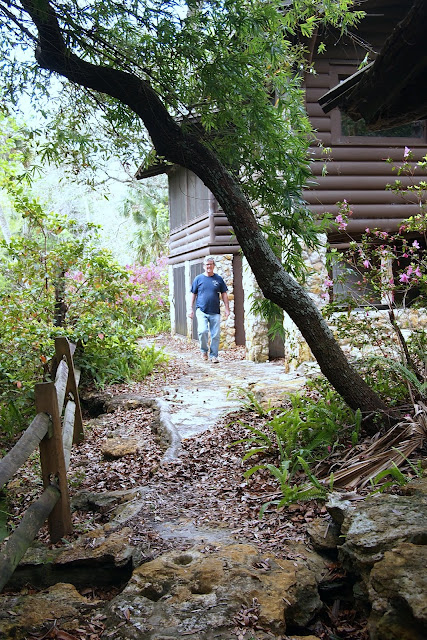 Bruce was amazed at the quality of the workmanship on the cottage which was much larger than I'd expected. A playhouse was it's function. Meandering the property, we took in what we could, however,  because the boat tour time was quickly approaching, we didn't see a lot of the place in depth,  but enough to imagine why he chose the location for a summer retreat.

The family that now owns Cracker Creek named it that because, as we saw in a demonstration after the boat ride, the sound of the cow whip makes a loud crack, and I do mean loud. To put your mind at ease, it turns out the whip was used not to beat the animals but to give them a scare so they would keep going during cattle drives. Captain Jim demonstrates the technique: 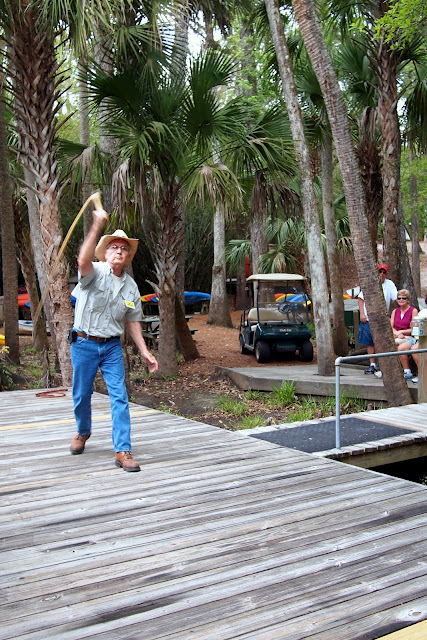 We learned that the incredibly loud crack comes from the whip breaking the sound barrier. And now you know the origin of the nickname, Florida Cracker! The boat ride was lovely with soft breezes under partly cloudy skies. We saw a few juvenile alligators sunning themselves on the banks much to the delight of the other guests who were visiting the area for Daytona Bike Week from parts up North. 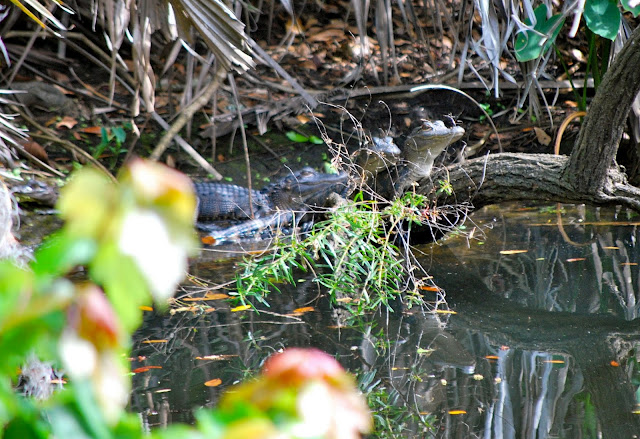 At this size they look kind of cute don't they? As well we saw some newly blooming air plants clinging to the old oak trees amongst the Resurrection Ferns. 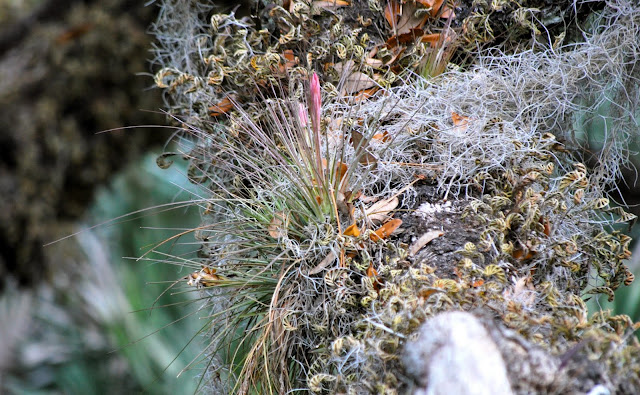 All those squiggly brown things are the Resurrection Ferns which according to our very knowledgeable guide turn bright green after a rainstorm.

During Kate's funeral Bruce mentioned he'd have to take more photographs of me if we were to do a slide show at my funeral. He started the project on the boat. 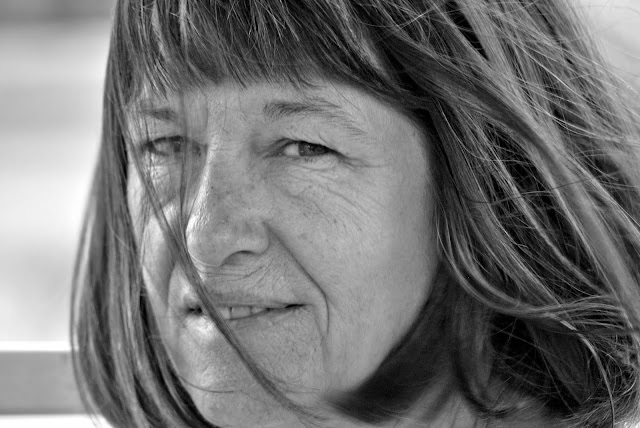 No makeup!!! Bruce convinced me I didn't need it, however, I think he doesn't see what I see. :-)

The azaleas were really breathtaking with a gorgeous shade blooming that I can't recall seeing before. 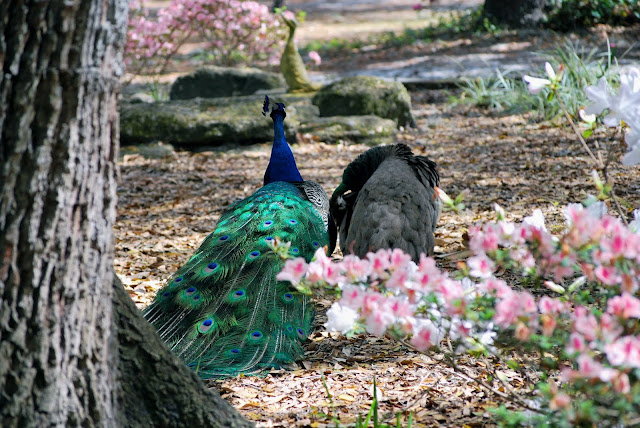 After lunch at their picnic tables we headed North towards Ormond Beach to visit The Casements, the winter home of John D. Rockefeller. Driving through Daytona Beach was pretty interesting with all the bikers just arriving. I asked Bruce, what exactly do they do for a week? It remains a mystery. By now it was raining so the volume on the streets was naturally diminished.

Joining a tour underway, we unfortunately didn't get as much background information as I would have liked, but that's why we have the Internet isn't it? 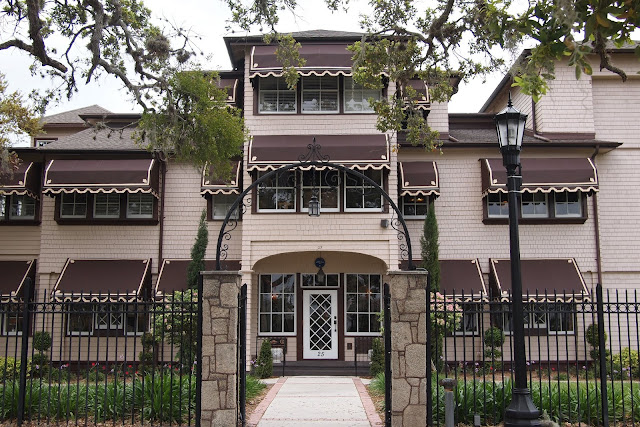 According to Wikipedia the house was named for the casement windows which are absent these days; mostly hurricane damage through the years. Amazingly the top floor holds a Boy Scout museum and a Hungarian Costume museum. Weird, I know.

The Boy Scout Museum was begun as an Eagle Scout project by a local young man in 1980 and it's been housed there ever since. The collection of memorabilia is really astonishing including this final letter to the Scouts from the British founder of the movement. 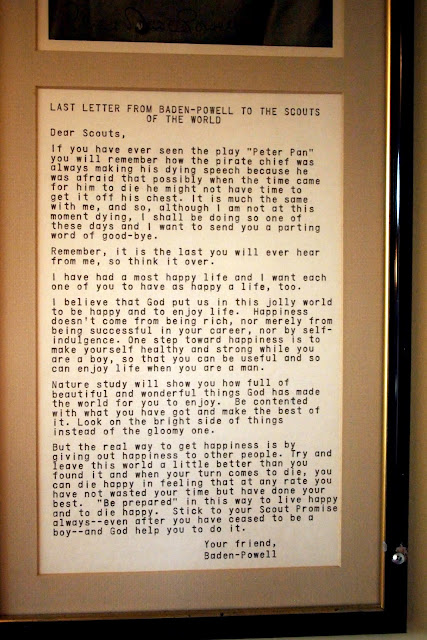 There were uniforms from every era prior to 1980, and when I tell you it was really well done, you'll just have to believe me. 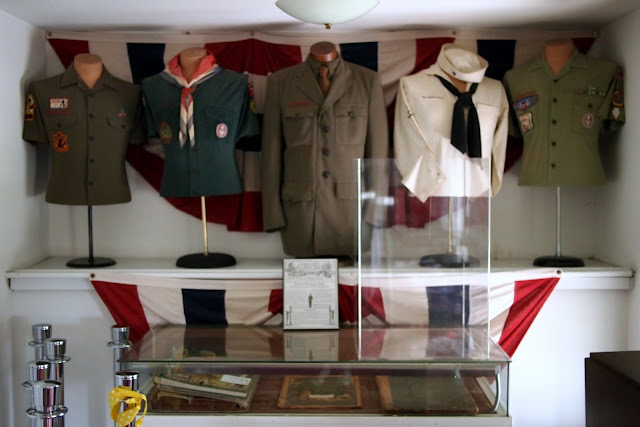 Bruce was a Boy Scout for a long time and his brother Cris went onto become an Eagle Scout. Those knots Bruce uses to tie down my tent every week--the Boy Scouts. Being prepared for anything--that's the Boy Scout motto! 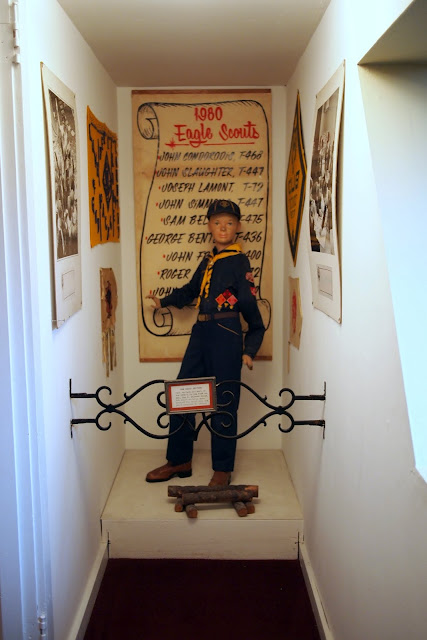 The other folks on the tour weren't as interested in the Hungarian costumes so we made a quick run through of that room. 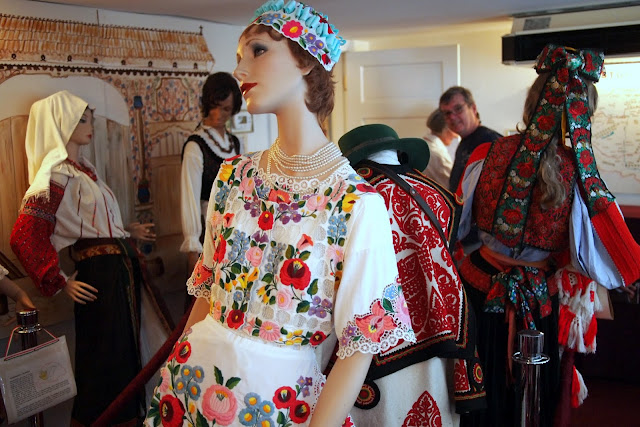 So, all in all, it was a terrific day trip. Of course any day I get to spend with Bruce is terrific, but then again, that goes without saying.

When you've lived in Florida most of your life it is easy to take it for granted, however, there is so much to see and do that it's really no wonder people the world over come to Florida to both live and play. The last few years have really opened my eyes to the wonder that is Florida, despite the heat and live creatures that come into our home uninvited!

SantaMonicaDee said…
What an unforgettable excursion! I feel like I went along. I know about the Gamble family home in Pasadena, CA, but didn't know about one in Florida. I guess I shouldn't be surprised they'd have homes all over the U.S. The peacock photo is quite beautiful. I had the thought that creatures who come within the proximity of your camera lens know you'll click their pic so they show off their best. ;-)
March 12, 2012 at 6:20 PM

Gail Peck said…
Thank you Dee for commenting. Bruce and I visited the Gamble Place home in Pasadena while he was building an Olive Garden in Burbank. We spent a week in SoCal, staying in a different city each night including your own Santa Monica.
March 12, 2012 at 7:32 PM