August 02, 2012
Yep. That was me almost all of my waking hours yesterday, except, of course, for my bike ride. Who knew I could watch so much television?

Vicariously, I celebrated and cried with the athletes as they won or lost big. The Great Britain women rowers were terrific and what a joy to see the home crowd cheering them on, as well as the cyclists along the water following the race. According to Matt, the water polo matches he saw were fairly sedate. As a spectator I was anything but sedate watching the American women play against Spain. How incredibly strong those women must be to not only swim back and forth, pass the ball one-handed, AND tread water! Our women's volleyball team is fantastic aren't they? Archery, who has ever watched archery? It was heartbreaking watching Brady Ellison fall apart against his opponents. Before his semi-final, NBC ran a little piece about him which was very fascinating. He explained that six days a week, from 8 in the morning until 5 in the evening he shoots 300 arrows a day! Some days the count runs up to 500.

For most of the day I sat there like this cat I found watching the world go by on my bike ride. 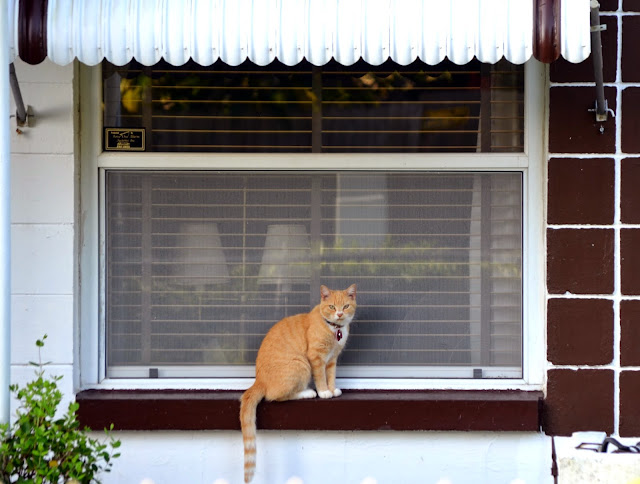 Except I sat there with my guide in hand, switching back and forth between the channels to see as much as I could see. When Nathan Adrian won the 100 freestyle race my heart soared! Because Matt swam in high school, I have first-hand knowledge about how hard it is to become a world class swimmer. High school students practice twice a day, before school, beginning at 5:30 in the morning, followed by an after-school practice of several hours as well. I remember a few super cold meets when just the thought of jumping into an ice-cold pool gave me the shivers.

Bill played volleyball in middle and high school. If only his attitude matched his skill set! I was so darn lucky that, while having four teenagers at the same time was no picnic, it could have been oh so much worse. Fortunately for this Mom, Bill was the only one who gave us fits. He was invited to play with a club team which is where you get really good, but alas, he petered out. Calling me the other evening, he said, while watching one of the Olympic matches it brought back memories of a time in middle school when he missed the final shot of a match, crumbling onto the floor in disappointment. Watching from the stands, my heart broke. That's part of sports, but oh how painful it is. I felt the same for the parents of John Orozco last night when he struggled on the pommel horse. (-:

Eventually I got off my behind, heading out back to do a few chores. Sadly, while out there, our man in London called to tell me about all the excitement. By the time I discovered the call it was far too late to call back. Instead, he was kind enough to send along some observations that I think will interest you as well.


Hi Mom
I tried facetiming you last night, but I didn't get an answer.
So as far as the Olympics as concerned, things are going great. I feel like the operations so far have been so well executed, and people are enjoying it loads. The venues look great -- the permanent structures are gorgeous, but even the temporary ones are nice. The crowds have been fantastic. They are really supporting the Team GB athletes SO vocally, which is cool, but there are lots of Americans here, so that's fun. We saw a US team at the beach volleyball, which was great, and I think we're seeing the women's basketball team on Friday night. I'm really looking forward to that. (Also maybe the men's volleyball team on Monday? I can't keep track so well.) The park is gorgeous -- the plantings of flowers are so beautiful people have been taking pictures of them. I have some on the camera, but I haven't had a chance to unload them yet.
Tom is doing well. So far transport has run quite well, and the forecast mega-delays haven't really materialised. People seem to be adjusting their commutes, and vehicular traffic is down in central London by around 25%. All of that is good. There haven't even been massive problems around the various road events. I'm not sure if you've watched any of the cycling, but the crowds lining the streets have been huge, which is great. There was a sort of general ennui before the games started, but it has pretty much evaporated, and I think yesterday's British gold medals will do even more to reduce any hesitation.
In short, I'm really loving it, and I will try to put some pictures up soon.
love
Matt

As the evening hours came on I noticed out the back windows that the sunset looked mighty fine so I scooted down the street to my neighbor's back yard: 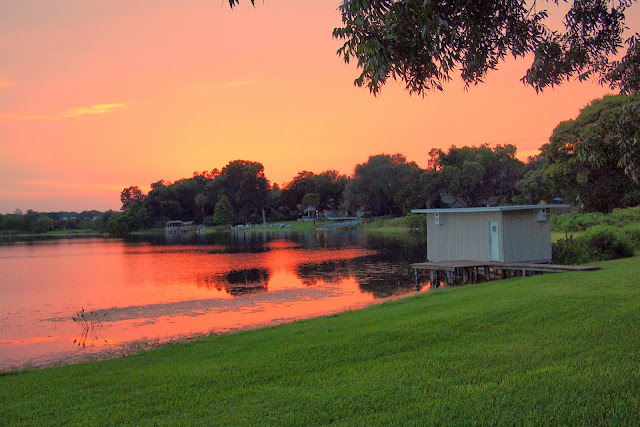 Beautiful, right? What followed was pretty darn awesome as well.  Did anyone else see the gorgeous full moon, which I learned last night is one of two this month? August 31 will be a "blue moon." 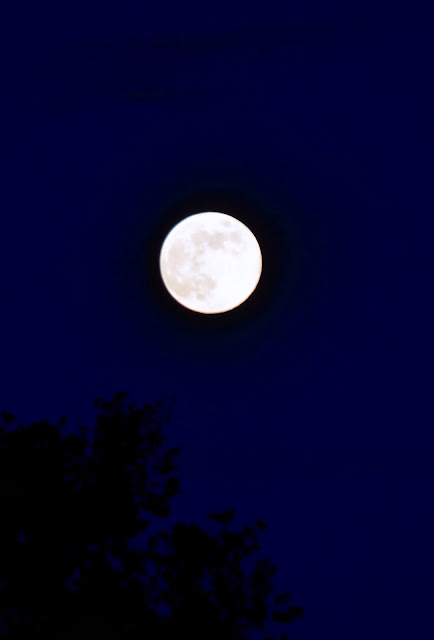 I kept thinking of the saying, "shoot for the moon!" Actually I am terrible at stuff like moon shots, so I thought, no problem, I'll take one in the morning sky of the first full moon in August. It was not to be as the sky looked like this as I rode this morning. 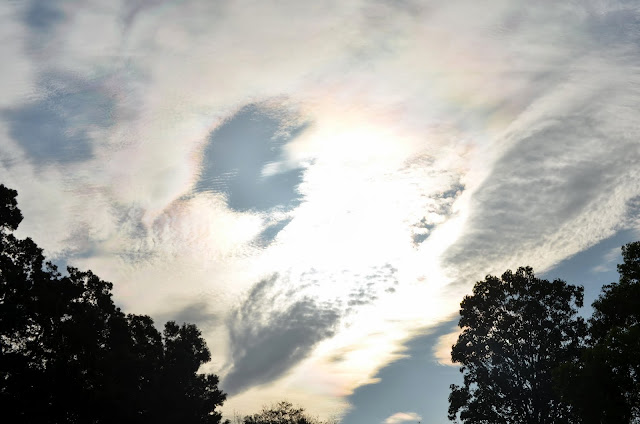 As the day wore on, the sky cleared, giving great credence to the "red sky at night" maxim. In fact, we are having very little rain, and as I look out my office window, not a drop of rain seems imminent. I can safely say that this month I will not have a repeat of the amazing $19 water bill from last month.


The Olympics are calling my name...

Anonymous said…
I saw the Full Moon last night - Outstanding! I'm so excited to know about the Blue Moon August 31.