March 13, 2013
Do you think Mama Cardinal looks pregnant yet? 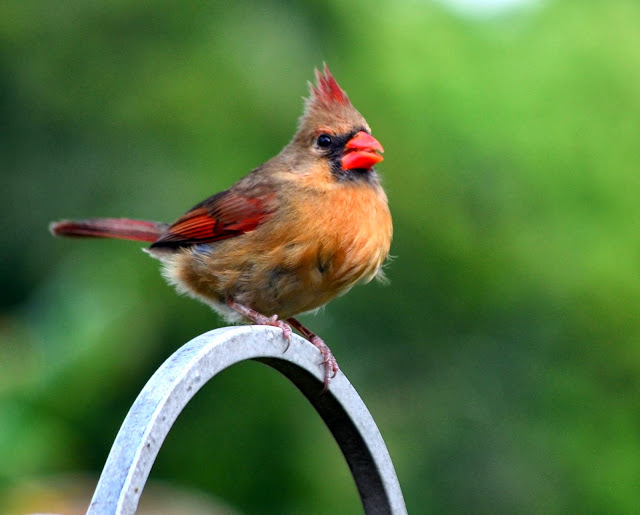 Isn't she adorable? Although I thought the recent visits to the Nuttery a few weeks ago signaled nesting season, to date I've been wrong. However, with a blog history such as mine, I see that it shouldn't be long until, once again, I'll be peeping into the Lady Palms, looking for a nest!

I wish I could tell you that Mr. Bruce is excited about his pending retirement, but if I did so, it would not be the truth. What he is feeling is more along the lines of "what will we do without a steady paycheck?" I keep reassuring him that we will be fine just as we've always been. If we had lived our lives waiting to do things until we had money we would never have had four children I can tell you that much! In the spirit of what I've just told you, I am now having to adjust myself to having another frugalista in the house. One is more than enough! Whereas before he hardly looked at the price of a purchase, now he's doing some comparison shopping. Just last night he returned from Wal Mart with some bags of Smarties, the candy I give out when I'm out selling. "Do you know how much I got these for?" Yep, I do because that is where I prefer to buy them when they are in stock. Lately, however, I've had to resort to Walgreens where they cost about 75 cents a bag more which doesn't seem like much, but when you give out as many as I do, it all adds up.

While Bruce does still have a paycheck we are getting things done. Among them was the eye exam we both had at Costco on Monday afternoon. I'm still good to go, his prescription has changed a little bit. New glasses are in the works. I'd made arrangements with Sarah to stop by Sun Dance on our way so Bruce could see the operation. I knew he'd be just as impressed as I was when I took the tour some months ago. Graciously, we were shown around the facilities. Here a guy is using some sort of cutting machine: 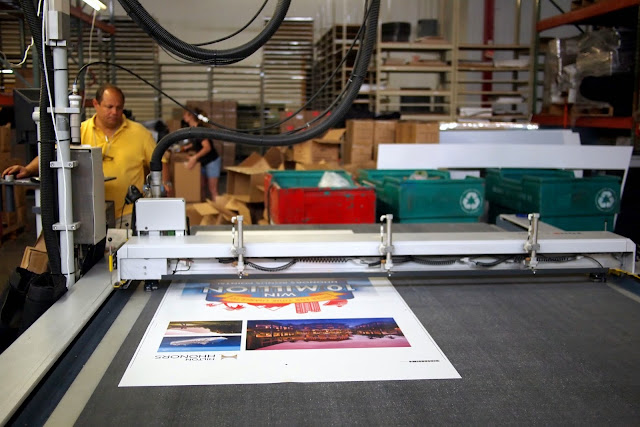 And here, pictured on the upper left, Sarah is showing him some of the products they produce: 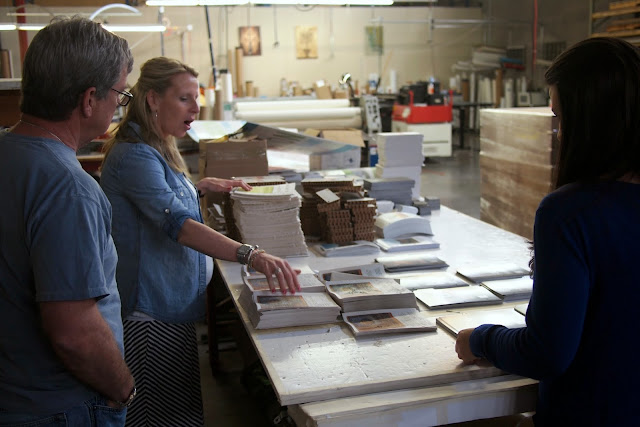 Sweet, sweet, Alejandra is pictured on your right. As you can see Sarah doesn't have long until her next baby is born!

My sunglasses broke on our way to Costco. Well, more accurately, while pulling them out of my handbag they broke, so we stopped at Ross on our way home for a replacement. Except, in our new shared frugal existence, I bought four pairs for the price of one. 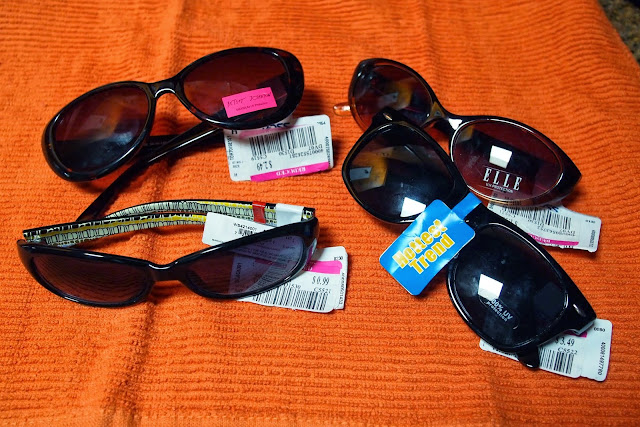 Seriously, can you believe how cheap they were? Who has ever heard of a pair of sunglasses for 99 cents?? This little $9 purchase should last a long time!

This is sounding really kooky isn't it?

With nothing really in mind for dinner, I looked around the kitchen to see what I could fix. Why, how about cabbage soup? 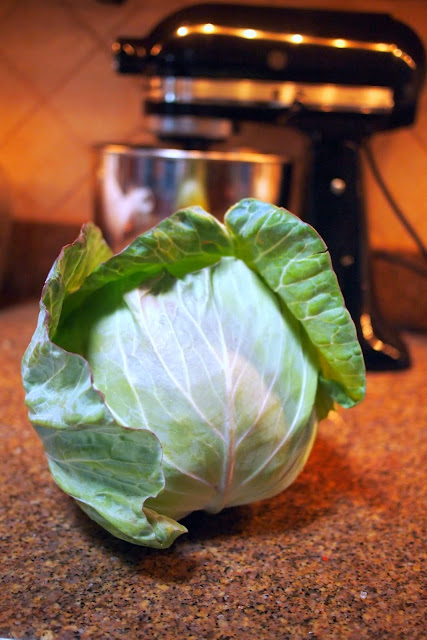 Kathy, our market neighbor, asked if I wanted a cabbage from their garden on Sunday. Apparently, they are nearly cabbaged-out following their bountiful harvest. As a child I hated cabbage with a passion. Why? Our school cafeteria cooked it to death, basically turning it into green slime. And then there was the smell! That said, somewhere along the line I tried cooking it myself, and I fell in love with cabbage. This is my first attempt at cabbage soup, and by golly it was pretty darn tasty. 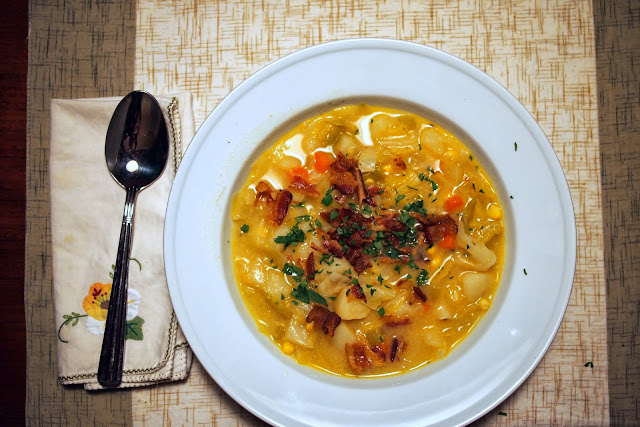 Potatoes, some left over corn, diced carrots, along with some celery and onions gave it more flavor. This would make a nice vegan meal had I not put the chopped bacon on top. A rainy, dreary day, made it the perfect lunch yesterday.

And the frugal ways continue as we leave in the morning for a little overnight camping trip to Gold Head Branch State Park in Keystone Heights, Florida. Never heard of it? Neither had I until Bruce found it in one of his books. Four years have passed since our last camping adventure which is just plain shocking to me. It is going to be super cold however, as in overnight lows in the middle 30's! Once again we are going to sleep in the car which sounds super weird, but isn't. The Element was comfortable, the Pilot will be more so because it is roomier. Using the little mattress from our fold up bed, we'll be nice and cozy. The cost for the campground? $20. The gas will cost way more than that! Despite the cold, I'm looking forward to seeing a part of Florida that neither of us have ever visited before.

In not so frugal news, our bike rack did not fit the Honda, thus a spiffy new one that hooks into the trailer hitch made its way to our driveway yesterday afternoon. I can hardly wait to ride my bicycle on the small hills there, in what should be brilliant sunshine, and coolish temperatures. Sounds perfect, right?

Trying to remember how we did use our old bike rack that time, I went back into my photo library to check it out. While there I found this photograph of what our home looked like back then, before the tree had to be removed. Made me a little sad... 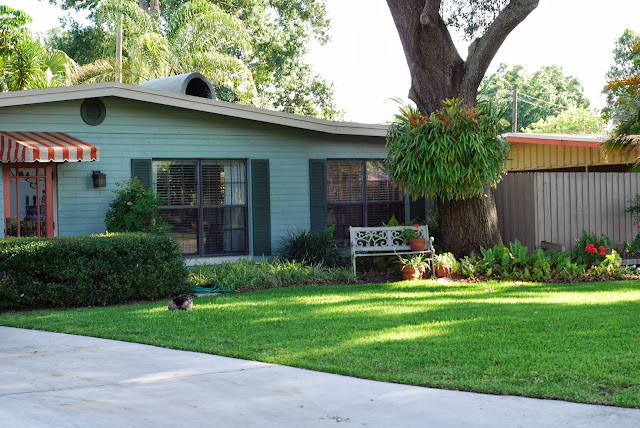 Of course, had the tree never been removed, I would not have my bird obsession because the tree was so gigantic I never could see what they were doing up there. Although I was tired of that color scheme, looking back on it now, I wonder why?

I'm sick of this frugal stuff, aren't you? Let's do some nature shall we?

Just when I thought I would never see my eagle again, Monday morning, as I was nearing the home with the tree, he flew right over me!!! Parking my bike in their driveway, I ran into the backyard to get a shot. He did not stay for long, taking off for parts unknown. 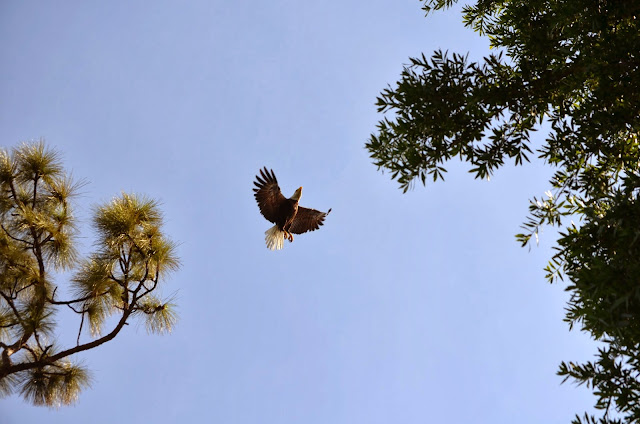 In my last post I mentioned my gerbera daisy, but did not show you the evidence--well, here it is: 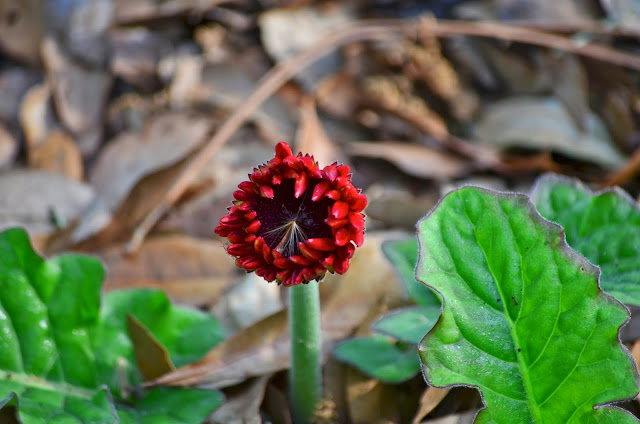 Lo and behold, here's what it looked like after yesterday's rain: 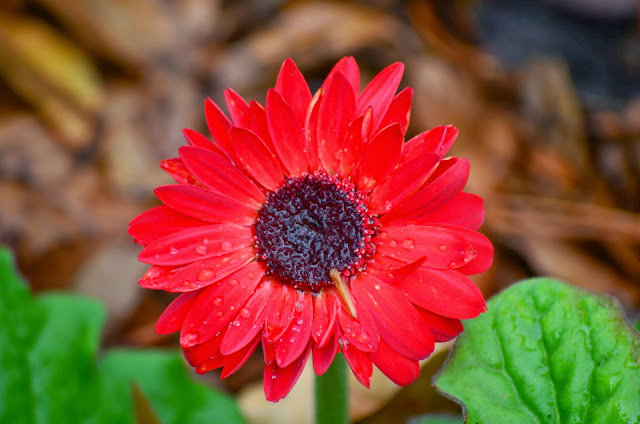 I'm pretty darn excited to tell you the truth because I thought it would never bloom again!

Most of yesterday afternoon was spent signing prints, new ones, and replacements for those sold. Here's a stack which represents what I sold over the weekend. 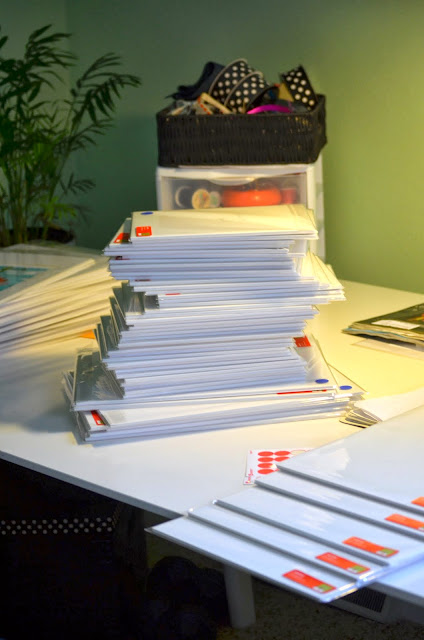 Unbelievable. Who knew I could make something of this? As we were leaving Sun Dance Bruce remarked that they all loved me. "Really, is that the impression you got?" It is all like a dream sometimes....

I've made a little fun of our frugal ways, but really, it is the smart thing to do, whether you have a steady paycheck, or not. Using resources at your disposal, re-using, smart shopping, these are practices everyone would do well to adopt; perhaps our economy wouldn't be in the mess it is, if, both private citizens, and our governments got into being frugal!