A Couple of Bee Stories

August 06, 2015
In a strange coincidence, yesterday morning I'd gone over to Bill's house to see the latest and greatest improvements going on over there. Mostly they involve some form of stone, his favorite material. While we were talking, he told me he'd had a little tour of the house across the street, recently purchased by a flipper. I'm not sure how long it was abandoned, but long enough that, apparently, going into the back yard was a dangerous proposition. According to the report Bill heard, 50,000 bees had taken up residence, and not only were they in the back yard, they'd made hives in the attic! The workers were scraping honey off of the ceilings, and there were giant honeycombs in evidence. Can you imagine?

Well, later in the day, while I was reading a new novel, the doorbell rang. It was a neighbor from across the street, one house down. She wanted to warn me that they had discovered a swarm of bees in the back yard, with an exterminator scheduled to come soon. Her real concern was the little dog that lived next door whose family was at work. I told her I thought there were people who would come and get bees rather than exterminate them. Well, as fate would have it, by the time the exterminator arrived, the bees were gone. I know you are breathing a sigh of relief.

A few hours later, I went back to Bill's to see the day's progress, and while coming back into our neighborhood I saw the young lady who has the dog mentioned above. Quickly she solved the mystery. Turns out the neighbor behind both of their homes has bee hives and they have swarmed in Ellie's yard on a number of occasions. Her solution is to knock on the bee keepers door; he comes and does his thing, returning the bees to their hive. She showed me a photo of them when they swarmed in her confederate jasmine. Oh my gosh!! All I can say is that I'm glad they haven't found their way to our yard!! Here are some photos I found online of swarming bees--the one Ellie showed me was like the tree hanging bunch.

So, how weird is that?

Complaining about the dreary weather in my last post, I am delighted to say that the sun has returned to it's rightful place.  I was so happy that I went riding early to witness it down by Lake Conway. 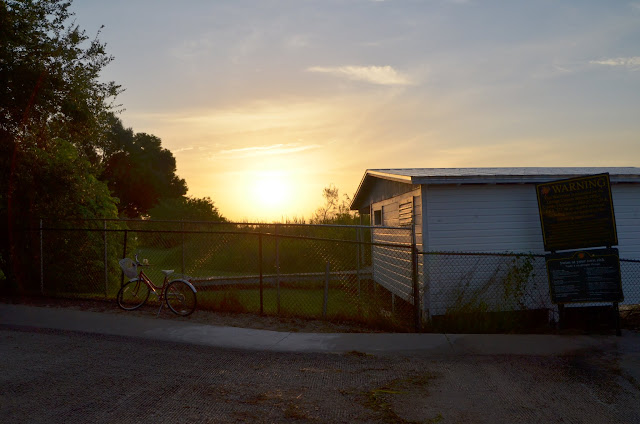 A beautiful sight indeed. With all the recent rains, the water is high, a fact no one is unhappy with. 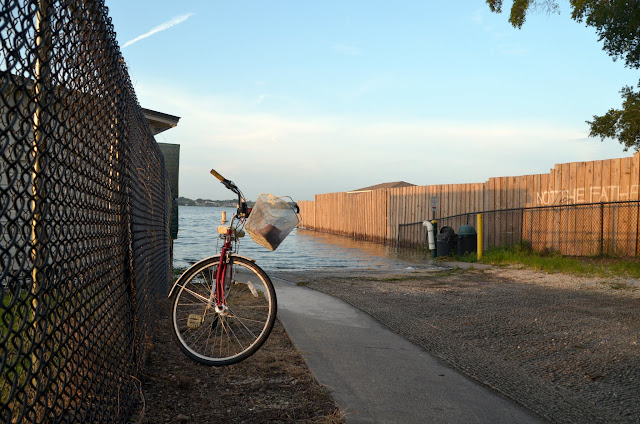 There is some bird news for those interested in our avian friends. What I thought was a baby woodpecker, I have now discovered is a Downy Woodpecker; a first for us. 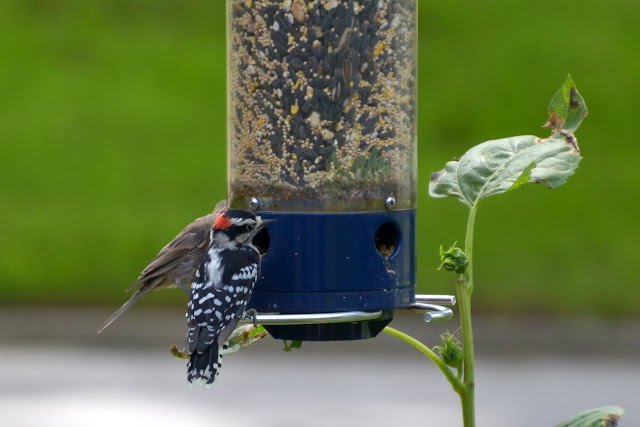 You can imagine I'm excited with this discovery. The above photo shows those silly little sunflowers coming off the stalks. Mostly they look terrible now that the major blooming is done, however, to date I'm leaving them be because the birds seem to like them as a perch while waiting their turn at the feeder. 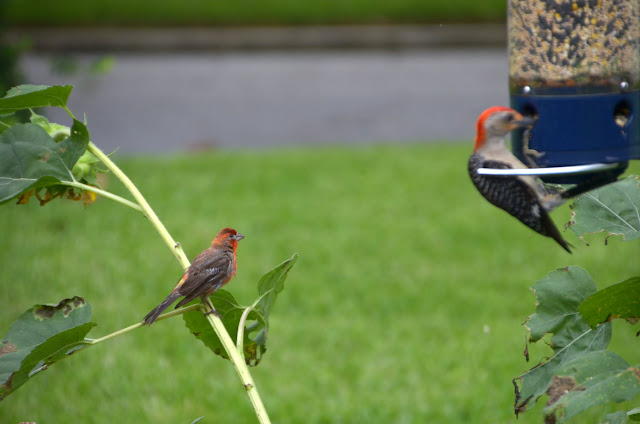 In case you are wondering that is a Red House Finch. As to the woodpecker on the feeder, that is a Red-bellied Woodpecker.

One of the female Cardinals is looking pretty rough these days.... 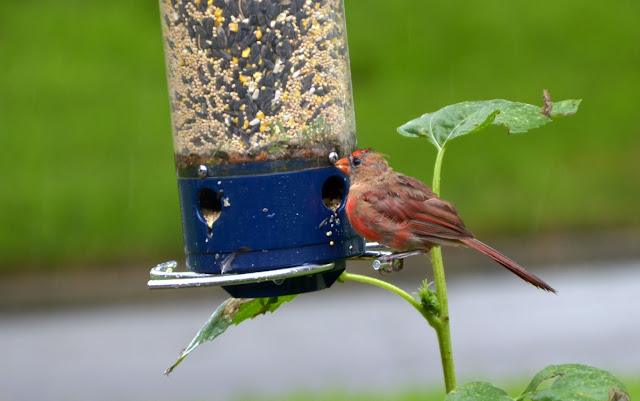 As are a few of the Red Winged Blackbirds. 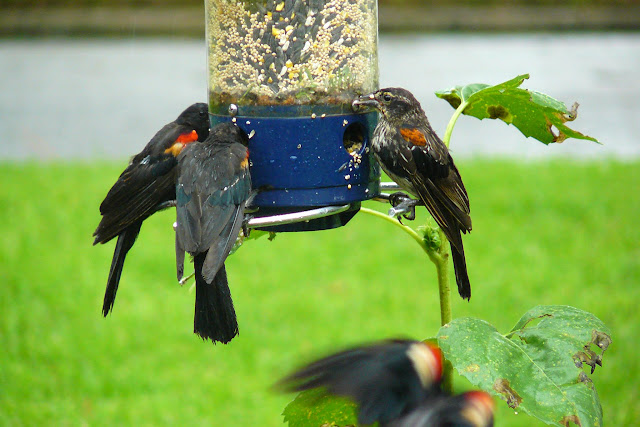 At first I thought it was one of the males losing feathers, however, looking at it now, I'm wondering if it is a female. What I do know is sometimes there are so many on the feeder at once that little confrontations break out. Especially around 5 in the afternoon. The other day there were three female Cardinals, two of whom I think are juveniles, five Dove feeding on the ground, six Red Winged Blackbirds, a Gackle, as many finches as could find room, and three Blue Jays. Oh yeah! A Brown Nut Hatch was eating the ground food as well. While searching for an image to identify the Red Winged Blackbird, I came across what first appears to be an oxymoron. A blog called, Hipster Birders. Can the two possibly co-exist? Apparently they can. Beautiful and interesting bird photos to be found on that blog.

In reading news, I must mention a novel by my new favorite author, Kent Haruf. Benediction is the name, and it is just as wonderful as the novella I read by him a few weeks ago, Our Souls at Night. If you like Anne Tyler, I'm confidant you will like his writing as well. Both are masters at making the ordinary extraordinary. Yesterday I picked up Eventide at the library because that is what they had; perhaps, because I've not found it on the shelf in two of the library branches, I'll have to order Plainsong to complete the trilogy.

My friend Karen Howard is not much of a bird fan, and in honor of her, after slogging through such a number of bird photos, here's a flowering plant which she'll like a lot more. 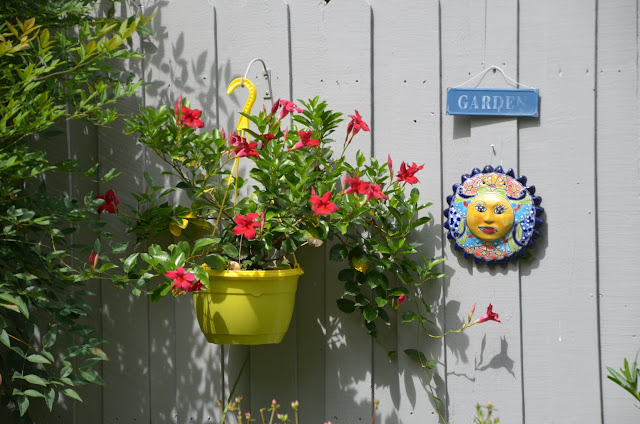 Although I was hesitant to buy a vine, I'm hoping that keeping it in a basket will curtail the spread. Florida and vines are often a lethal combination as once established they spread, and spread, and spread. That said, when I saw the reduced price of this Mandevilla at Wal Mart, I could not resist.

Further she likes clouds and I like a sunset so it's a twofer! 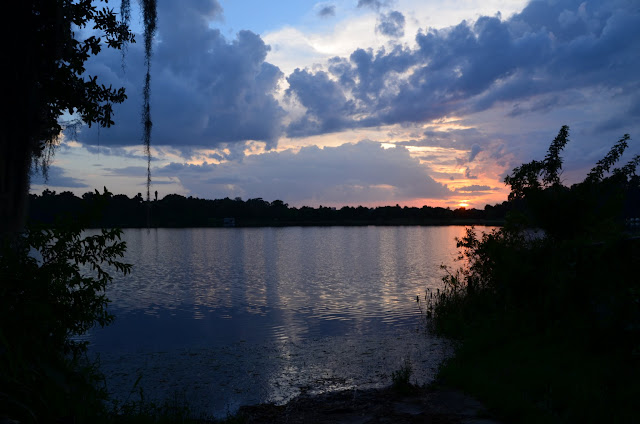 Not entirely a red sky at night but enough so that at 10:42 this morning, as I type, the sky is bluer than blue. That's all I need.

If you're wondering, Mr. Bruce is still away, probably coming home later tonight after four days in Virginia. It's nearly crunch time on the job; inevitably things are going awry more so than he would prefer with only five weeks to go before inspection. I'm confidant he will sort things out, solve the problems that come with the job, and everyone will soon be thrilled. It's just getting there that is slightly painful...

Nothing but blue skies,