How Do They Do It?

April 21, 2016
Whereas these days I am perfectly content to sit and sew most of the day, I do know that every now and again I should get out. As such, I went to Gatorland yesterday morning. While standing in line to buy my discounted Florida resident entry fee, I struck up a conversation with a young couple from Germany who were making Gatorland their first stop during their two week vacation. I was raving about the place and the fellow asked me how often did I come? A few times a year was my response. He then wondered if I got bored with it and I emphatically replied that I did not, especially during nesting season when there are hundreds of shore birds who are very easy to photograph, unlike my elusive owls!

Speaking of which, for nearly a week I searched daily, sometimes several times a day, for the owlets, and finally I found them about two days ago. Absolutely thrilled. Yesterday, no luck. So it was that when I rode up this morning I nearly crashed my bike as one of them was in a low tree in Nell's front yard. Looking mighty cute I might add. 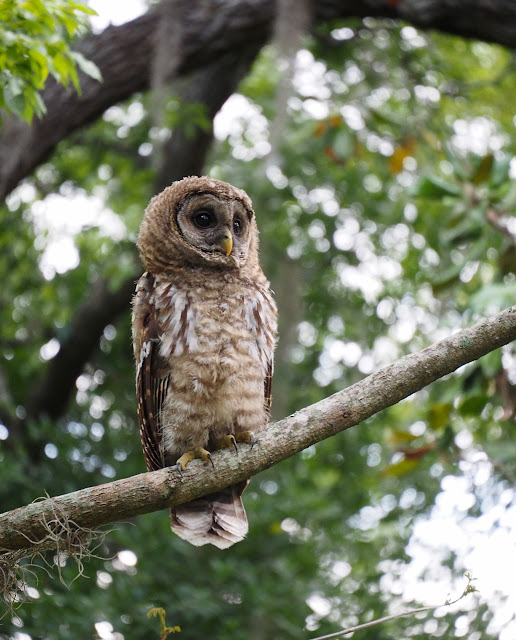 The sibling, who I think is the shy one, was above my head in the big oak overhanging her driveway. 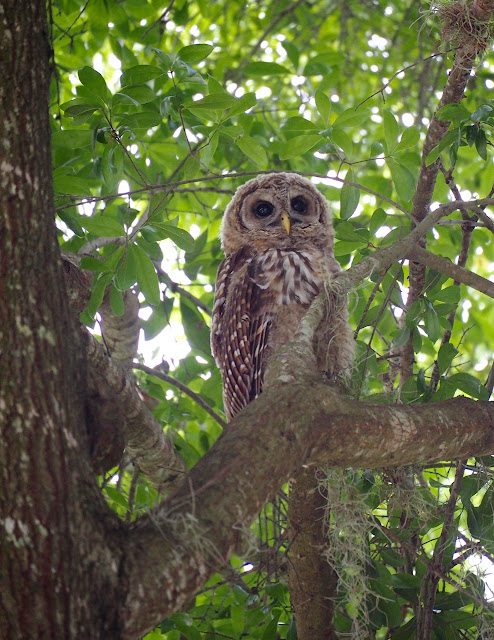 Notice how the chest feathers, the bars of their name, Barred Owl, are more pronounced on the one in the oak tree? There is a reason people are so keen on owls, and that is because they are so darn CUTE!

Before you read much further I must give you a warning....there are loads of bird photos upcoming, and should that not interest you, now is the perfect time to move onto something else on facebook!!

So, if you are from Germany say, or Nova Scotia as some other folks I spoke with were, seeing an alligator is really something. If you are from Florida like I am, you've seen one, you've seen them all. That said, it does always amaze me how the birds and gators coexist. 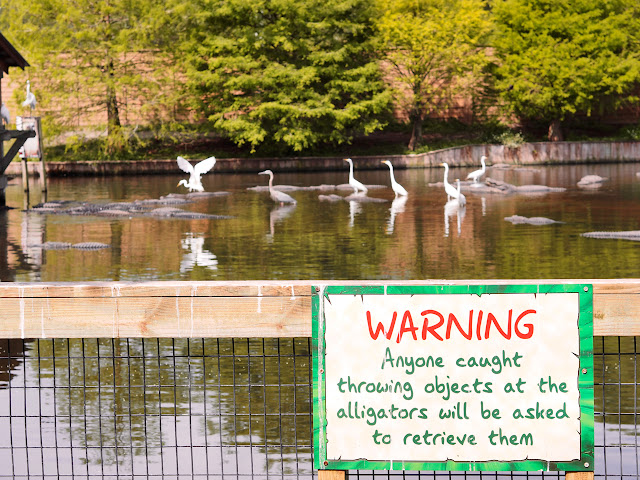 One of the things I so love about Gatorland is how corny it is and proud of it. Nothing wrong with that in my book.

You may be under the impression that I like all kinds of birds, and of the ones I've seen, which are but a grain of sand on the beach, what with 10,000 bird species to see in this world, the bird I find both ugly and fascinating, is the Wood Stork. The head and feet are what get to me. 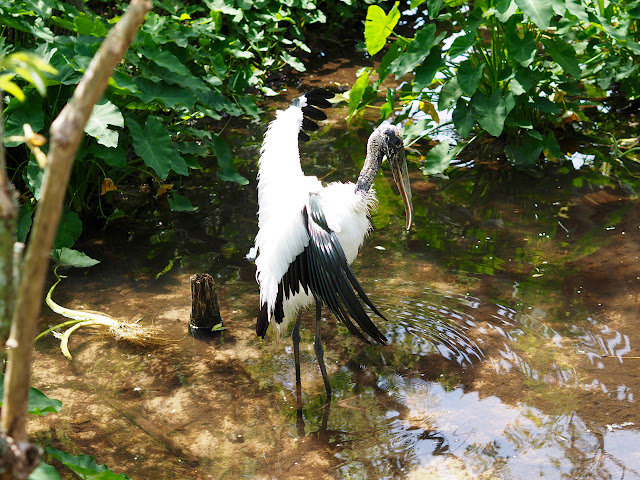 So, you can't see the feet in the photo above, but you do get a glimpse of their redeeming feature which is the blackish/green wing tips. Although the photo below is not entirely in focus, I'm digging it because of those wings! 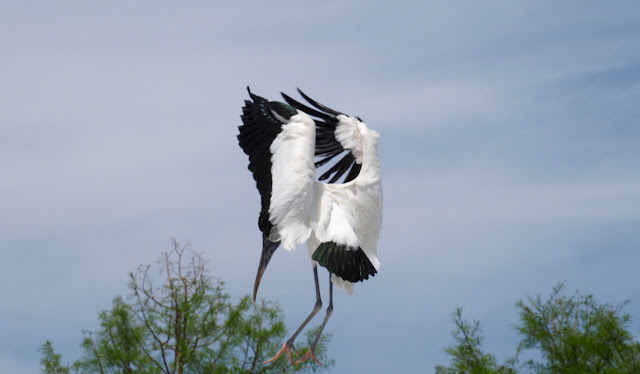 All manner of the birds were in their breeding plummage including this Cattle Egret. 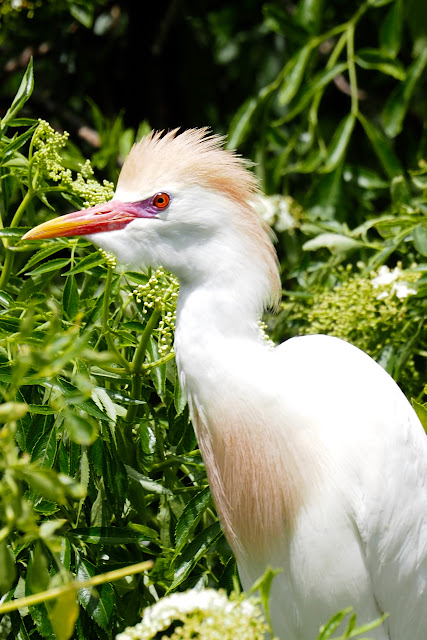 There are newly hatched Snowy Egrets still in the nest, 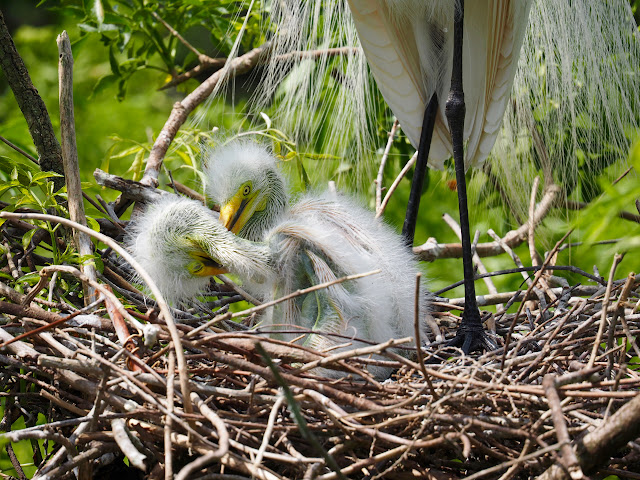 and while we are on the subject of Snowy Egrets, they are pure white birds that are difficult to photograph in bright light. Luckily this one was in some slight shade. 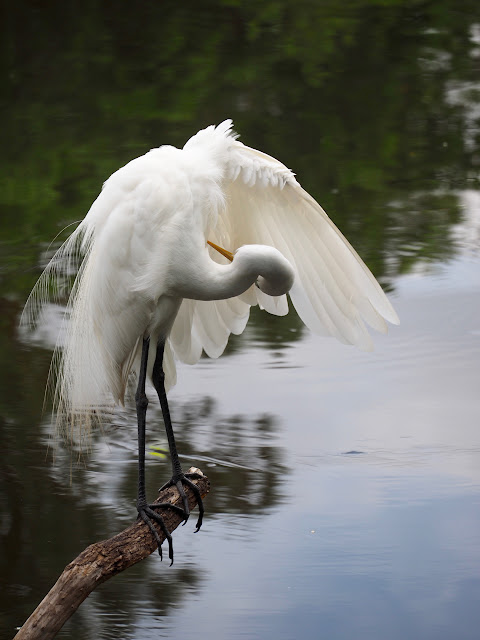 The day was way too bright for my visit, but that did not stop me, nor did it stop some male photographers who set up their giant tripods on the walkway...so rude. Their lenses were like, at least a foot long, so big that when I saw them finally moving out of everyone's way, they carried them on their back, AND in a stroller. Good grief!

Last year I saw many more nests filled with beautiful blue eggs; this visit only one and it was hard to focus on because they hide them. Well duh!! 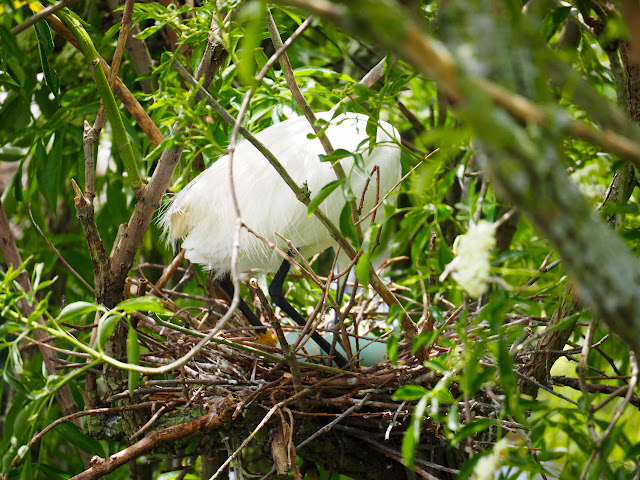 That said, the reason the birds nest alongside the gators is because the gators are only too happy to eat any bird egg predators. One of thousands of gators you will see during a visit there. 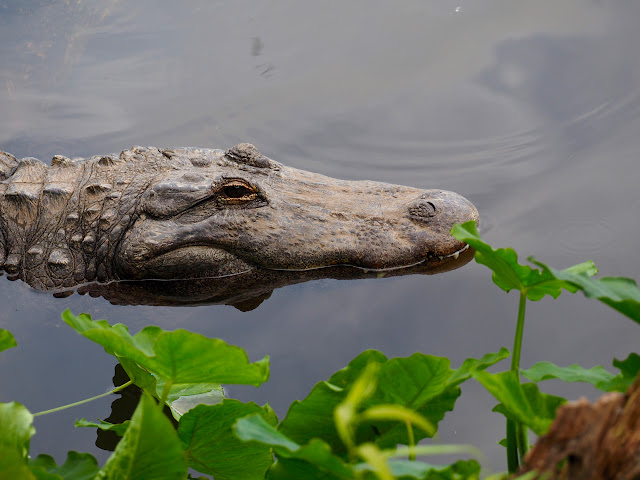 Plus, there were a ton of vultures which is another bird with a super weird head! This soft shelled turtle figured it was outnumbered and slunk back into the pond. 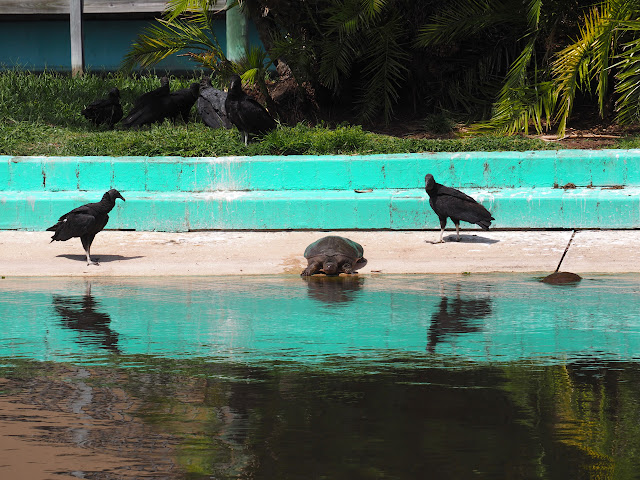 So there are nests, and there are newborn, but the burning question is HOW DO BIRDS MAKE BABIES? Well, now I know, and you will too if you have gotten this far! Firstly, here is the technical explanation. (Click on link!!)

Walking along the boardwalk, I noticed a gorgeous TriColored Heron in a palm, 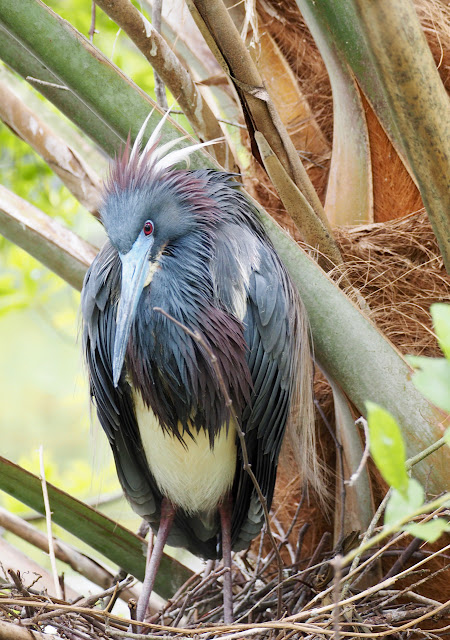 who just kind of hung out while what happened next was happening. Here's an up close look at the feathers... 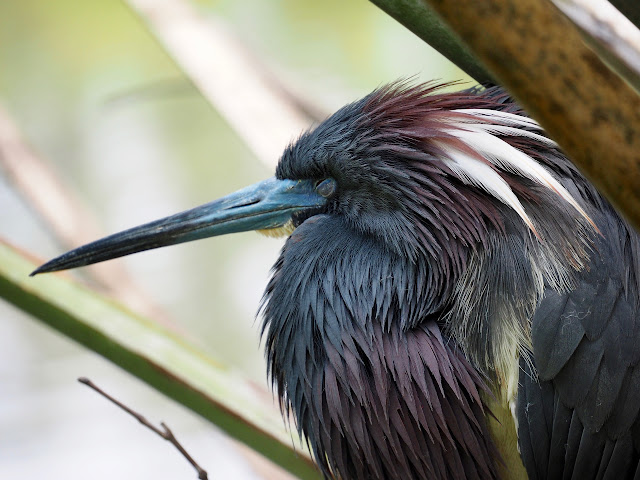 Aren't they something? Anyway, adjacent to the above beautiful bird I saw two other darkly colored birds which I have now learned are called Little Blue Herons. Unlike the big boy herons, they are really blue. I'm thinking this was the "kissing phase." 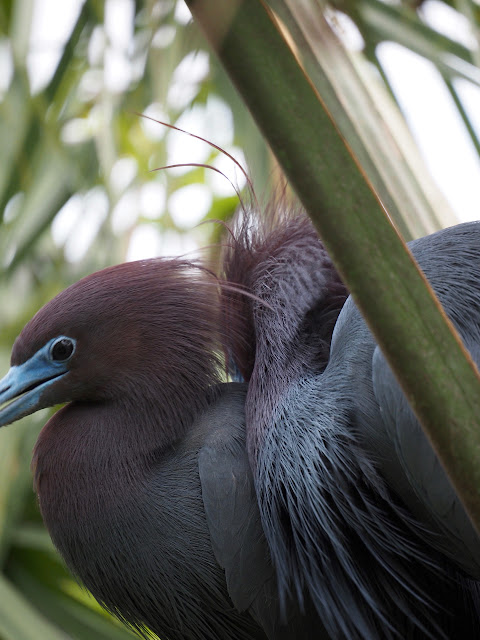 Next up, the mounting... 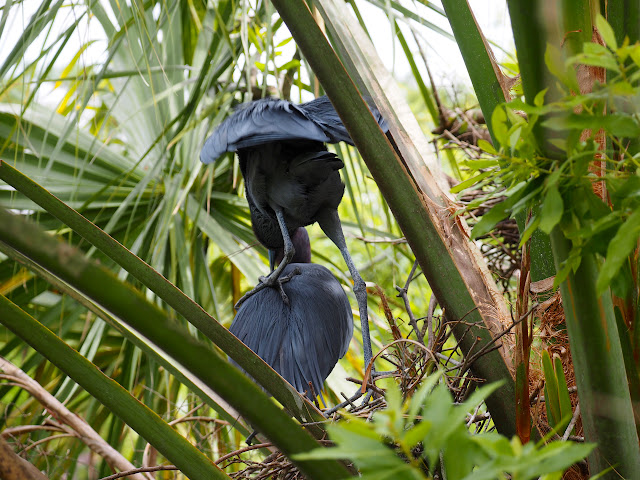 Never have I witnessed anything like this before, and in my clueless state, I hardly knew what was going on. The full mount came next.. 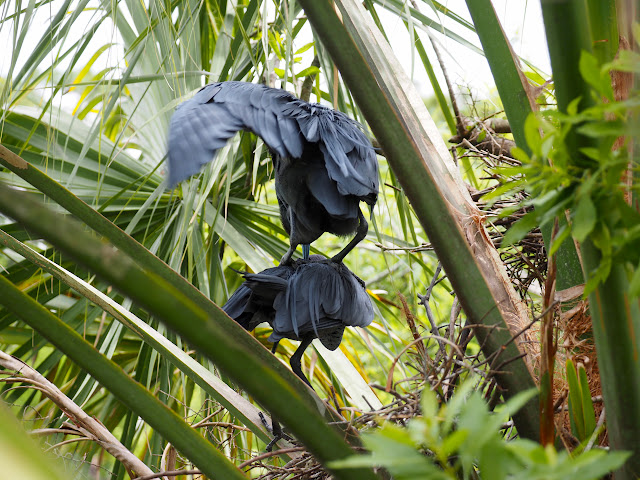 The females must be pretty strong to hold up the male while precariously perched on a palm frond! A flurry of wing flapping going on.... 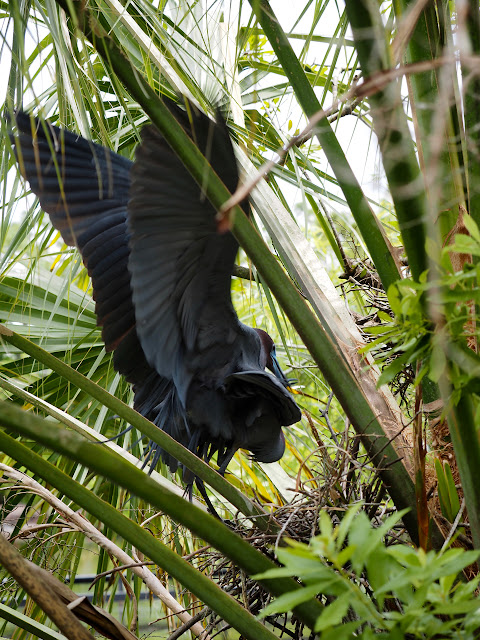 And then it was time to relax... 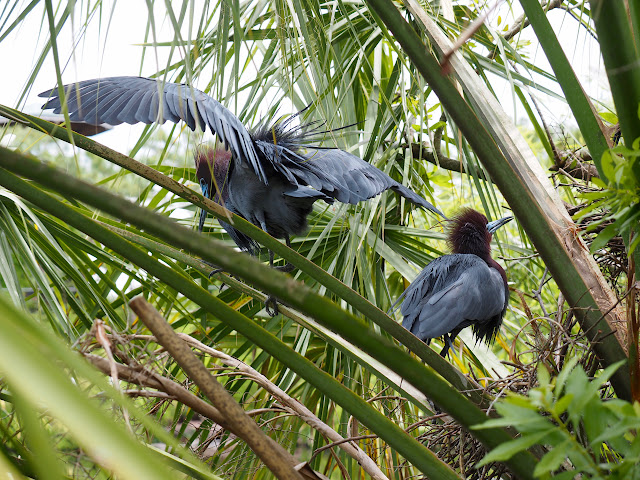 Perhaps you've noticed the nearby nest pictured? According to the handy link, sometimes it does not take so they go at it again. Just saying....

Obviously I could show more, and although I'd love to, I suspect you've had enough of birds. Switching gears, I caught the pesky squirrel gnawing away at our recycling bin, and if that weren't enough for him/her, the garbage can with the green lid is showing signs of becoming squirrel food! 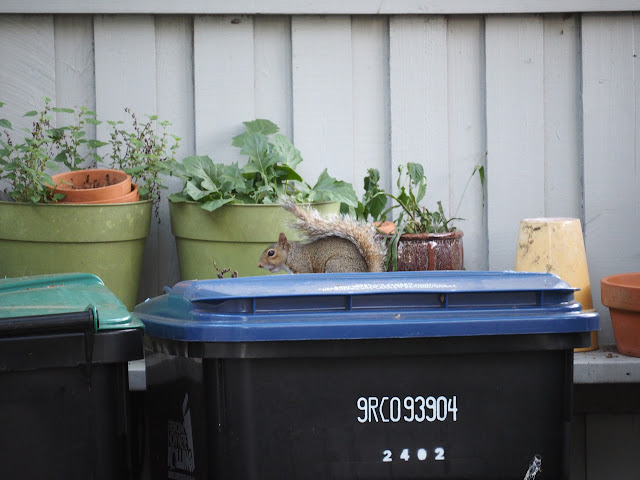 I don't know who was the brilliance behind making the garbage lid green when for YEARS green has been the color of recycling. Duh!

Completely unrelated to bird sex, Barb sent me a text on Saturday morning stating that she sat down to watch her favorite channel on television, HGTV, and what should she see, but her friends, Bruce and Gail saying "wow" multiple times on national television. A screen shot proved it. Speaking of that house, in spite of what Ashlee said on the show, the house remains on the market.

In other news, my hearing is returning!! Woo hoo!!