April 07, 2016
Once I learned the owlets were nearby, once again I have become obsessed with watching them. First, though, I've had to find them, and that has proved very elusive. I did discover that they have pretty much moved back to familiar territory, two yards I know well, belonging to Nell, and Victor. Saturday morning I did see them, however, the light was so dim, my photos were useless.

Folks in the neighborhood know my fascination as well, and people are always talking to me about the owls, and in some cases, texting me when they are visible. My friend Lisa did just that yesterday, and because I was heading out on some errands anyway, I stopped there first. Except it was not one of the owlets that she spotted. While we were chatting, I did see this; my first Monarch of spring. 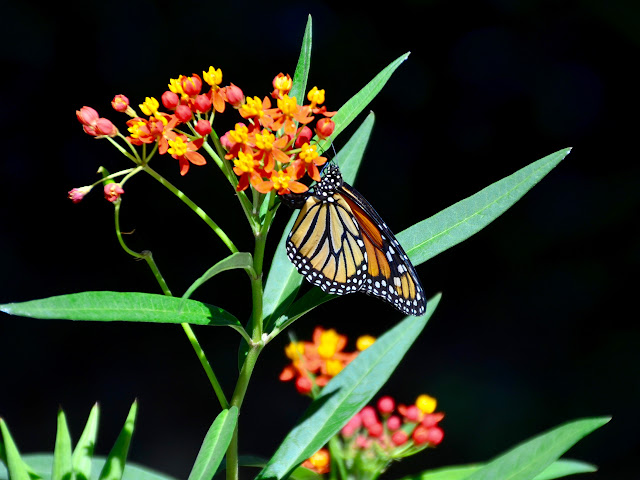 Of course it took me about fifteen shots to get this good one!! Earlier that day, because I could not find the owls, I rode over to check on the eaglet--not a bad problem to have, right? I took this photograph to give you a little perspective on their location. 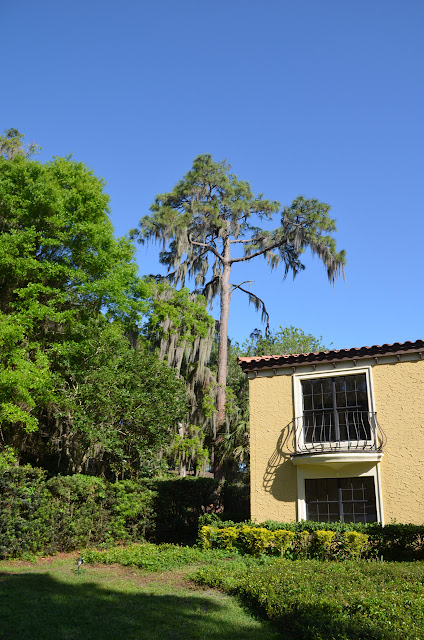 Way the heck up in the fork of that pine tree. At first I did not see the eagle because she/he had moved up a branch, and while looking through my viewfinder, I discovered why...the eaglet is getting big!! 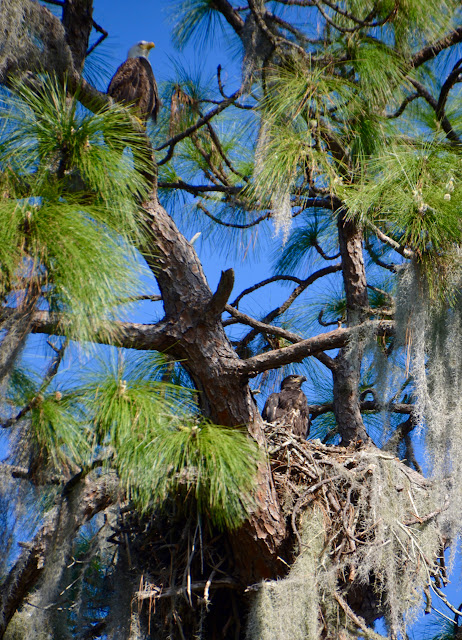 Not nearly as cute as the owl, however, I'm not complaining! I count myself very, very lucky to be able to watch nature in the wild, or as wild as neighborhoods can be. :)

Riding home I spotted some ibis fly up into a mostly bare tree, doing their best to hang on for dear life in the wind. Eventually two of them had had enough, soaring high in our gorgeous blue sky. 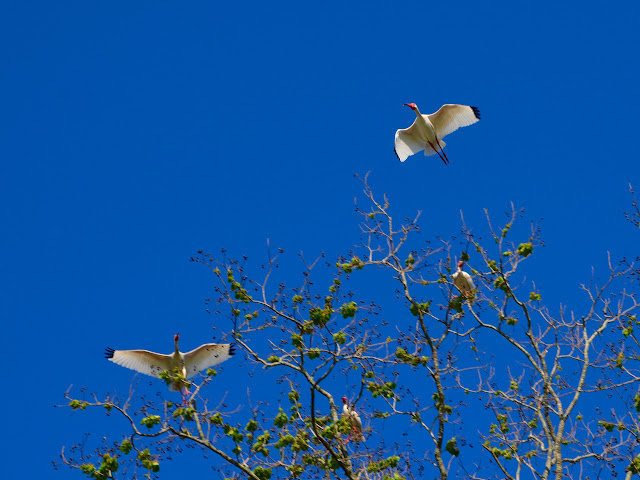 Ibis are definitely unusual looking birds, but they are a delight to watch flying with those black tipped wings.

On another day that the owls evaded my search, I rode by a house on Delaney where a woman lives who is a wizard with orchids. Her husband used to sit outside by the garage with a table full of orchids to sell to customers in the passing cars, however, I've not seen him in quite some time leading me to believe that he may have passed away. I've been to a few orchid gardens, and of course, Tom Ritter's Orchids, formerly our most famous grower in the area, however, I've never seen an orchid quite like this one which proved very difficult to photograph. That said, I thought you might enjoy seeing it, nonetheless. 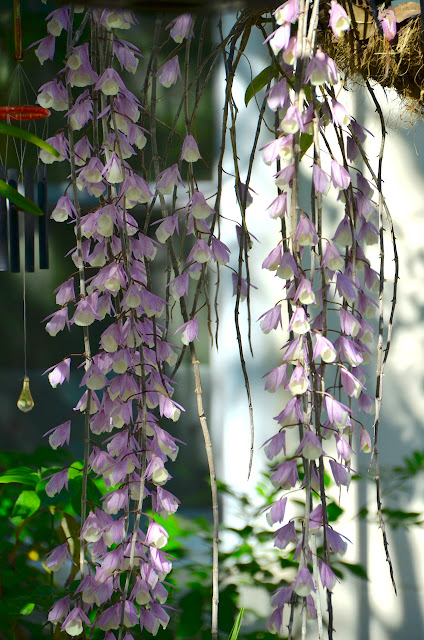 Each pot had multiple strands of these lovely blooms.

The things you see when you get out and about....

Okay, so about my doctor's appointment which ran 2 1/2 hours, btw. Dr. Spector and his entire staff, from the receptionist to the audiologist, were wonderful. The front counter had this super cool art project displayed. 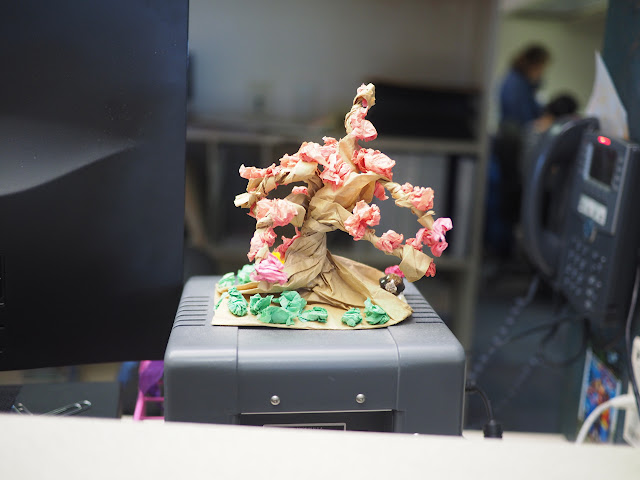 First step was having the built up wax removed from my ears with the right one being the worst! He poked some tool in there, and although it felt funny, it did not hurt. Next, he sprayed my nose with a mixture of Afrin and Lidocaine in preparation for putting a probe up and in there!! While that was doing it's thing, I spent time with the audiologist who performed the hearing test, with results I could have predicted....my left ear is way below my right on the chart. Once the results of that were in, Dr. Spector put the scope into my nose and looked at my ear. What was he looking for, you ask? A mass, which he did not find, thank goodness!! What next? The tincture of time. He quizzed me about how long this had been going on, and I told him it began with the flu in February, and because I am lucky enough to have this blog to remind me, I know it has been nearly two months.  According to him, most of the time the fluid which is muffling sound will dissipate over time; after three months they recommend drainage. Let's hope it does not come to that!! I was more than happy to fill this out with all positives, and coming from a curmudgeon like myself, that is saying a lot! 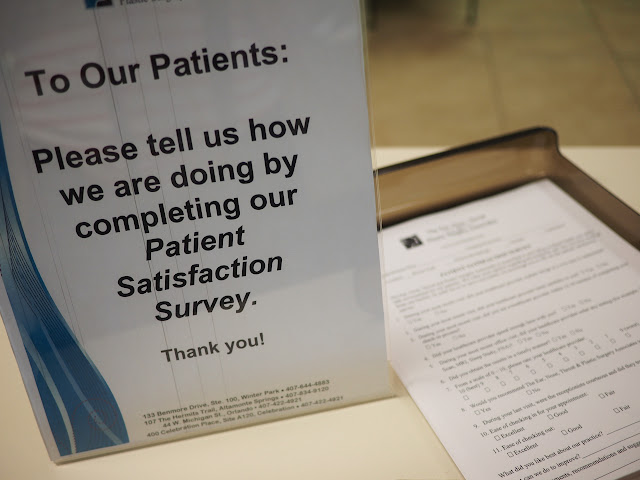 This morning Bruce wanted to be at the job site early, like 6 AM early, so I ended up getting up as well. Still super dark, so I waited for first light, and the rain to stop, before riding over to....you know where. First light was nothing to write home about, HOWEVER, for the first time in days and days, I spotted all four of the owls. Oh my goodness! There were birdbath photos... 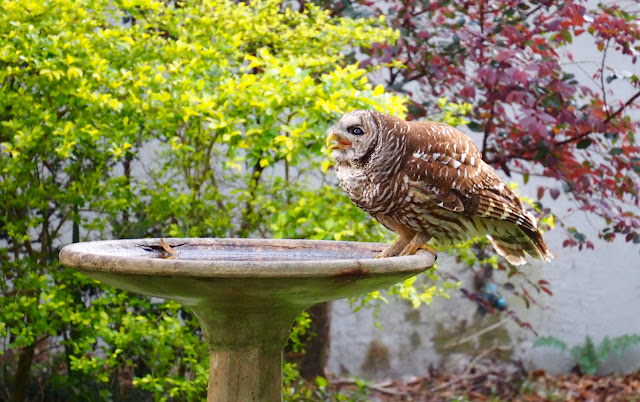 Bird feeding photos as well. Most of them were horrible, due to the low lighting conditions, but this one at least serves the purpose of showing you the way they are fed. In this case, a mouse! I wish one of the parents would come get the two that are in our yard eating beneath my bird feeder! 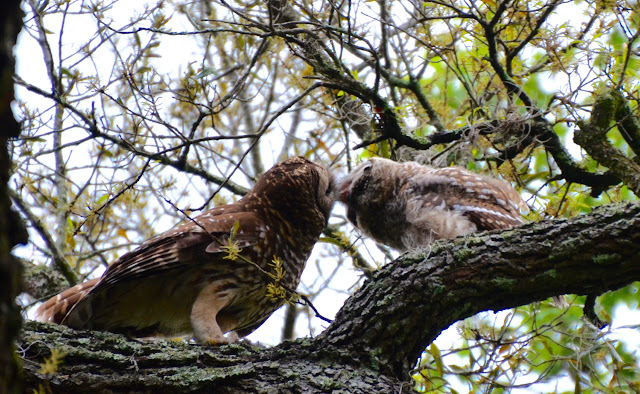 Before the week is out, this tree will undoubtedly be filled with leaves, making them all the harder to find. If you can believe it, and I expect you can, on my way to pick up our taxes (OUCH!), I stopped once again. For those of you unfamiliar, it is only a few streets from my home, so not really out of the way. Anyway, the sun was finally beginning to shine, if only a little. Look who I saw way up there. Do you see how the wind was fluffing up the chest feathers??? So cute! 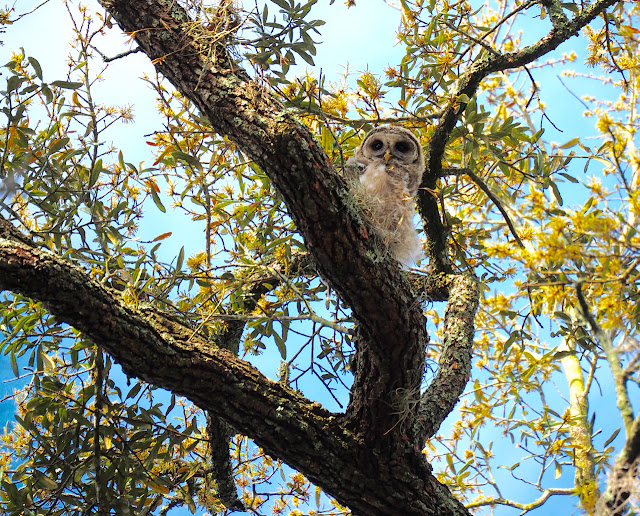 Try as I might, well really when my neck finally gave out from looking, I could not spot owlet #2.

For perspective on their location, they are in the highest branches in the twisted oak trees. 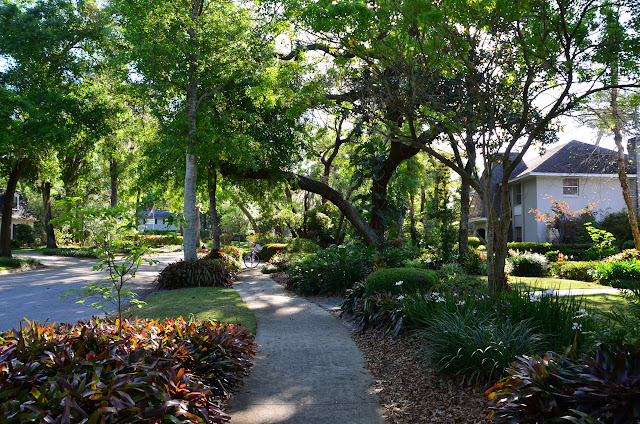 Can you spot my bicycle on the sidewalk? Victor's house is on the right.... now you know.

For nearly a week I've been meaning to include this in a post because I think you will enjoy it. In this blog post from January, I showed a quilt I'd made with a pinwheel block. Recently I came across a you tube video on how to make them, using a far easier method, that worked like a charm. Wondering who is this woman doing the videos? I mentioned her to Matt during our big Facetime chat,  and he said that the name of the company sounded familiar to him. Perhaps he'd read about them, or so he thought. Well, I guess he did....the Missouri Star Quilt Company is all over the news and rightly so (sew), because they have such an inspiring story even if you are not interested in quilting. Here's something about them from NPR explaining how they have revitalized a small, as in 1,800 residents, town. I absolutely love that kind of story!

As I do the story of Jordan Speith, who as I type, holds the first day lead in the Masters. I must go watch, hoping no one will catch up with him!!