August 14, 2016
On my way to take Graham to the airport, while driving on Judge Road, I noticed some yellow in a field adjacent to Palm Gardens. Well you can bet your sweet dollar that on the return journey home, I just had to check it out. Goodness gracious, two large patches of growing sunflowers!! A gentleman was watering giving me permission to traipse around. Explaining that the season was nearly over, he told me they grow them to sell to florists. There was a serious bee feast going on here: 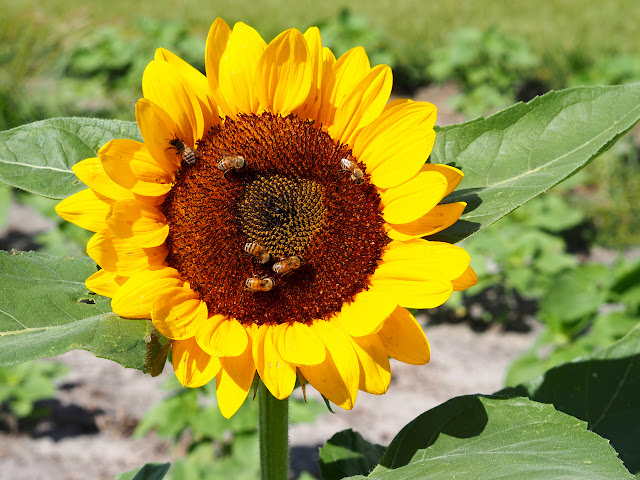 Speaking of feasts, how about the Olympics?? For a sports fan such as myself it is a variable two week feast of amazing events and athletes. Did you hear the story of the Fiji rugby team? Incredible. If a story such as theirs does not bring a tear to your eye, I'm afraid your heart is way too cynical. Michael Phelps!! Katie Ledeky!!! Trampoline!! Handball!! Archery!! Women's soccer! :(

It has been more than fantastic, and for three nights I had someone besides Bruce, to share in that joy. Turns out Graham, the IT guy here from Vancouver booked an airbnb in a part of town that was not ideal. Arriving on Sunday evening, the first Uber driver said, "man, this is a bad part of town." Monday, same thing. Tuesday the same. Bruce dropped him off after their shared meal and repeated what Graham had already learned from the Uber drivers. He offered our guest room. He declined. For a few hours anyway. He arrived via Uber about 9:30 Tuesday night, staying until Friday late morning. Well he was at work with Bruce, but every night, following dinner out, we cheered on the Americans and the Canadians. Wednesday night, Linda and Colin joined us for dinner at Santiago Bodega. 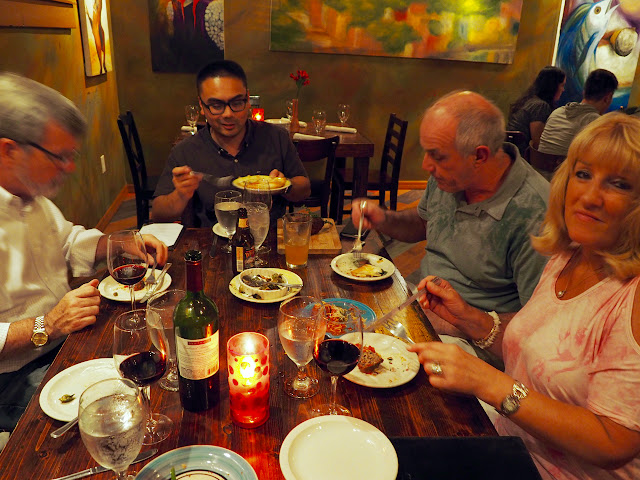 Colin is Bruce's lifesaver, or in baseball terms, his closer. Thank God for Colin is what we have to say around these parts.

On our way there we stopped by Pulse for Graham to take photographs. 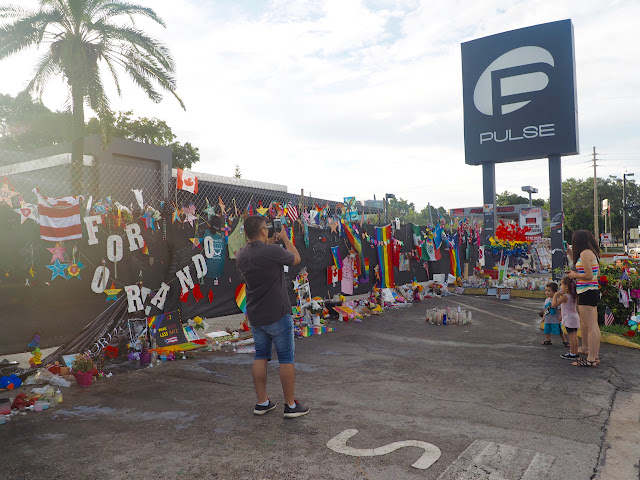 Not a day goes by that our newspaper does not have some story related to the shooting. For instance, today it is about a policeman, one of a small crew, that removed the bodies, leaving him with a case of PTSD. Very, very sad. Then too, I saw Nancy Pelosi visited the other day. People keep coming, leaving all manner of things. 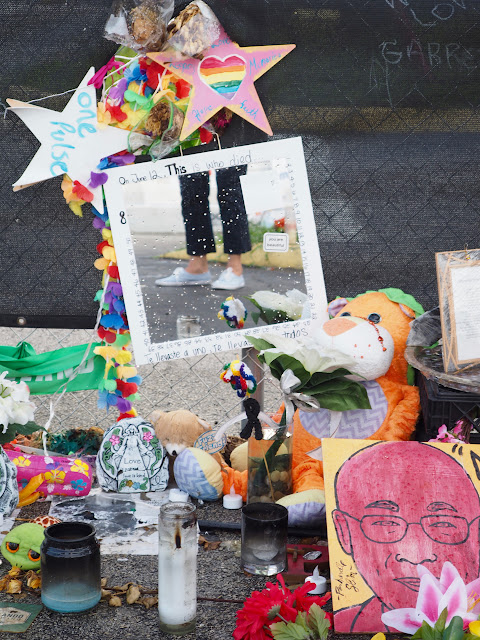 It is hard to believe it has been two months already!

During the day I've been watching the Olympics while doing something I've not done for quite some time. I found the box of embroidery floss I'd been saving for years and years, and tied the quilt. 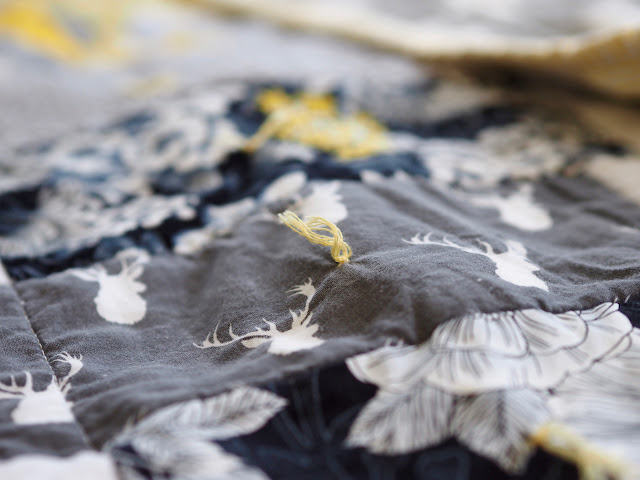 I should have left longer tails, however, not having done it for years, I'd forgotten that part. I did quilt it, but not heavily. Here's the back: 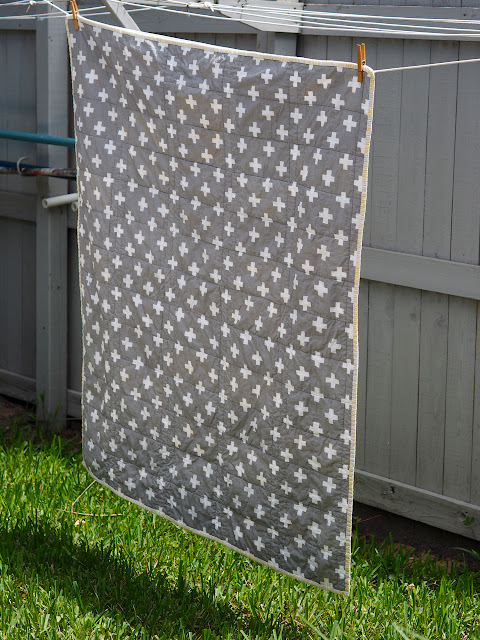 Before Graham left, I asked him to sit for a photo and unlike some folks, he was only too happy. He's had a lot of fun playing with these colored wooden balls Matt gave his Dad for Christmas, so he wanted to include them in the photo. 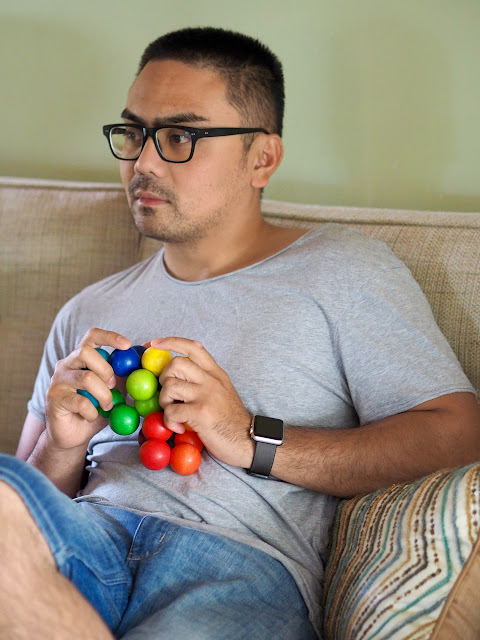 We had some good discussions during his visit, including one about vacations. He said, as a son of Filipino immigrants, he was always taught that "work was a vacation from poverty."  That's really quite a saying, isn't it? Bruce and I are all over it. It was nice having a 29 year old in the house. Waking up very cheerful every morning he would say to Bruce, "are you ready to go kick some ass?" He was. :)

It never hurts to put a dragonfly on the blog... 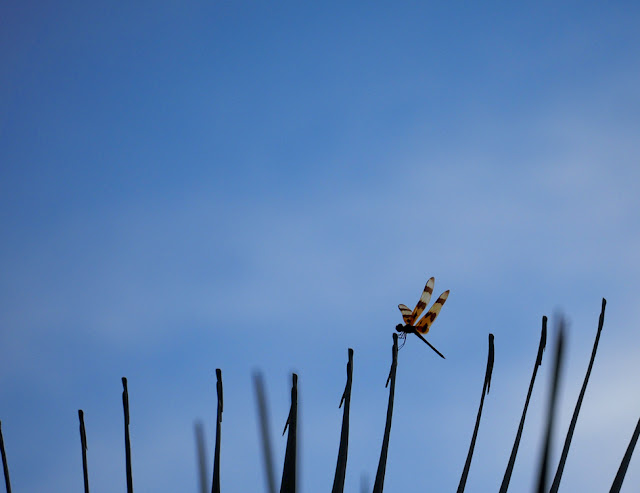 This morning, taking out the recycling, I watched a hawk fly into one of the 100 feet pine trees in our side yard. 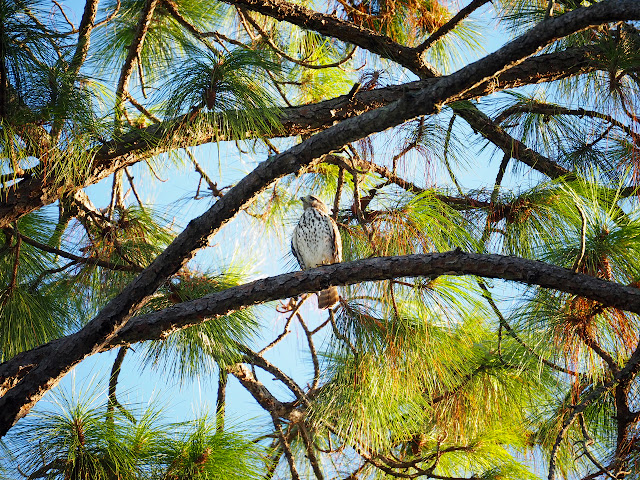 I'm working on another quilt for someone (!), and it has not gone well so far. I'm struggling with the color choices and design. As such,  I told Brucer I was going for a bike ride to clear my head and see if I could puzzle it out.  Well, how about this for a surprise? 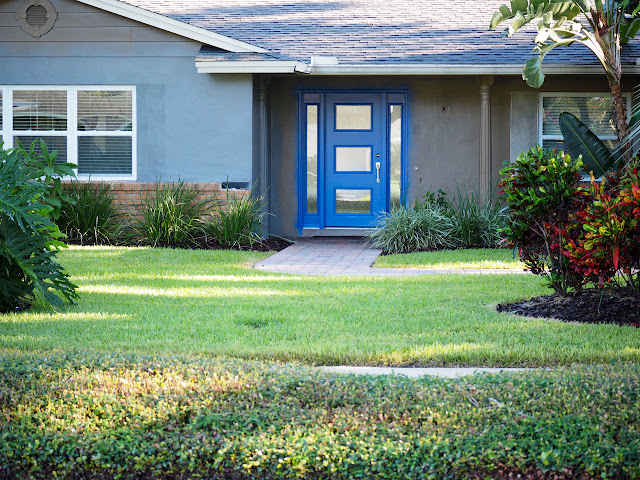 This house, my friends, is on the other end of Appleton!! One of the prettiest and most expensive houses in our neighborhood, previously the house was painted milk chocolate with an orange door. Now this! They say imitation is the sincerest form of flattery don't they?

Not only did I see a house in the process of being painted just like ours, I came across a garage sale with fabric, one of which will add much to my new project! 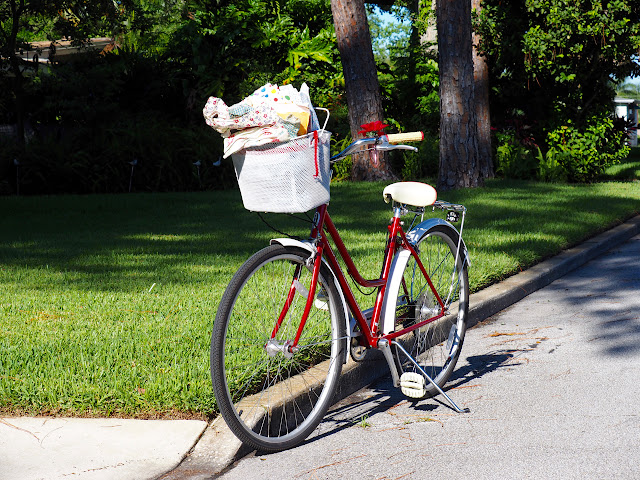 Carrying a little money purse in my basket, for just this sort of thing, with little being the operative word here. Checking my purse, I told the woman all I had was $6, which was entirely true btw, she said fine, and off I went with a front heavy bicycle. Oh the surprises I find when I venture out. My big estate sale fabric haul,  from about two years ago, has nearly been used up, with two of the remaining pieces in the car just now. A woman I've met at church is seriously into retro fabrics, buying them on eBay and the like. Dated 1969, one of the pieces is the brightest pink you can imagine, with equally bright colored flowers in a pop art style, that was even a little too much for me, however, she is lots younger, so I'll look forward to see what she makes with it. That is one of the awesome things about sewing, making things with fabric that are all your own.

Talk about flying in the wild blue yonder... 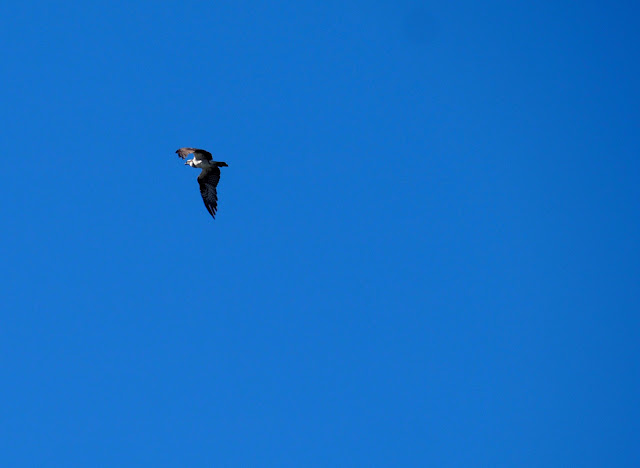 Taking a break from my laughable attempt to imitate Katie Ledecky in our backyard pool, I watched a pair of Ospreys flying in circles until such time as one of them flew straight down into the lake at the end of our street. There were no flips involved, unlike the Olympic divers!

Ready for a new day,