August 03, 2016
As far as I can recall, I used to be a somewhat competent multitasker, however, those days are far behind me. More recently, I need to seriously concentrate on what I am doing, which as you well know is sewing! I can vaguely remember having all the kids around playing and talking, while I was at the sewing machine listening to the Magic games on the radio. I used to love those days so much.

Nowadays, most of my days are spent in silence, well if you don't count the running commentary that plays in my head!! While I don't much like having my picture taken, (I'd much rather be behind the camera), I asked B to take a photograph of me, standing beside the orange wall adjacent to Hawkers, because I wanted to show a dress I made last week. I'm not fishing for compliments, instead I wanted to share what I think is a funny little story. 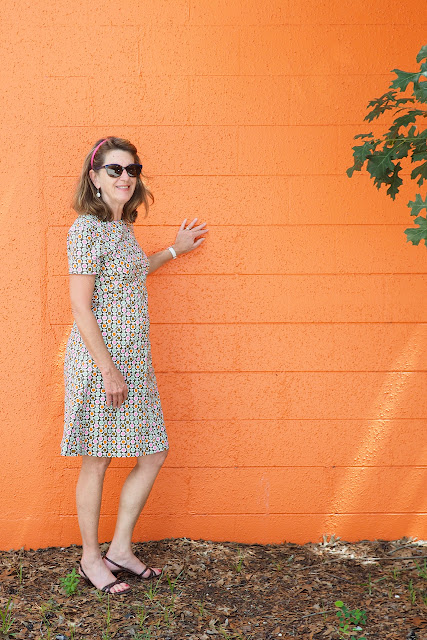 I can't tell you the number of sleeveless dresses I have but I probably could tell you how many short sleeved dresses I own --only a few. And why is that, you ask? Well, there are not many to be found in the marketplace, that's one reason. Another is that most of the patterns are sleeveless because sleeves can be hard to put in. I've written about that before. One of those times, Nancy contacted me to remind me of a sleeve setting technique I'd taught her years ago. It goes without saying that I'd forgotten said method! Anyway, instead of the double row of basting stitches recommended on the pattern instructions, and all over the internet I might add, you pull out a long piece of thread, enough to cover the entire cap of the sleeve, then sew a wide zig zag stitch over top of the thread. Next, you pull the long thread just a bit and voila...you have pulled in the extra fullness to make the sleeve fit! When she reminded me how to do it, I tried it out on this dress, and it worked like magic! Thank God for younger sisters!

On the way home from church, as we were driving down North Ferncreek, a scene caught my eye and I asked B to turn around. As has been repeatedly documented on this blog, there is a lot of tearing down going on in Orlando for both commercial, and residential properties. 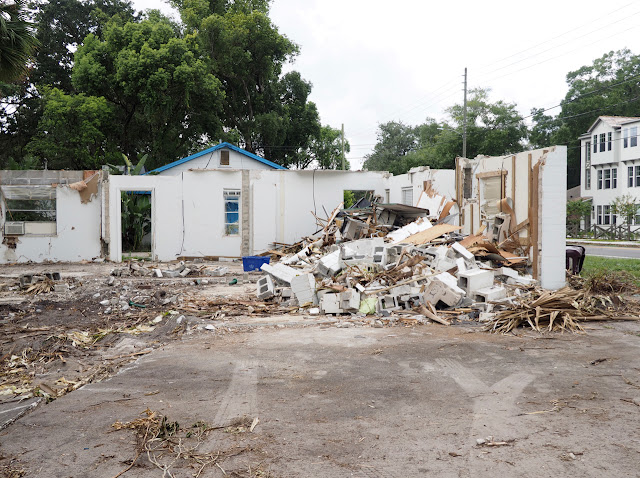 I've no doubt this corner building is being torn down to make way for new townhouses as pictured across the street. There was just something about the remaining blinds hanging in the window that seemed poignant to me. 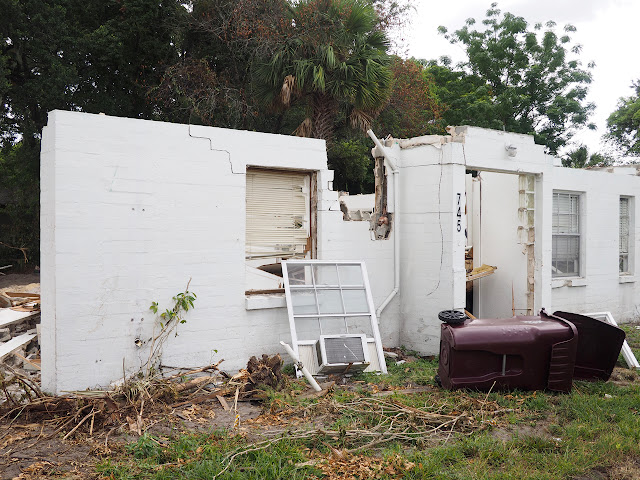 So, I have not entirely shut down my photographer brain, but almost! Actually I had some good news this week from SunDance. Apparently, World Market will be carrying one of my images soon! Plus, they have been invited back to Hobby Lobby, so maybe something good will develop from that. Since the original HL order, most months I receive royalties from them reordering prints. That's a good sign, right?

What I am to make of these statistics? So weird! 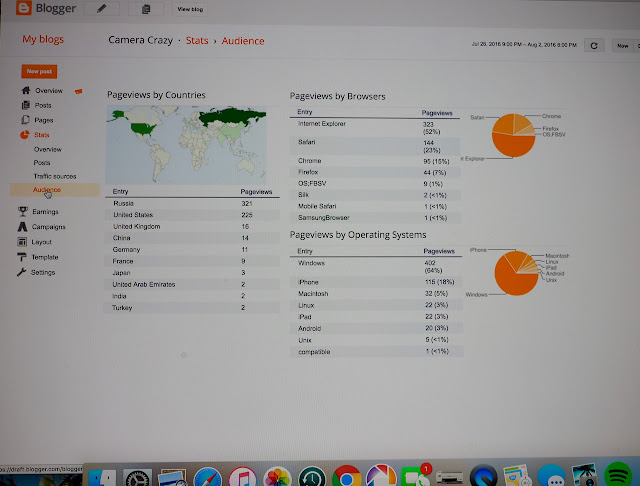 Before I inundate you with photos of the new quilt I'm working on, I wanted to share a few updates. Remember the heron nest we followed in the spring? It's gone now. We knew it was coming because the tree was dead as could be, it is no more. Another blog update, that I only realized myself this past weekend, is that when I paid Mary and Sam for the dresser, I used a little hidden cash stash from my wallet. At the time I could not remember how that stash happened to be. Well, now I know!! My piggy bank money. How fun is that? If you missed that post, here it is.

Another funny thing,well I thought is was funny, is that a friend and I were talking about the city calendar contest during which time she said, "this month's photo is so boring." Ha ha! It was mine! Speaking of that photo, while I was picking up some shirts from the dry cleaners, there it was to greet me. You would have thought I was a celebrity the way the woman at the counter reacted when I told her it was one of mine. :) She did say how customers are always asking where they can get one... 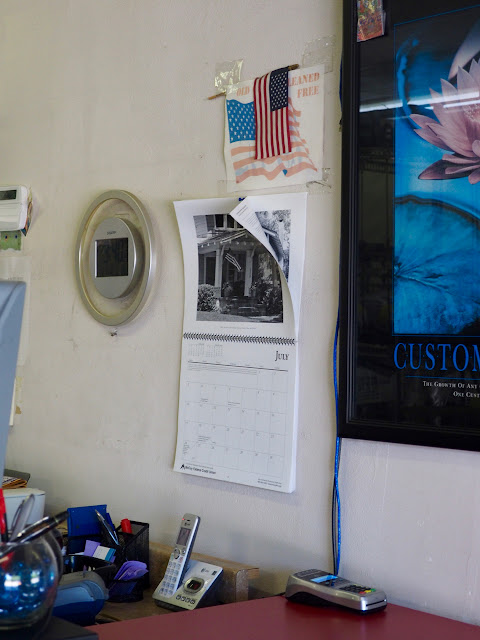 The big mural Andrew Spear was working on at the restaurant is complete; I know Earls paid a pretty penny for it. Driving down Mills Avenue, one can see his work for free. 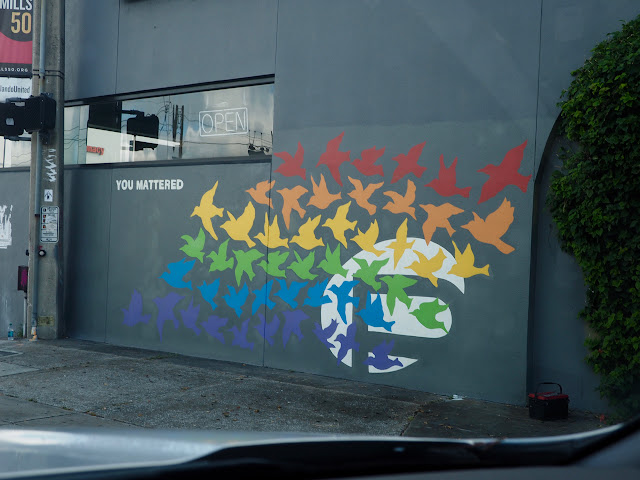 Well, then, let's talk about a new quilt, shall we?

For at least twenty years B has had a blanket in his car that I gave him one Christmas. As you can imagine, the blanket has seen better days. No, it is really not that worn, but boy, is it ugly! He still loves it, but in an effort to convince him to part with it, I thought I'd make a new quilt to replace it. Rummaging through, what I'm going forward calling, my "fabric pantry", I pulled a bunch of warm colors that I hoped would go well together. 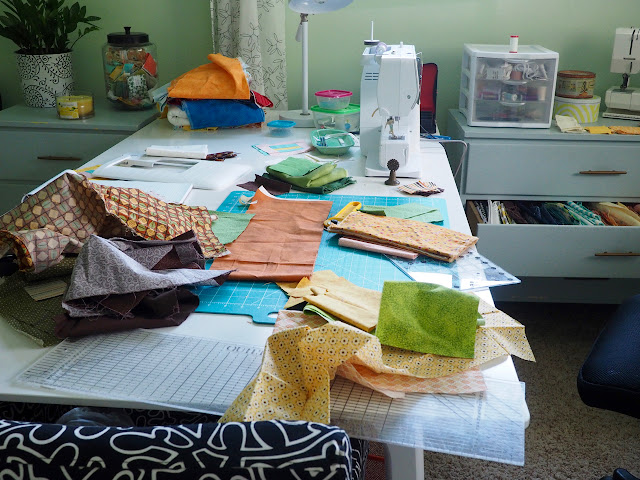 Not all warm, because then it would be boring, but mostly so. Puzzling how to use them, I came across a pattern online that seemed masculine to me. They used various shades of gray, but I thought I could come up with something using what I had. Figuring out the measurements, (!!) I made a few blocks  to see what I thought, then laid them on some other fabric from the pantry to see about using it for sashing. 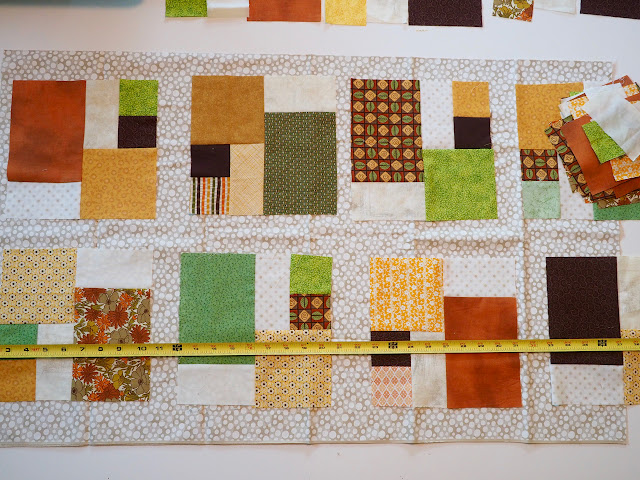 So far, so good. Thrilled at how well it went together, I decided to hand baste the front, batting, and backing because I wanted to try a quilting pattern that would make removing pins as I went, a pain in the you know what. Bruce's Mom left me both her own,  and her Mother's sewing supplies, and I have many such folders of needles. Isn't it a delight? 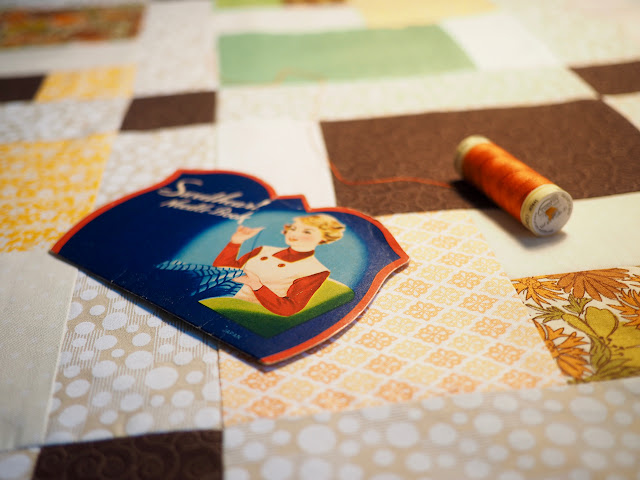 Ladies and gentleman....I am in love! First I tried it out on a sample... 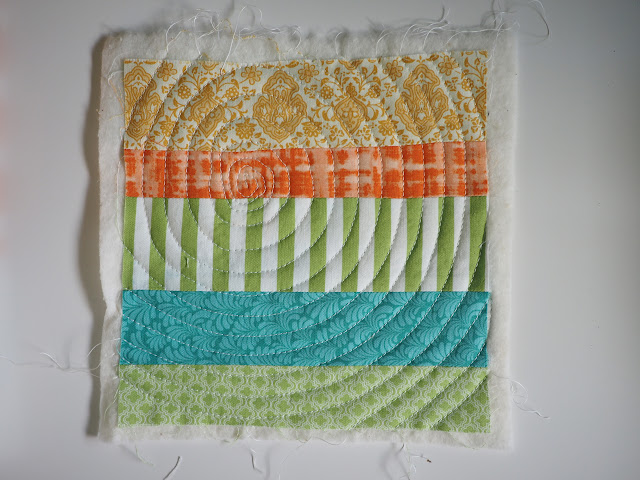 and later in the day I got to it on the real thing! 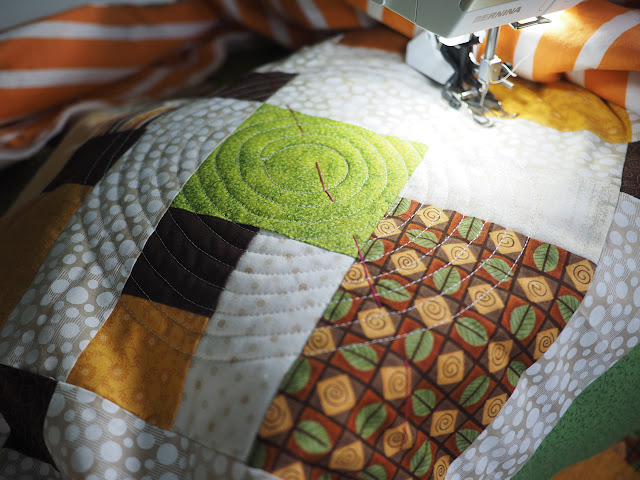 The purple threads across the middle are my basting threads which will remove very easily when I'm done, and friends, I'm almost there after only about three hours of sewing! 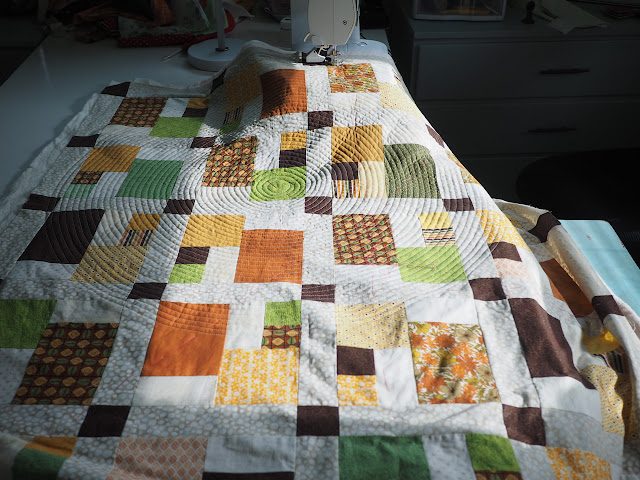 Of course the quilt is not so big, so how I would manage on anything larger remains to be seen, but from the moment I saw another quilt done this way, I wanted to try it, and now I have. One reason it goes fast is because there is no stopping once you get going. Happy days are here!

Poor Bruce working so hard on the job site, and now at home. Monday night, around dinner time, both of us were thinking we were hotter than normal. Turns out the ac shut down of it's own accord. B took some things apart, 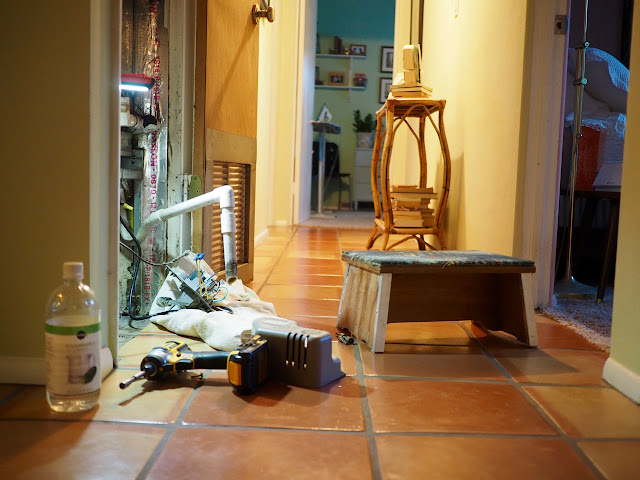 flushed the line with white vinegar, and finally it came back on. Yikes! This afternoon the pros are coming to give it a thorough check up!

Finally, a major discovery here! Use car window washing fluid, dilute with water a bit, and your windows and mirrors will once again sparkle! I learned this the hard way; trust me on this.

Silence is golden these days,