In Search of the Perfect Rain Boots

November 27, 2017
While staying warm in Vancouver is important, staying dry is the priority! After last Sunday's foot drenching in my leather boots, I knew rain boots had to be purchased ASAP. As such, I may have been influenced by the mass of fallen Japanese Maple leaves I saw on my walk to Nordstrom, 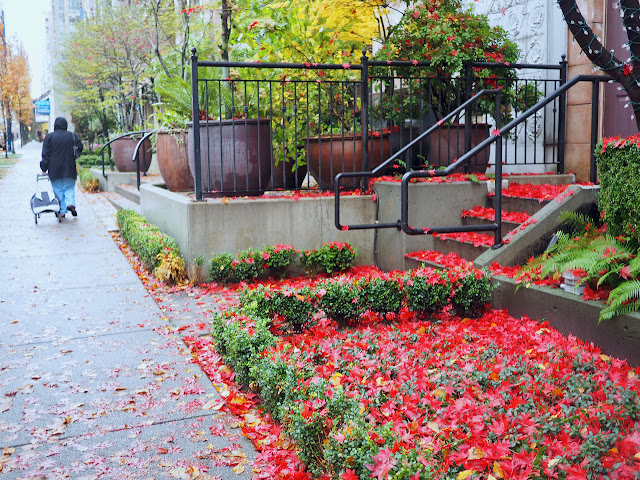 because I purchased a pair of UGG rain boots in that very same color. And they were very cute, albeit wildly shiny and bright. Along the way I also saw this bird hopping along on the sidewalk, one I'd never seen before, however, after identifying it from a website, it is a wonder that it was a mystery to me. According to this article, the European Starling is America's most hated bird! Do I feel like a dummy? Nope, I'm cool with being in the dark. 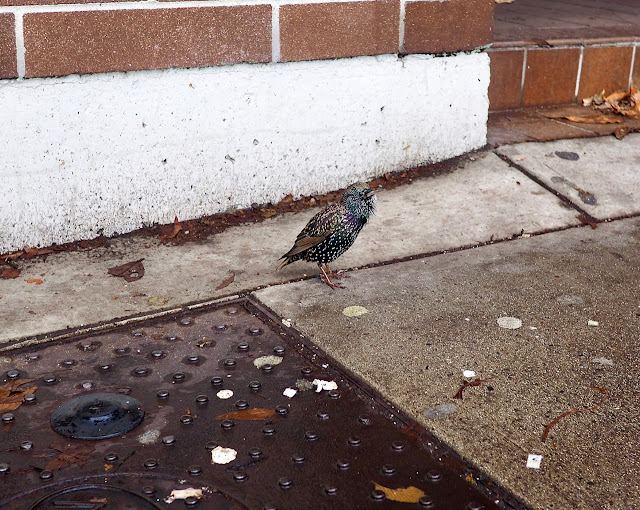 Rainy and windy, oh my. While looking through my photo library for a calendar I am making, I realized that the beautiful leaves have been around now since the middle of September, however, and I've said this before, it seems as if the days are numbered until all of the trees are bare. For a short while one day last week, we did have some lovely sunshine, making these yellow leaves on our street all the more vibrant. 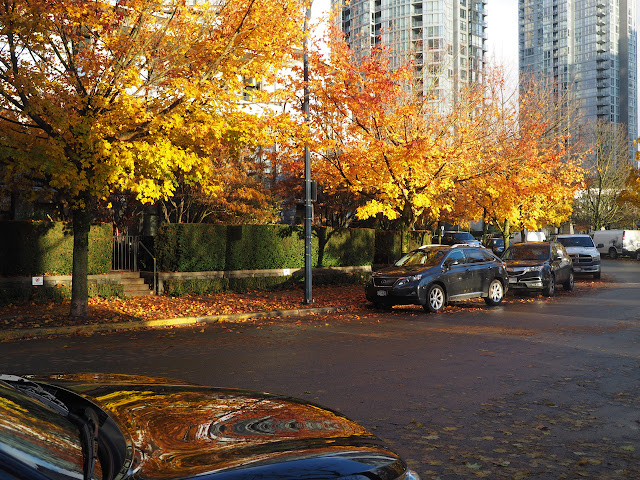 The street cleaner came too, however, no one is responsible for the sidewalk below, which is covered with wet, flattened leaves. Leaves stuck in the fence too! 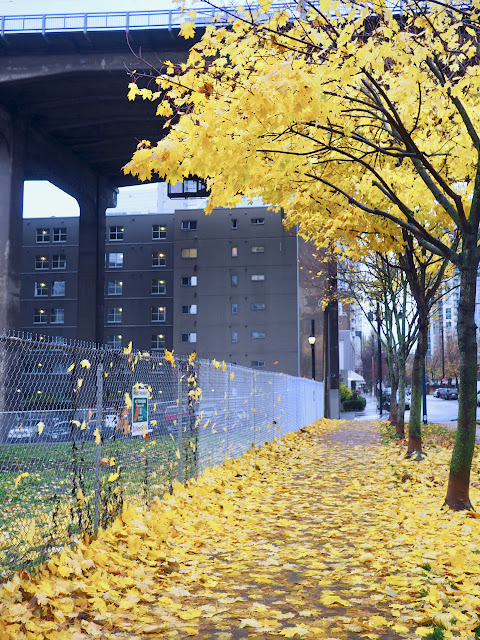 I took the above photo one day last week; after a stormy Sunday morning yesterday, the trees are pretty much empty now.

On a walk to DressSew to buy felt for ornaments, I saw a woman wearing a coat that my quilting friends can very much appreciate. 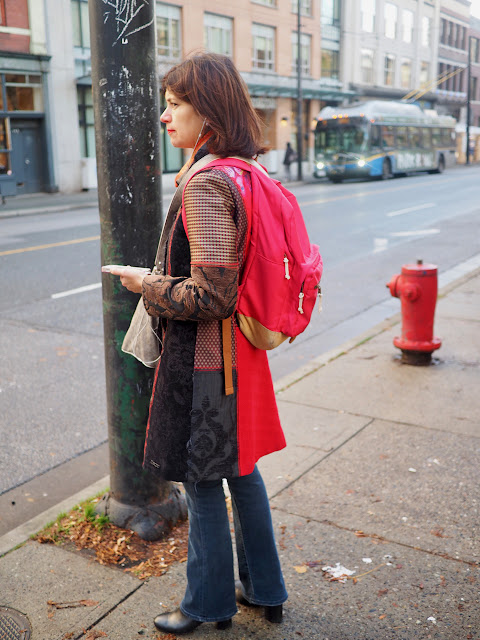 Not only did it rain all day Wednesday, but Mr. Peck was stuck in Seattle, unable to join in a little dinner gathering at Chambar. The truth is, I was to be a guest amongst his workmates, however, they insisted I attend whether he was there or not. So, I put on my bright and shiny, new, red rain boots, staying dry during the mile plus walk under an umbrella. We had a lovely meal and because it was still raining with puddles aplenty, I was thrilled to have dry feet when I returned to the condo. After taking Baxie down, I began preparing for bed. Well, not so fast there Gail. FOR TWENTY MINUTES I STRUGGLED TO PULL THOSE BOOTS OFF, going so far as to knock on my neighbor's door, hoping she could yank them off. Not wanting to bang on her door, I knocked several times with no response. Back to sitting at the end of the bed, yanking and pulling until eventually one came off, followed about five minutes later by the other. For a few minutes I wondered if I were going to have to sleep with them on! Oy vey!! This will never do.

But it was Thanksgiving the next day, so no boot searching for this gal. Although it was an ordinary day here, I knew Bruce was hankering for a traditional dinner so, putting my thinking cap on, I decided to go to Granville Public Market to a poultry vendor there. Holy Cow! Just when I thought I couldn't be any more surprised by pricing here, I eventually gave in, buying the turkey thighs for $15.00. Had we been interested in a breast it would have been $36! So, I had the turkey, but what Bruce really loves, as do a few of our sons, is the sausage dressing I generally make for our Thanksgiving crowd. Sausage vendor next, where I was stymied by the myriad array of sausages. Fortunately they had this handy sign to guide me. 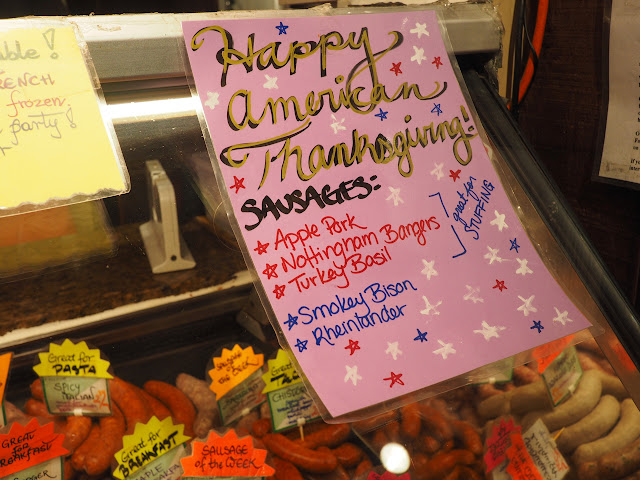 Now I needed some day old bread, finally finding a bakery stall that would agree to sell some. Local apples, and I was pretty much set for an afternoon of cooking. 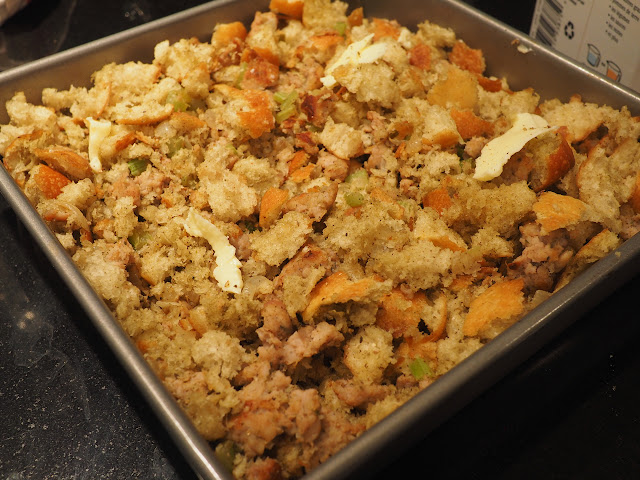 One thing about living here is I'm learning some things I both like, and dislike, in home decor. A black countertop may look chic,  but boy does it show every crumb. I'll spare you the messy photo of the before, instead showing off the results of my apple pie making. Could have used more apples, but the crust was tremendous. It will gross some readers out, but I'm in love with using lard for a pie crust because it not only rolls out like a dream, but it is so very flaky as well. Bruce was never a big crust guy, but just yesterday, as he was finishing his last piece, he insisted I find a source for lard when we return to Orlando. The non perfectionist in me was fine with an off center decoration. :) 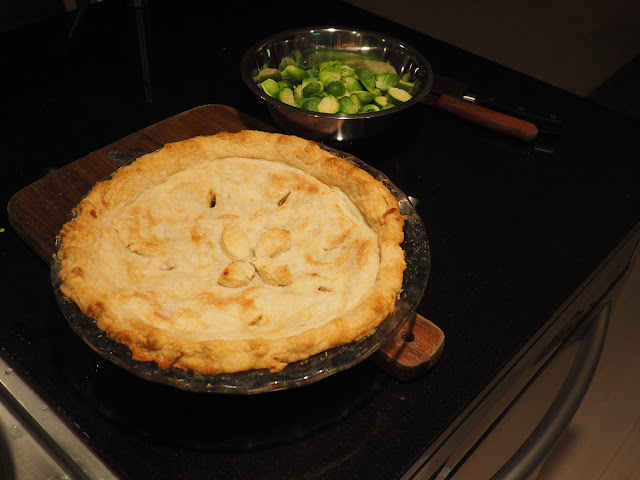 Although everything was tasty enough, it was not the same without our family. Not by a long shot!

I can't remember the last time I braved the stores on Black Friday, but those boots just had to go back. And yes, they do have Black Friday here, apparently a new phenom since the great recession when the American retailers began doing it, and the Canadian chains followed suit. Nordstrom was looking lovely and packed! 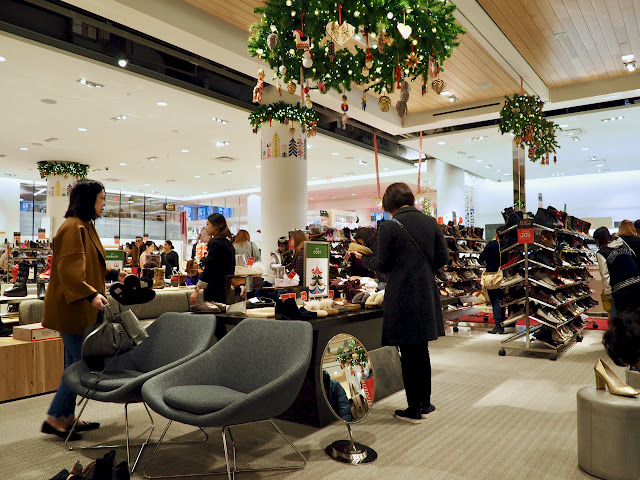 While buying the red boots, I noticed another woman's purchase.....three pairs of Jimmy Choo's, and one pair of Prada. That salesperson went home happy! I chose a different pair, lower and with elastic on the sides that I could grip to pull them on and off. This time I left them in the box until I'd had a chance to get Bruce's opinion on the look of them.

Friday night was a date night for us, and even though he was not super enthusiastic, we walked to the Vancouver Christmas market at Canada Place. Rainy, of course. Before he got home though, I walked down to Sunset Beach to see what was happening across the water at Vanier Park. Why was I not surprised to learn that the lights I'd seen from the balcony were a film shoot? 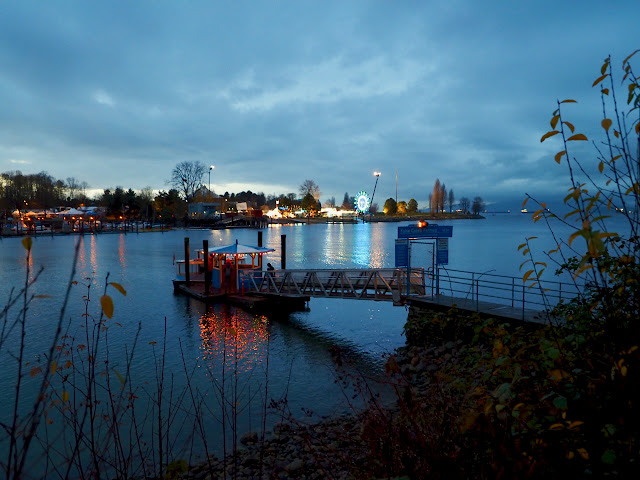 Doing a little sleuthing on the web, it seems as if it has something to do with a new version of Freaky Friday. You see what I mean with all of the cloud cover? I took these photos around 4:30 in the afternoon. Or, make that night at this time of the year! 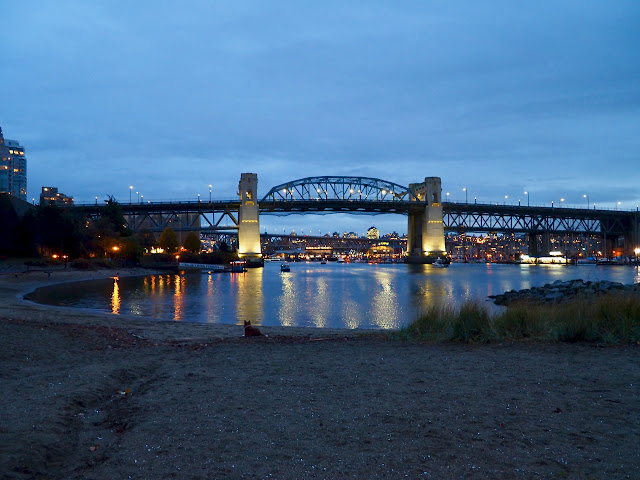 Rarely have I seen Granville Street lit up and it looks mighty good at night doesn't it? 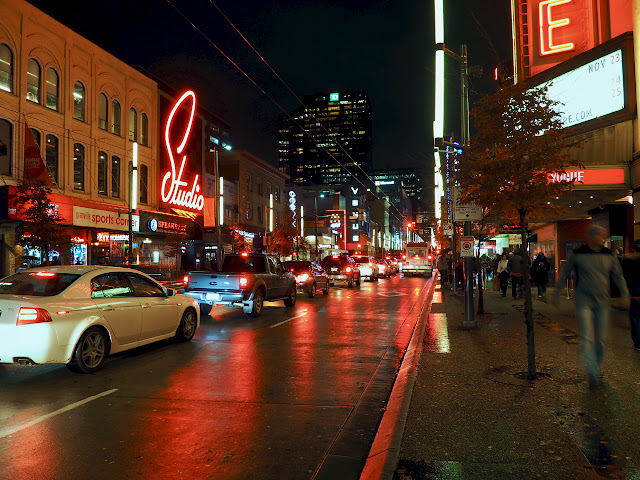 I'd seen this cool ball during the day and was anxious to see it at night. Winter picture of me taken by her loving husband. 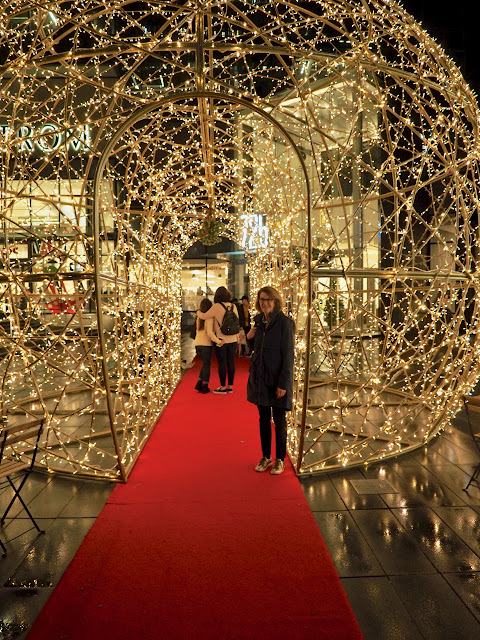 I, for one, was thrilled to see all of the lights and Christmas decorations at night! 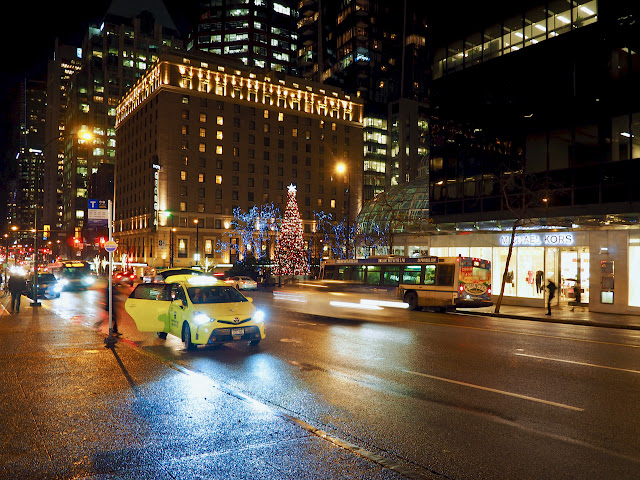 The Vancouver Christmas Market exceeded our expectations by a long shot. The tickets we purchased are good for the next month, so I see a return in our near future. Something for everyone who loves Christmas that is for sure. This entertainment booth looks like it will be cute in the daytime as well. 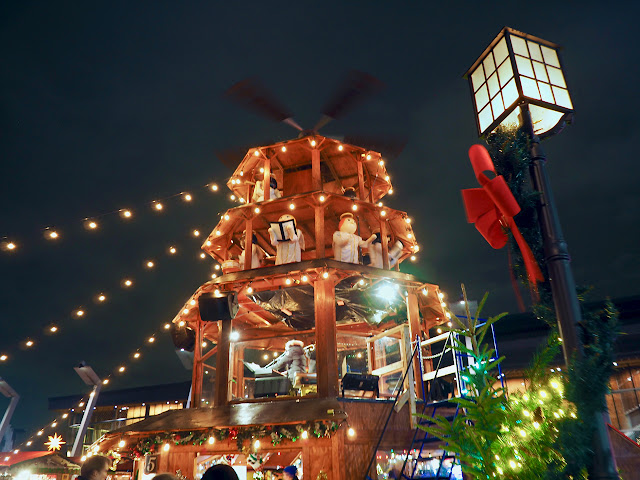 One of the main things I'd been wanting to see lit up was the hospital we walk by on our way to church. Apparently this display is done by 100 volunteers and the goal is to raise money for the hospital. From what I've read, it has been very successful over the years. 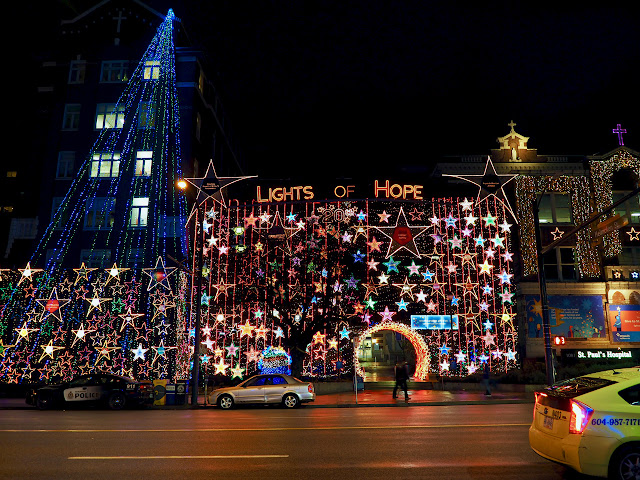 Lo and behold, a rainbow appeared on Saturday morning! 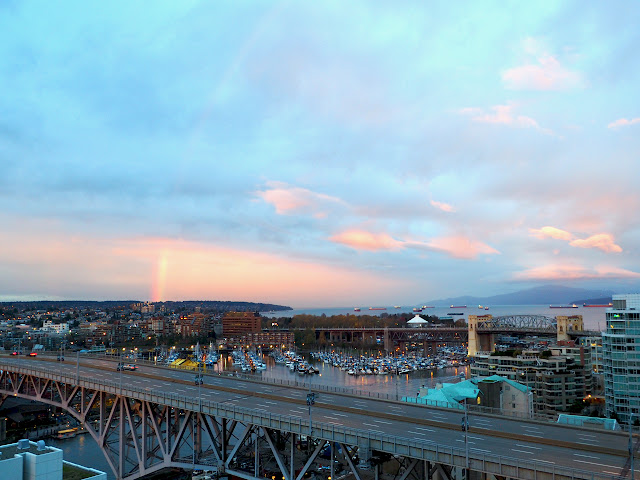 The blue sky did not last for long, but you can bet I enjoyed it while it did. Seeing the color in the sky, I just knew something would go well on Saturday, and my optimism was realized....FSU won their football game and that is saying a lot this year. Always a great day when they beat the Florida Gators!!

More to the rain boot story in my next post, however, I think the third time is the charm.