A Series of Unfortunate Events

February 08, 2018
It had been my intention to next write about how fortunate I was to have woken up around 4AM,  in time to watch the Blue moon/lunar eclipse/ blood moon last week. My photographs were dismal, this one the best of the bunch, 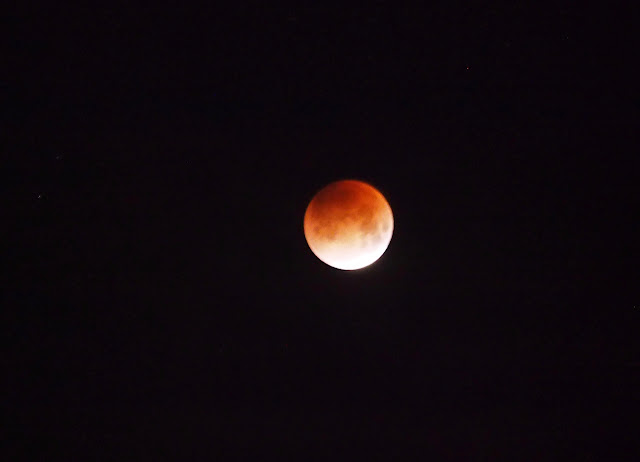 just don't look too closely! More to that story, however, events have since transpired that have, one, kept me from blogging, and two, been pretty dismal in and of themselves.

As you all know by now, Bruce has been remodeling an Earls in Bellevue, a city that is part of the Seattle metro area.  Because free time is my middle name, we decided it would be good if I rode down there with him, spend one night during which he would finish up an important component, and we would return on Friday afternoon. So, like maybe a 24 hour trip. He went to the office in the morning, picking me up just after lunchtime to drive the 150 miles South.  As you near the border there are handy signs that tell you what sort of wait there is at the two border crossings that are very close to one another. You won't be surprised to learn that it was wet and gloomy. 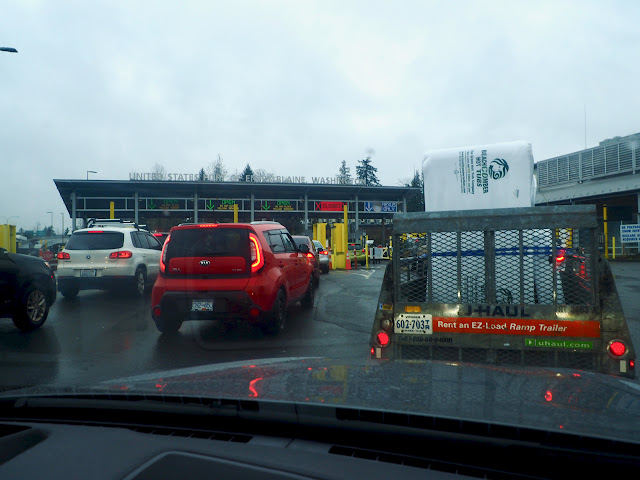 The Blaine, WA crossing is much smaller than the Peace Arch crossing and generally not nearly as busy so it is the one he chose. Part of the drive is flat, and part of it is through some mountain passes, which on this day were filled with clouds or fog, I've not been able to understand the difference. 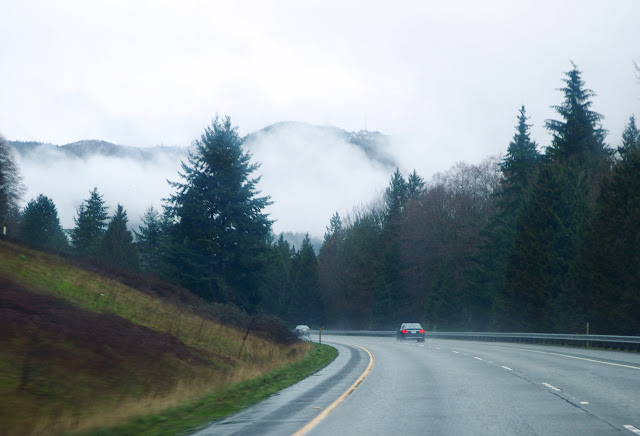 Because it was still early afternoon, the traffic was not terrible, however, the weather was, with constant rain the whole way. It is enough to rattle anyone's nerves and I was glad I was there to keep Bruce company. 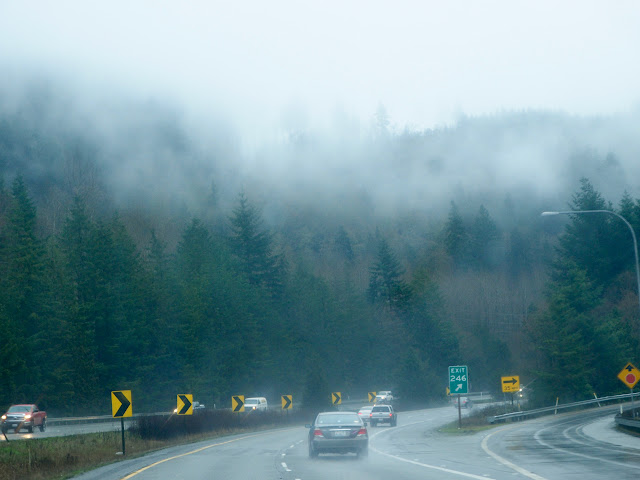 Eventually we arrived at the Hampton Inn and Bruce took me to see the restaurant. The furniture is all new, made by Giovanni. 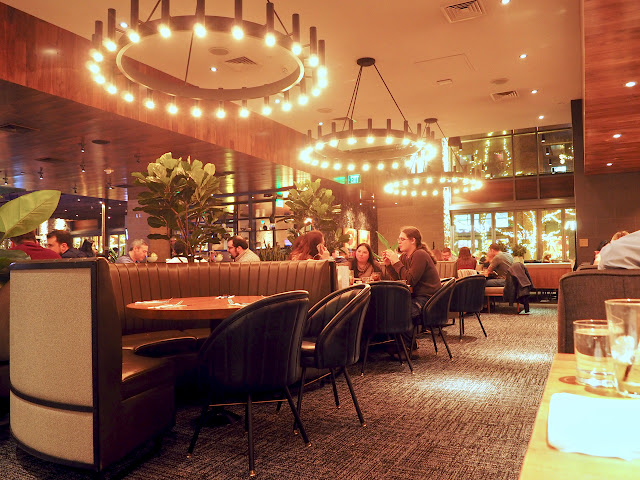 Rain, but of course, however, it sure adds a lot to a nighttime photograph, especially if the area is as photogenic as Bellevue. 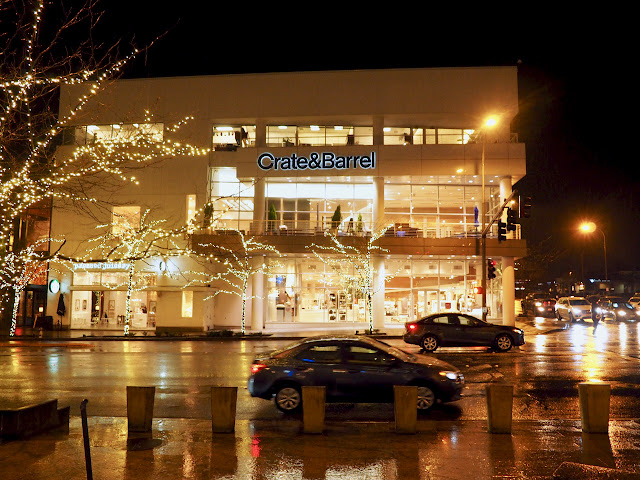 Streets are lined with lovely lit trees, no doubt an effort to ward off the wintertime blues associated with the ever present gray skies. 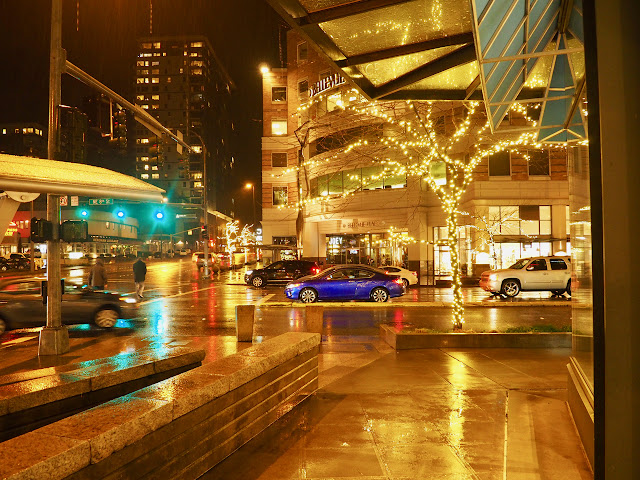 Bruce needed to return to the restaurant around one in the morning, after closing time, to supervise an installation so we were sound asleep by 9PM. Although he'd been worried how things would turn out, he needn't have because it went perfectly. In the morning, while he slept, I roamed around a bit outside the hotel and came across this sweet display. Fragrant too. 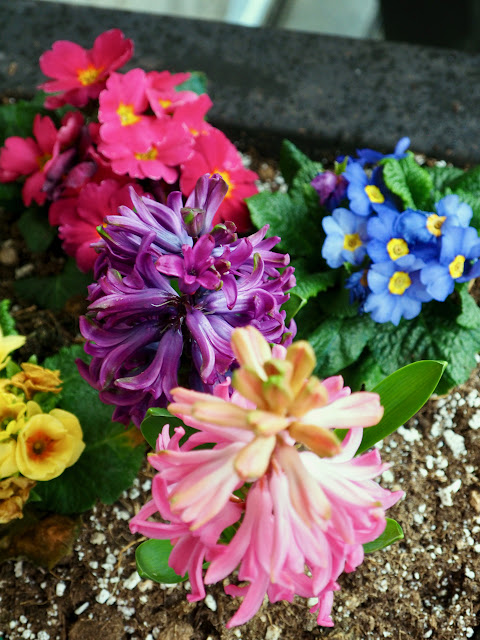 So far so good. Breakfast at the hotel and we were all set to get on the highway which we did. For a while anyway.

About 45 miles from Bellevue, the car began to shake and lose power. Thank God Bruce was able to get onto the shoulder! Thinking it was a bit of a fluke, he restarted the engine, only to have that same shaking business. Not ideal, but we have BMW roadside assistance so that's a start. Shall we have it towed to Vancouver or what? Here's where it gets almost comical, if you like sick humor, that is. Bruce spent more than an hour on the phone with the man who answered the phone to basically get no further along than when he started. Too complicated, however, after charging him $500 to have it towed to Vancouver, only for us to learn by calling the dealership here that they do not honor an American warranty, he called back to cancel that plan. Just as well because no driver could be found to tow us across the border. Finally he says a driver will tow us back to Bellevue and he will be there in 90 minutes. Never relying on someone else's word,  Bruce calls the driver who, as it turns out, doesn't even know that we are along the interstate! Further he says that only one of us can ride in the truck with him. This really set Bruce off, although I will say he mostly remained calm throughout. Bruce asks him what he thinks one of us will do and the driver suggests calling Uber or a cab! Thanks but no thanks. 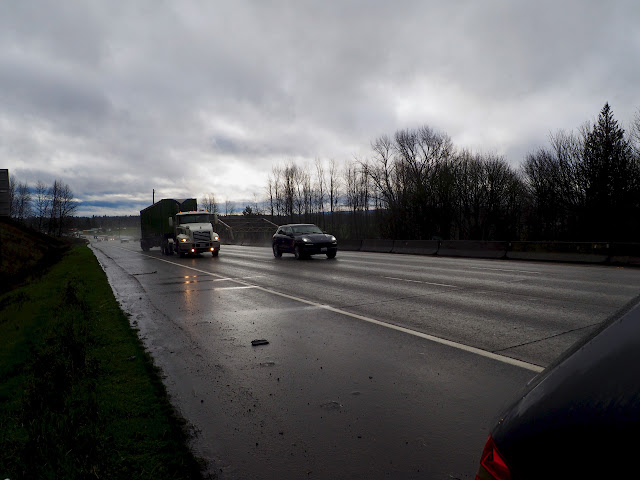 By now it is about 12:30 with cars whizzing by. Thankfully, in our favor, it was NOT raining. Had it been, the whole ordeal would have been so much scarier. Another call, a supervisor engaged, and in what seemed like forever, a driver was found that would tow us back to Bellevue. Another hour waiting. As I was reading a newspaper I'd brought from the hotel, a knock on my window and I was like--thank God, you are here. Except it wasn't the tow driver at all, but a wonderful young man who drove me up to the next exit where I could use the restroom and get us something to eat. He expressed surprise that no Road Ranger had stopped during our now, three hour ordeal. 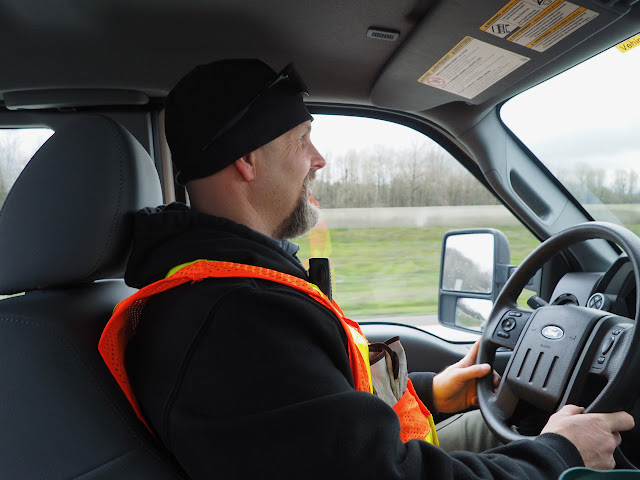 As we were returning, he spotted the driver and stayed with us until everything was set. 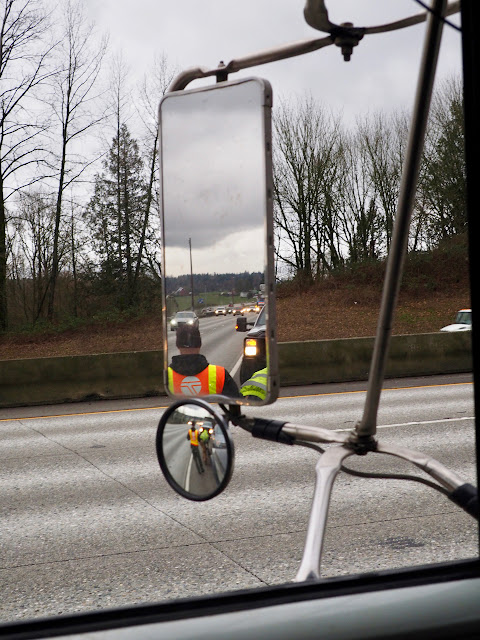 The driver was a huge guy, looking sort of like what you might see on one of those reality towing shows. He did not have a flat bed so he had to build a dolly thing to make it all work. It was getting very chilly and rainy by now so I was sent to sit inside the truck during that 45 minute period. It was SO old and dirty I feared it might break down while towing us! 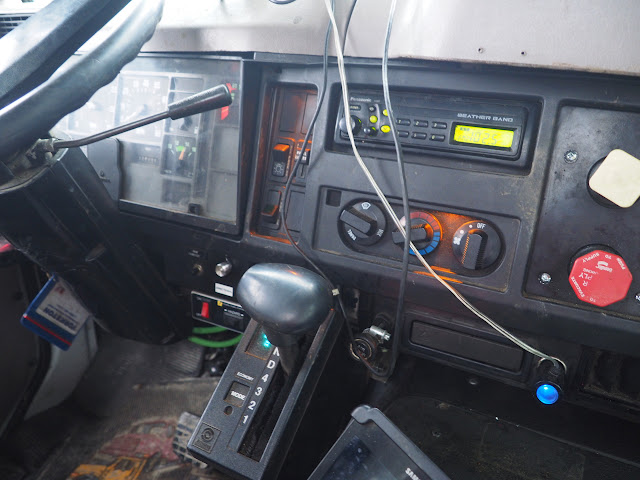 My fear was for naught and here we are arriving on Friday evening about twenty minutes before the dealership was closing. 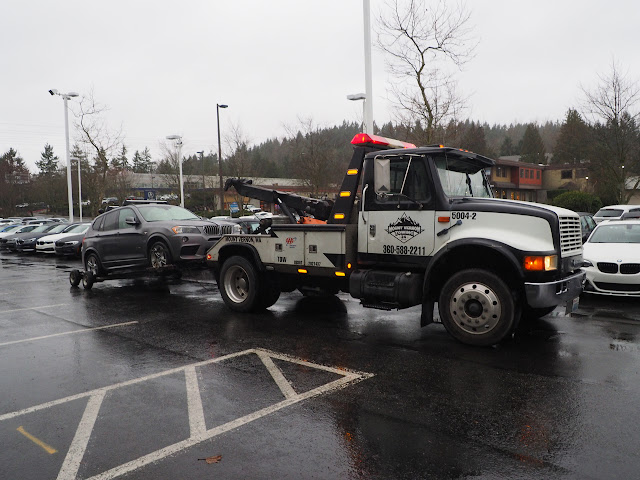 We did, however, have time to learn that the car warranty ran out on January 15. Because Bruce bought it used, he smartly had purchased the extended warranty which we hoped would cover some of the cost. They promised they would check it out first thing on Saturday morning and gave us a loaner car. Back to the Hampton where they thankfully had a room where Bruce immediately made use of the bed. 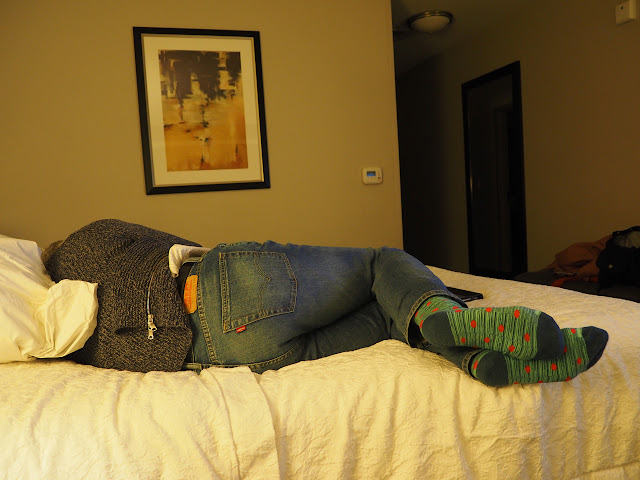 Saturday morning we learned there was a part needed that could not be ordered until Monday morning, not the news we were hoping to hear. Although Bruce wanted to rent a car and drive back to Vancouver, returning when it was done, after our harrowing trip down on Thursday, I convinced him we should just wait it out.

And wait we did.

More to this story soon.