October 10, 2018
The mound of tissues on my nightstand this morning was more of a knoll than the mountain of the previous few days. It is no fun to have a serious cold is it? Well, not having had one for a few years, I'd almost forgotten what it feels like to go through a box of Kleenexes in no time at all. Bless Bruce's heart, these few weeks are rough for him, working overnight and all, so having me under the weather during the few days he was home, well, it was rough.

As you may recall from my last post, he missed his connection in Atlanta while trying to get home. By ten minutes! His incoming flight from Minneapolis was fifteen minutes late leaving him without enough time to get to the next gate. He spent the night sleeping in the airport!! On some chairs! In 25+ years of traveling this has happened maybe one other time. Because it was midnight by the time he got to Atlanta, he slept fitfully until he could board the first outbound plane. You can well imagine how tired he was after last week, braving the snowy weather in Calgary as well as the airline mismanagement. But, having said that, he never complains. He does, on the other hand worry about his jobs until they are complete, so add that to the mix and well, you get the picture. What is happening is that he has been project managing four overnight remodels, two of which are now complete, the one in Calgary is still underway, and the one in Miami is happening as I type.

How's that you ask? Because it is 6AM and I've been up for hours. And why would that be? In spite of the Mucinex Michelle gave me to use last evening, I awoke at 3:30 coughing and coughing. After many minutes I just went ahead and got up and made a coffee cake. And now I am writing. Later on I will be crashing, but I'm okay for now, and when I'm upright the cough is merely sporadic. The final onslaught of the cold, or that has been my previous experience. It began in the roof of my mouth Friday morning, just a funny feeling. Same for Bruce, but he seems to have fought it off. By Friday evening I knew I was doomed. As was Bruce who got very little sleep on Friday night because I was making such a commotion with all of my nose blowing. Weak and miserable all Saturday, Sunday a low grade fever, with kleenex piles galore, I spent my awake time reading, finishing The Great Alone, which was super good, albeit a little, well sappy isn't the exact word I'm looking for, but something along that order. I learned that a movie is going to be made of the book and perhaps editing will help when it comes to the final quarter of the book.

Okay, enough of all that. I did want to say though that it was so weird when I went into the kitchen earlier. The clock in our bedroom read something like 3:45, but when I went into the kitchen the first thing I saw was the digital clock on the range top which read 12:30. What's going on? Raising my eyes the digital read out on the microwave corroborated the bedroom clock. I haven't the foggiest notion of how to change the clock which apparently changed when there was a brief power outage, or so I think because my computer also showed signs of it.  Aw, life in the 21st century.

Last week was all about getting things done that I'd otherwise been putting off. The eye check, the air conditioner, and on Friday, a trip to a podiatrist. 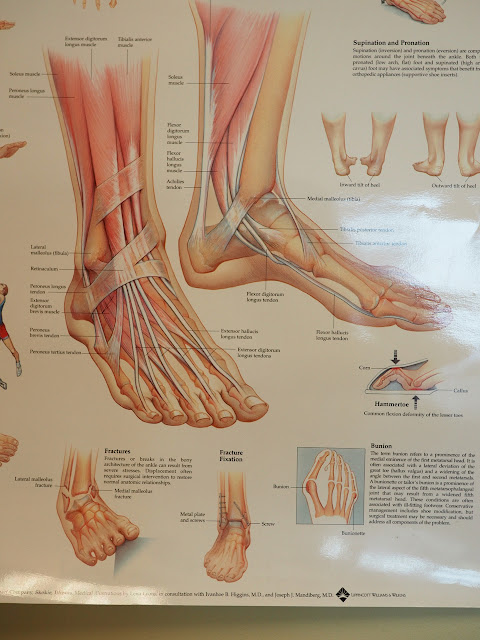 I most definitely had been putting that off to the tune of nearly two years. When it comes to medicine, I'll admit I am a bit of a snob. Unfortunately when I got this little growth on my great toe and was pretty sure it wasn't a wart, Dr. Parillo claimed he didn't know what it was either, and I should see a podiatrist. Skeptical, or stupid, take your pick, I just couldn't bring myself to do so. So, after suffering for two years with this thing, I finally went on Friday only to learn that it is a callus, albeit a deep one, and there is no real fix. She insisted on a foot x-ray which made me even more skeptical, however, she claims it shows that I have a high arch and am putting too much forward pressure on the toe. Does she have something with that explanation? I don't know yet,but I will give the shoe pad a try and keep you posted.

The new dress with the vintage buttons... 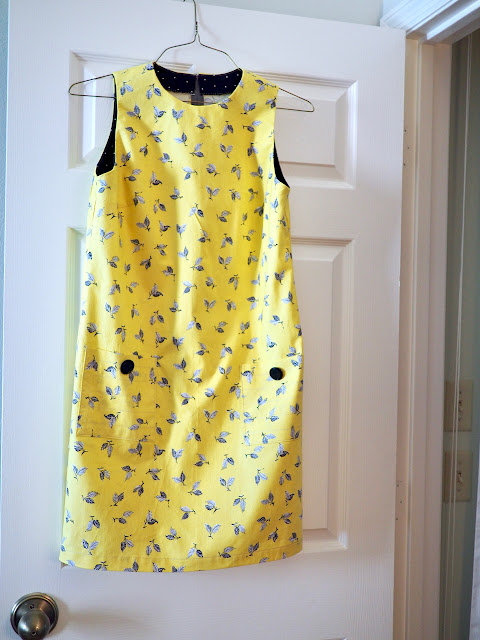 I had to make a stop for more books at my old stomping grounds, the downtown library, which has a "love it" or "hate it" style of architecture. These are some cool blooming plants out front, aren't they? 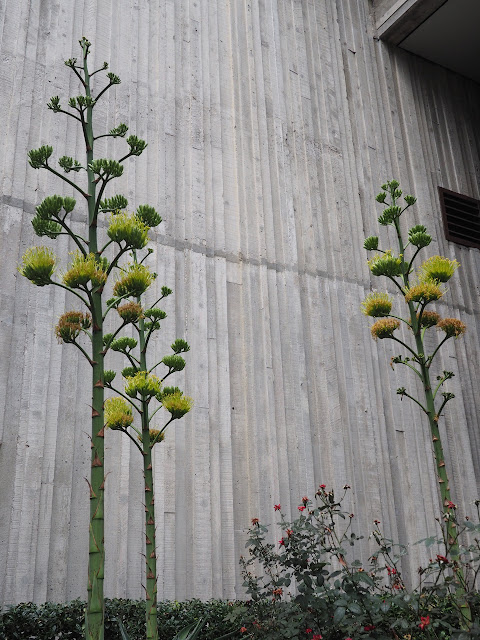 Speaking of plants, we are having a bit of a struggle with the ones on the porch, mostly because we still aren't that familiar with the conditions. I keep forgetting how brand new we are to this home. Picking up something new from Lowes, although I did not buy this Lady Slipper orchid, I couldn't pass it by completely without taking a photograph of the super cool architecture of this bloom 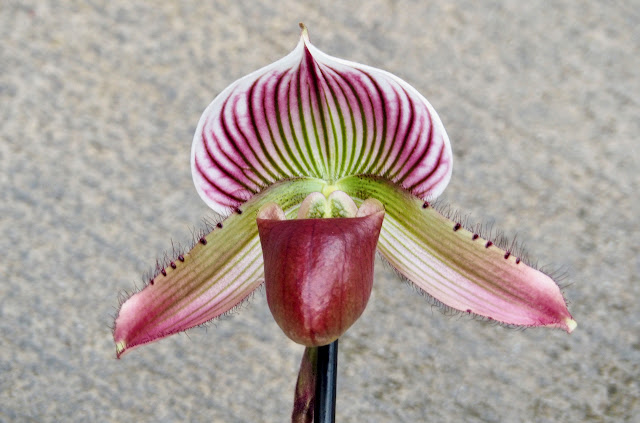 Well, look what I found on the front porch yesterday morning. 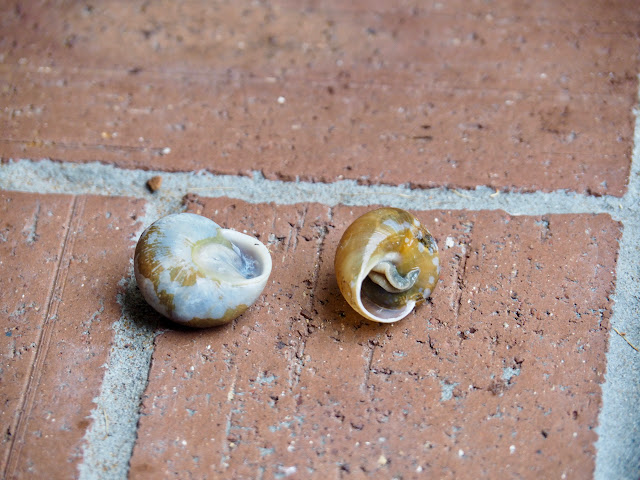 And then when I went to get into my car, this guy was hanging out on my rims. 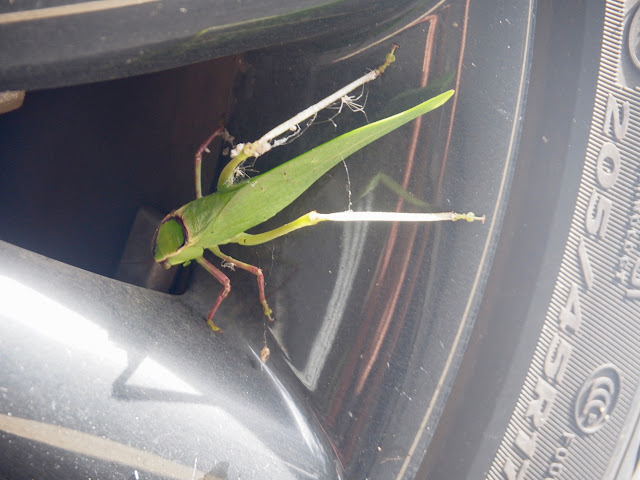 Turns out those are big green wings as I learned when I tried brushing it off before getting in the car. Quite the sight, actually.

As is the back "yard" throughout the day. Oh how I loved this light! 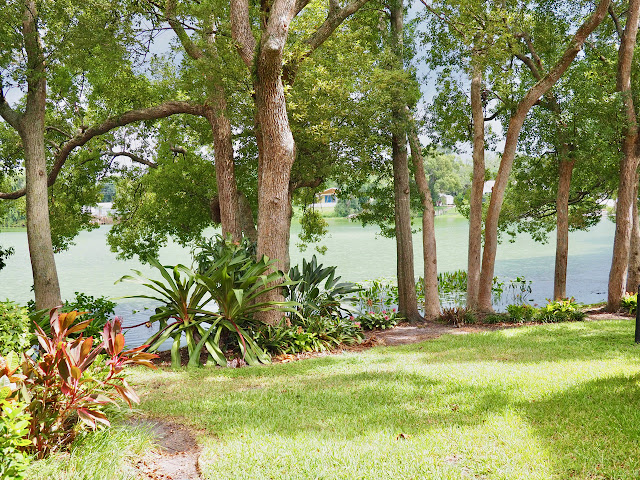 After some dry days, we are experiencing some small rain showers and oftentimes as they come in the water changes color which you know that I also love. 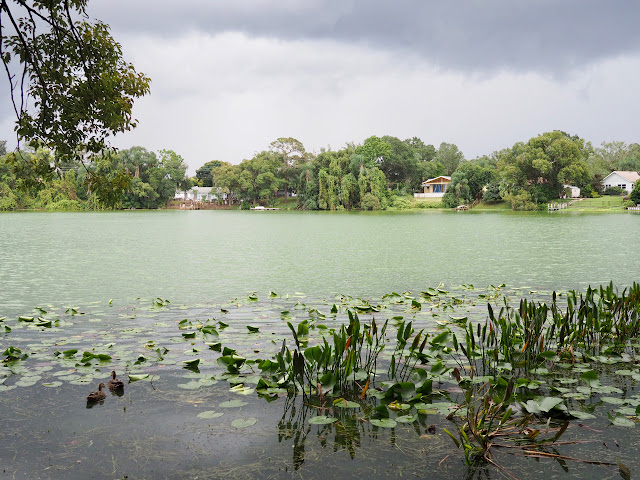 It ranges from inky blue, to bright blue, to this seafoam color, oftentimes all in one day. And how great is that? Pretty great.

As to Hurricane Michael, the effects will not be felt here, but oh the poor folks in the panhandle. Their world is set to turn upside down today. :(

While this is apropos of nothing in this post, I took these photos a few weeks ago, and thought some far flung readers might like seeing what has become of the Pulse nightclub, two years after the tragedy. 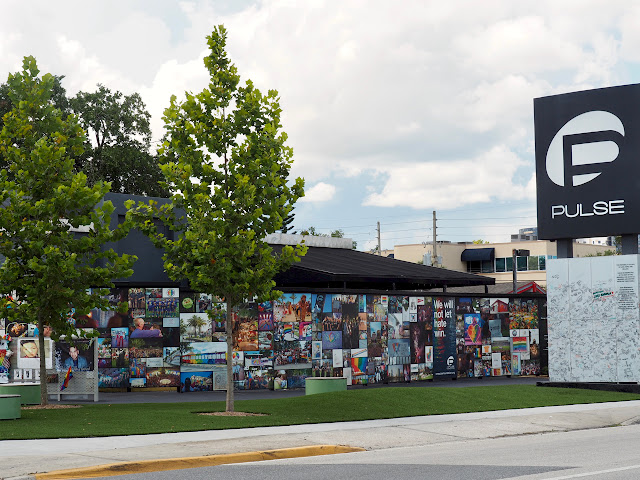 I've yet to stop and study it closer but I need to. This is actually temporary until something more substantial can be built. 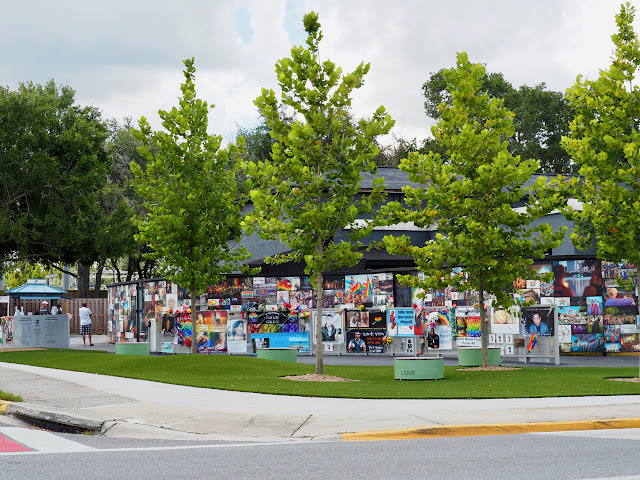 In other news, the kitchen remodel has hit a snag. That brown sink, I learned just yesterday afternoon, has up to a three week lead time. So, instead of it all happening next Tuesday that has obviously had to change. Probably for the best though because by then Bruce won't be traveling and can be more involved. After all, he's the one who gets paid for project managing whereas, I am second string.

Maureen is seeing some improvement from all the physical therapy she is receiving at the rehab center, and in California, Carol is sounding and feeling some better. Before long their sister won't be hacking the night away and things will be looking up.


It is hard to believe that I saw this from my balcony perch last year about this same time. How blessed we were to have finally experienced Autumn! 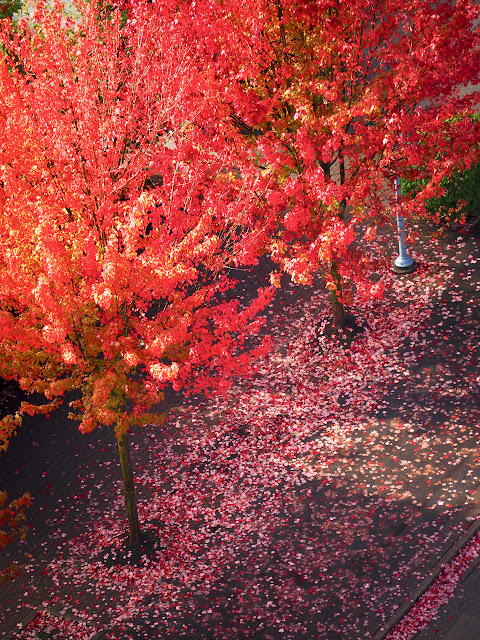 I heard from Jackie who told me that all the trees along Burrard are full of color, making me a little wistful, but that was then and this is now. Right now all I want is my husband home again and this cough to go away ASAP!