I've Gone and Done It!

April 22, 2019
I've been patiently waiting for my new computer to arrive today, however, the delivery guy is taking his time. Yes, finally, after months of struggling, I finally caved and bought a new iMac that I hope will be good to me, doing such things as loading pages quickly and efficiently, rather than making me wait and wait. And wait. Instead of blogging being something I look forward to doing, it has become a chore.

OH MY GOODNESS! Just as I finished the above paragraph, I heard the familiar sound of a delivery truck and it is here!! That said, it has been so long since last I wrote, I'm going to keep at it because it is hard to know how long it will take me to get going on the new one. Hopefully not long.

Back to the business at hand...

You already know that it is extremely hard for me to resist something old and what I consider cool. As such, during a trip to Clermont last Saturday, as in a week ago Saturday, I rummaged around in the SPCA thrift store and for $6.00, had to bring these fruit cups to our home. Not that I need them or anything, but they are made in Japan and so colorful. You understand. 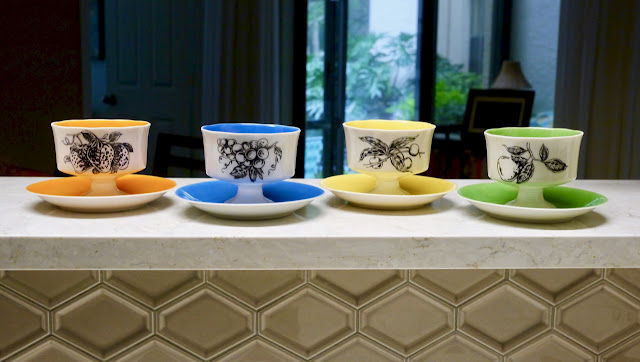 I will skip over that trip, although it was a good one, albeit insanely hot. As will I skip over Palm Sunday. Following that heat spell, the weather has been what occurs only in a dream. Sunny, coolish, low humidity. In other words, perfect.

Tax day found me, following Days for Girls, heading over to our CPA with a check for what we owe the IRS. In the Florida-themed lobby, I saw a couple of these framed scarves. Super neat, right? 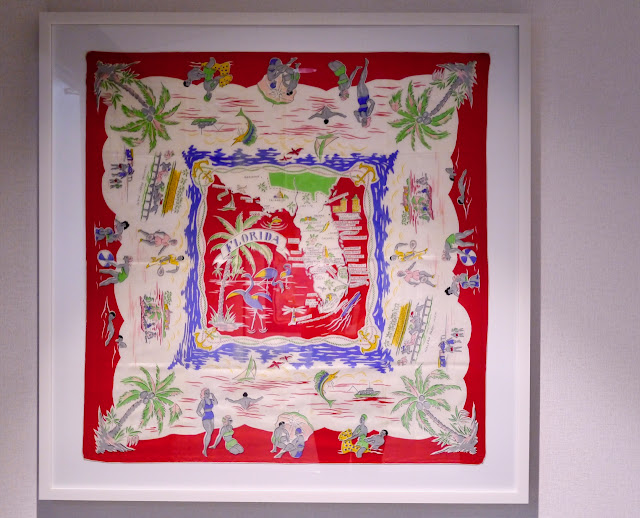 Tuesday, while Bruce was out with the guys, I made a pizza with freshly sliced tomatoes, mushrooms and arugula. I finished it myself, just not all in one sitting. 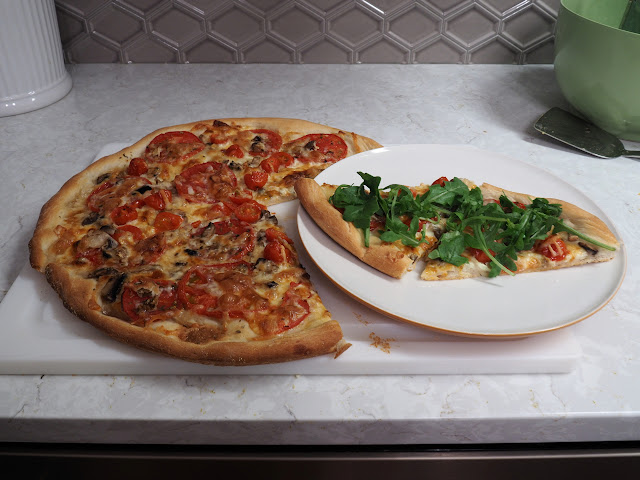 I've been trying to regularly visit Ann next door because she has turned out to be delightful. I made some cookies and took them over soon after they came out of the oven. Now, about those cookies. I'd made the dough the previous evening and put it in the fridge. Never again my friends. That dough was so hard it took HOURS before I could form proper cookies. The first batch of cookies were so tiny! 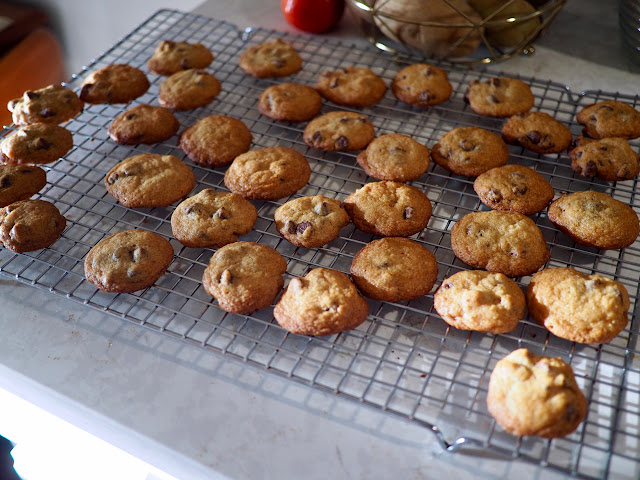 Just some cookies you think, however, I took the photo because I am loving how the sun is coming into the kitchen in the late afternoon, something that did not happen all winter. Living where we do, I am so much more aware of the movement of our celestial bodies. Anyway, Ann allowed me to photograph her when I went crazy for her patchwork Coach shoes. 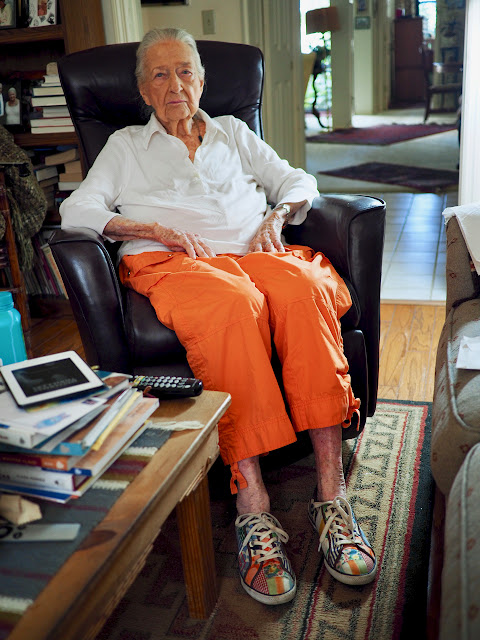 When she opened the door I nearly squealed with delight seeing her in those orange pants! Should I live to be 96, I hope I'm still wearing colorful clothes and shoes. She is sharp as a tack which I would also love to be. I encouraged her to watch Jeopardy because the champion is nothing short of amazing and I'm using that word with the original meaning. Something out of the ordinary. He is certainly that!

I will be the first to admit that when we bought our place I wasn't quite sold on the row of trees lining the lake. After all, they do block the view. 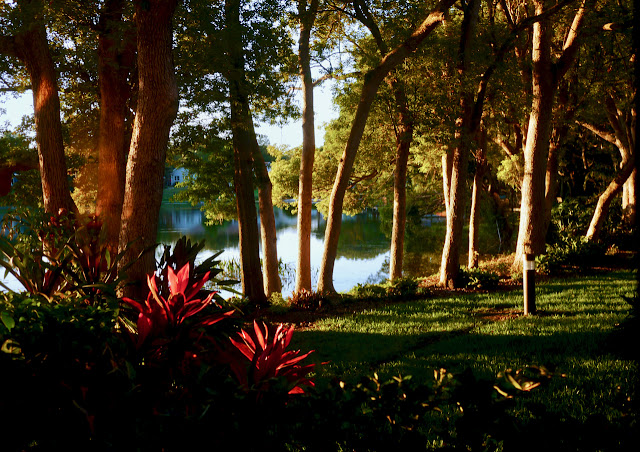 How wrong I was. For years I'd seen this same spot from Ferncreek and wondered about it, but now that I live here, I've come to realize how much interest they add to my day. I took this photo when I was out in my kayak and we are hidden behind the trees to the left of the building. 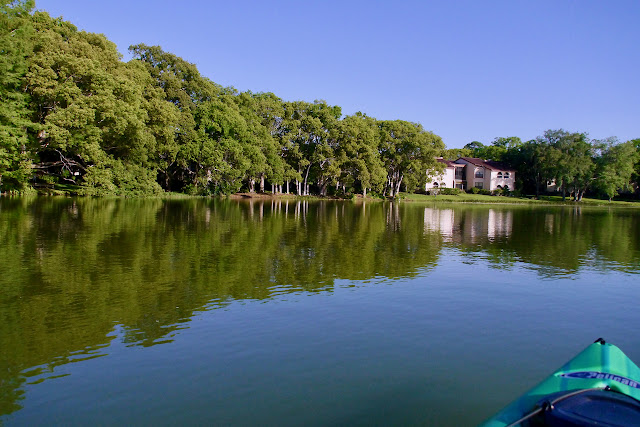 Some friends came by Saturday afternoon who hadn't been here before and Lisa marveled at how the wind rustled the leaves so pleasingly. And there's the birds who fly in and out of those trees. What was I thinking?

During that same kayak excursion I finally was able to get a good shot, or sort of good anyway, of the newest batch of Wood ducklings and Mama and Papa. 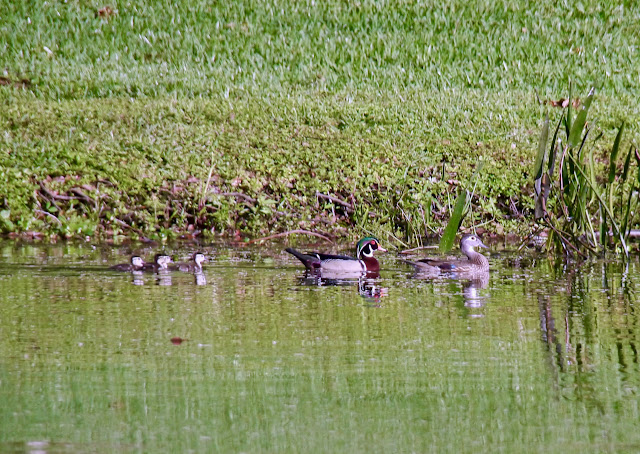 These four little cuties have been around for at least a week now so I'm feeling very hopeful. Just watching a woodpecker out the window....keep focused Gail, keep focused on the task at hand.  Another first for me happened, and had my computer not been giving me fits, I probably would have posted this days ago because I was so excited! I get that way you know. Out in the kayak on the big lake I watched this for a while and yes that is a Red-Winged Blackbird hopping on a lily pad. 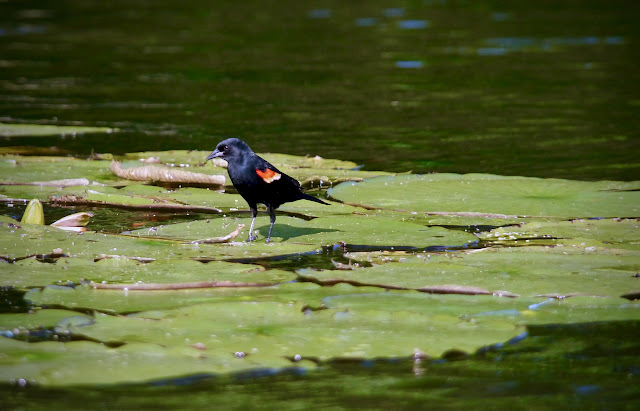 Oops, almost forgot this photo. As the Wood Duck family was cruising along, I spied this on the building and apparently they felt the presence because they immediately swam into the reeds to hide. 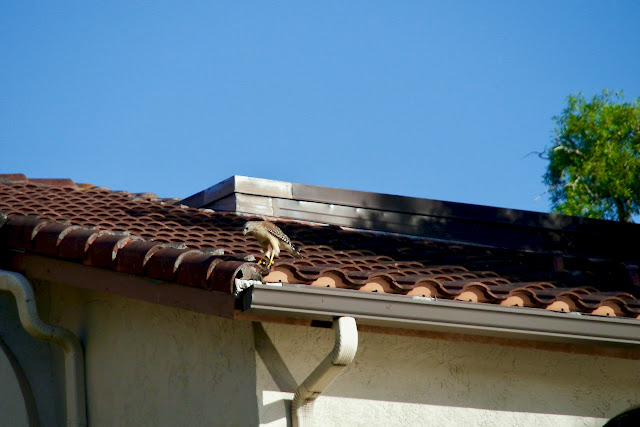 Another thing about when we first moved here that was a little discouraging was the presence of all sorts of downed limbs and murkiness along the shore. In time, we've managed to remove the limbs and as the water level has gone down during this dry spell, we discovered some steps heading into the water. I raked out loads of fallen reeds and Bruce sorted out the stones and now we have a super place to launch the kayak! 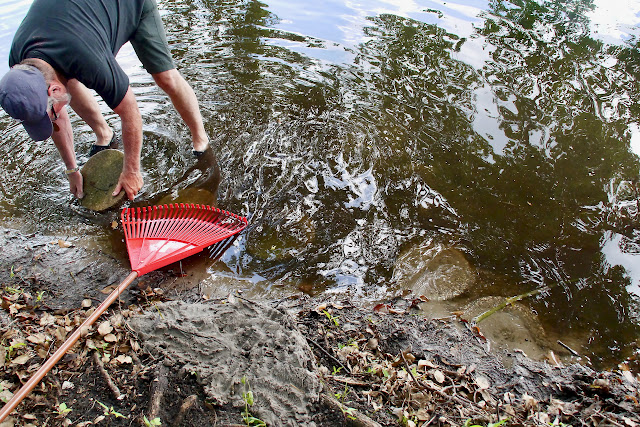 Oh if only they would allow us to build a dock, but that is not in the cards. By now you are probably sick of me going on and on about how much I love it here, but can you blame me when I see stuff like this: 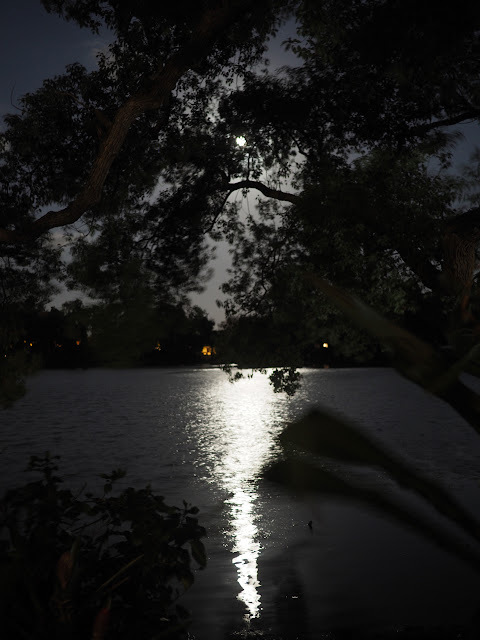 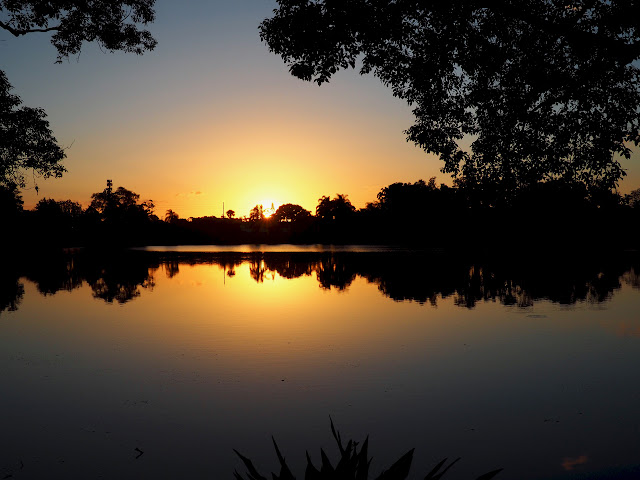 Oh yeah, and there's this kind of thing... 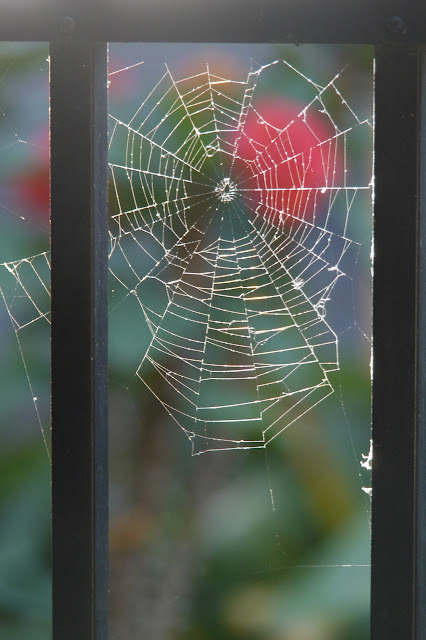 And in the front gardens I can always find butterflies. 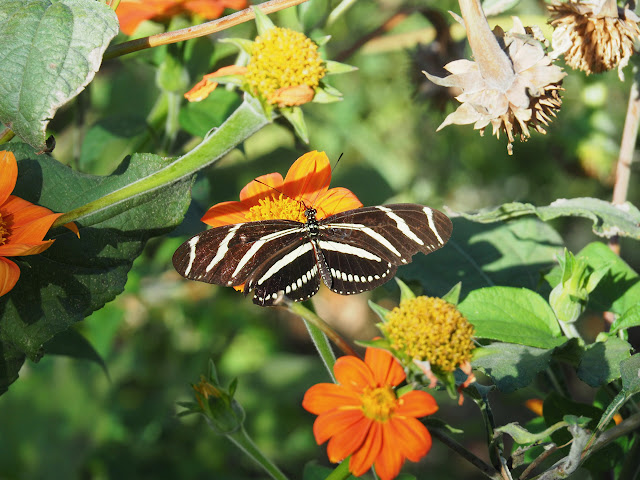 My little garden is coming along, and although I have plenty of Pentas, no butterflies have found them so far. You notice that I said not so far because, perhaps, like the birds, eventually they will come. 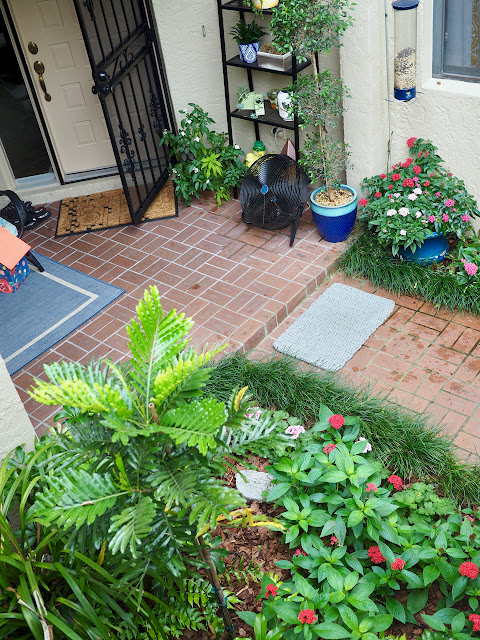 Have I shown you the second wave of yellow Tabebuia trees blooming all around the city? What an unexpected blessing, somewhat like what happens in Vancouver with the Cherry Trees. Just when you think the beauty has passed, along comes round two. 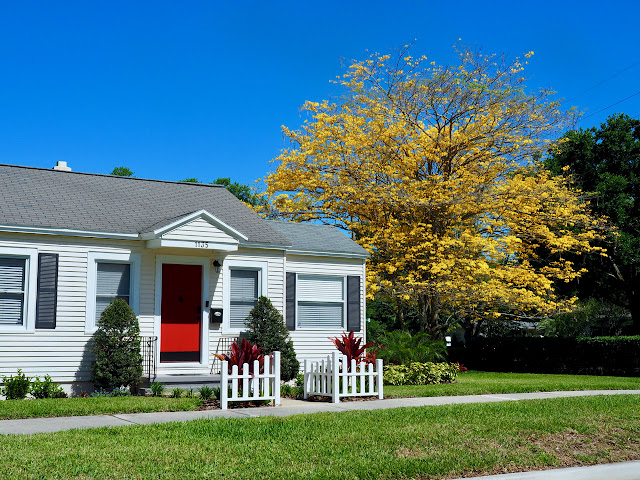 So I told you the tile guy came to measure and we set a date for installation. As to the demolition of the existing tile I did not tell you the plan. Bill insisted he could help Bruce and they could do it together for a fraction of the $800 charged by the contractor. Do not, I repeat, do not believe what you see on television because now that it is done, there was nothing fun about it. Bruce began Friday night in order to carefully expose the plumbing. 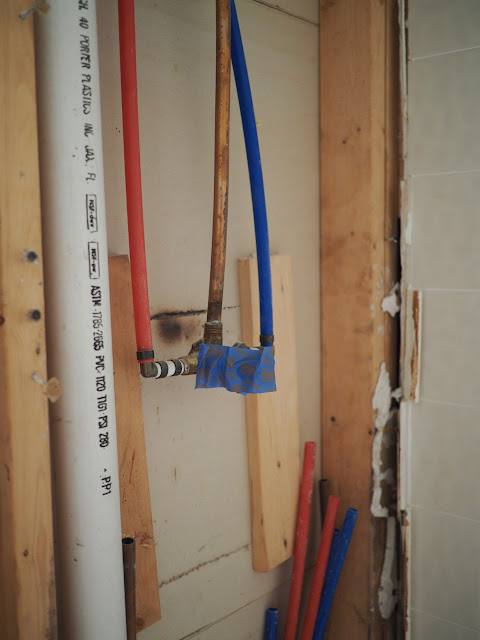 There was tile and two layers of drywall to remove. I'm including this shot because, well, it is so Bruce, what with the little cover for the faucet and all. 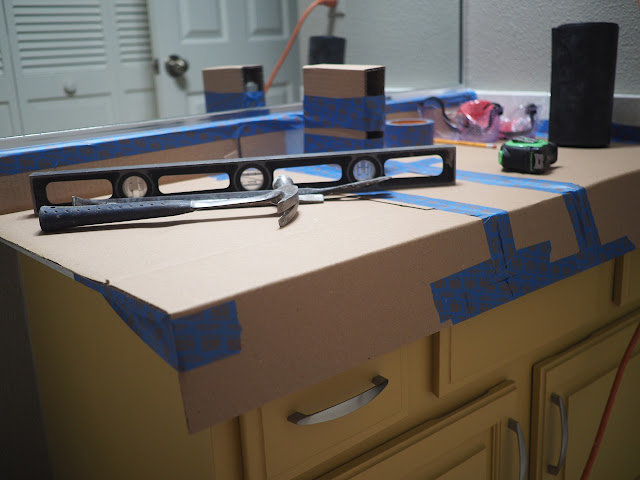 Arriving a little after 9AM, Bill went to work with a hammer and chisel, discovering that the tiles did not pop off nearly as easy as he'd anticipated. 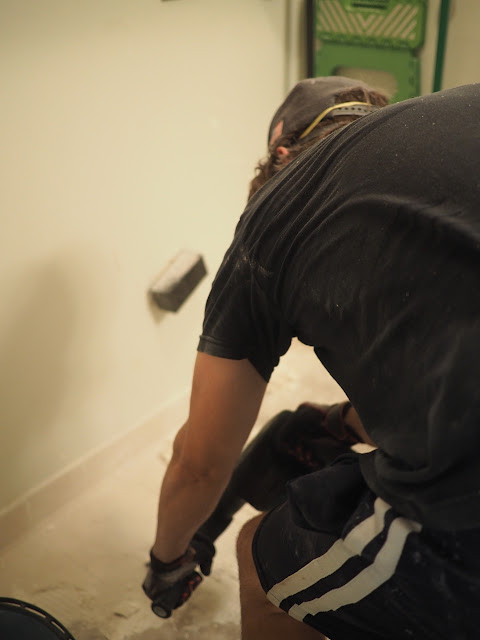 Let's just say that it was a very dirty, messy job made easier once I rented a mini jackhammer at Home Depot. They worked so hard! I played a part in the clean up crew, doing nothing like they did, and still I was tired when they day was done! Thank goodness the weather was perfect because having the two of them in that tiny space with all that dust and heat too--I hate to think of it!

Then it was Easter Sunday, and what a glorious day it was! The church was filled with the sound of beautiful music and flowers that I had to examine close up. How clever is that putting a lily inside the vases? 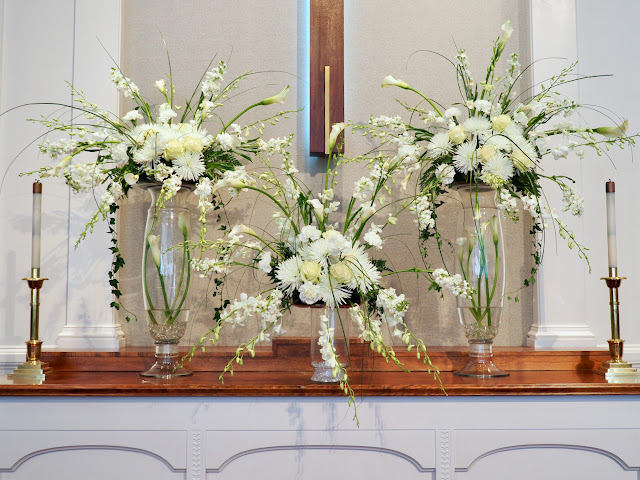 And as is the tradition at First Congregation Church of Winter Park, there was a cross decorated with flowers brought by the parishioners. Having your photo made beside it is also traditional. 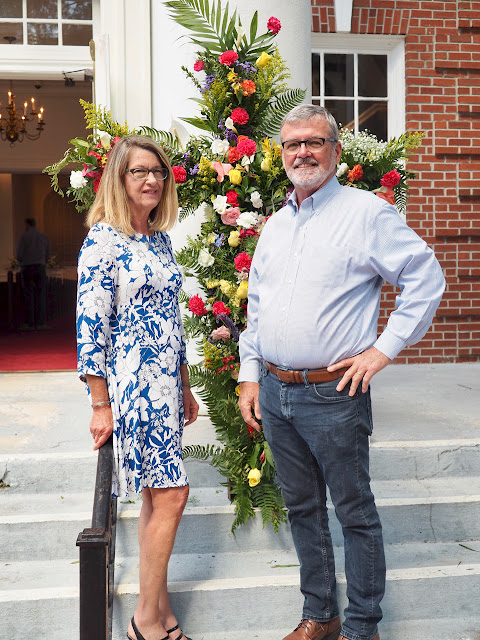 For posterity, you know?

Well, this is a condensed version of things which I also post for posterity. You know how my memory is. :)

p.s. now to set up the computer...wish me luck!