I'm happy to report that things went super good with the help of lots of folks, foremost Bruce because he did everything non-cooking related the morning of Thanksgiving. Can't eat without a set table now can we? Everyone pitched in and it all went off without a hitch. I had so much food I had to use Angela's oven! Here's what we ate, in order of consumption:

So now you know just how much cooking I did! The thing is that I know cooking very well.....Lord knows, I've had my share of practice. When cooking big meals I reflect on all those years of making meals for six, sometimes three times a day. It's a wonder I got anything else done! I'm good at keeping the kitchen cleaned up as I go, timing things, and hopefully making tasty food.

We all had fun and the weather, which had been gray and gloomy for most of the week, turned spectacular allowing some to eat outdoors by the pool.

Thanksgiving may last for only hours but the work involved lasts for days around here. We had some leftovers which produce all sorts of more dishes, and I've just finished the laundry with all of the dishtowels, cloth napkins, and tablecloths. All well worth it might add....

Friday Bruce and I met Dana for lunch at Graffiti Junction, finally getting to catch up with her. She's been so busy of late we've not seen much of her. She's been leaving the market in others hands, which is fine, but no one is as good at managing the market as Dana. After wards we strolled a bit and came across a super cool gallery around the corner. These shots were taken in there. The stair one requires you to take a second look...the green on the left is a reflection off the stairwell wall. Cute little airplane don't you think? 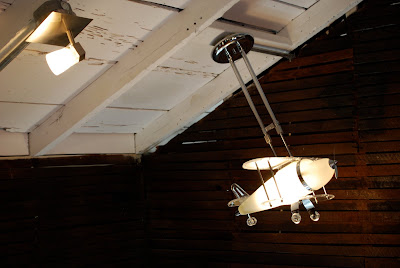 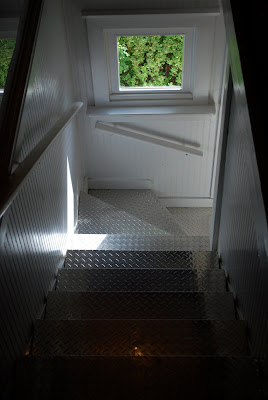 The Florida/FSU game on Saturday afternoon was a loss as expected, just not as big of one. :) :(

Surprisingly there were loads of people at the market on Sunday. Our market neighbors, Jim and Kathy took the week off because last year was terribly slow. I purposely didn't look at my last years sales before we left so as not to be too discouraged. Arriving home later I discovered that my sales were right around four times what they were last year! Good deal.

Before it all slips away I wanted to revisit the DeLand show. It is so funny how things occur in life. The week before the show while doing my museum stint, there were only two visitors all morning. It was just as well because things were in such disarray, but I digress. I chatted for a bit with a really nice couple visiting from North Carolina by way of Ft. Lauderdale. It's complicated.. Anyway, the man was taking pictures and even one of me and his wife. I mentioned that I took pictures and would be doing an art show on Saturday/Sunday in DeLand. I didn't even have a card to give them! Saturday morning, not too long after we were set up, there were lots of people in our booth but I spoke to one woman saying, I recognize you! She reminded me from where--the Polasek! Apparently, they were on their way back to NC and deliberately stopped in DeLand to see me. Can you believe that??? Additionally, she ended up buying prints for everyone on her shopping list!!! Bruce threw in a few because she couldn't make up her mind!!! How sweet is that??

Another customer that I wanted to share was a young man late Sunday afternoon. Turns out he'd done three tours overseas, two in Iraq and one in Afghanistan, and was preparing for another one when he broke his hip on a hike. Now this isn't just any hike, but a sixty mile hike with a seriously loaded pack!!! He surprised me by saying he was disappointed, he loved being a Marine. He also confirmed what one of my classmates told me about Iraq--the smell is horrible, one of the worst parts of the whole experience, yet you rarely read anything about that aspect. He told me that not only do people throw their garbage in the streets, they also don't hesitate to defecate there as well. We take much for granted don't we?

The last customer I wanted to mention was a couple who arrived when it had just begun to rain on Sunday afternoon. Although I didn't recognize them they'd apparently visited my booth on Saturday. The man walked in saying he wanted to buy my "Beach Daisies" canvas, a $75 purchase. Naturally I was delighted, a good way to end a show. I was even more delighted though by the story they told. Apparently, the man had a seizure nearly six months prior and was put on Dilantin. While taking said medication driving is a no-no. He was buying the canvas as a gift for the girl's mother who had faithfully driven him to work each, and every day, for six months. How's that for a sweet ending to a show???

That said, the above holiday is especially meaningful as I have so much to be grateful for.

Anonymous said…
This comment has been removed by a blog administrator.
December 1, 2009 at 4:03 PM