Nothing But Good Stuff

August 14, 2015
Sunday afternoon,  much to my delight, two of Sam and Mary's girls, along with their guys, came to visit me at the market. If ever there were two sweeter young woman, I haven't met them. That's obviously not true because I do have some wonderful young women in my family, but you get the picture. While visiting, they dropped off a bag of goodies from their Mom and Dad.

Both Sam and Mary are incredibly talented, AND incredibly resourceful. Mary is one of the first people I knew who planned her Saturdays around garage saleing. Google tells me that's not a word, but let's pretend it is. Anyway, she is always on the lookout for things she knows will bring her friends joy. Sam is a woodworker, and knows his way around saws, so when someone asked him to cut books into alphabetic letters, he was all over it. He even made one for me with cardinals on the front no less! 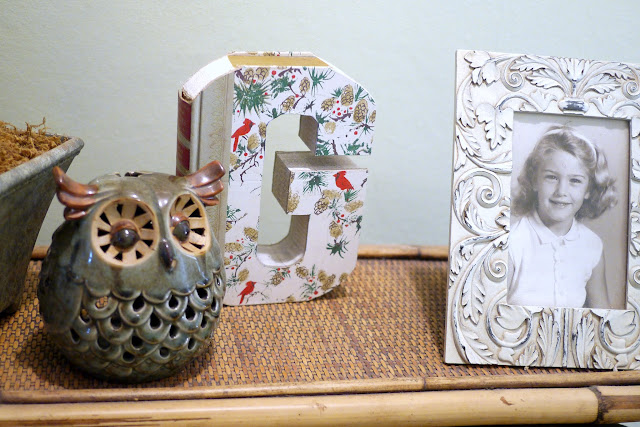 Isn't it cute?? Mary snagged this little cutie because it was both orange, and a MINI Cooper! 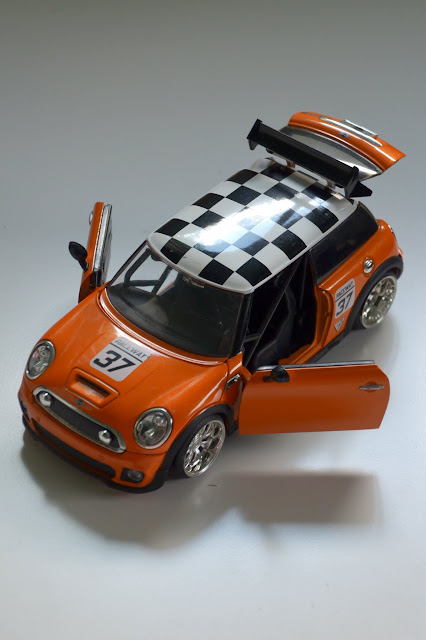 You know how much I would just love to have the real thing! Bruce keeps encouraging me to just go ahead and buy one, and I'll admit, I'm sorely tempted, however, my frugal nature keeps me from doing so. Then again, you only live once???

I think it must have been Wednesday night that, while locking the side door, I noticed an excellent sight--a huge, and I mean in the hundreds, of birds flying from the West at sunset. 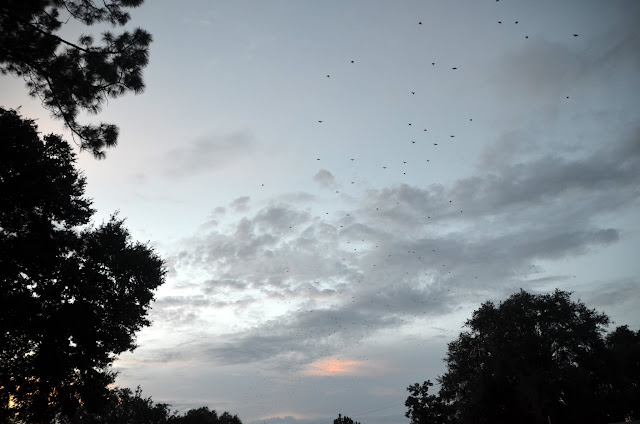 Shoot! I'm getting ahead of myself because I saw two crazy things earlier in the day, one of which my Mom might have gotten a kick out of. 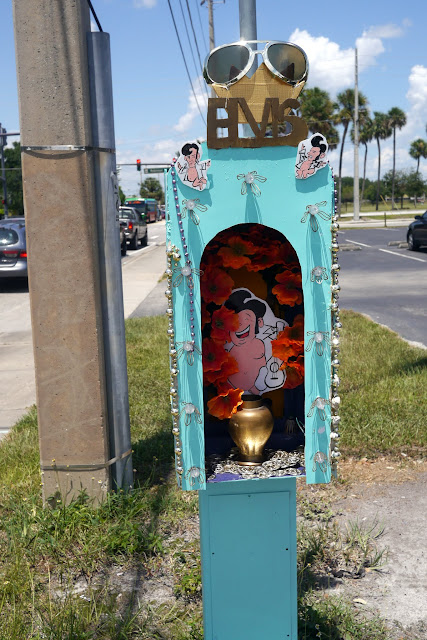 A former phone booth, using that term loosely, is now a shrine to Elvis. Our Mother was such an Elvis fan she requested one of his songs for her funeral, the title of which that I cannot recall anymore. I need to drive by this at night because I'm pretty sure I noticed a solar receptor underneath the sunglasses.

In the nearby shopping center, I was pretty much stunned by this: 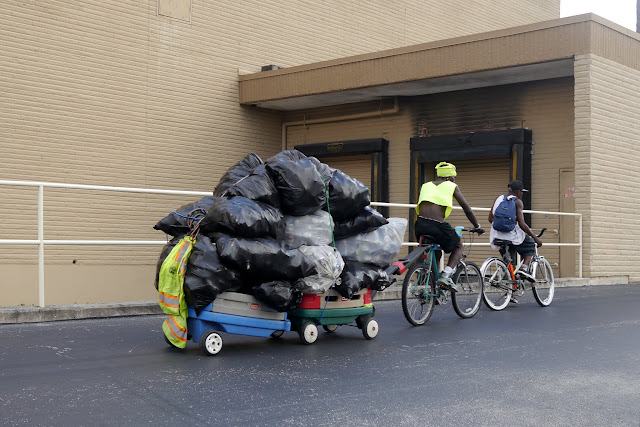 Unbelievable, right?? I've no idea where they came from, nor do I know where they were going, but that's a pretty resourceful operation don't you think?

After five days of no rain, our grass was looking mighty pekid, prompting me to finally let the sprinklers run on Thursday morning. As is more often the case than not, when I do make that move, it rains. Running a few things over to Bill's house Thursday morning, the clouds started rolling in. This is a view towards downtown Orlando from the Lake Underhill park. 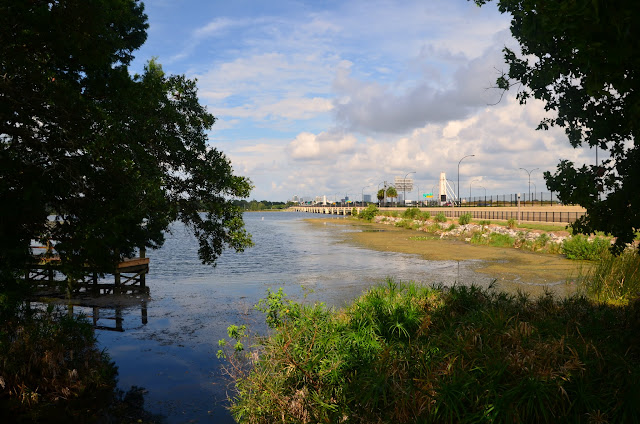 Well, indeed those clouds did mean rain, and it was a whomper! Two inches fell during the course of an hour or so, with huge thunder and lightening, scaring the dickens out of Baxter. He'd prefer I sat down and held him, but in this instance he had to be content with hanging around my legs in the kitchen while I made a nectarine cake. Tuesday I bought a box of them from the Fresh Market and are they ever fragrant, tasty, and beautiful. My very favorite summer fruit. 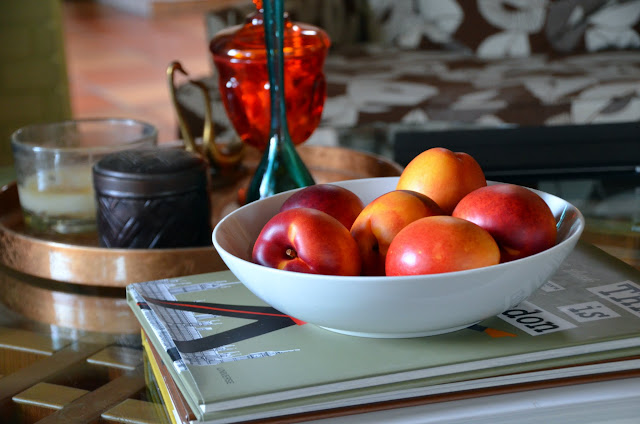 Aren't they just perfect? We tried the coffee cake this morning; a shout out to Ina Garten's delicious recipe.

Fortunately the rain stopped by the time I needed to pick up a friend at Dr. Phillips Hospital, my old stomping grounds. That said, it is barely recognizable to me what with all the expanding they have done since I quit working. There's a super view of the new Orlando Eye from Turkey Lake Road. Against the dark sky it was striking. For the record, holding the camera up, this photo was taken without looking to avoid injury to either myself, or those nice folks on the road with me! 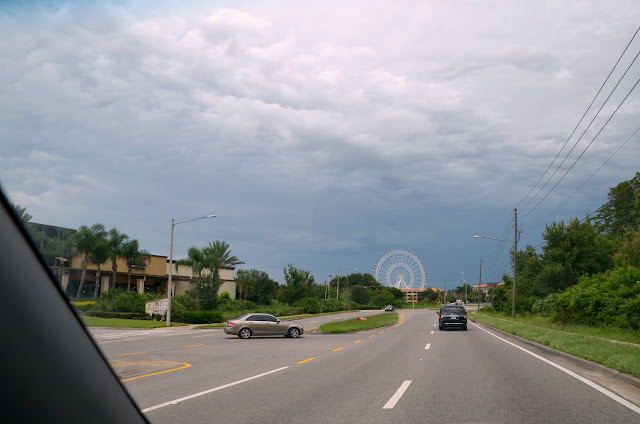 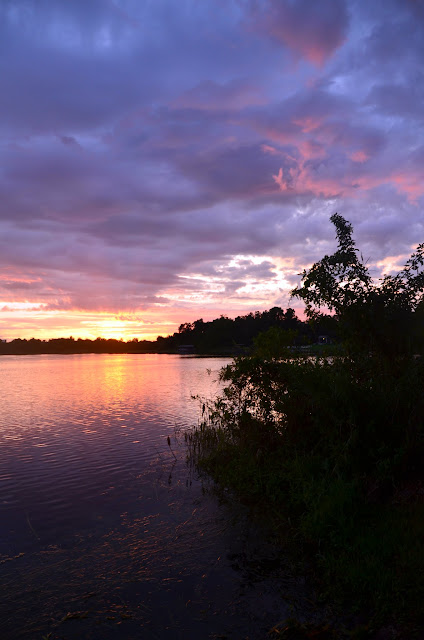 Allegedly there is an 80% chance of a repeat of yesterday--we shall see soon enough. While it was still dry this morning, I rode up to the dry cleaners with Bruce's dress shirts on the back of my bike. Riding a little bit in the neighborhood behind there, I heard the sounds of the Boone High School marching band. Well, why not take a peek? The football team were getting ready for Friday night lights, 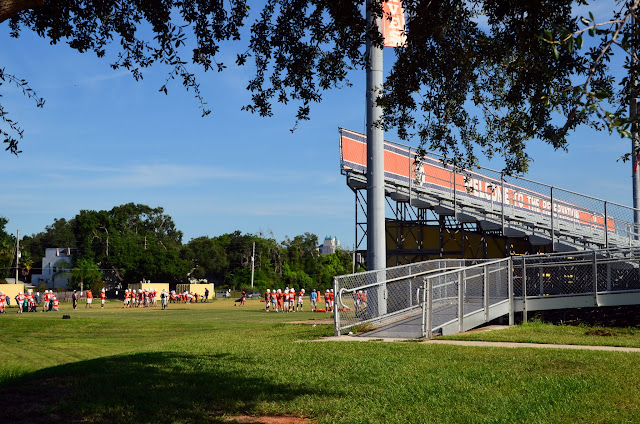 as was the band. How those kids do it in the summer heat is pretty much beyond me! 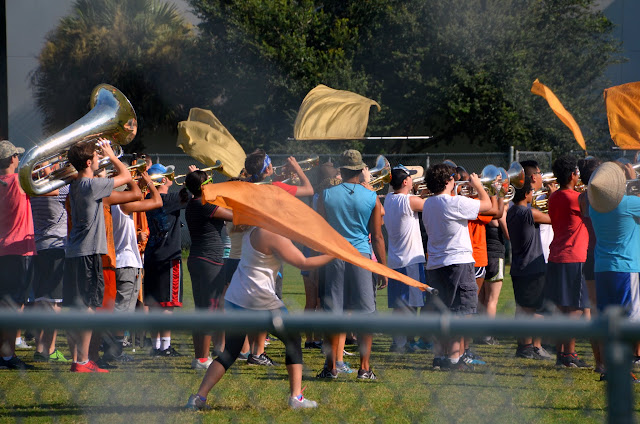 Welcome to the Reservation indeed! For those of you who don't already know this, the entire Peck family went to Boone, some a long time ago, some a little less long ago.

Finally, my sweet Matthew stood in a line for several hours last evening in order to get a book signed by one of my most favorite street artists, Stik.  It is hard to believe it has been three summers ago that B and I went on the Street Art tour in London, and learned all about him. Oops, finding this photo in my library, turns out it was four! 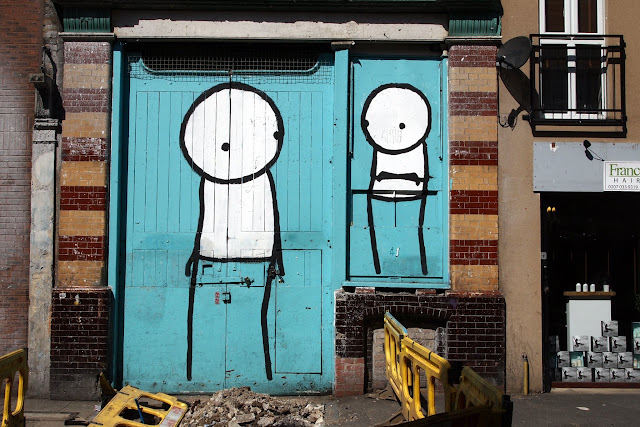 Have I been blessed with awesome sons, or what??

Have a lovely weekend,