I Took a Bicycle Ride Today

March 04, 2016
Now, any other time, that title would not be newsworthy, however this last month has been anything but normal. Remember how I bemoaned the weather in January every chance I got? Well, February turned out to be pretty much spectacular weather-wise. You know, the kind of weather that explains why Florida now boasts a population of over 20 million people.

Anyway, Lisa has come to help Maureen for a few days, and with nothing but blue skies this morning, I got on my bicycle for the first time in more than a month. Nature has been, oh so busy, in my absence, beginning with the beautiful blooming peach tree just down the street. 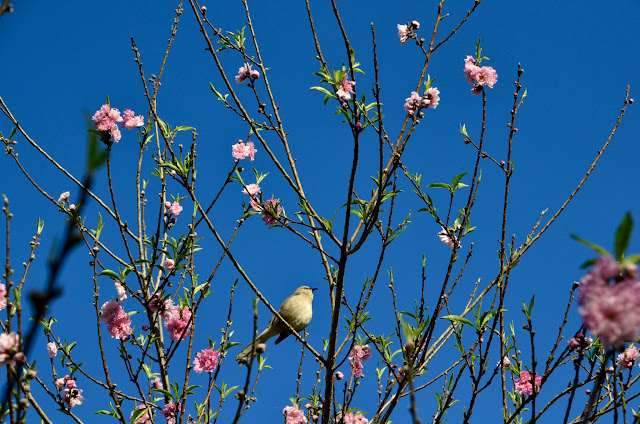 Gorgeous pink blossoms against the deep morning blue sky with a mockingbird for good measure!

Earlier, before the break of dawn, I'd gone out to put yesterday's paper in the recycling bin, and I'm pretty much obsessed with this bare tree, as I am this time every year. Mostly the tree is a pain in the neck, what with all the things it drops, but I am rewarded this time of the year. 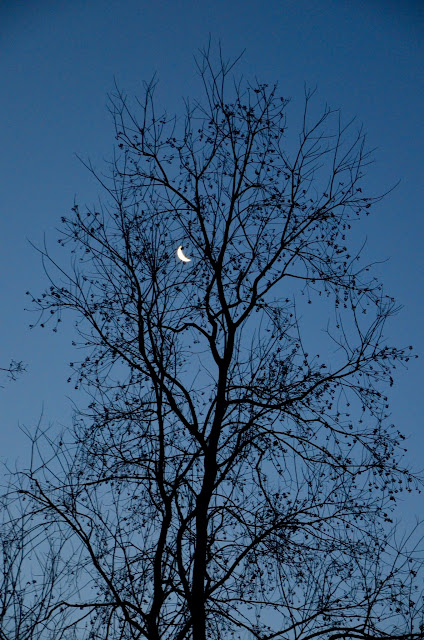 March first, I rose way before dawn, and doing the same thing, I saw the waning moon and Saturn and Mars!! Not that I knew what I was looking at, but someone did. A quick Google search and I knew exactly what was surrounding the moon. As well, there was a very bright star of Saturn that I've forgotten the name of. No surprise there.

Continuing my ride, I made the turn onto Ferncreek and was immediately struck by the wonderful fragrance of an almond tree. Or, that is what I think Sue called it because of the fragrance. No nuts as far as I know. Anyway, the smell is divine. 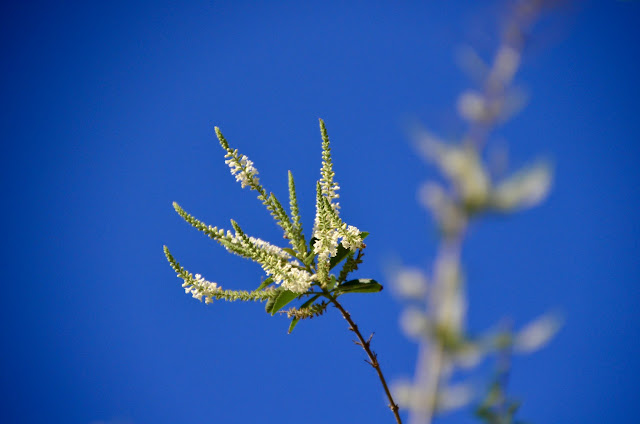 Hibiscus of every color are blooming...red, 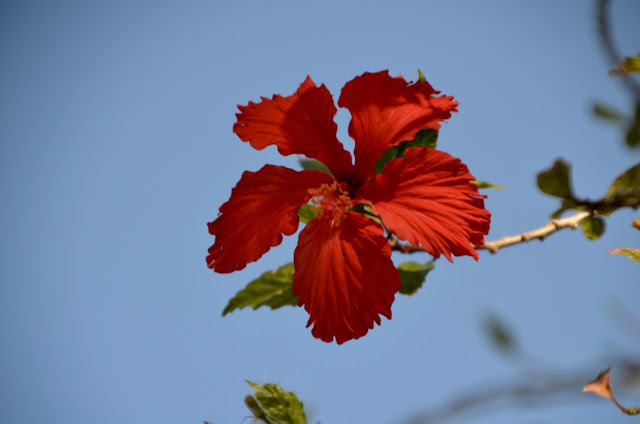 and my favorite color too! That said, the red is pretty nice, isn't it?

Speaking of favorite colors, our niece Laura just loves purple. While selling photography, I learned she is not the only one to love the royal color. 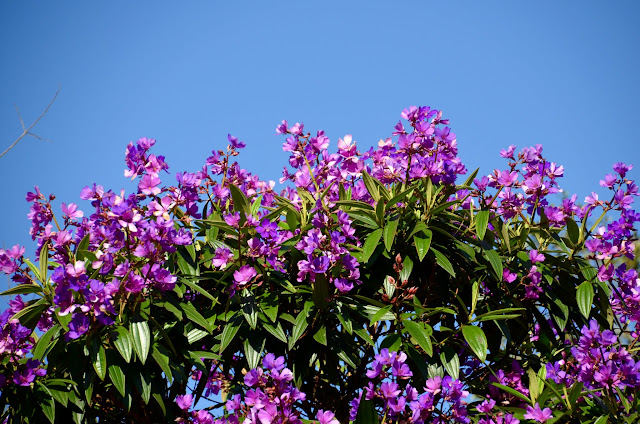 In the little bit I've been out and about, I have not seen many Tabebuia trees in bloom, until today. 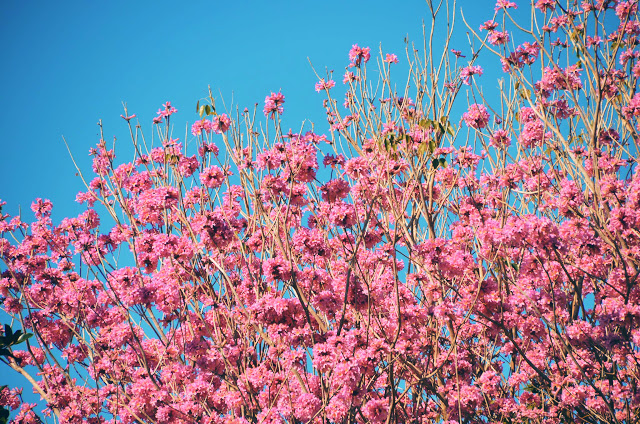 And now you know why I originally thought to title this post, "nothing but blue skies," however, that may have caused some confusion because some of you might be tempted to think my last post was overly dramatic. It was not. Although things are improving, it is still going to be quite a struggle for Maureen. Bruce ended up filing the openings a bit on the tray in order for it to fit snuggly, but not so snuggly she could not get it off by herself. I made her lunch and had her practice moving it from the counter to the table. 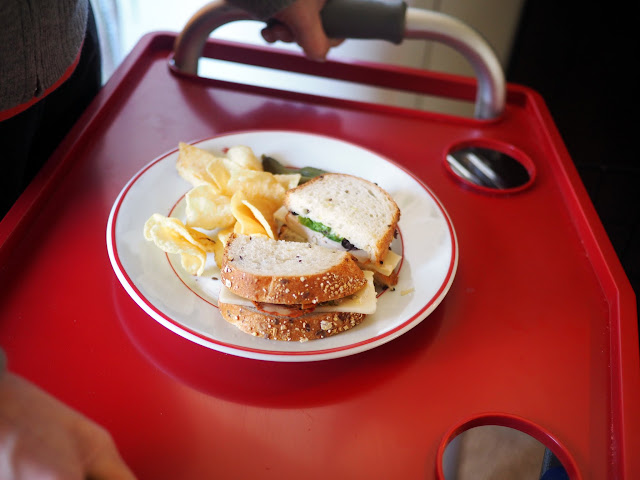 Because I was there, I used glass, but I'm urging her to only use plastic in my absence. We had visits from home health folks, a nurse named Caroline, a physical therapist named Patty, and a very lively occupational therapist named Ginger. Ginger may not be exactly right, but the lively part sure is. They will come two days a week for three weeks to guide Maureen through her recovery. The last few days, I've had her walk outdoors in the lovely weather. 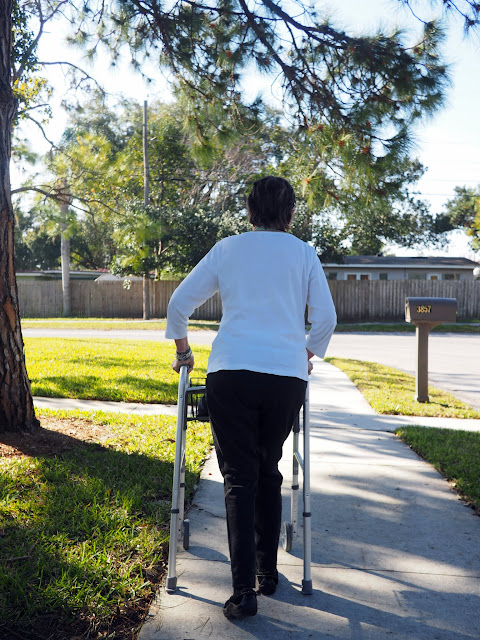 It is not easy, but according to Patty, the more she walks, the quicker she will heal. This was just a walk to the corner, but yesterday morning we walked for about four houses and back! Baby steps will lead to longer and longer steps. That is the plan anyway.

As well, it seemed like the time for an outing, and because Maureen had never been there we went to Trader Joe's. Had Bruce known about the wheelchair without pedals, he would have told me it would never work, but he didn't, so we went. 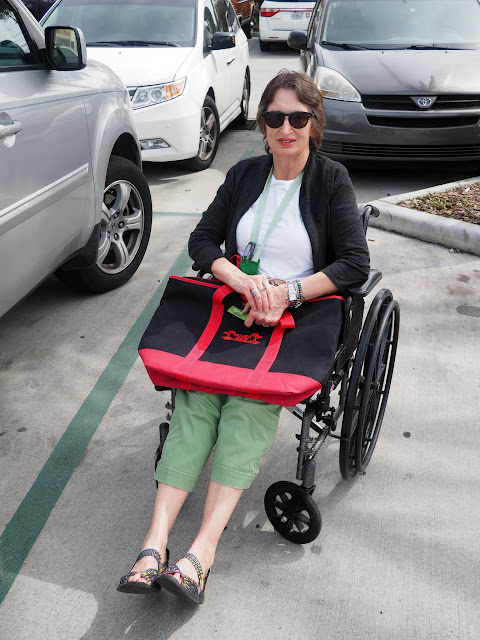 He would have been right. No pedals made for a very short visit. The green ribbon around Maureen's neck is the for the makeshift pouch I made for her mobile phone so we are only a phone call away. The sweetest thing happened though...the girl who checked us out realized our struggle and after bagging the few groceries told me she would help Maureen out of the store while I got the car. Perfect!!

Even more perfect was that as I was maneuvering the car adjacent to the sidewalk, the girl went back in the store, returning with a bouquet of flowers for Maureen!! Witnessing that kindness immediately brought tears to my eyes. I'll say one thing, getting into a Honda Pilot is no easy feat if you can't use your legs very well. Nonetheless, she did it and I left her at home for an hour or so before her doctor's appointment which was basically a formality so he could authorize her home care.

Then it was time for some Longmire. When you have hours and hours of time to kill, you can have no better friend than Netflix. Convincing her that she would love it, I set it up the other day and indeed she does. Instead of fighting her body, that sometimes has a mind of its own, she can watch another episode of Longmire and settle down. Hooray for technology!!

Speaking of Netflix, last night I watched one heck of a documentary, Finding Vivian Maier. Although I knew a tiny bit of the story, having read an article a few years ago, I had no idea that a documentary had been made. Apparently, according to what I read this morning, there is some controversy about who owns the work, but that is for lawyers to sort out. What I can say is if you are interested in street photography you will be interested in Vivan Maier. This photograph seems all the more amazing, given the election season. Seriously, I cannot quit marveling and not just because my Mother made me pass out Barry Goldwater literature in our neighborhood when  I was a kid!

Perhaps it is time for a date night this evening for Mr. and Mrs. Peck?

Back in the saddle, at least for today,