Is it Any Wonder?

April 24, 2018
Going back through the photographs I've taken this April, aside from there being far too many, I counted all of the new flowers/plants I've seen, and even I am astonished that there are 72 new things to date. Incredible, right? My method was to just count the type. In other words, daffodil counts as one and so forth. When you start getting into the various colors, the number is probably closer to 100. Is it any wonder I'm going crazy with happiness? It hardly seems fair that I get to roam around and gawk while B is working, however, he does not quite have the same enthusiasm level when it comes to growing things. Although he is pretty smitten with the new growth on all the trees, as well he should be. 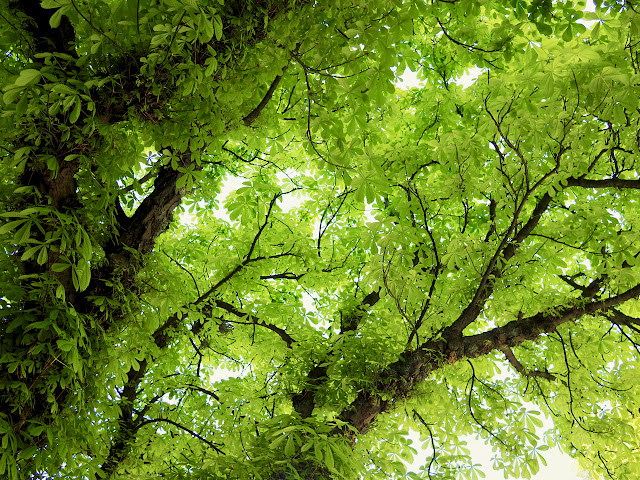 I finished the David Sedaris book, returning it this morning. Beth, bless her heart, alerted me that he will be here in a matter of weeks, playing at the Vogue theater which is but a few blocks away. We would be fools not to go.

The Vancouver police had a very busy weekend what with both a 10K, and Vancouver 420. I've most definitely heard of a 10K, but 420 had me stymied, that is until I heard someone talking about it on the bus. Perhaps I'm preaching to the choir, but if not, here's the scoop: at 4:20PM on April 20, people smoke pot in a big group. Although they are legalizing weed this summer, at the moment it is illegal, however, that did not stop anyone. I was walking down Beach on Friday afternoon after a wonderful time at SP, when I began coming across the folks, gathering at Sunset Beach. 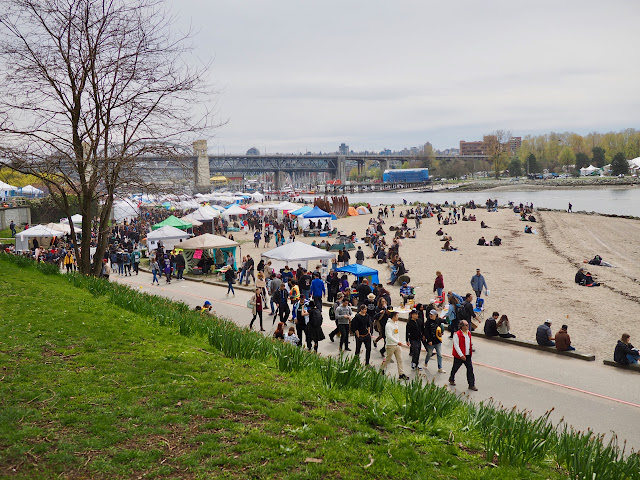 It must have been around 1:30 in the afternoon and although a crowd was gathering, 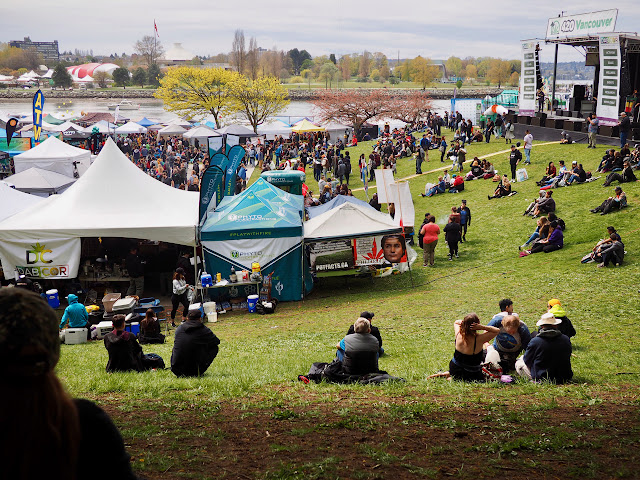 apparently, by light up time there were 35,000 people who left their mark when it was all said and done. It always puzzles me how laws are enforced here.

Speaking of the bus, this was my driver one day last week. Unlike other large cities, the bus drivers here have no problem chatting you up should you be in one of the front seats. She, was of that ilk. 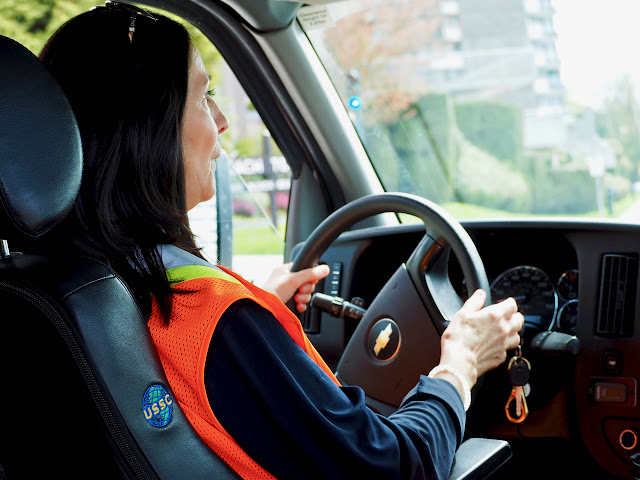 Although I do not share David Sedaris's wit, I do have curiosity in common with him. Learning that driving a bus was a stressful job, I asked for examples. One she shared is the day she had to turn a woman away because she wanted to carry a gas can on the bus. Plus people get angry when the bus is full. She talked more, but you get my drift. My bus ride takes about six minutes btw.

This I'm just throwing in here because it seems like a good aspiration. 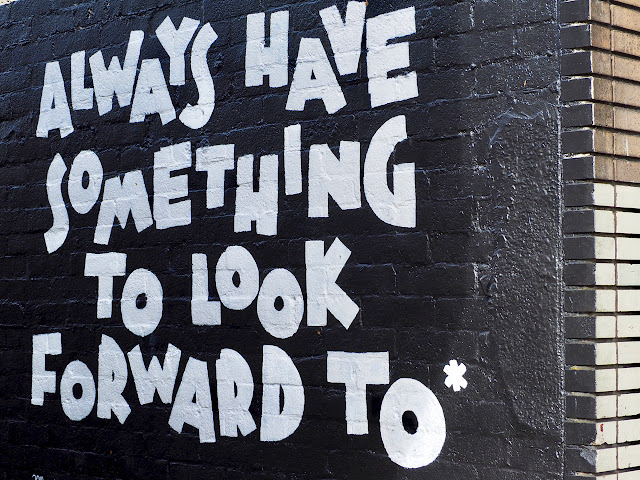 I know we've been on flower overload for weeks now, but I do notice other things, including signs that amuse me. I've seen a heck of a lot of hair salon names in my lifetime, but never this one. 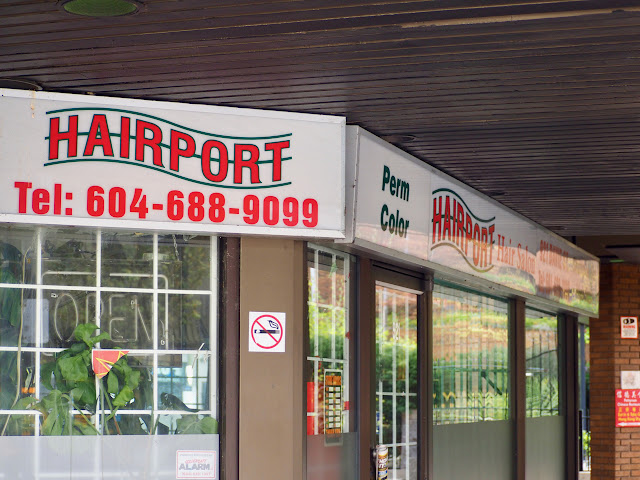 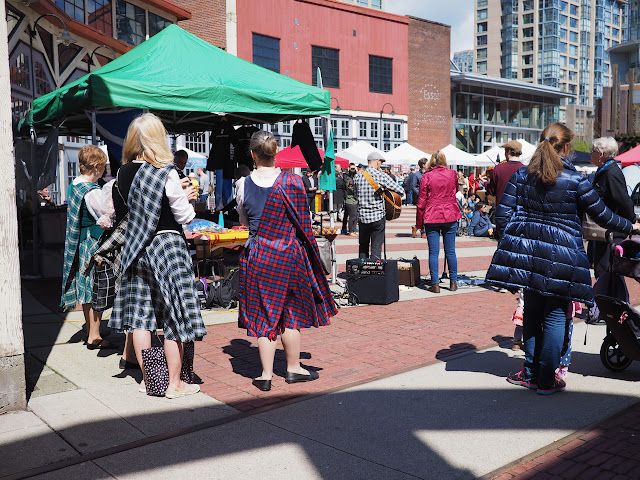 this fantastic car from the "mostly British" car club in Langley, 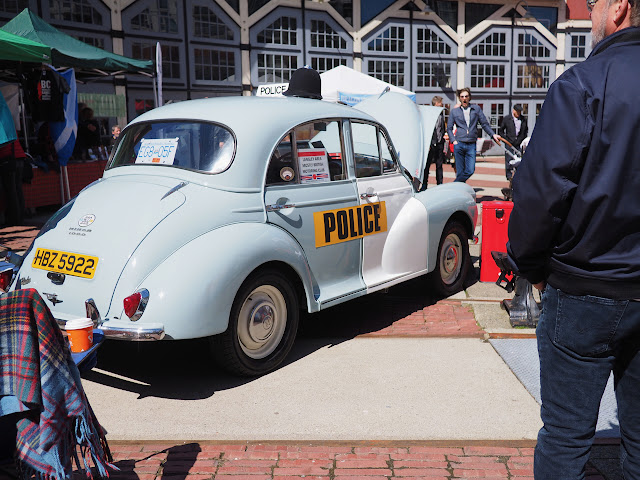 and a little market where these mugs caught my attention. 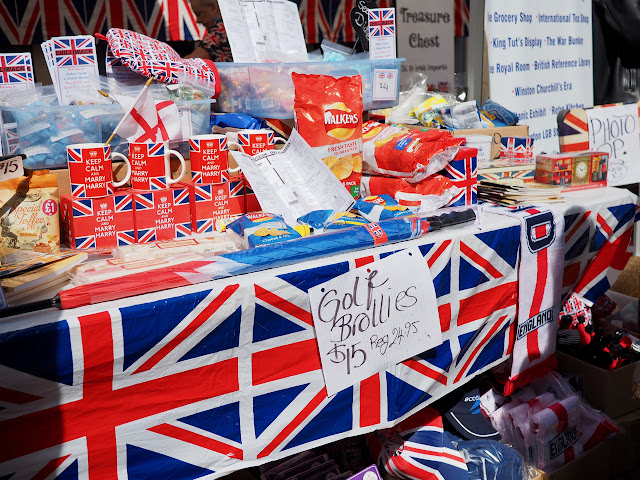 There is a roundhouse, which I'm still not entirely sure what that means, something about how a train gets turned around. A nice man began his chat, saying he would give us a brief history, however, his idea of brief and ours may not have been the same. Nevertheless, we love learning stuff so no worries. It is pretty darn cool to see the steam engine that brought the first Trans-Canada train to Vancouver. 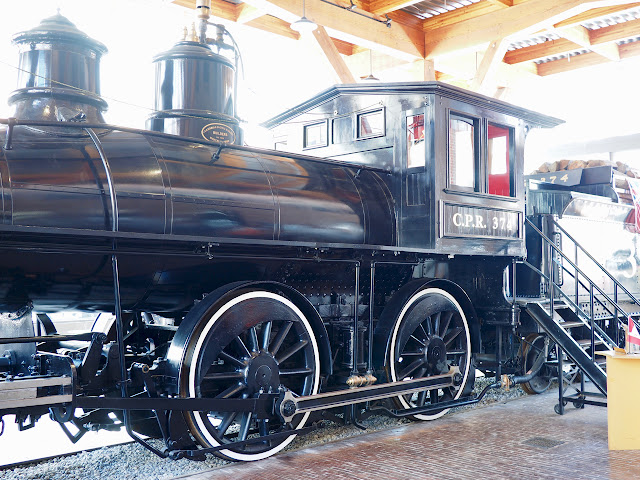 Perhaps you are noticing all the sun streaming through the windows? Well, friends, it was a glorious day to be alive. Because B works, not to mention the weather has not been conducive to just walking, he's not seen nearly as much as I have, so I played tour guide. 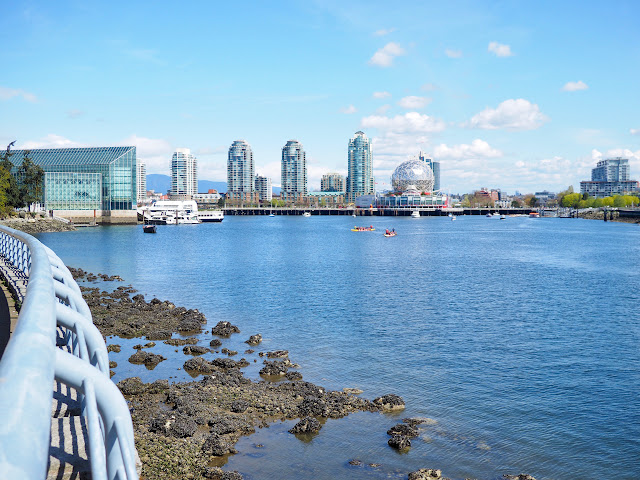 We'd eaten lunch at a waterside restaurant and it was the first time Bruce has worn a short sleeved shirt in probably six months. Not for too long though as it was still chilly, but the sun felt so good nevertheless. While at the Roundhouse, we learned that the roof on BC place had to be replaced following the huge windstorm that felled so many trees in SP. 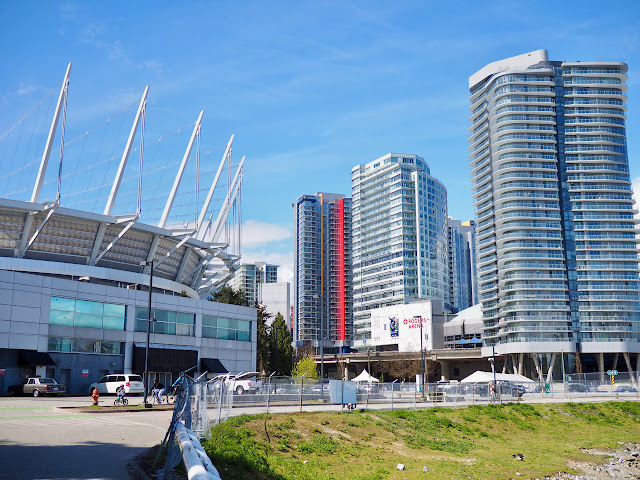 While I look at nature, Bruce looks at buildings. Well, duh, that's what builders do. Walking home through town, this new batch of cherry trees are killer. (more to come another day) 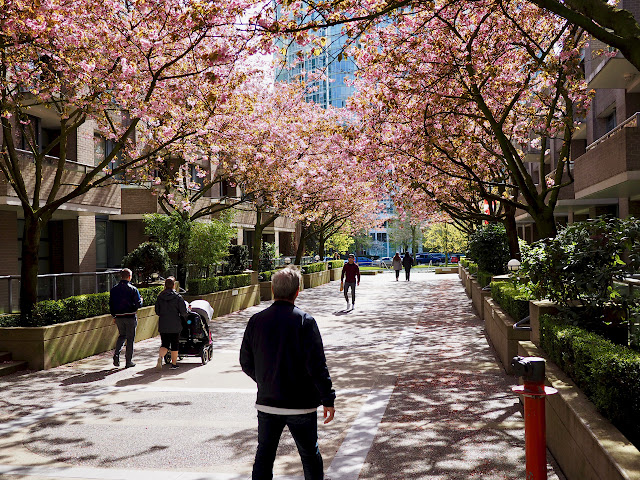 As are the tulips at the park. You know it is a wonderful day when you see the mountains at the end of Richards Street. 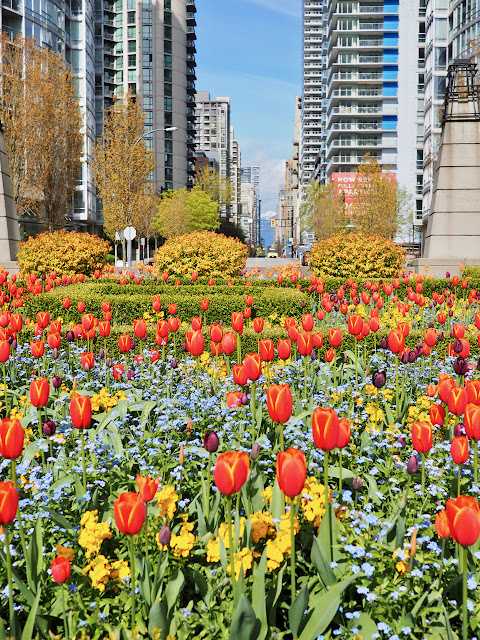 Later on Greg and Zarita picked us up for dinner at Gotham Steakhouse. Delicious, expensive, but what a treat. I've rarely had steak here because it cost more than I'm willing to pay, even at the grocery store. 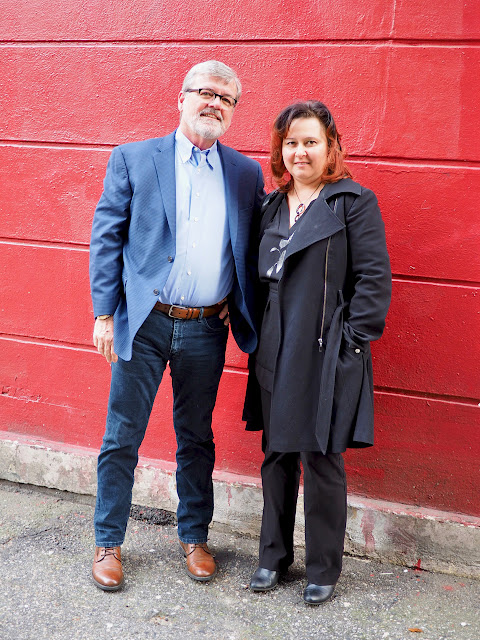 The good news is that because we did not walk there, I actually wore some low heels, a first since we've been here!

The Vancouver Sun Run is one of the largest in North America, so you can bet I was happy that they ran right near our place, 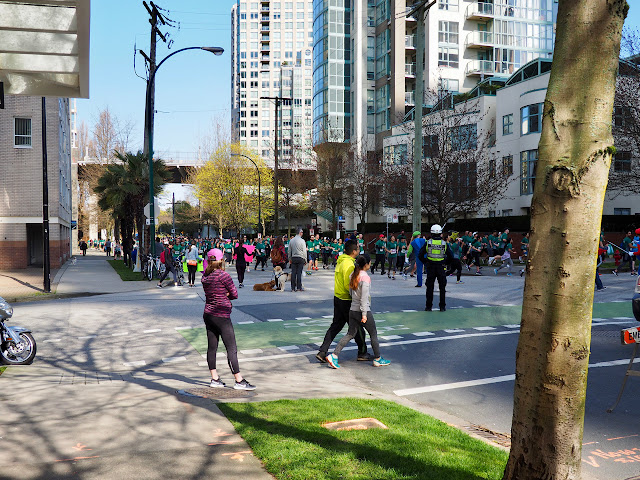 meaning we took a little different route to church, heading up the steep hill on Hornby which I generally avoid. It was very festive as you would expect. 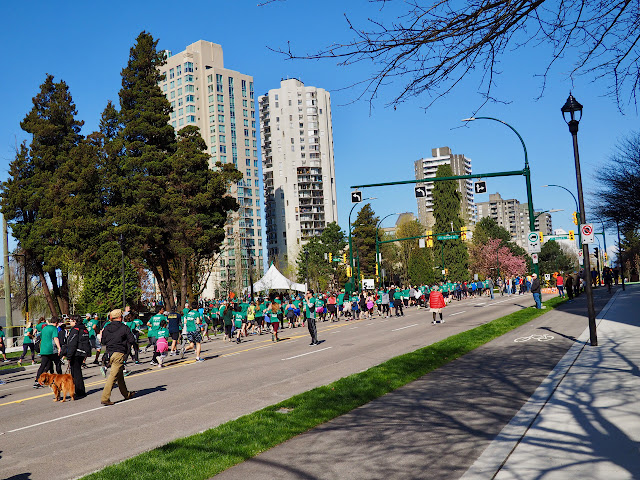 Organizers, no doubt, were delighted with the perfect weather after our 16 days of rain this month. Had we not been on our way to church, I'd have liked to get a better shot of all the runners heading onto the Burrard bridge, but you get what you can. 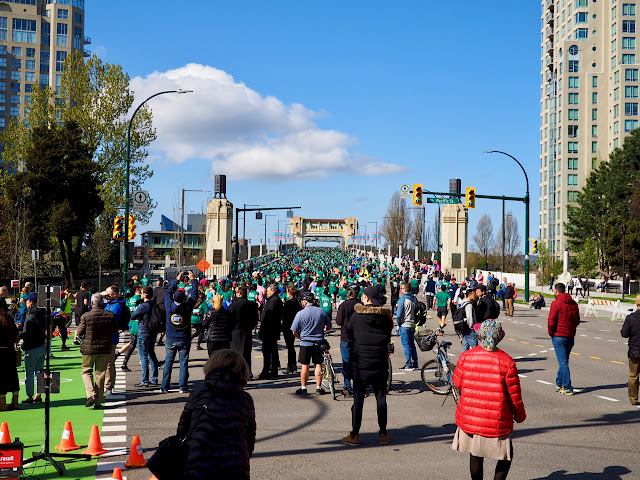 Following church, we walked a bit in the West End, admiring the trees that are both budding, 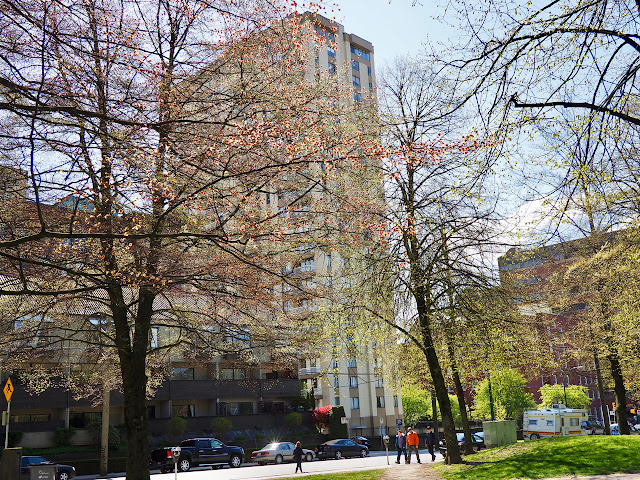 and those that are fully formed once again. 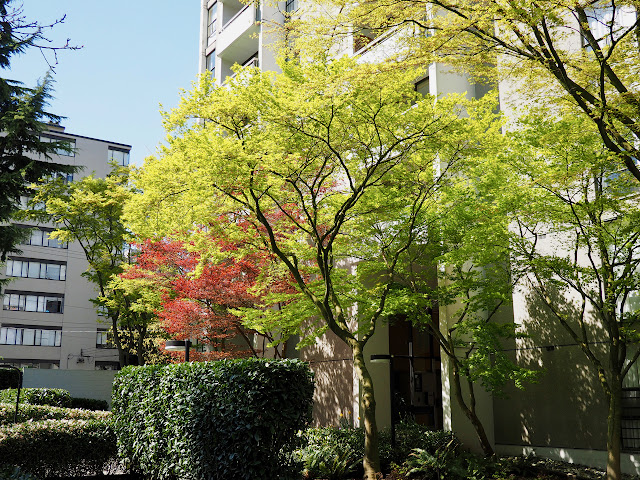 The day I visited the Roede house was a grim one, so seeing it in the spring made me happy that I got to show it to Bruce when the weather was perfect. 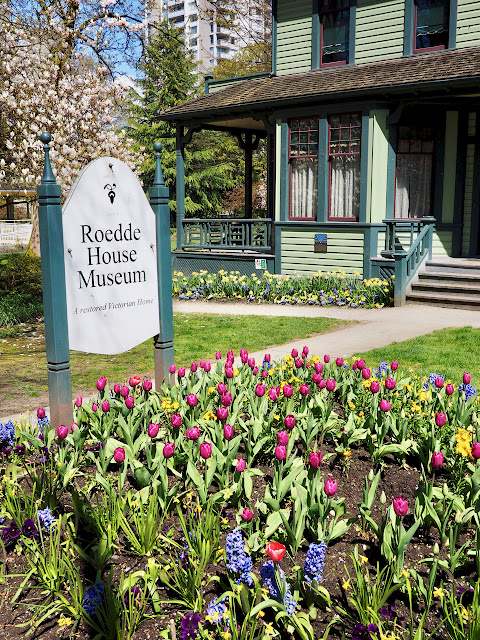 As is our custom, after lunch we walked towards Robson Square. Over the years, Bruce has become accustomed to me stopping every few feet when I see something that interests me, such as these undergarments. 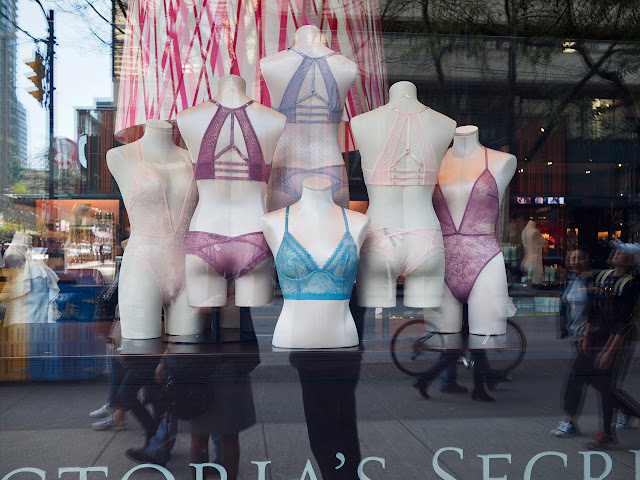 What now Gail? You decide. 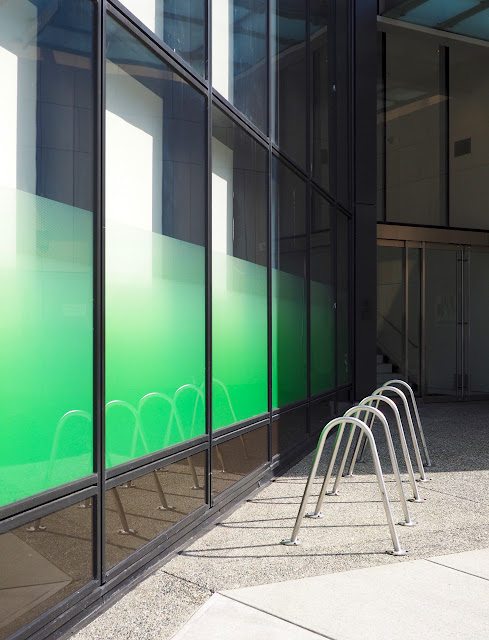 Amazingly, there were no protests, however there was a girl singing with a very lovely voice. 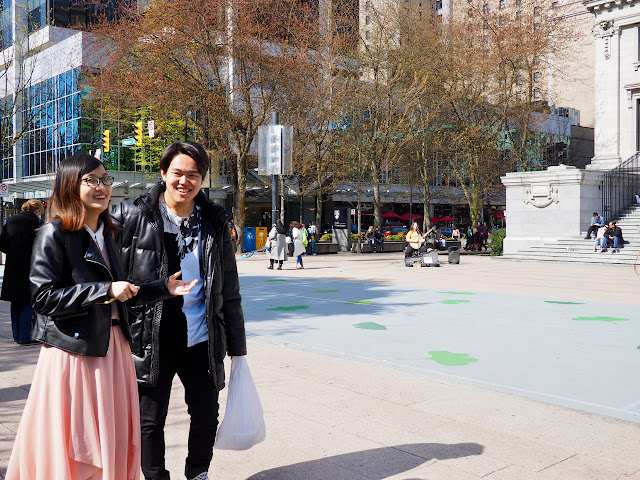 As I've told you before, when Vancouver is pretty, you just can't beat it. 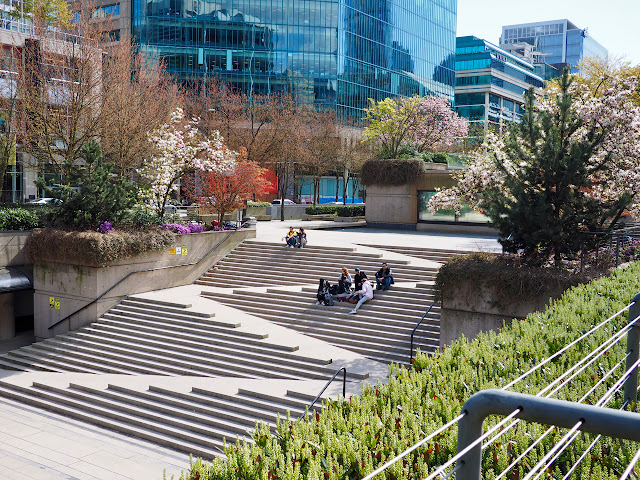