Online or On Paper?

March 03, 2010
Recently when I told someone that I wrote a blog she asked, "what will happen to it?" At first I didn't understand the question, however, soon enough I realized she was wondering how I would preserve my online diary. Responding that I suppose I could print it out, which in truth seems rather daunting now that I think about it; the answer is I really don't know.

I hadn't thought too much more about that conversation until yesterday while I was reading Oscar Loveland's diary to Sylvie during our time together at the museum. Have I mentioned what a Godsend it is having her there? If not, I've been remiss. She is such an interesting woman, and we get along famously, which according to Karen (the curator) is not the case with all of her receptionists and docents. But I digress....
Sylvie was just as fascinated with the comings and goings of Oscar as I am, or at least she pretended to be. Seriously, as I read the day's entries aloud, she kept butting in, asking who is so and so. Naturally, I can't answer her because really what we are reading is a mystery story in the pages of a simple diary. Who are Pa and Ma? What exactly is the law suit all about, and who are all those people he personally subpoenaed? Why won't Maryanne settle things? Who is the baby, who by March weighs 14 1/2 pounds? How does one store 100 lbs. of flour purchased for $3.50? That's one thing I'm learning--the price of goods and services. He paid Samuel Cox $10 for a month's work, letting him go after the month was over. I'm also learning the rhythms of farm life; we are now into maple syrup season.

Here's what I'm thinking...because I'm learning about Oscar, I thought you might like to as well, so I'm going to post his entry for each day that I blog. For now the writing is not only in pencil on thin paper (changes to ink later in the year), but cramped as well, making it hard to read without extraordinary light. I'll call it Oscar's Corner, so here goes in his exact style:

I went over and got lens colt pa bought it and then went to Adams and got her shod for work I came back and went over home to carry over a letter to len I got two collars $2.50

Reading a diary that is 128 years old is good stuff as you'll soon see. So, I wonder if anyone could possibly be interested in my musings in the year 2138? Probably not.

Now let's get back to the present...

On Monday there was a rare occurrence, or at least of late, of lovely weather. I felt the need to take advantage of the free day at Leu Gardens, forgetting that these days it is a packed house, mostly moms and strollers. They gather in large groups, chatting with each other, while mostly ignoring their little ones except to chide them. This album is not so great I'm afraid, partly because I may have lost my mojo for now, and partly due to the effects of this miserable winter. I've captioned them if you care to look at it large. I did want to direct your attention to one sweet mom and her little boy, interacting with each other, unlike most of the mom groups! I've already ranted to Matt about this, so you've been spared this time.

After eating lunch, I tackled the pool which, as you can see, still has more leaves in it than on some trees, despite having already cleaned them all off the surface before taking this photograph. My gentle readers surely recall how our little dog, although mostly perfect, is not so much while I'm cleaning the pool, racing around the pool, barking like a mad man. 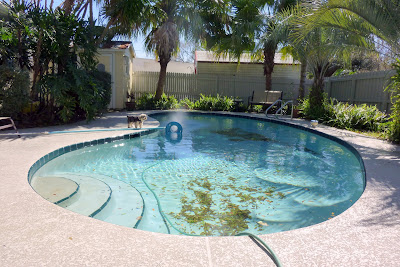 After filling half of a giant garbage can with leaves, I was returning for another go- round with Baxter at my heels. The next thing you know, he's tumbled into the deep end of the pool. Thankfully, I was able to rescue him by grabbing the harness he always wears. I'm here to tell you the water temperature is brutally cold! Here he is trying to dry off. 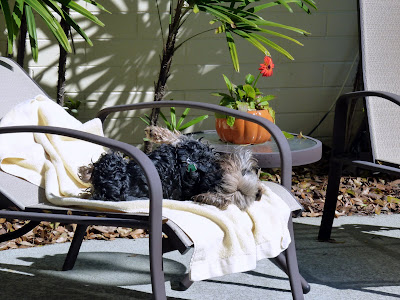 Fortunately, the sun was shining brightly and before long he warmed right up. You would think that he'd learn his lesson, however, I'm thinking he won't. According to Lisa, the wind speed was 32mph yesterday causing leaves to rain down; he'll have his chance to show what he's learned when the sun decides to make another appearance.

Poor Mr. Bruce! I'm sure I would go mad having to put up with traveling like he does. He always says it's the easiest part of his job which is sort of sad. I suppose travel issues are ones we can relate to--contractor, budget, weather, operations folks, unrealistic schedules, and other problems too numerous to relate--not so much. Leaving the house around 6 for a 7:30 flight to Atlanta, he called me around 2, relating that he was STILL in Atlanta. Numerous flights were canceled due to bad weather. Instead of arriving around 1, it was more like 6pm. A mostly wasted day on travel. On the other hand, Oscar would surely have been blown away if someone told him you could travel from Orlando to Iowa in less than a day, wouldn't he? Perspective, we must always keep that in mind.

More painting in store for today--
Listening to: The Killers - The World We Live In
via FoxyTunes

Mary said…
I've wondered these things, also. While cleaning the garage we discovered an old suitcase filled with old photos that had belonged to Sam's mother. We all oohed and ahhed over them, wondering aloud together. I asked Rachel if her children will ever stumble across a family treasure of pictures. Since most of her pictures are on discs, she said 'no'. If they stumble onto the discs, they probably won't be able to view them. =[
March 8, 2010 at 9:46 AM