May 05, 2011
836 posts and I've never used this title before? What's that all about? It's not like I never shop, just not like I used to. Formerly, I was a slave to the grocery store; buying food for six people, day in and day out, will do that to a person. These days, not so much. Before I got all hot and sweaty mowing the lawn yesterday I made the monumental decision to go to Publix. For those of you not from Florida, Publix is an excellent grocery store whose motto is "Where Shopping is a Pleasure." My children who have moved away attest to that vehemently; Chicago being the worst of the food shopping cities they've lived in. Seriously, I think it had been two months since I'd gone through the whole store, aisle by aisle. Thus, it took me forever because I was looking at the myriad of products available.

Oh yes, before I forget, Publix is from Lakeland where I'll be this weekend.

One and a half hours later, and somewhat poorer, I next did the unpleasant task of putting things away. Once upon a time I had a large stand up freezer which made storing food so much easier, however, it was getting so old, not to mention that it wasn't frost-free, that we took it out of use. Speaking of which, Nancy suggested that I'd probably love As Always, Julia and was she ever right! These are more than letters, they are a history of the years when I was born. There are several letters back and forth regarding the "deep freeze" as it was once known. As well, the merits of frozen foods are debated extensively. It has been a while since I've started a book that I just don't want to put down. After the food haul, the lawn mowing, and lunch, I settled in for a bit yesterday afternoon letting the book transport me both back in time and place. Letters, how I miss a real letter these days.

While at the museum on Tuesday a woman came in saying that she'd been told that her candy shop off Park Avenue was the subject of one of the "plein air" paintings last week. Indeed it was. Although she liked it she didn't love it; the $1,100 price tag undoubtedly contributed. Because I had some time to kill before my hair appointment, I stopped in. Very cute place. 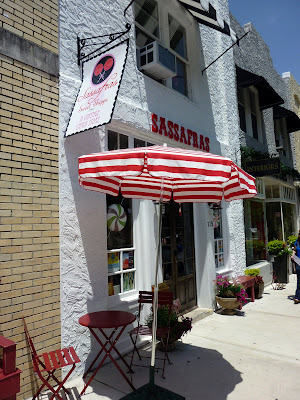 Surprisingly, she said they'd been doing very well. It's funny how people perceive things so differently. Talking to Angela later in the day, she thought it was silly that she sold candy like this:

I, on the other hand, thought it was fun. I amused myself seeing all kinds of candy I'd completely forgotten about. And then there was this: 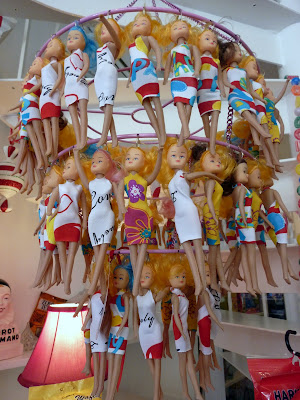 One of the absolute craziest chandeliers I've ever seen. What a conversation piece this would make in your home!

As is always the case, I've got more to say but it's time to make myself presentable for our bridge group. They are always wanting me to wear something homemade and today I will not disappoint them.