July 29, 2015
We've been getting a lot of rain of late, and with that comes explosive growth in the garden. These little salvias are finally coming to life! Our niece Laura, a purple lover, will appreciate these. 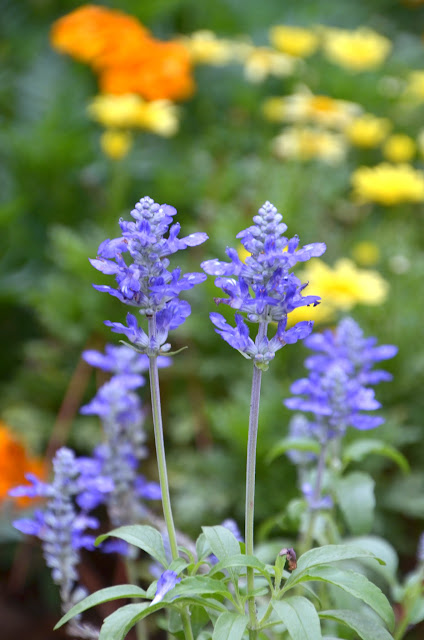 Aren't they sweet? The marigolds and little yellow daisy plants aren't looking too shabby either. One flower that Floridians like to plant is the periwinkle, or vinca, because it stands up to our oppressive summer heat and humidity. Except, once you plant them, in what can be a good thing, or a bad thing, depending on how much you like them, they will seed everywhere in your garden. And I mean everywhere! I can't even remember ever having them in the back yard, but a few months ago a plant sprouted up by the air compressor, and pool pump, and it is getting larger every day. In fact, I had to lop off a bunch as it was impeding the walkway! It does, however, add a little bit of prettiness to an otherwise dreary part of the yard. Planters beware! (humidity fogged camera lens) 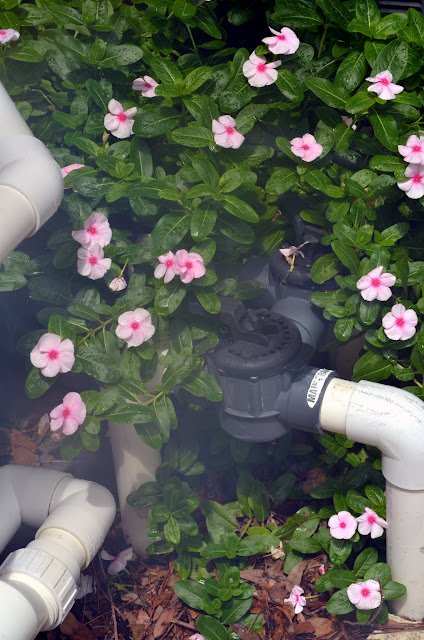 Amazingly enough, and it could very well be because Bruce put all the sides up on the tent, which he considers a good luck charm, we had no rain on Sunday. Saturday--mega. Monday--all day, and Tuesday--most of the day. Go figure. Anyway, as I was typing about freshening my booth up, unbeknownst to me, Mr. Bruce was doing just that while hanging the canvases. Forever and ever, things have been lined up like soldiers on the walls, so imagine my surprise when I arrived and one wall looked like this. 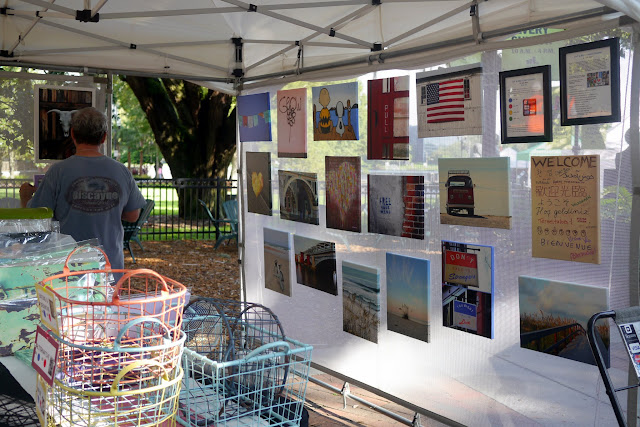 I count myself very lucky indeed to have experienced another good day of sales. Plus, the visitors never stopped which makes the day fly by. Woo hoo!!

Last Friday, Sherry invited us over for dinner. We went and met some new folks, including Fred and Rene who were exuberant to the MAX. 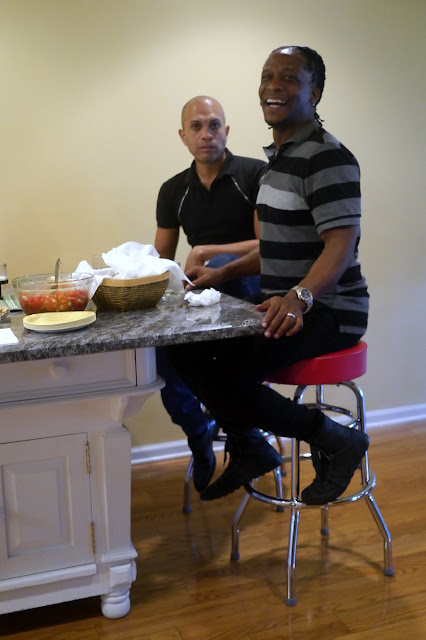 Well, Rene doesn't looks so exuberant now does he? Perhaps I caught him at an importune time. Earlier in the day I'd gone over to help her with some preparations, and much to my surprise, as I was passing through her garage, I discovered she has the same shoes as I! Seriously? Years ago, when first I began taking photographs in earnest, I would venture anywhere, including forests and lakefronts, necessitating some sort of closed-toe shoes. Except I am not the athletic shoe type. I looked high and lo before finding these Clark shoes that served me well for years. 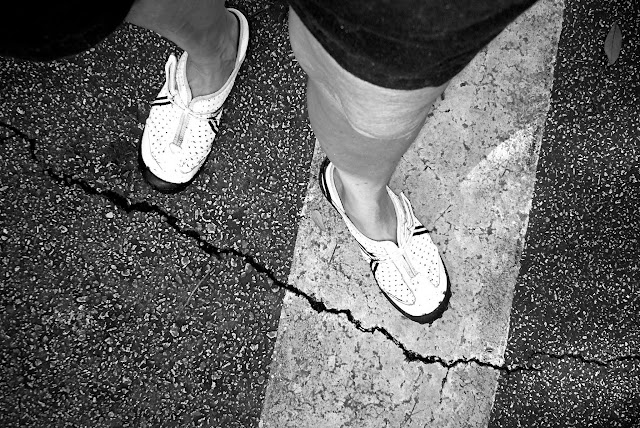 I loved, loved, loved, those shoes. Then they died. I was in mourning until one day, at the market, a woman walked into my booth wearing, what appeared to be, a new pair. Giddy, I asked her where she got them. Easy--the outlet mall. I made a beeline the next day, and wore that pair for years before recently relegating them to be my lawn mowing shoes. What are the chances that Sherry would have the same exact pair? Probably pretty small, don't you think?

Enough already Gail...what does all this have to do with the title? Nothing really.

So, for years and years, I've thought about painting the fireplace. Yup, big, big move. However, something clicked yesterday. Well, maybe that something was that Bruce was home and could remove the mantle, which is heavy indeed. He agreed, and I was off and running. I wish I'd taken a photo when it was decorated. Alas, in my rush to get going, I did not. 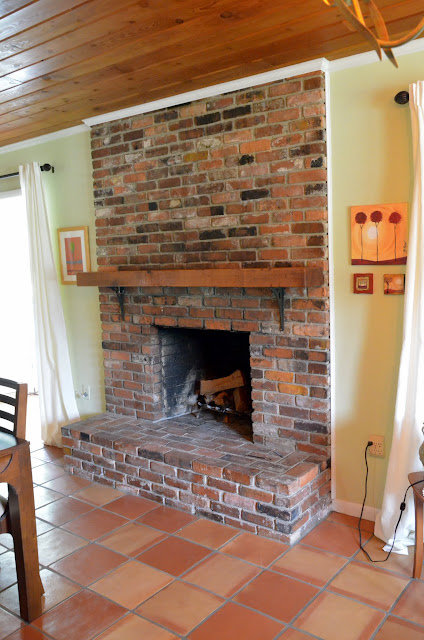 There you see 55 year old brick. While I know some people consider it sacrilege to paint brink, I am not one of those folks, thinking anything is fair game. Most of you know that for years I've done everything in my power to brighten up the room, with the fireplace the last man standing. No longer my friends...the primer went on. 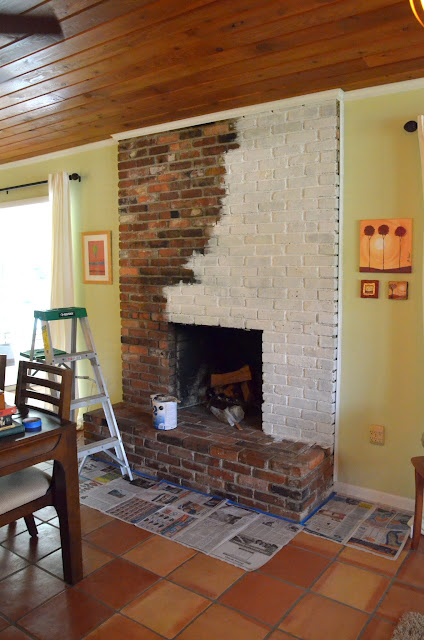 And not very easily, I might add. Using a three inch brush I just kept going and going and well, by golly, it was done. 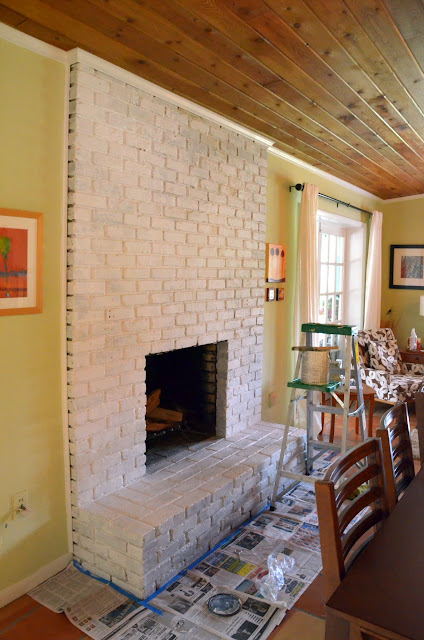 Because it took so long to prime, by the time I'd finished the bottom, the brick up top was all dried and ready for paint. I'd been vacillating on the color, finally deciding to use the kitchen cabinet color which is a warm white. Plus, I wanted to get done before B went out of town this morning so he could put the mantle back. A word on the mantle--he made it when we first moved in; apparently there was no mantle? Can't really remember as it was 20 years ago this October. Anyway, he has given me permission to paint it if I feel the need, but for now we're sticking with it as is. Same for the brackets which we found in an antique store.

The trouble with painting brick is that it is darn hard to get into all the cracks. I used both the three inch, and a one inch brush, to do so. By 5:00 my hand was super tired, and I decided to call it a day, but not before everything was restored. 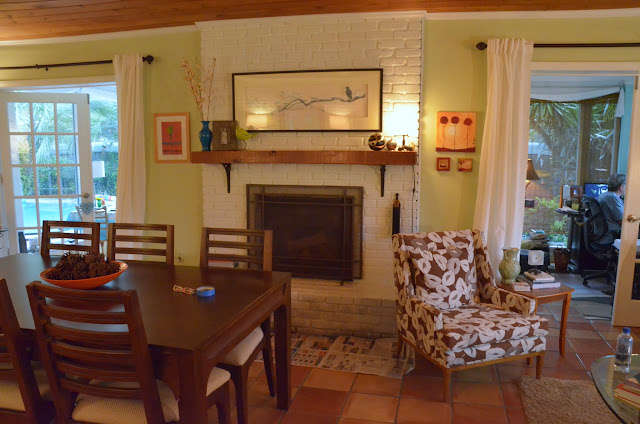 You can see that I've yet to finish the bottom which is the first order of business when I finish writing. I wish the lighting were better in the photo, and I sure wish it had been better while I was painting! Taking the shades off some of the lamps, having all six of them on, as well as the chandelier, helped dispel some of the day's gloominess. Looks like today will be a repeat, which you well know, does not make me a happy girl.

But, at least I have a bright fireplace, for which I'm most thankful! B was ambivalent about my project, however, this morning before leaving he said, "honey, you were right, the fireplace was tired, and now it is not." Could not agree more!

Indeed, it was time,