August 24, 2015
If you've only got time to read, or in this case watch, a tiny bit of my blog post today, I'm pretty sure you should spend your time on this video entitled, How to Age Gracefully. (Click on link!!) My son Matt will particularly appreciate the wisdom of a 92 year old man--" indulge your sweet tooth, you're going to need dentures soon enough anyway."

Caring for Matt took up most of Angela's time these last six or seven months, so she'd yet to see the house painted, however, now she has, and has given her seal of approval. At least for this week anyway. There is nothing Angela likes more than redecorating, and she is planning on indulging it big time--her way of dealing with the loss of Matt. Fortunately for her, he left her with plenty to accomplish whatever her heart desires. Visiting for a few hours last week, she described her plans, one of which is to redo her bedroom. Wanting to add to the Gaillery, looking at my prints was on her to-do list. Originally she picked this old one, which I quite like. 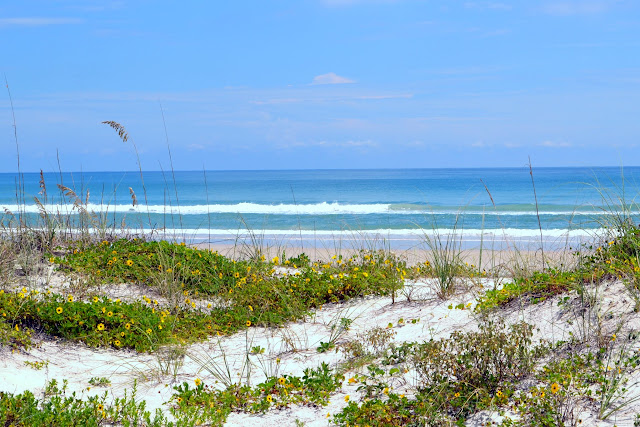 Now, however, she's changed her mind. Let's just say she is a good friend, but a difficult customer!

Someone who is not in the least difficult is Mary, whose birthday we celebrated at Panulo's on Park Avenue. Three of her lively daughters, along with a few friends, had a lovely lunch together. 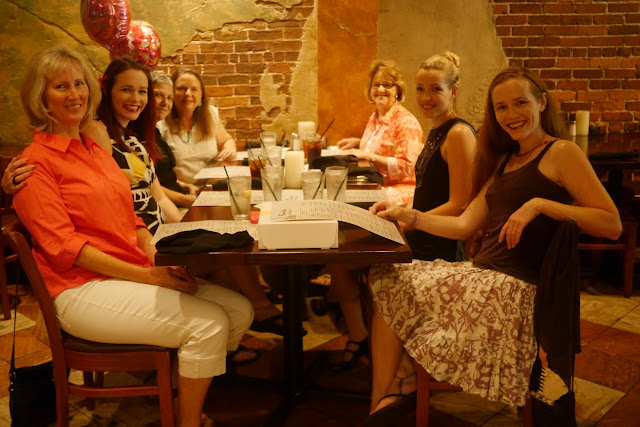 In other words, all the young ladies at the table are Mary's daughters, and here is Mary herself. 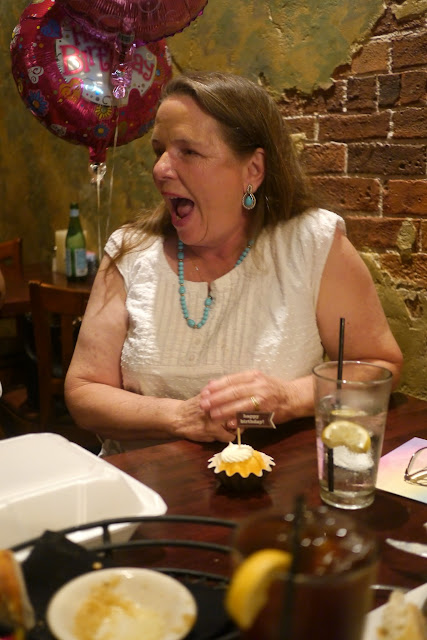 I hope she won't mind this photo--candid are so much more fun than posed shots. At least I think they are!

The trip to Renningers last weekend yielded a couple of finds, these colorful canisters were more than I could pass up. I've yet to fill the larger one, but the little one is filled with kosher salt; the box of salt was a real pain to measure from. 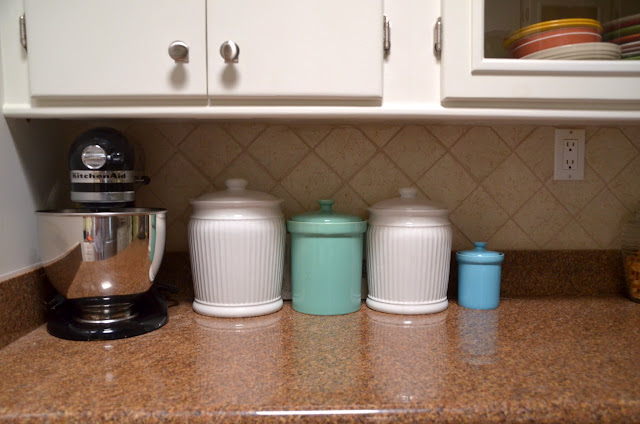 While we were inside paying, or rather as we were leaving the shop, almost simultaneously, both Bruce and I noticed a painting displayed on an easel near the door. Looking at each other, we agreed it could look neat in our kitchen dining area. Shoe polish worked wonders on the weary frame. 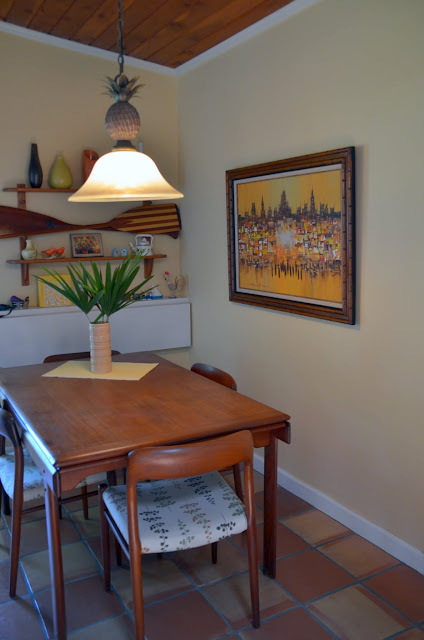 Kind of funky, kind of cool. Speaking of cool, it has been anything but. The humidity!! Although I know it will happen, I can't seem to wait--camera fog every single time. 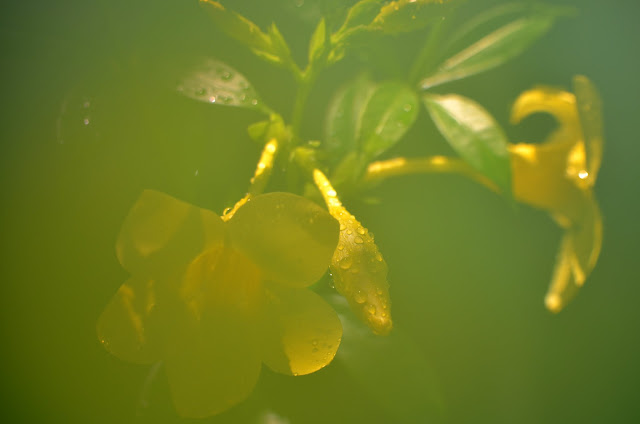 So Baxter got a haircut. Nothing new there. Nothing new either about how he loves to rub his body on the sofa following a hair cut. Eventually he stopped, sitting adjacent to the pillows, one of which is the surprise pillow cover from my sister Lisa. I bet you can spot it right off! 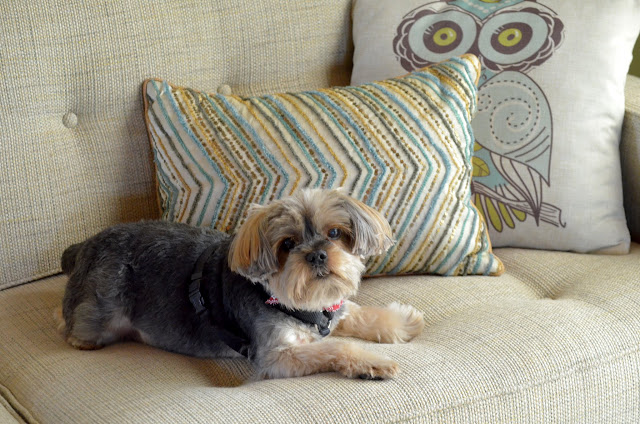 There's also nothing new about rain this time of the year, but Thursday evenings rain was pretty darn intense, so much so that it bent the gutter! 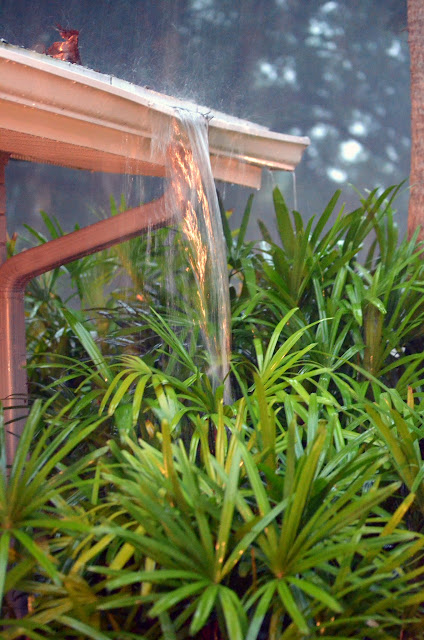 Poor Mr. Bruce, sitting on the tarmac at the airport, following his harrowing journey home via St. Pete, because of the severe weather. He was meant to arrive home at 5:30; instead it was nearly 9:00!
He still insists that traveling is the easiest part of his job. :)

Miraculously it did not rain on Friday night when we went for a little anniversary dinner at Le Coq au Vin up the street. The meal was delicious in every way, including my little hot tea service at the end. 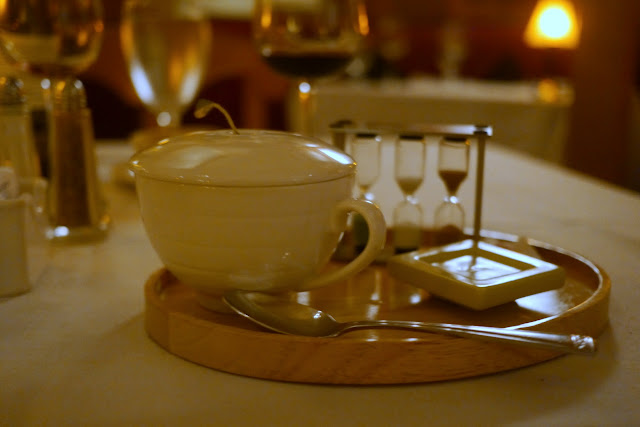 Saturday we worked like crazy together in the yard before the inevitable rain began, this time around two in the afternoon. Looking ahead to the weather for the Sunday market, I was delighted to see the sky turn fairly red at sunset. Rushing down to the lake, I missed the seriously red part, but did find these guys fishing. 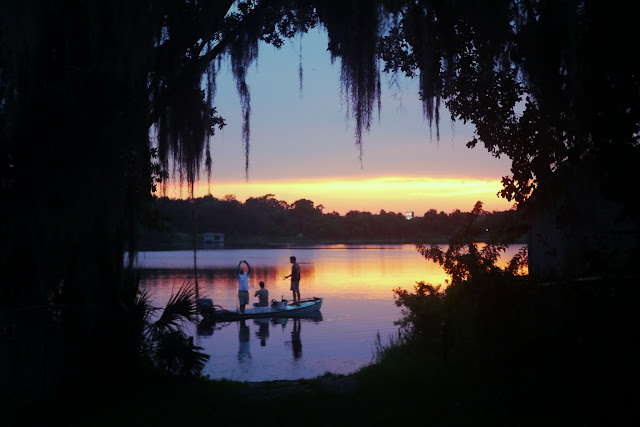 It seemed like a good sign until I awoke on Sunday morning to a nearly red sky! What's a vendor to do? We went, we sold, we stayed dry! Yup, not a drop of rain for about 30 hours, amazing!! The sky threatens as I type...

One of the things I love to photograph while riding around the neighborhoods on my bike are the "street cats" of which there seem to be plenty. More often than not, they sit tight while I do my thing, as did the one below, at least until I moved my bike a little. 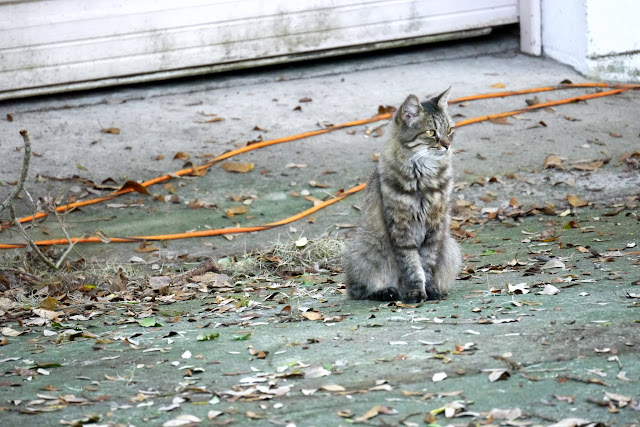 When she walked away I discovered she had no tail! 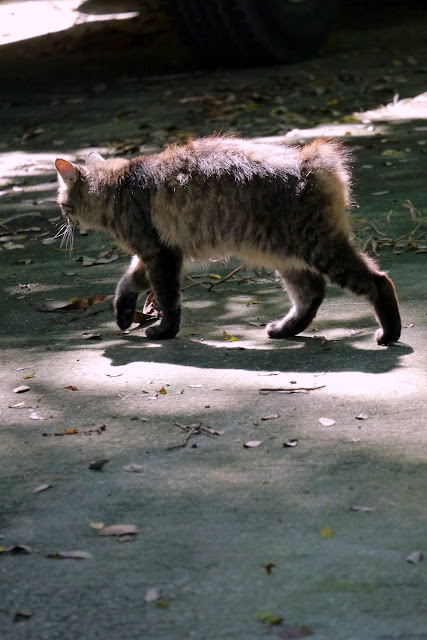 I believe this is my sign to exit as well; I want you to have enough time to watch that video!!