Making the Most of a Rainy Day

August 04, 2015
When last we met I was hoping for a dry day at the market. My hopes were dashed around 1:00 when suddenly it began raining, and do I mean raining. A mad rush ensued. Fortunately for us, about a year ago, we found some plastic tubs that we could fit the prints in, however, I store them outside the back of the tent. Rushing around to get everything inside the tent, I dropped the sides down which Mr. Bruce had fortuitously attached in the morning. All of the canvases and prints came home dry. The tent and sides however, spent the next 6 hours in the garage with a fan blowing at max speed to dry them out. It was a big rain my friends. 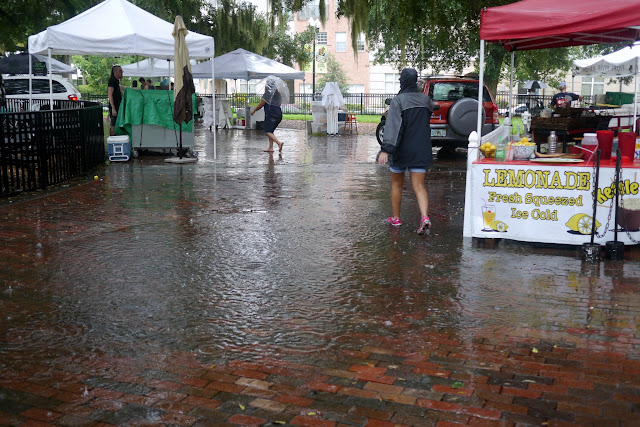 Yup, that is all water in front of my tent. Before I knew it, the water was seeping into my tent and wetting the bottom of the tablecloth. At the last minute I remembered the cardboard boxes under the table--in the nick of time I retrieved them before the flood waters came any further.

All was not lost, however, because before the arrival of the monsoon, I had some visitors. This is Matt Stromberg's Mom who came to say goodbye before returning to Seattle. 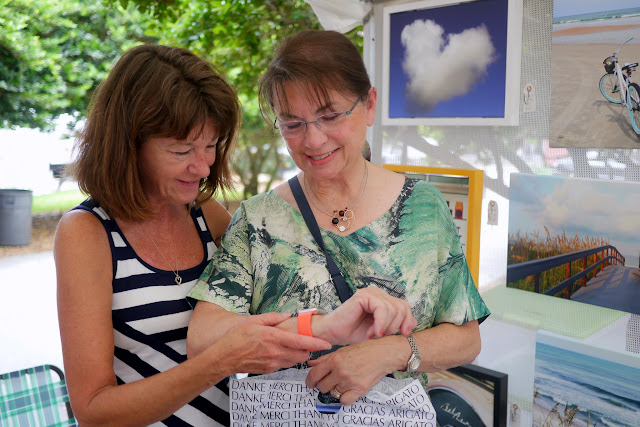 I'm admiring her stylish Apple watch. Now I know where Matt got his love of all things technology!

Prior to her visit, a woman stopped to look at the walls, complimenting what she saw which was sweet. Well, it got sweeter yet because she told me in her town there was a fantastic image that she just knew I would want to photograph. She even gave me the address. After drying off from the rain mess, I saw I had a message from her on fb. Actually I did not even know her name, but she knew mine. A series of messages went back and forth about the location, and after seeing her version of the image, I just knew I had to go there and take one for myself.

Now, generally, I am not one to be all excited about driving in the rain, but in this instance, I felt sure it would add to the photograph, so around 8, Monday morning, with travel hot tea in hand, along with a bowl of bing cherries, I set off. Did I mention it was raining? 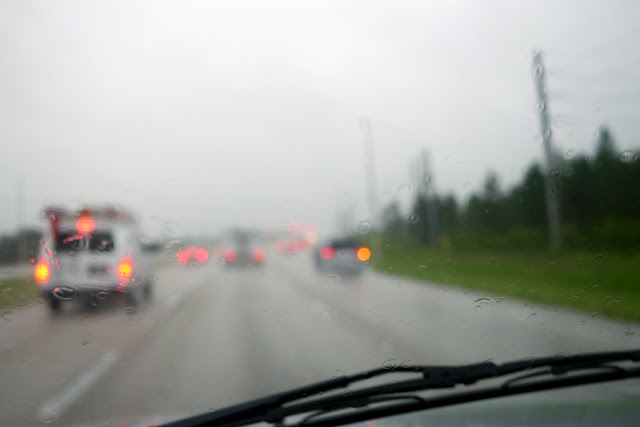 Big time rain most all of the way. And, in fact, it was still raining when I arrived. Like a lot. Not great for a camera, so I took the original photo through the rain smeared side window. It was then that I remembered that I have a Boy Scout for a husband; the seat pocket behind my seat was stuffed with a rain poncho! That man took the Boy Scout motto--"be prepared" to heart. Doing my best to get into said poncho while keeping the camera dry, I placed our little friend, Tommy Toot, on the open windowsill. 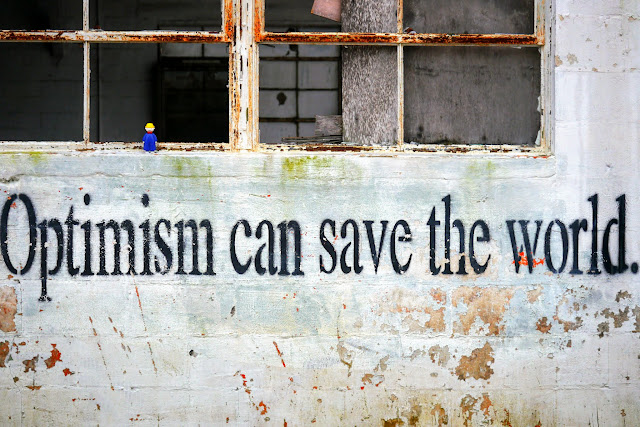 Isn't he cute? Letting Maria know I was in town, we agreed to meet at the nearby breakfast place where my intention was to both feed her, and thank her for the tip. 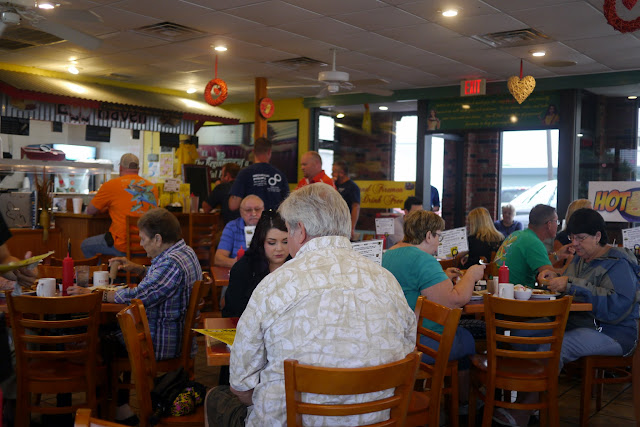 Except her diet did not allow her to eat their offerings. While I ate my breakfast, we learned a little about each other. 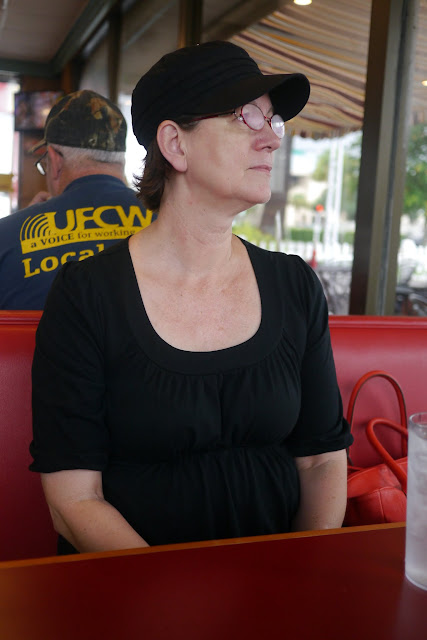 The gist of it is this: after moving to the town, her life was slightly adrift, and she was making every effort to get things back together again. She spotted the above on her very first walk around town, coming back to it, time and time again, for inspiration. Happily, her optimism paid off, and her life is much improved. Amazingly, they came to the market on a date, and the rest is history, or so I imagine. There is little doubt in my mind that Maria is not the only one who will find the image powerful.

Well, there's more. Following breakfast she insisted we go to a nearby art studio where some women she knows were making art. All three of them were just delightful, and it was a real treat to meet them and observe their work. On our way, Maria pointed out yet another from the same person who stenciled the first image. Did I mention it was still raining? Taken through my window.... 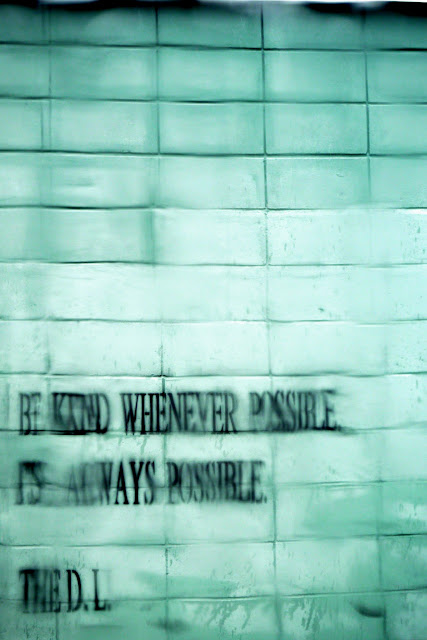 Seriously, it was all too good to be true! One part of me feels weird that I did not come across them on my own like every other piece of street art I have. The other part reminds me that I am always thrilled when someone is inspired by a piece of street art, or in this case, words on the street that they will more than likely never come across on their own. I think the second part wins.

Talk about a generous soul. The thought of quitting the market is never far from my mind, but it is this sort of thing that keeps me going and going and going....

I drove around the little downtown before leaving, and I swear, every small town I go to in Florida has a version of this sign! 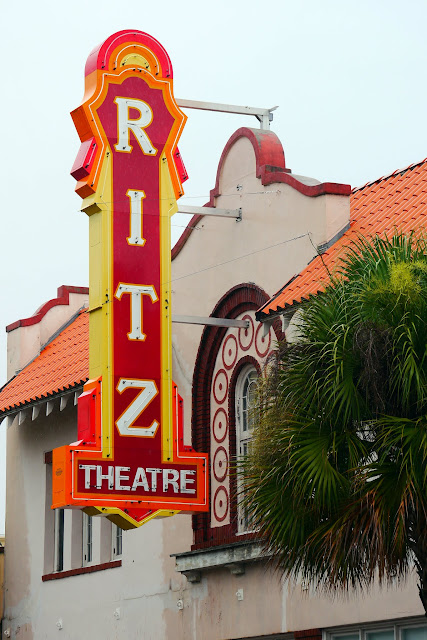 Driving home, the rain finally stopped. Whew! Driving in Florida rain can be quite treacherous as anyone reading this who has done so can tell you. Then too, this allowed me a little sight seeing. Don't ask me why, as there is no sign, but I turned off Highway 17, in the town of Lake Alfred, and came across the Mackay Gardens and Lake Preserve. The article linked, in case you are interested, gives a bit of the history, but essentially Mr. Mackay, a Scotsman, was the founder of the citrus industry in Polk County, building this house in 1917. 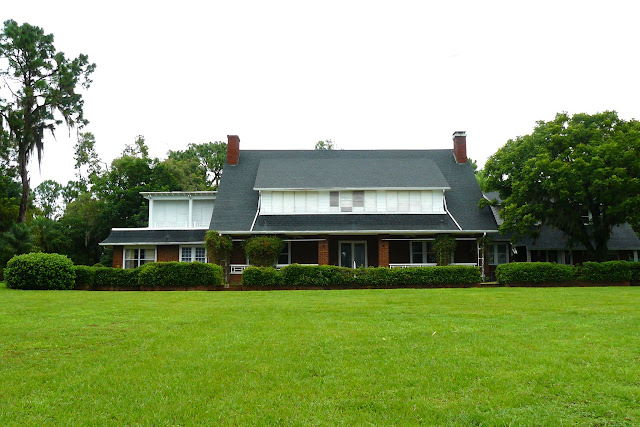 The house faces this lovely view... 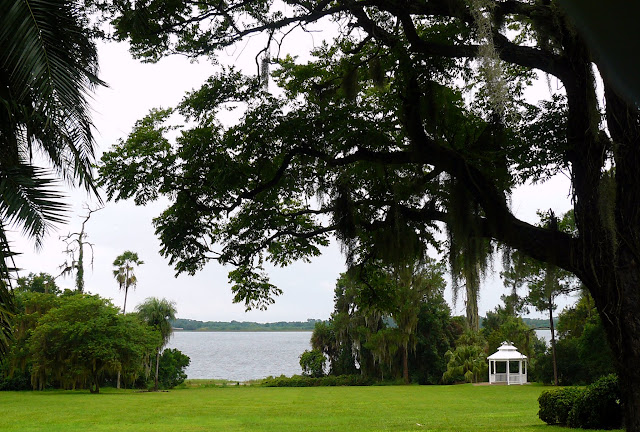 According to this article from Wikipedia, the town of Lake Alfred has a total area of 8.6 square miles, 3.7 of which are water! The other fun fact I just learned is that it was founded by snowbirds from Fargo, North Dakota who originally named it the same. Apparently the Post Office would have none of that because of mix-ups with the city of Largo who claimed that name first.

So, on the property there is this structure, of which I cannot fathom it's original function. 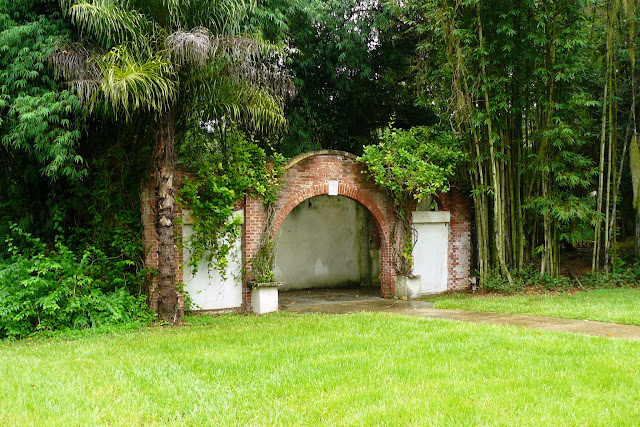 Looks pretty good from the outside doesn't it? Not so much on the inside! 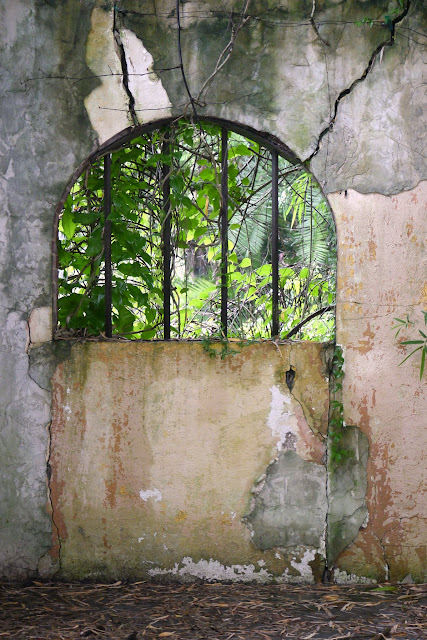 Those are some serious cracks going on!! Back on the highway, this little structure caught my eye on my inward journey, so I stopped long enough to photograph it while outward bound. 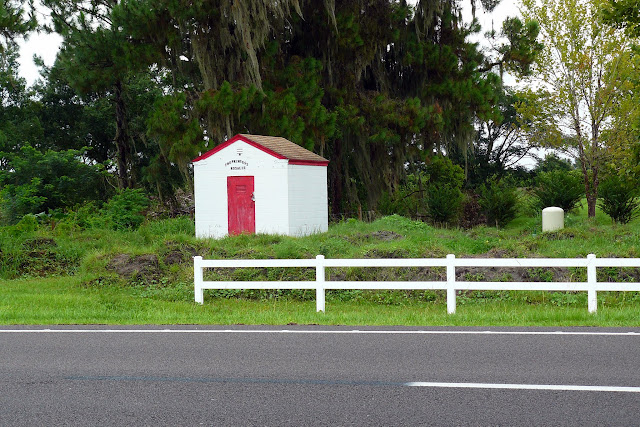 I have no idea what it could possibly be. Here's a closer look: 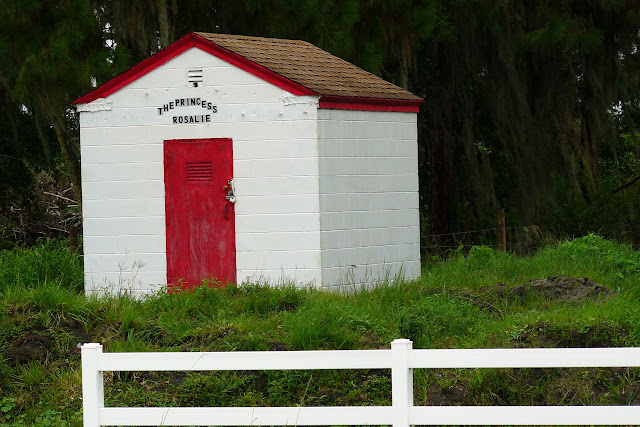 Too bad it did not say, The Princess Angela!

The drive home was much more manageable as I mentioned. This fellow was in front of me for quite some time. Do you think that bike ever gets used? 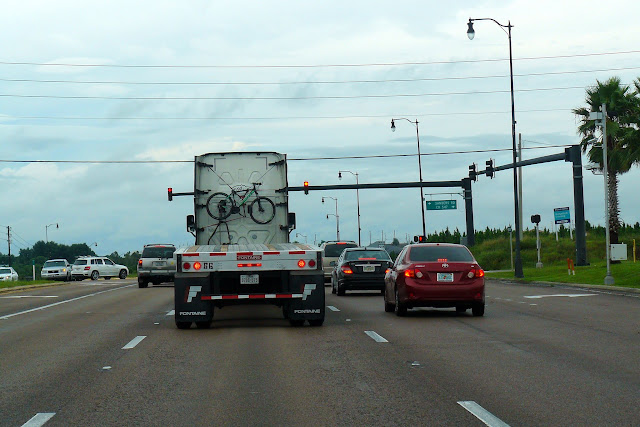 The day continued it's dreary ways, in fact, the last week has been pretty darn dreary, causing many of us despair. Most Floridians just don't function as well when it is dreary. Today the sun finally showed it's face, and I could not be happier. The pool and back yard needed my attention this morning; the rain is causing explosive growth, while cooling off the pool to 82 degrees, about 9 degrees cooler than a couple of weeks ago. You'd think it would be the other way around wouldn't you?

The glass is always half full, (except after a dreary week!)