Perhaps a good place to start is the pink Tabebuia blooms? 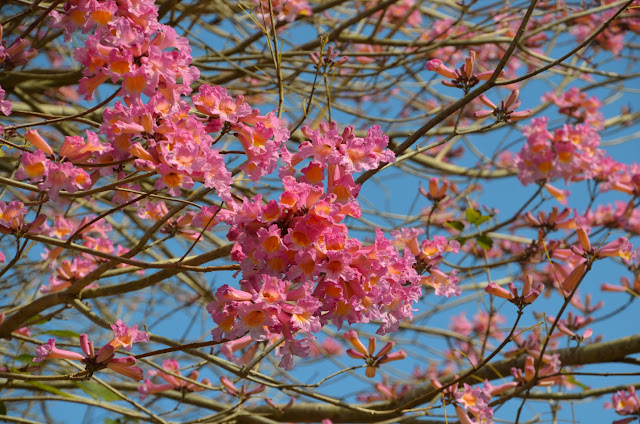 And really, why not because they are so beautiful, and before we know it, they will be gone.? Now it seems as if I've given short shrift to the yellow blooms, which are actually my favorite of the two. I wish this were a photo of my tree but, alas, it is not. Mine is still puny with nothing like the profuse blooming of this tree. 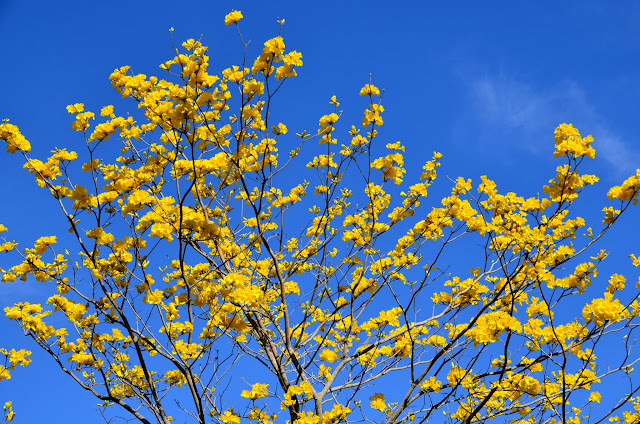 What I love so much about the yellow is how garish it is, as in really, really, intense yellow, unlike any other bloom that I can think of. My sister Carol once taught me that contrast in art is the key, and I believe that holds true for nature as well. What is noticeable about the pink blooms is the yellowish/orange center, whereas the yellow are just plain yellow, through and through.

Trees that are not found often in Orlando are Dogwood trees, but every year I seem to scout out a few to photograph. I like them for their soft nature. 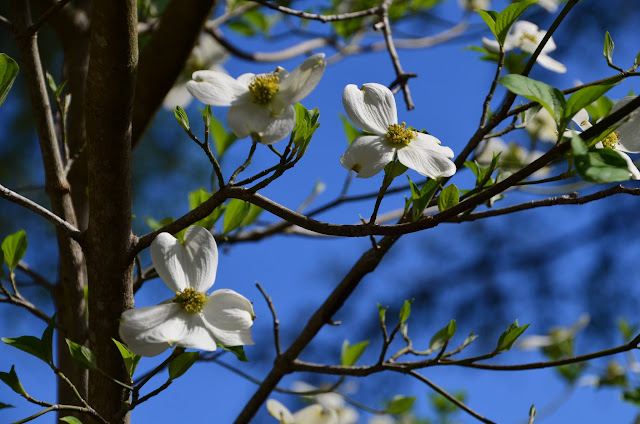 Speaking of flowering trees, Matt and Tom are going to Japan for a vacation soon, and you know what that means...cherry blossoms! Lucky guys.

Sunday, after church, I convinced Bruce to go to a dive bar for lunch, or that is what we assumed it was. You don't suppose I would go there just for the heck of it though, do you? Somewhere I'd read that The Hideaway was pretty good, and we found out that is indeed the case. The hamburgers, priced at $6, were some of the best we've eaten at a restaurant. A very nice surprise. 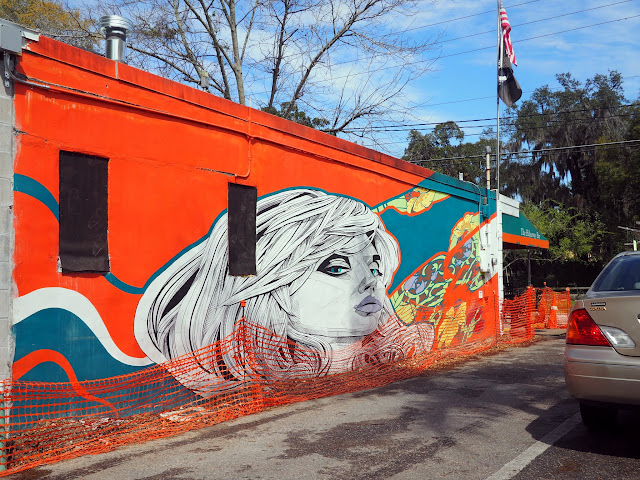 Keeping the restaurant theme going, Sherry called on Tuesday afternoon, asking if we'd like to meet her and Jo at the nearby Johnny's Other Side for dinner. Because I'd been so busy, I'd not seen Sherry for ages, so we quickly agreed. While waiting for Bruce to come home from the job site, Bill called and when I told him our plans, he said it was half price on Tuesdays and it would be super busy. He was not kidding! 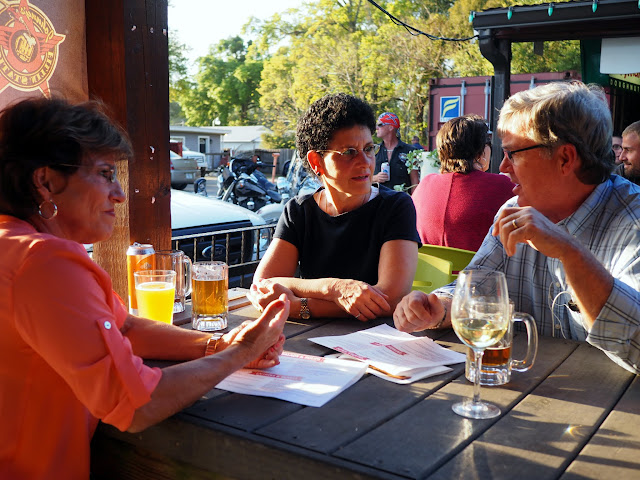 With a live band, and packed house, it was a lively evening. Plus, the weather was perfect!

Yesterday morning, instead of eagle watching, I had to take something to Bruce at the job. Remember I told you they were taking that corner of the mall apart? Well, here you go... 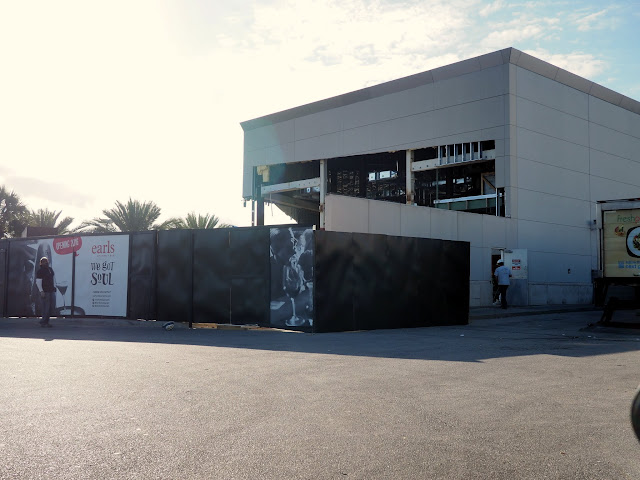 I talked Bruce into letting me get a photo of him in his hard hat, something I've not see in quite some time. 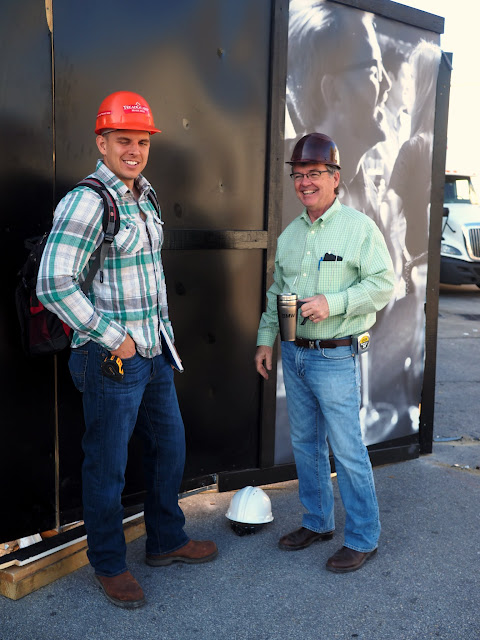 That is an old hat, one from his days at Waltree Construction where he worked about twenty five years ago, back when we had a full house of boys. Here's another look at the hoarding, as well as their website. 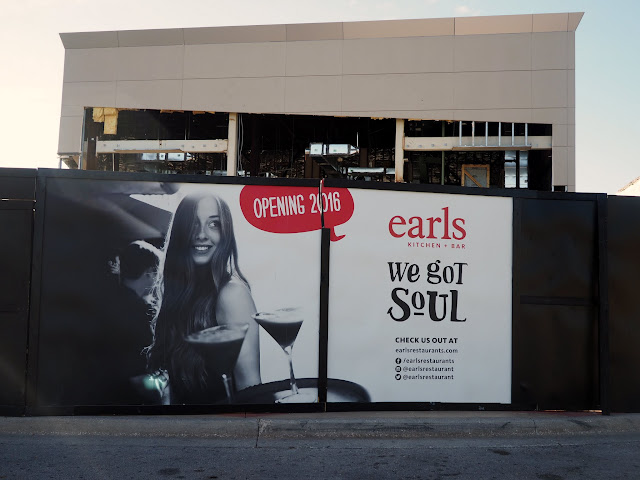 The outdoor patio will soar over the top of PF Chang...the left side of the photo. From the drawings I've seen, it is really going to be something.

What caused me to turn my car around when I saw this building, 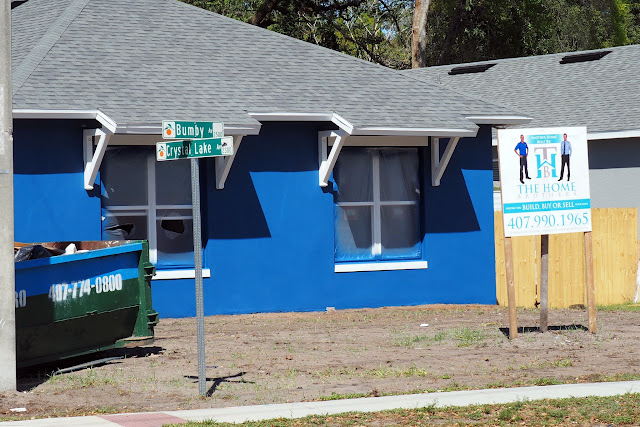 is the paint color, which is pretty darn bold. Once I had a closer look, I got a laugh at the sign which says, The House Brothers. Think they are trying to ride the coattails of the popular HGTV show, Property Brothers?

Our new neighbor, in Angela and Matt's old house, told Bruce he saw us on television again last night. I'm sure he was impressed with all the "Wows" we said. NOT!

This morning I went out early to see the almost full moon in the morning sky positioned over the lake. Yesterday when I got up I was looking everywhere, at least from the backyard, and because of our big trees, could not figure out where it was. Somehow this morning I did see it, and went to have a closer look. 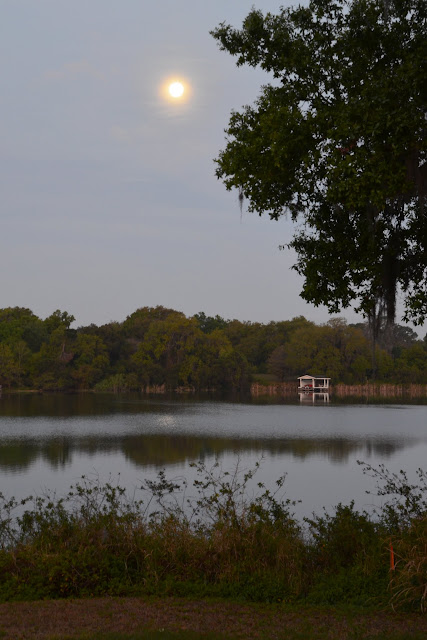 It was just before sunrise so I rode over to Lake Gem Mary, facing east, and the sky looked like this: 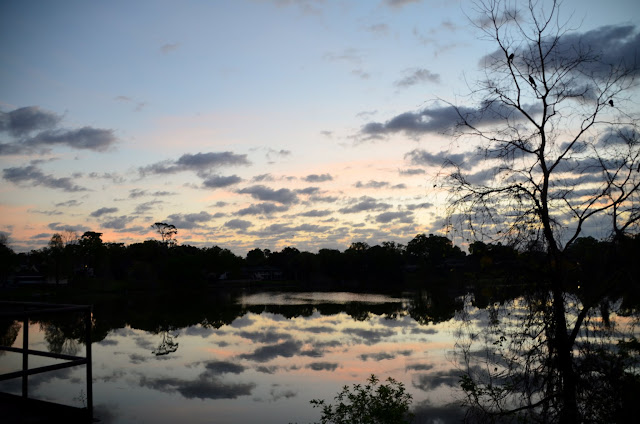 Those same clouds, or more of their ilk, began moving over the moon. 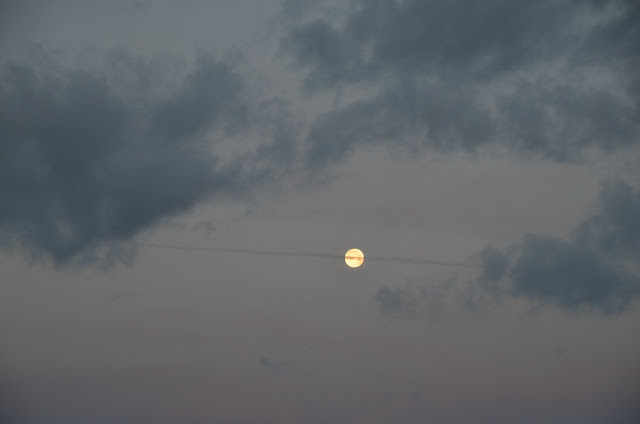 I so wonder what that red line was....

After getting some breakfast for Bruce, and because it was not too chilly, I decided to go do a little eagle watching, and was not in the least disappointed. Oh my! When I first arrived, one eagle was standing guard, which was all I could hope for. Having the second one swoop in with a fish, was even more so. Unfortunately, I was unable to capture said swooping, however, two white heads was good enough for me. 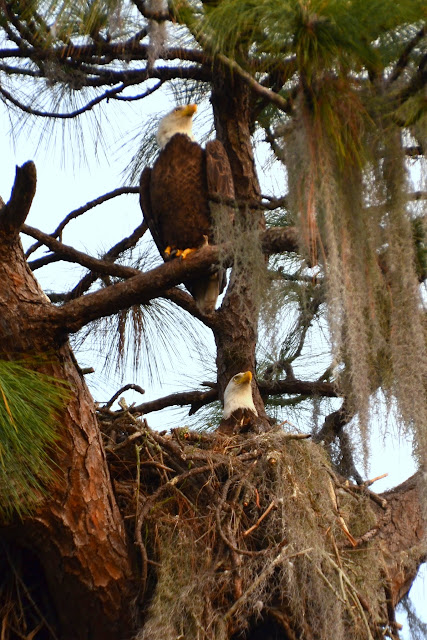 Which now leads me to believe that there are indeed two eaglets because we have seen two black heads in this post. No sooner had the one flown in, then it flew back out. 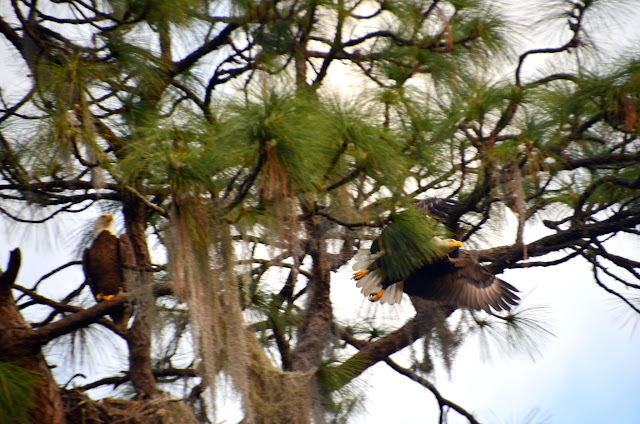 Don't you just wish I could do a better job? I sure do!

Oh my gosh...I nearly forgot to show you something that was very exciting for me. The other day, after a fruitless rime searching for an eagle, I was riding home down Waterwitch and saw a flock of birds fly from one side of the street to the other. Because they weren't all that close, I had no idea what kind of birds they were. Once I unloaded my camera card, I was thrilled to see that they were Cedar Waxwings, a bird I'd only seen before in a guide book. I know it is hard to tell, but believe me there are a whole bunch in this tree. 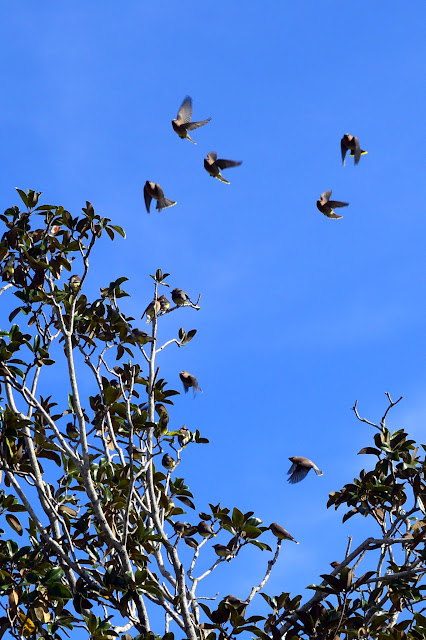 An old friend, Peggy, commented on my last post...have camera, will travel. That's for sure!

Because the job is so complicated, with problems arising seemingly every day, Bruce has set up an office in the space to better solve the little problems before they become big problems. Today, however, he is working from home, and in just a little bit we are heading over to Winter Park to watch the crane raise the cupola onto the top of the church. Doesn't that sound neat?