The Lay of the Land

August 30, 2017
It occurred to me that you might find a map of Vancouver a handy reference while reading Camera Crazy, giving you a notion of where we are in the city. Am I right about that? 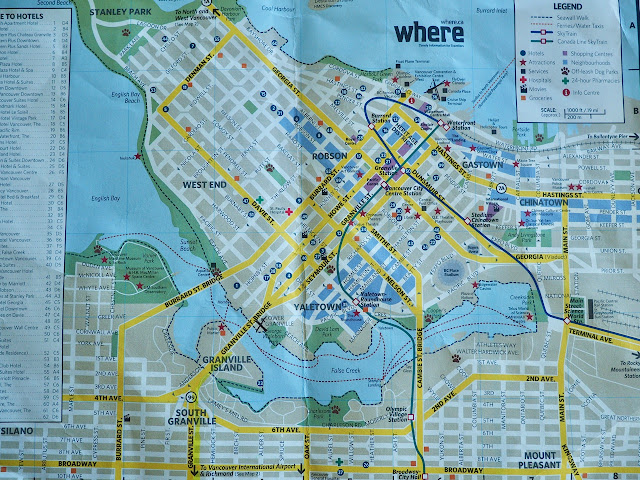 Do you see the X on the map adjacent to the Granville St. Bridge near the bottom of the map? That's us. Now you better understand the bridges as well as the parks. That map is a bit well worn already isn't it? Which is why I walked over to the Tourism Bureau yesterday to pick up a new one. Many of you have been to Vancouver while on an Alaskan cruise, whereas most of you have not. The X just below "where" is the cruise port and Canada Place, a beautiful spot if ever there were one. I took the image below to not only show another water fountain, but also point out that the mountains were shrouded in smoke again yesterday, apparently due to a wildfire in Washington State. 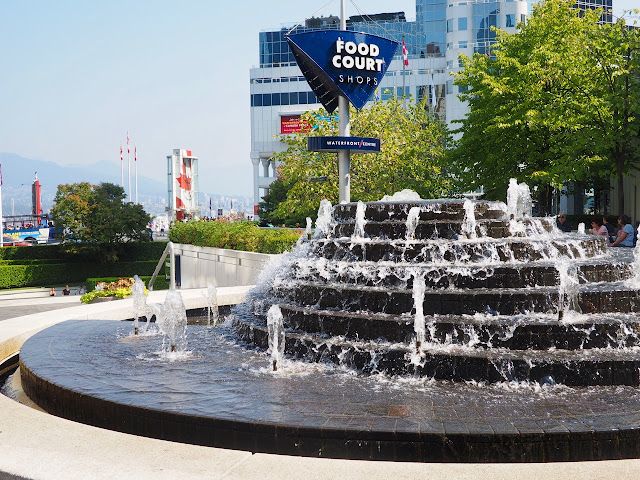 Bruce's office is located in between Chinatown and Gastown, walking distance if need be. That said, he'd rather drive, and get there quicker. That man loves to work!

When last we met in my previous post,  we'd gone to lunch at a place near his office, running into the folks who gave me the eclipse glasses (!), and having a delicious meal of bar-b-que. Plus, they serve the wine in these beautiful glasses. Plus they have Peck as part of their name. 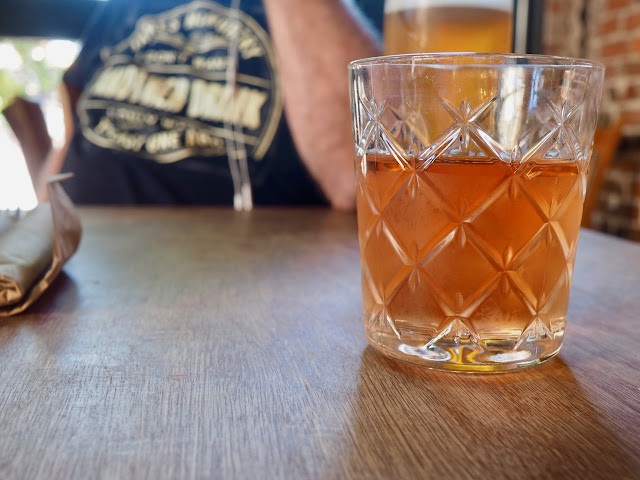 Situated in one of the old buildings in Gastown, we hope to return soon, although there are so many restaurants to try, who knows? 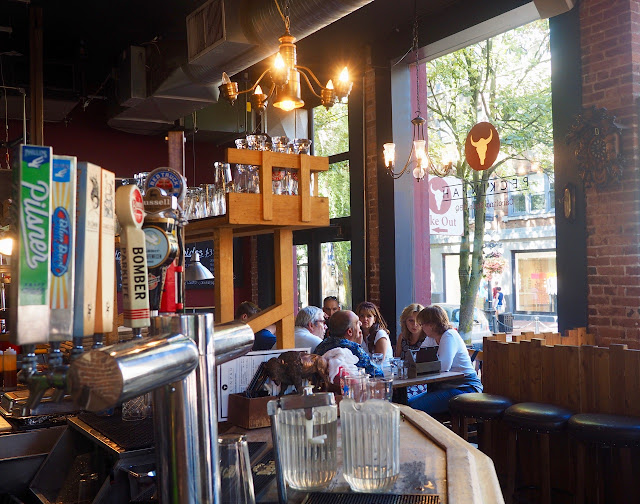 As I was walking to the office, I noticed some police officers, holding up traffic on Georgia Street and here's why. Deadpool again. 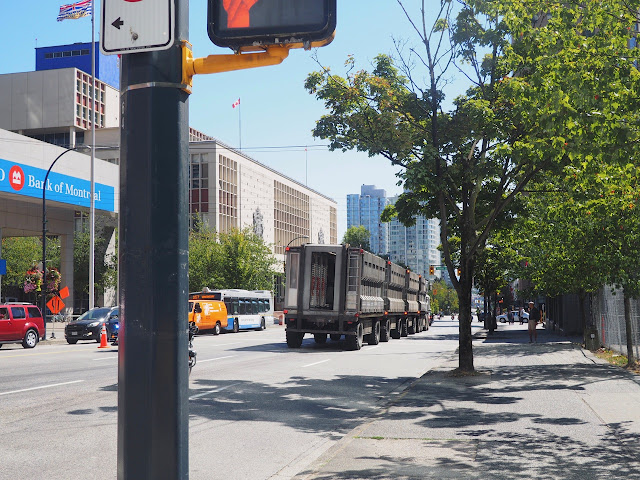 As any regular reader of this space knows, I'm a noticer. Is that even a word? It is today! That said, sometimes it takes me several viewings before I really get the full effect of something, and that would hold true about this work. 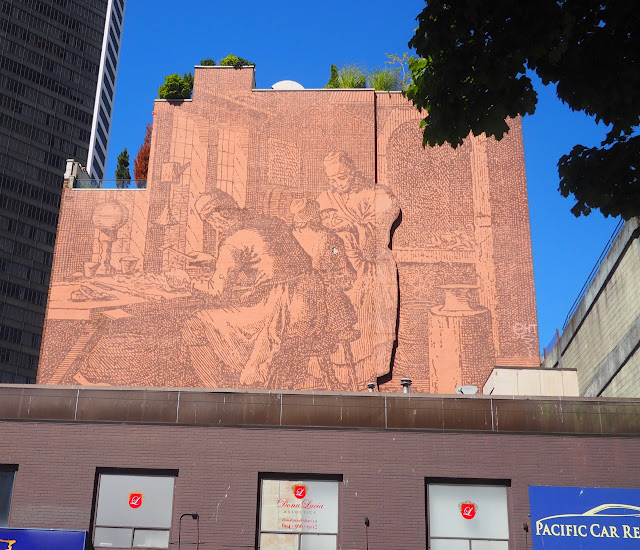 Maybe it was the light, not sure, but previously I had not noticed it was 3-D. I'd been saying to Bruce that there are so many hotels in Vancouver, which he kind of scoffed at, however, it turns out there are two types of hotels here, ones for the well-to-do, and ones for those who are down on their luck. I've decided I'm going to photograph as many of those hotels as I come across in my wanderings. Why? I don't know, but I guess part of it is getting the full picture of this city. I've since learned that there are indeed a large number of small hotels, deemed SRO's, and the picture is not pretty.  The crazy thing is that I took a photo of this sign, thinking it was interesting 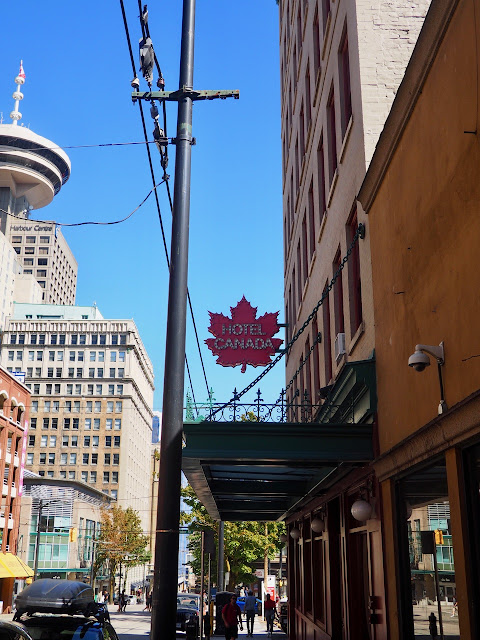 as I neared Pender Street. According to this article it was for a time one of the worst offenders, but has since been purchased and renovated. On the left of the above photo is a Vancouver landmark set for demolition. It was just the other day that I noticed the building with the revolving restaurant atop it is featured on the street sign graphics in downtown. Hmmm...

Just around the corner is, the as-advertised, American Hostel, looking mighty shabby, but I suspect you can't expect much for the $15 room charge, a real bargain in an expensive city. 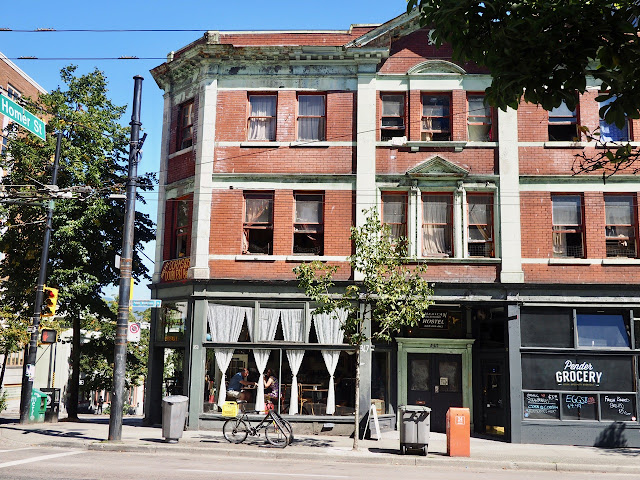 I believe I've mentioned in this space before that Gastown is the original Vancouver, everything developed up the hill from here. As such, the remaining buildings are older and shorter than the rest of Vancouver. In other words, everything has not been torn down to make way for glass towers. 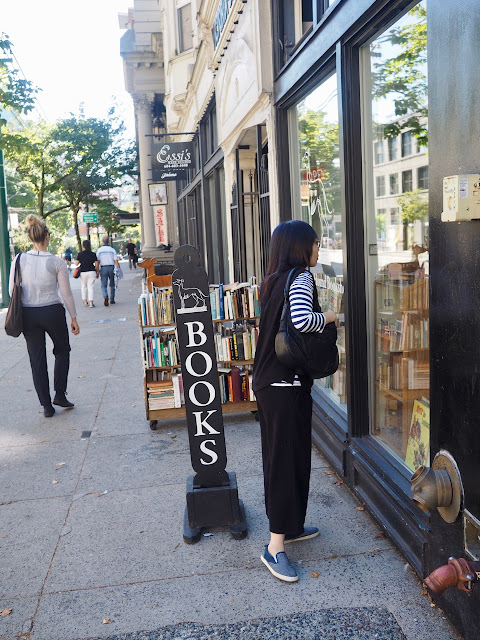 Yesterday found me in this same neighborhood, and although I began to see this mural from a distance, I chose my route there very carefully. The homeless are not aggressive, however, I still feel very uncomfortable walking amongst a group of them. Better yet, from this vantage point on Pender, I could walk as close as I wanted to through this community garden. 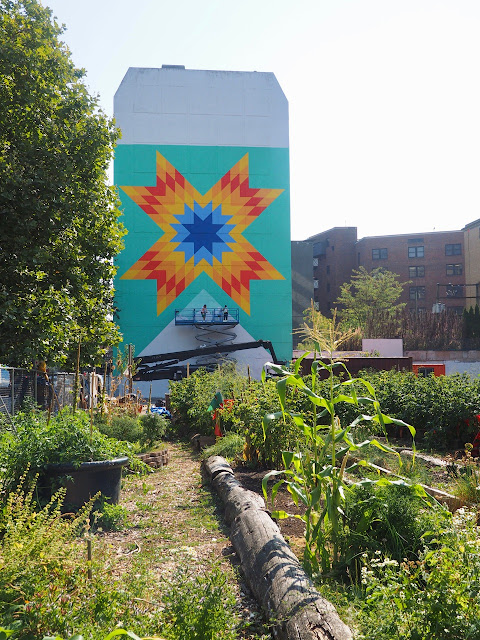 I'm heading back over that way in a bit, meeting up with a couple of the girls from the office to attend a minor league baseball game, meaning it will give me a chance to see if they have completed it yet. All I could think of was a beautiful quilt!

One thing, and of course it probably holds true for any major city, but, daily I am amazed at the layers upon layers that make up this particular city. 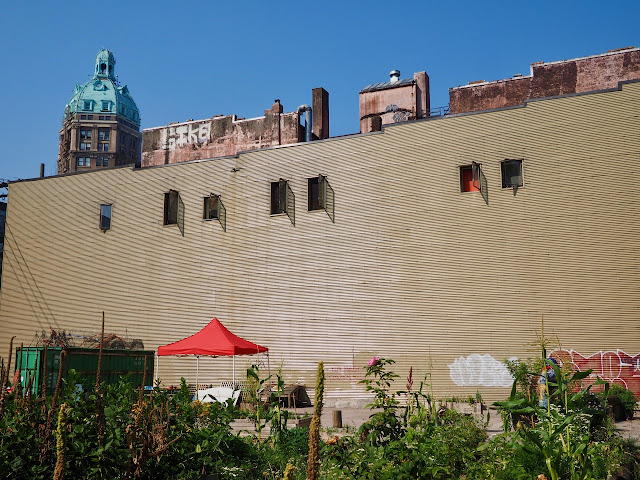 So, after lunch on Saturday, we walked back to the office, Bruce finished up, and we went home for only a little bit. I convinced him he needed to see Stanley Park for himself. Of course it was a win-win for both of us as I've only seen a fraction of it. Felt really good to be doing it in the car!

The skyline is darn impressive isn't it? 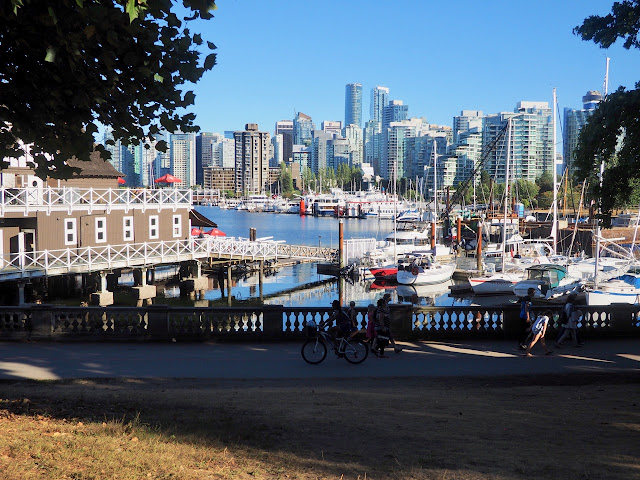 The seawall circles the park, and just like below our place, there are no shortage of people walking or cycling on the pathways. We saw a young couple having their wedding photos taken. 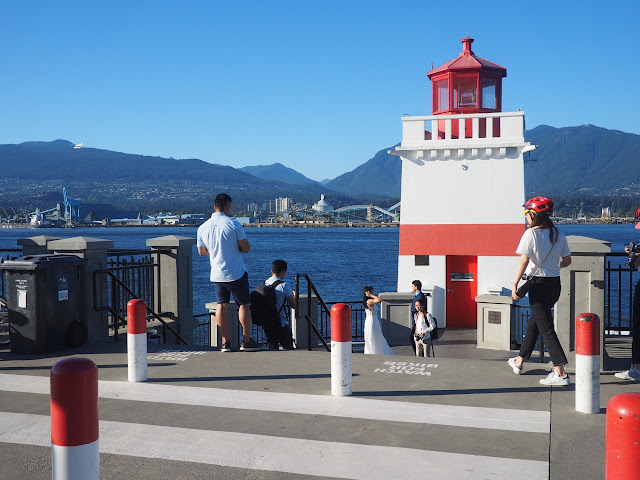 As well as sea planes taking off. Funny photo below... 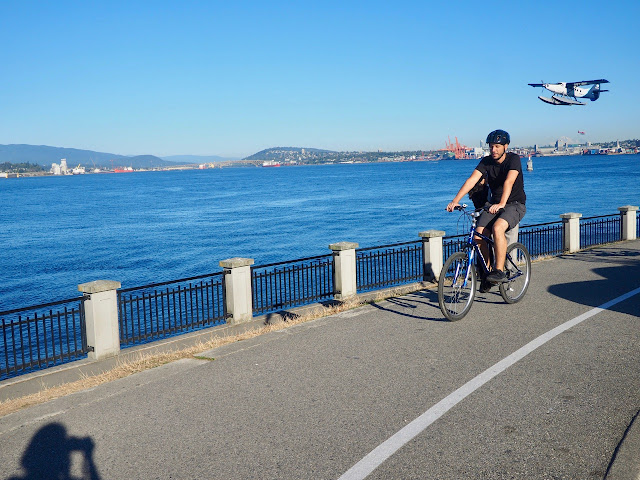 Further, as we drove the perimeter, the Lions Gate Bridge came into view. 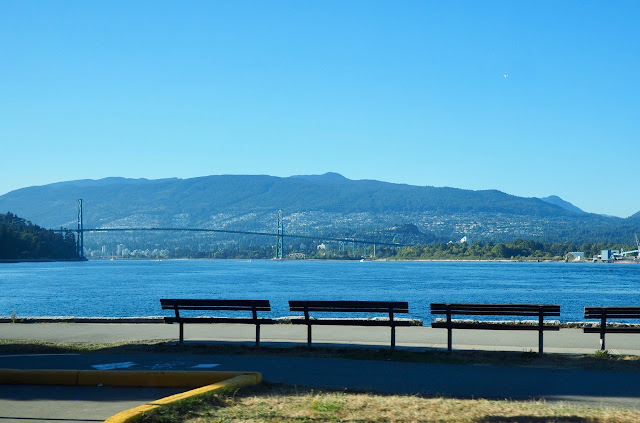 Seeing it Bruce said he wanted to drive across it, and if you can imagine, I agreed, even taking photographs as we crossed over to what they call the North Shore which is home to the mountains. 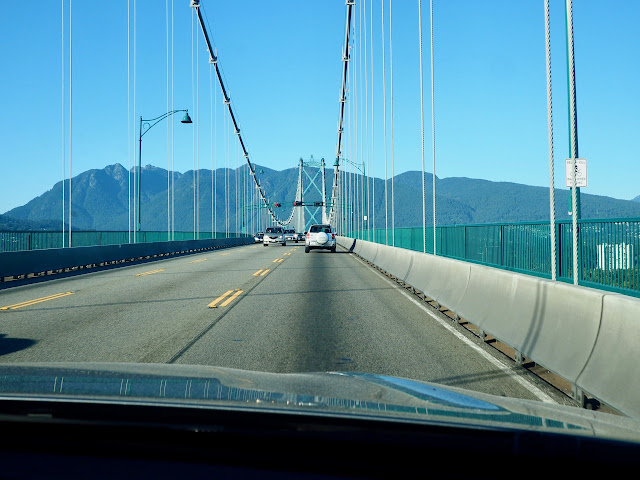 Just as I walked across the Cambie Bridge last week, folks walk across this one as well. 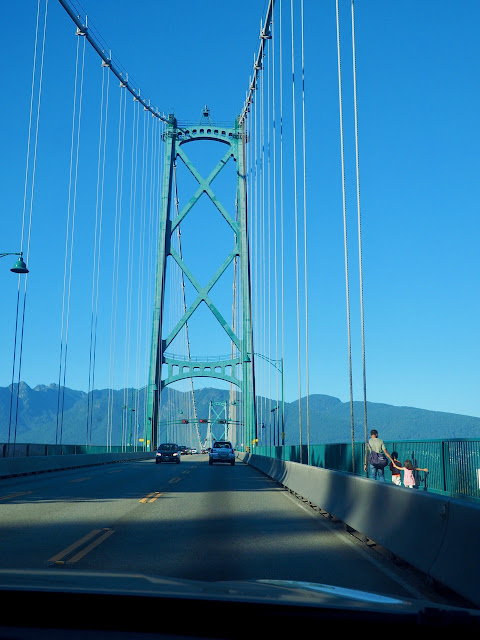 We explored a bit, happy to come across a Wal Mart where we purchased a number of things, including a small vacuum cleaner. With the windows open, my broom and Swiffer were just not cutting it.

Sunday, during the service, the congregation celebrated the pastor becoming a Canadian citizen by giving him a flag signed by all the parishoners, culminating in a rousing rendition of O Canada. 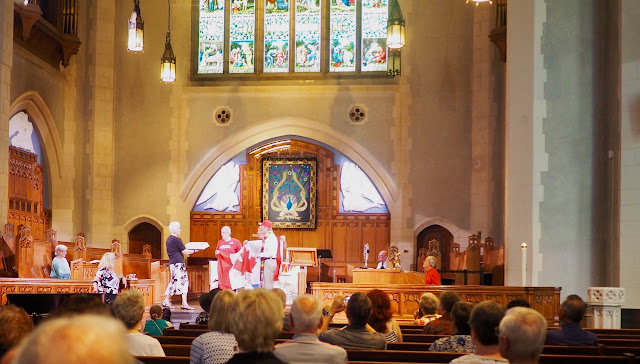 I have to admit, it made me a little homesick, but also happy that they seemed so enthusiastic about their country where there is a lot to like, especially if you have money.

Speaking of which, how about those amazing folks in Houston, and really all across America, who are aiding the affected with either their time, resources, or money? It seems as if, sometimes, it takes a disaster before we realize how much we need one another. As they saying goes, no man is an island.
Controlled water is a good thing. 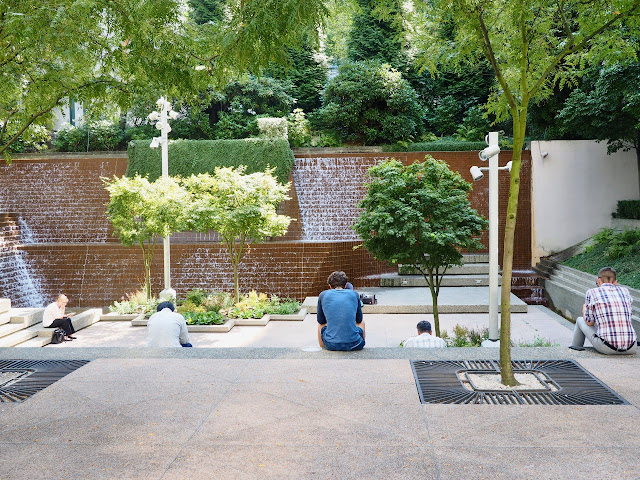 It is mind boggling to see so much water out of control isn't it?

Please do stay in touch.