February 21, 2018
It was cold on the day of the parade, not as cold as today, but enough so that we walked to Bruce's office bundled up where we planned to watch the parade in comfort. Walking down Pender we began seeing a little of what was to come. 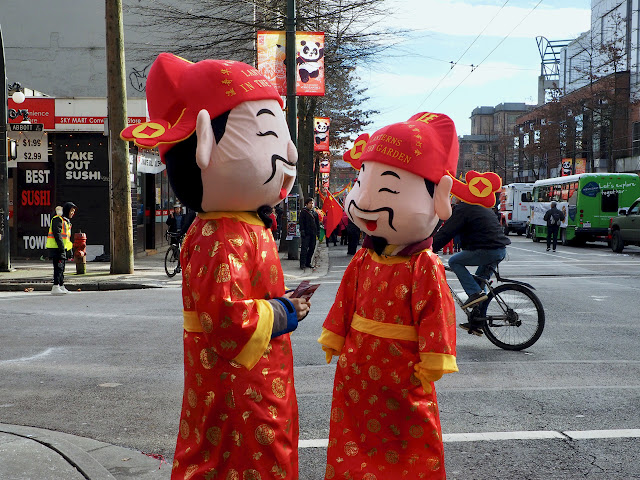 Please note the take out sushi for $1.95 in the store window on the left! Sushi is so commonplace here that it is even sold in convenience stores! 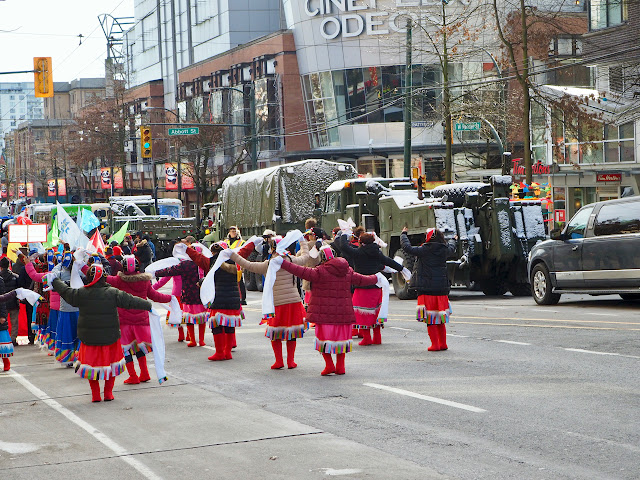 As we approached the gate to the parking lot, performers were milling about in front of it. 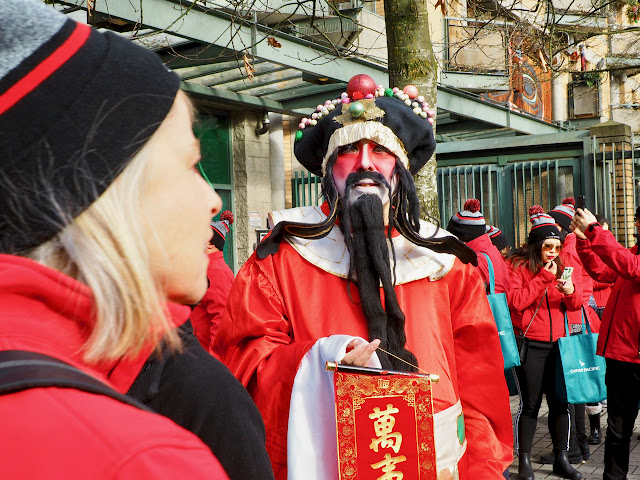 We had to hunt around for an office window that looked down upon the proceedings and Bruce opened the window that I might use for taking photographs. Friends, I have pared them down as much as possible but with a parade as colorful as this one, it was a challenge to do so.

Unlike any parade we have ever witnessed, this one was full of stops and starts, loads of firecrackers as well as horrible music. Well, not all of it was bad, but they use some sort of cymbals that I was hoping to learn about from this article, however, no such luck. Although Prime Minister Trudeau marched in last year's parade, apparently he had other things to do, however, the longtime mayor of Vancouver is pictured in the blue jacket below. 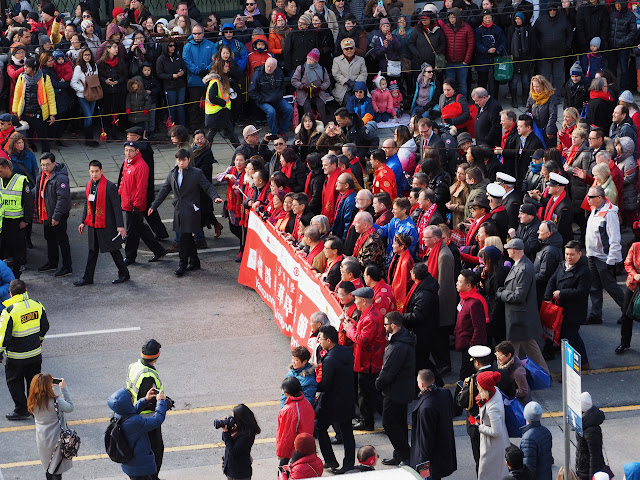 As is true for most politicians, he is both loved and hated. Following the sounds of hundreds of firecrackers going off the parade began, oddly enough bagpipers were one of the first to march. 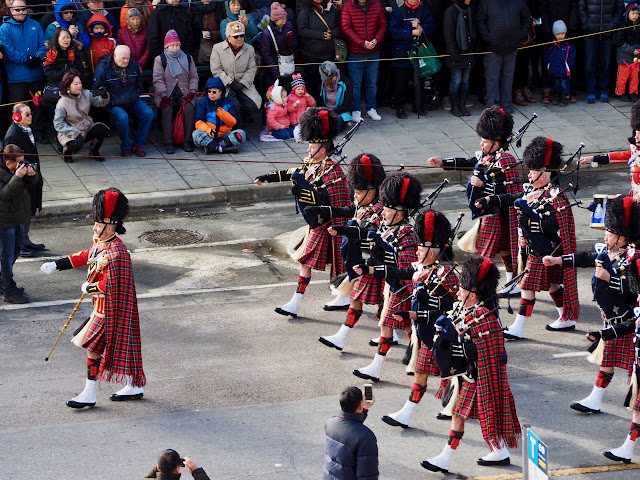 Bruce noticed that we were not the only ones watching from above, although I will say I suspect we were much warmer than he was. 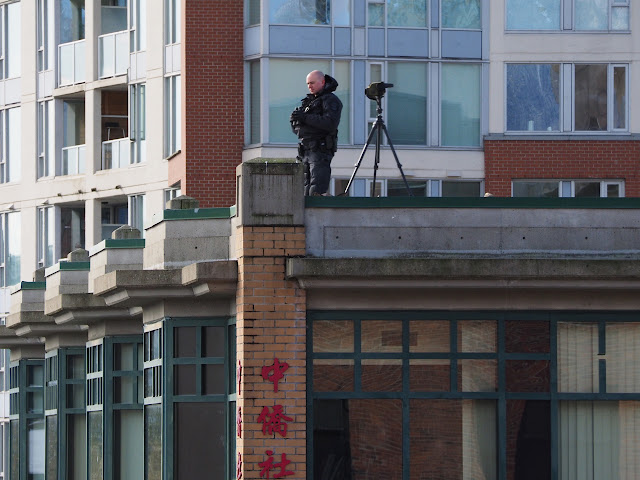 Soon the riot of color began, 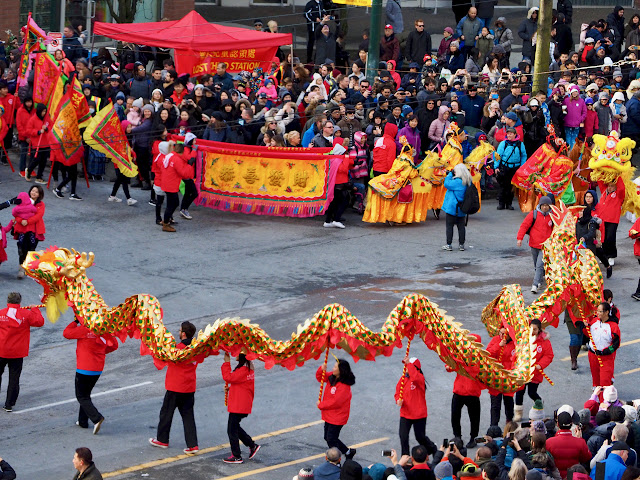 Although my spot was toasty, I did have an issue that you may notice---a cable runs through the top of many of my shots that I could not avoid including. Just a heads up on that. 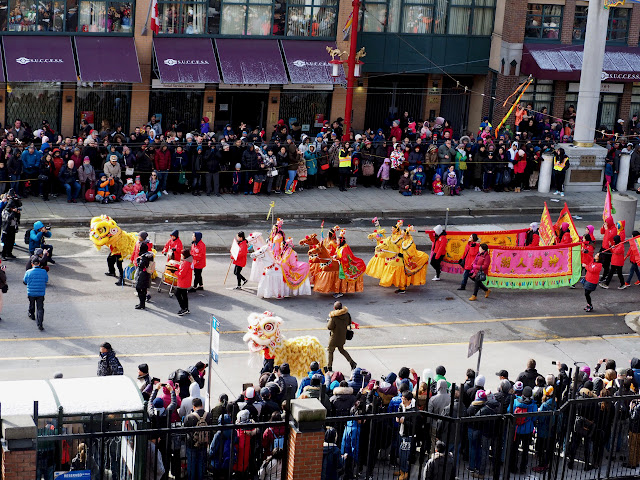 It was the weirdest thing seeing photographers get right out in the street to get their shots, beginning with only the professionals, morphing into whoever felt like doing the same. Further, note the position of the sidewalk crowd in the foreground. Later on you will see how they surged onto the pavement in front and were continuously asked by the police to move back. No sooner had they moved back than they surged forward again until the security finally tied a rope in front of them to keep them back. It was pretty crazy watching it all happen from above. 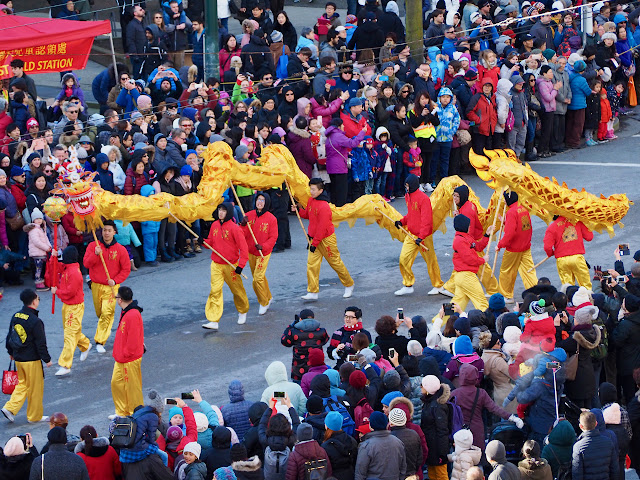 See how they are barely giving the performers room to do their thing? Is this what is called passive aggressive behavior? 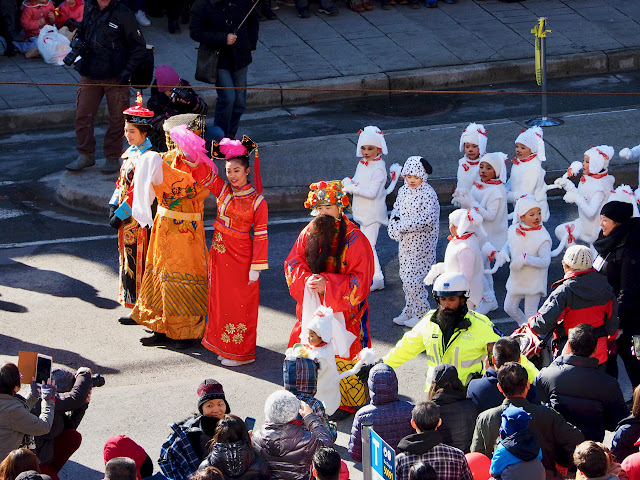 I have no idea what most of this signifies, however, this much I do know, it is the Year of the Dog and those little children are supposed to be dogs. Actually, I only think that is what they are. More color coming in the form of dancers, 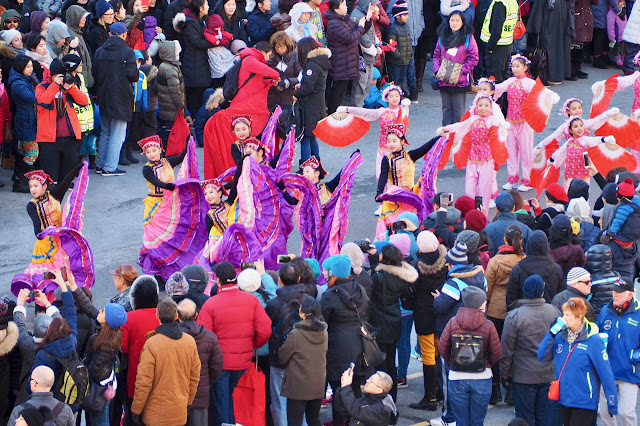 and I guess what you might call fan dancers. 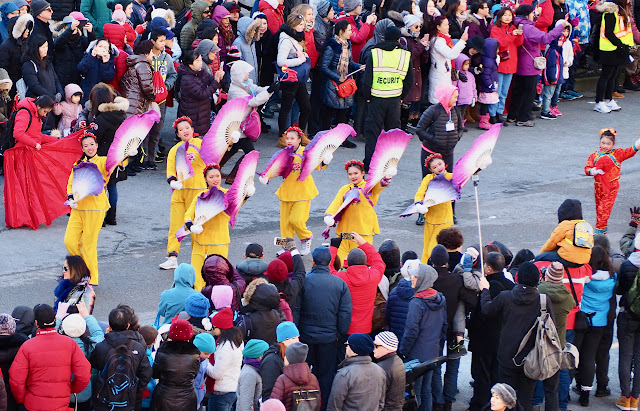 Mostly there were either women or girls performing so it was rare to see a little group of mostly boys. 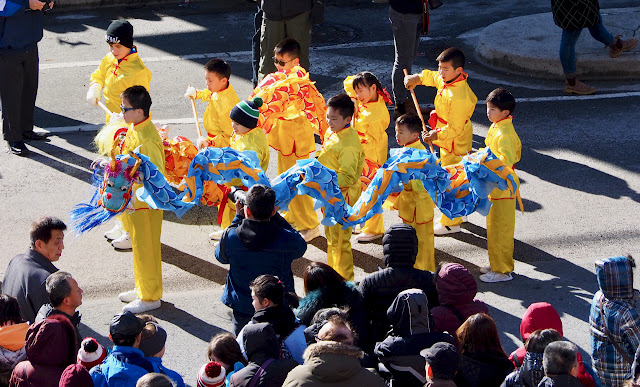 Do your eyes hurt from the color yet? There's more! Perhaps you remember me mentioning the large gate in the past? At any rate, it is a remnant of  Expo 86, a gift from the People's Republic of China. 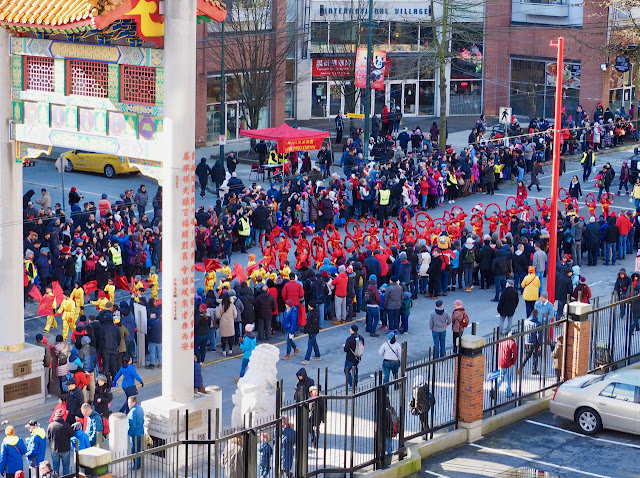 Clearly this woman is enjoying her time in the limelight. 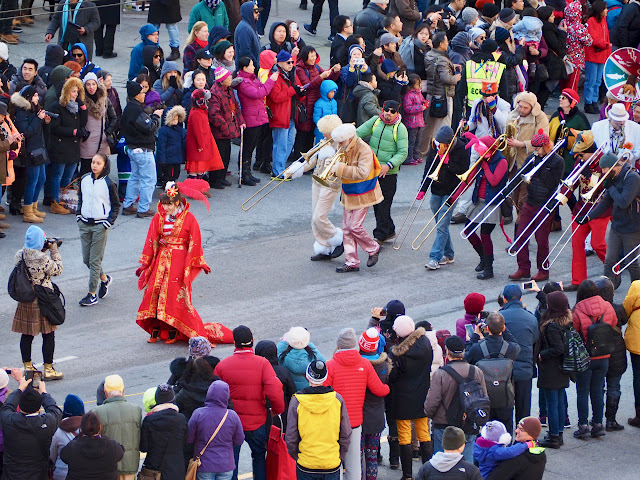 These were some super cute costumes below. 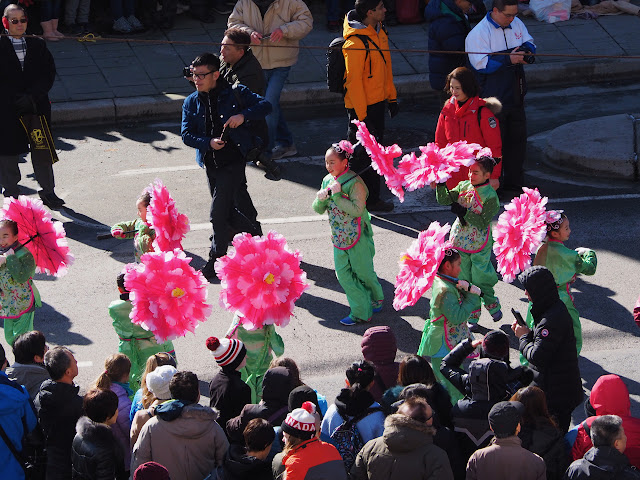 And still they kept coming. The ladies pictured in the second photo of this post, performing below. 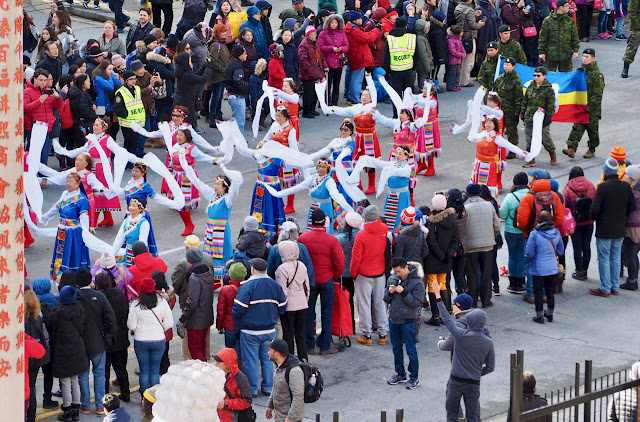 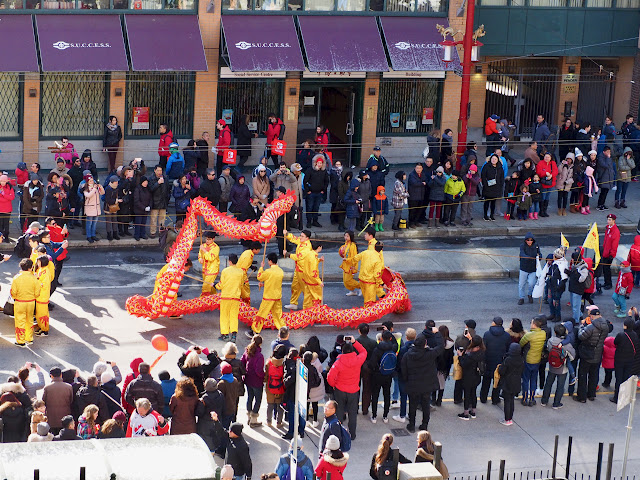 As you can see, the crowds began thinning at the end of the parade, perhaps due to sensory overload? I know I'm feeling that just posting these photographs! That said, I would be remiss not to include at least one shot of the fantastical masks on display. Plenty of them on view during the actual parade. 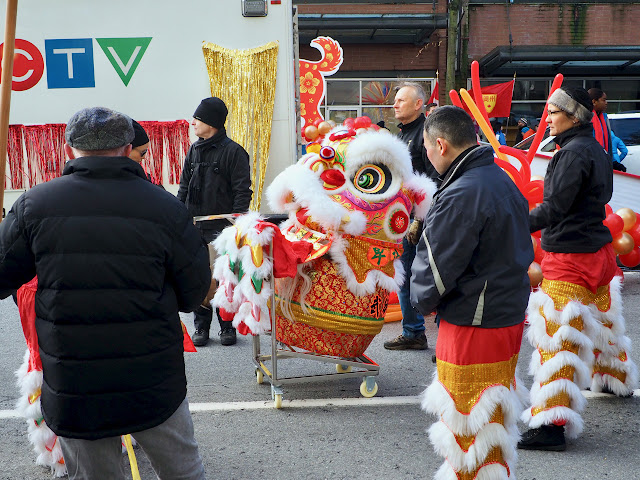 I cannot even imagine how they make this stuff, can you?

That is going to do it for today my friends although before I go, this blog post from February 21, 2017 popped up as a memory on facebook. To answer the posed question in that post, we are thrilled that we said yes to an adventure.