A Change in Weather Part Two

October 29, 2018
According to my blog statistics, very few read my last post, thus, perhaps you are unaware that our weather has finally taken a turn for the better. Well now you know. Really nice, which is most welcome news to this gal. Maybe it was just last week that it finally dawned on me that we left Vancouver amidst their best weather, arriving in Florida just in time to experience the worst weather of the year. No wonder I was miserable! Now, I am not.

Nor is this handsome fellow who is soon to retire. 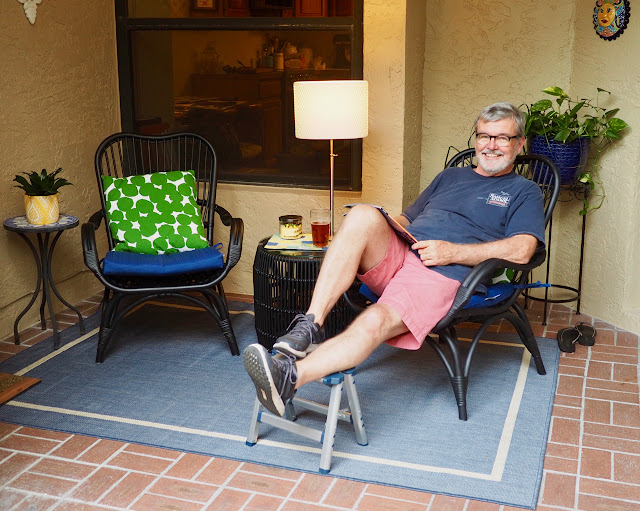 He's sporting that big smile because he is a happy camper, especially while sitting on the front porch, his favorite spot. Even more so having just found the new chairs which are way more comfortable than the ones we brought over from our home. He found the set at TJMAXX, sent me a photo and well, you see the results. He just finished bringing some power to that part of the porch and now, with a lamp, well, I imagine he'll be out here at all hours of the day and night. While he was away last week, I ordered some cushions and now it looks like this. 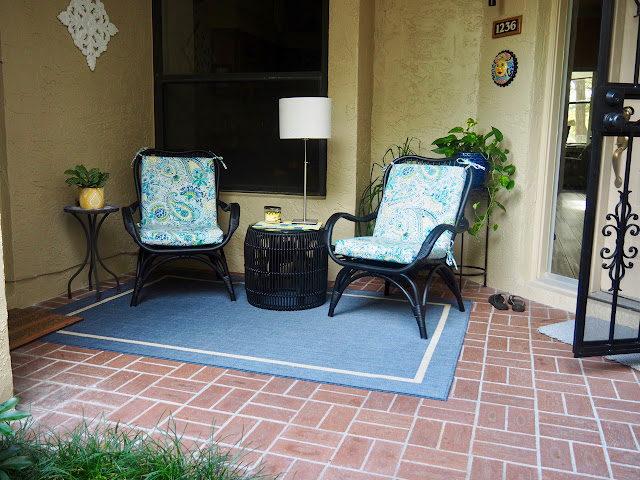 We had a chance to test it all out with guests on Friday night. Our sister Nancy has come down from Atlanta for a birthday week celebration and she's staying with Maureen to help her out. So, they came over, as did David and Michelle, and it was all good.

Here was that pile of books that I finished up last week. A new stack has replaced this one. 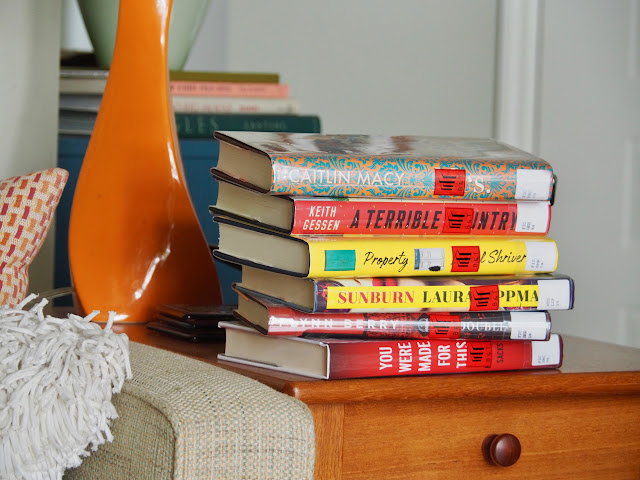 Of all things, when Matt called on Thursday afternoon, I was reading one of the new books, Tin Man by Sarah Winman. I mentioned it to him because the author lives in London. Well.....turns out he follows her partner on Instagram and because my hearing is poor, I might have missed some of this, but somehow, through the partner he learned of the wedding photographer he and Tom used for their wedding. Unreal, right? Super book, btw. I loaned it to Nancy and she devoured it.

I also finished the quilt, sewing the binding on by machine because when one gives a quilt away, one never knows how well the hand sewing will hold up. 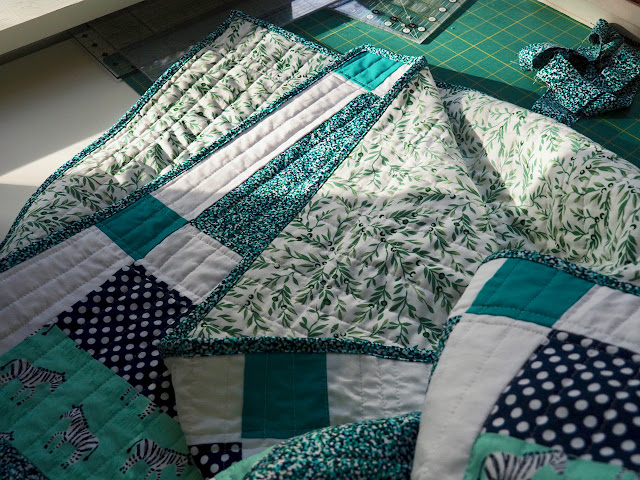 Because we've had this break in the weather, I've been out on my bicycle, seeing what I can see. Many years ago, well, make that 8, Angela and I had an amazing adventure at this house which seems to be have changed owners since our previous visit. Even if you never click on any of the provided links in this blog, this one is worth your time! 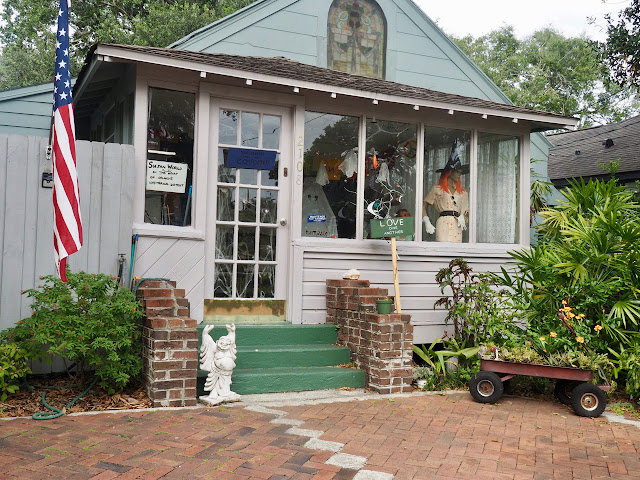 Another day I rode over to the cemetery to see if any of the raptors were around. One thing I've been seeing a bunch of are homes decorated for Halloween. This is one of my favorite houses any time of the year. Loads of these blow up guys, with about four not pictured. 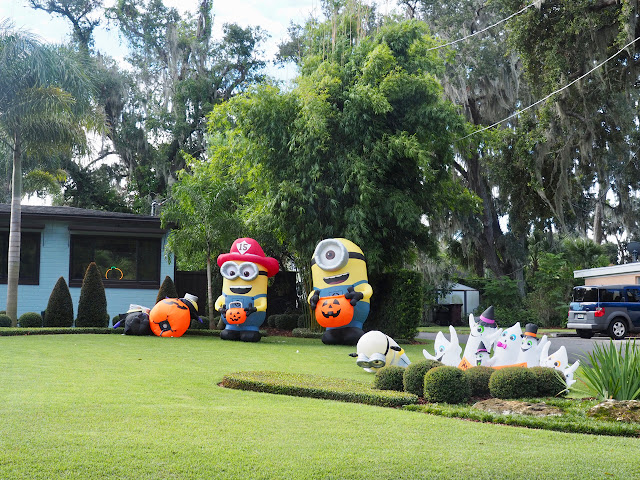 So, there was not a raptor to be found, but there was this cute little bird sitting where the eagles love to perch. 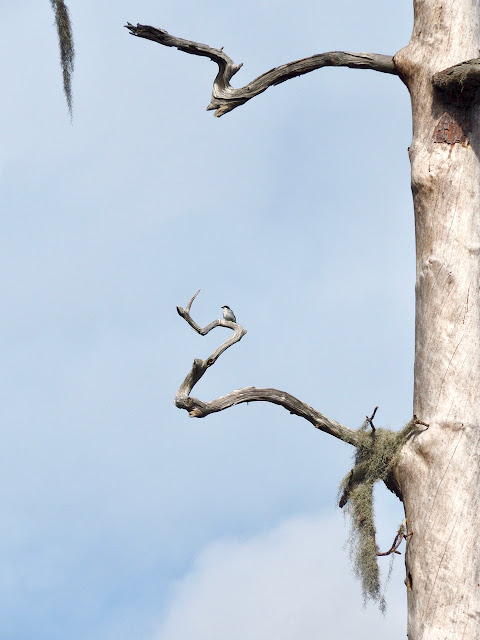 One reason I'm using the above photo is to highlight the pine tree that has lost most of its' bark. I wonder why that happened? Here it is ground level. 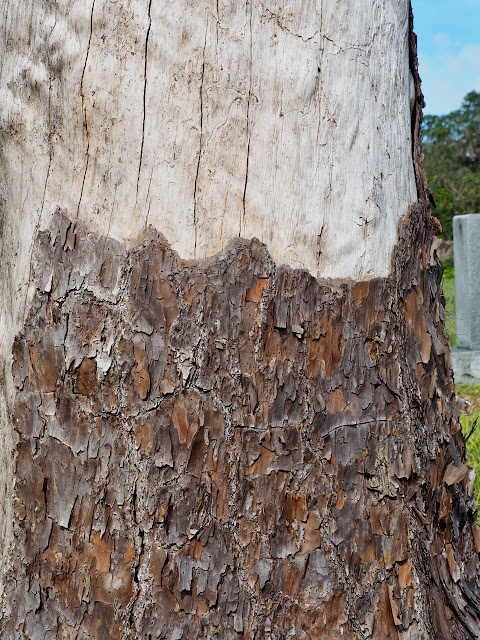 Isn't that something? There was a largish piece of bark lying on the ground nearby that I photographed, and it interested me seeing all the tiny holes in the bark. Presumably insects? 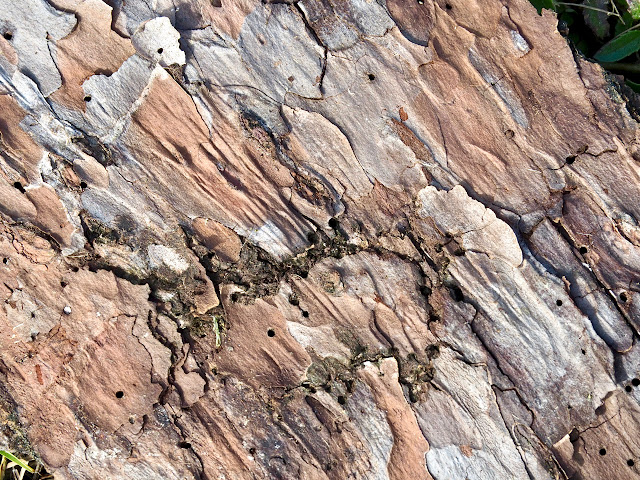 If I didn't know better, from the looks of how precise the holes are, I'd have thought someone used an awl on the tree! The pond in the wetlands, adjacent to the cemetery, was almost completely covered in algae which happens when it is so hot. I was delighted to see a Cormorant hanging around. 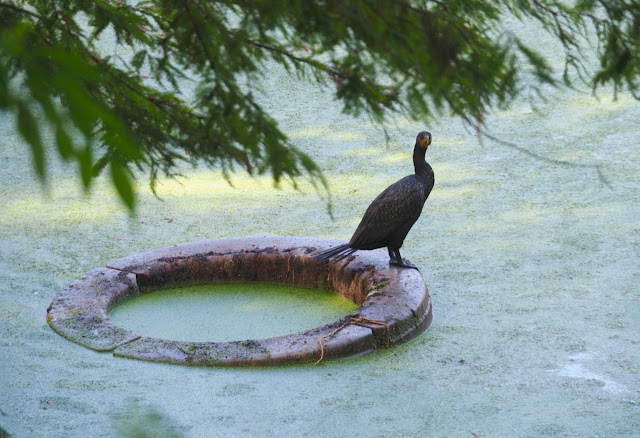 What do you think of this Halloween decoration? Pretty cool, eh? 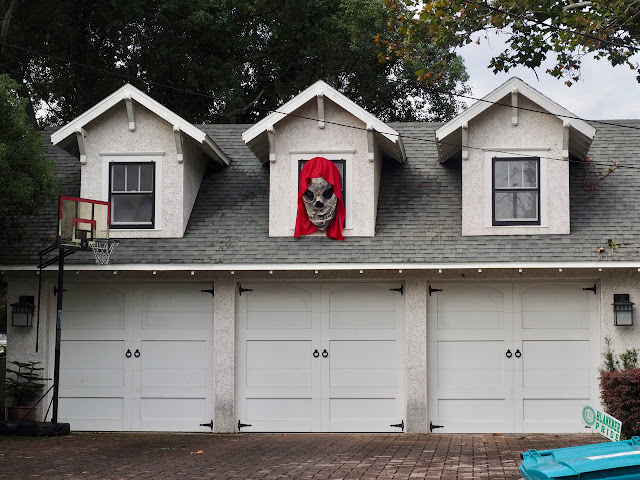 In a neighborhood behind Boone High School, I came across some more peacocks, this time in excellent light. 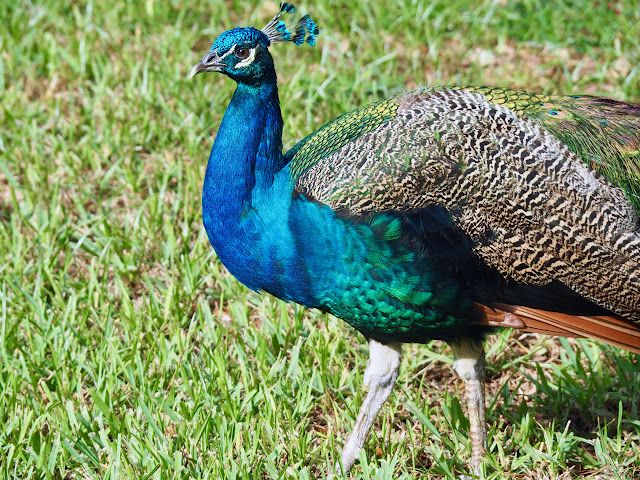 Aren't birds great? The intricacy of a peacock is just so fascinating. Speaking of Boone High, they are building a new auditorium using tilt up walls. 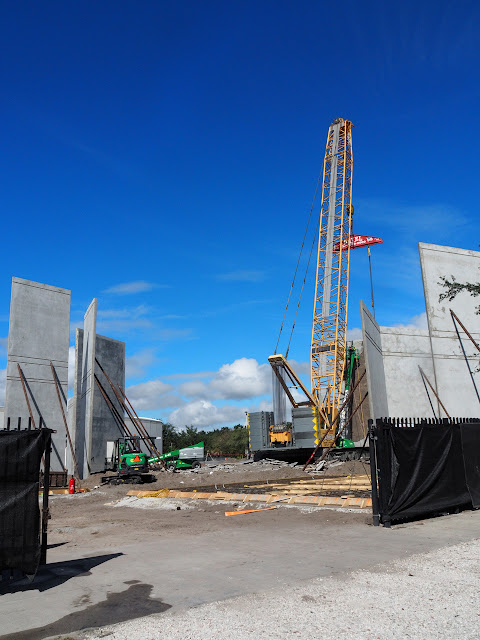 Pam was over, actually she arrived just as I'd finished talking to Matt. Here to show me a new quilt she's working on, that was but one of the topics we covered. Her Mom took a fall early last week, however, she seems to be made of steel, recovering nicely, which is saying a lot for a woman over 90 years old! She has less gray hair than her daughter pictured here beside her new Tesla. How cool is that roof? 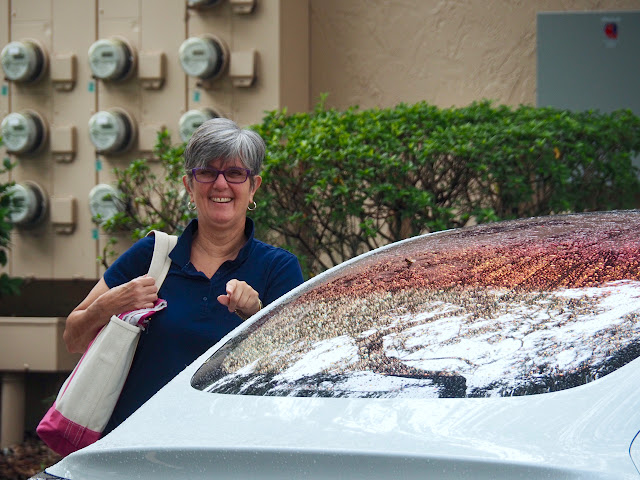 Neither of us had a good explanation for how the glass looks red when wet.

Saturday night we met up with some folks at Tibby's in Altamonte Springs, a part of town we rarely go, and less so at night. Neither of us like driving at night, a common lament of older people. Anyway, Bill Petrey and his wife Lisa had come to town. Don't know who Bill is? You met him in this post about building the airport! They currently live in Naples and were up for the weekend, inviting a group of folks to have dinner and share old stories. Most of my photos did not turn out, but this one of Bill shows what a jolly fellow he is. 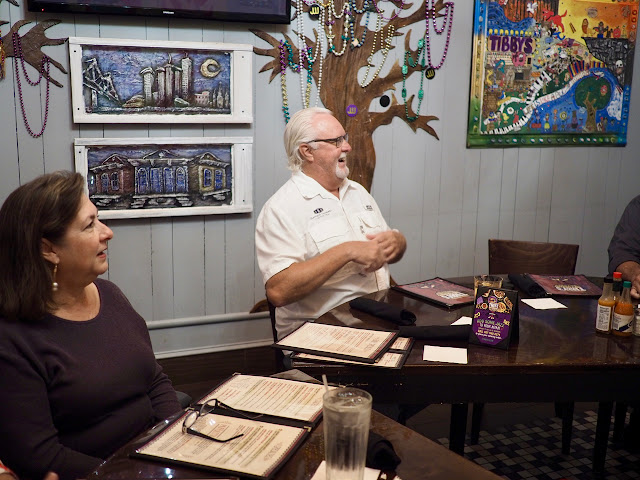 Yesterday afternoon, we arrived home to find Bill and Roxanne waiting for us to come home. Their mission was to invite us over for later. Sold! Deciding to make some cookies for the gathering, I settled on one that I discovered in the recipe purge from the previous weekend. Called, "Melt in Your Mouth" cookies, they turned out anything but pretty. In fact, they turned out downright ugly, and I wondered if I'd copied down the recipe incorrectly. I turned to Google, as one does, and I came across a very fascinating blog post about said cookies. Oh my! 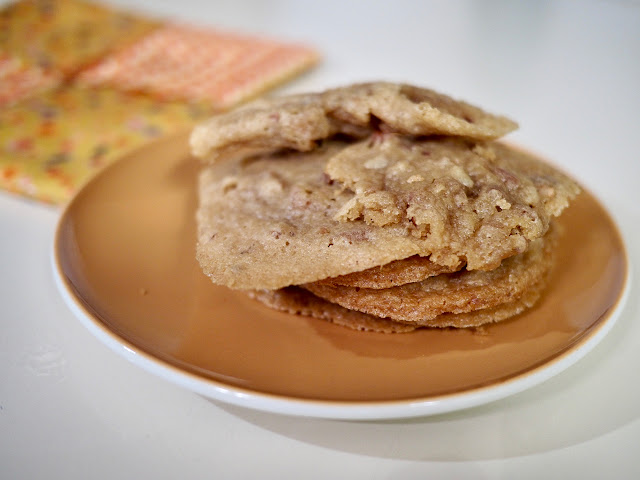 Although I saw no reason that my cookies should look as they did, I took them anyway and surprisingly, they were much appreciated, in spite of their awful appearance.

While on the subject of eating, this afternoon I saw this scene where a Little Blue Heron was dining on a frog! 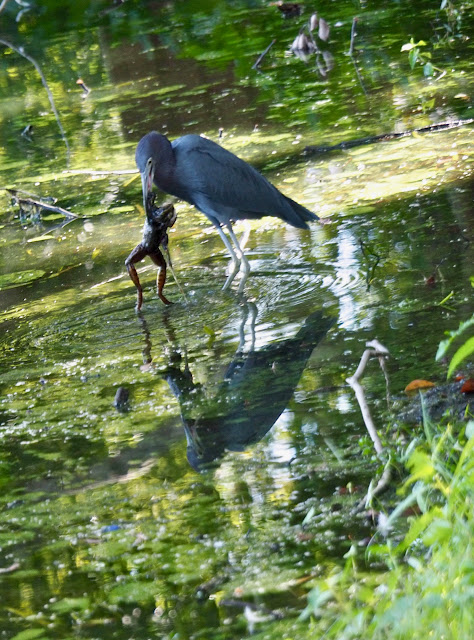 Whoa Nelly! Living lakeside has been even better than I'd imagined. 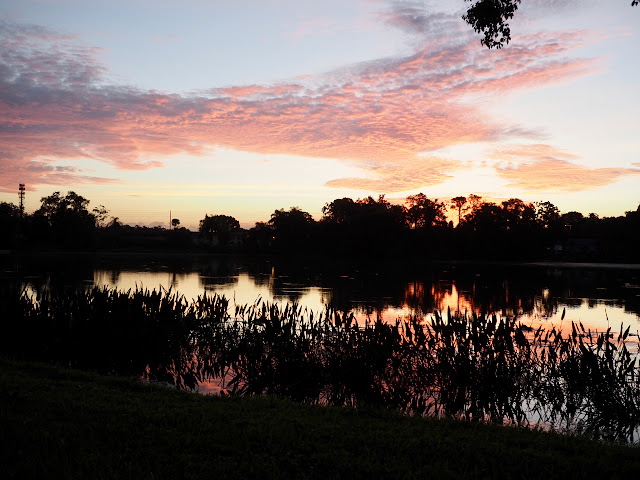 A fantastic sunrise, and on Friday night, the almost full moon rose over the lake, staining it with a silver trail.

The mundane and adventures, you will find it here. Tune in again.