September 13, 2017
Since last I wrote, Hurricane Irma made landfall in our beautiful state of Florida, wreaking havoc in all parts of the state. How weird that I'd taken this photo just last week, returning from picking up Bruce's boots from the shoe repair guy on Georgia Street. 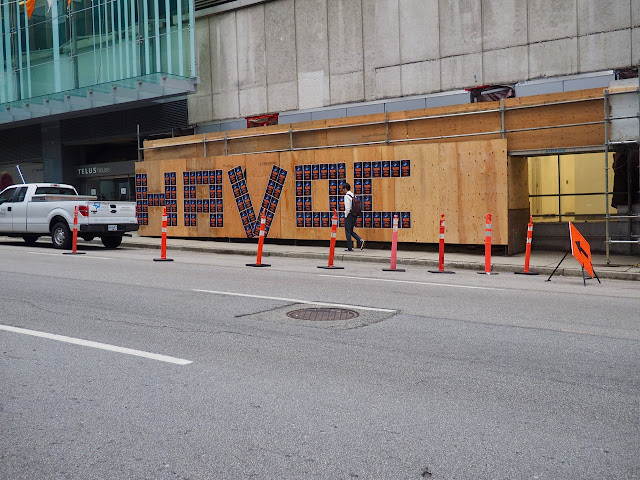 In my last post, I expressed frustration with the news coverage, and while people pointed out I could use the internet, unfortunately, that wasn't really much better than the television coverage. Everything kept saying it would first hit Miami and the surrounding cities, and when they didn't happen, it was Tampa/St. Pete, and when that didn't happen, the only way I learned it was heading straight to Orlando was from Facebook! Bill called, saying their power was out, asking if it were coming their way; it took me quite a while to find a site that showed it was not merely a rumor. What the heck?

Friends and family described a harrowing night with little to no sleep, what with the winds howling, the rain pelting windows, and the sound of trees and their large limbs falling. And, of course, no electricity, which made it even worse. Hurricanes are a given in Florida, however, when they do hit close to home, just when you think you are mentally and physically prepared, it is still a shock to the systme. As I type this, both of our sons have power once again; a real blessing as others are still waiting. This morning I heard from Regina and as was the case with Hurricane Charley, our house, well, what was our house, took the worst of it. Something about having a corner lot seems to attract the neighborhood debris. She also said two giant limbs fell from the front yard oak, barely missing the bedroom window! The staghorn fern is still in place.  I do not miss the clean up I can tell you that much. Bill worked for seven straight hours cleaning up his yard and pool in the broiling heat of Monday. I'm so thrilled they now have air conditioning again!

We were nervous, Sunday morning, on our walk to church, wondering what was happening in Florida. The service provided a calm relief. Afterwards we went to lunch at Joey on Burrard, a few blocks from the church. 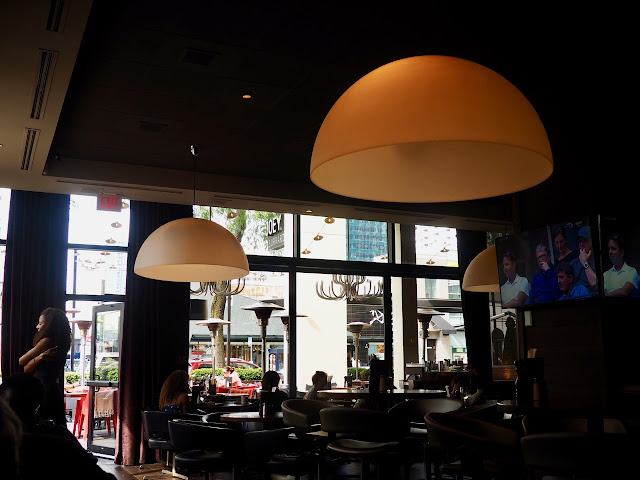 The Fuller family is made up of four brothers, three of whom are in the restaurant business. Their holdings are Cactus Club, Earls, and Joey. I know my sister Nancy is much like me, wanting to know more, so I'm including this link to an article about Stan Fuller who owns Earls.

Lunch was yummy and to walk it off, I showed Bruce a few of the places I'd discovered during the week. I am learning first hand that when it is sunny and warm, it is best to be outdoors. We've had a few of the gray days the city is known for, and I will definitely be in for an adjustment period. 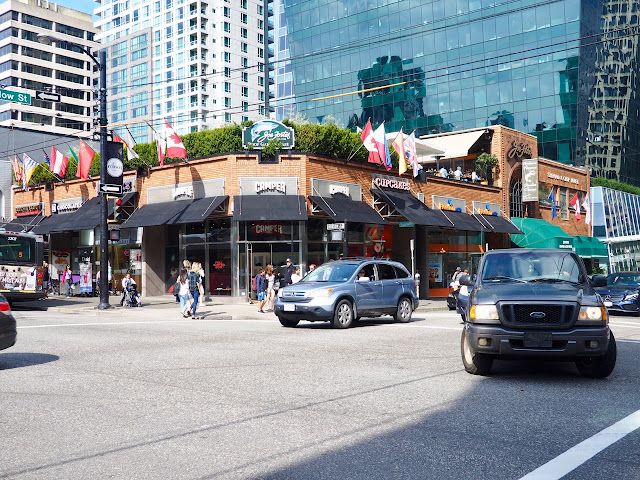 Rooftop bars and restaurants are not uncommon here.

We walked back home through the lovely West End.. 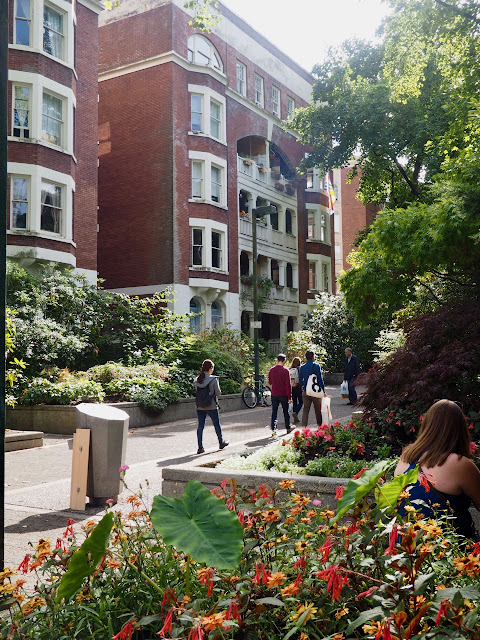 Here is a color combination you don't see much in this city. A darling oasis. 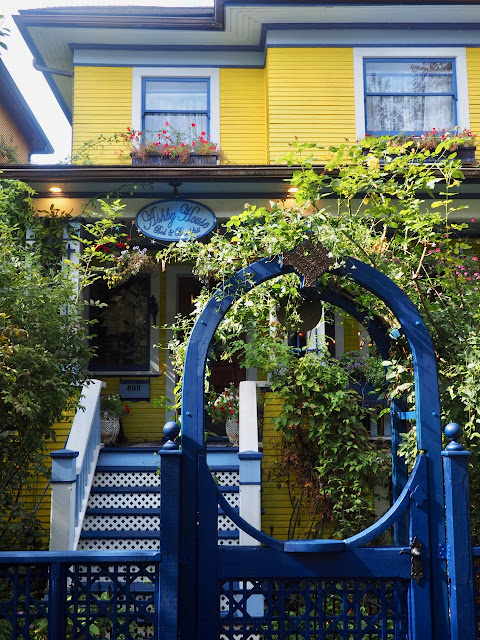 Monday morning dawned bright and sunny, so I decided to tackle the bridge. The Granville bridge that I've looked at every single day since moving here. Looking at it was way more intimidating than actually walking over it. I'd been thinking it was a long distance, but it was actually really easy, affording great and different views. Just across the street from us, in a diagonal fashion, they are building Vancouver House, what is described on their website as a total work of art. I knew it was going to be sort of twisty and from the bridge I could actually start making it out better than I canfrom the ground. 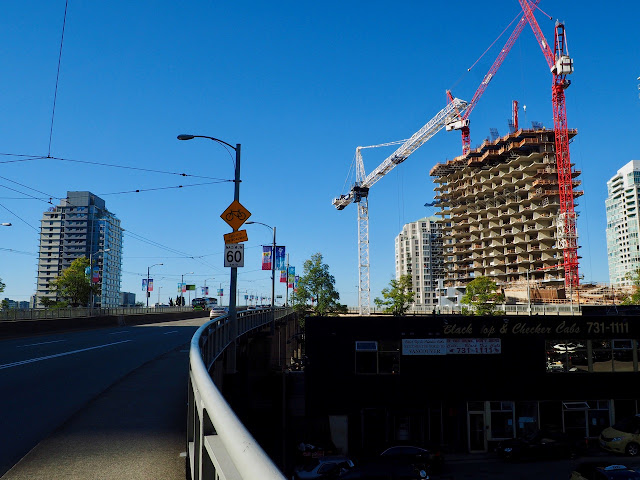 All of the high rises under construction have huge pits beside them for parking garages, or so we presume. Lots going on down there. To actually get on the bridge I walked two blocks north to Drake Street and Granville. I began walking, turning around to see what I could see. The North Shore mountains I see at the end of the downtown streets came into better view. 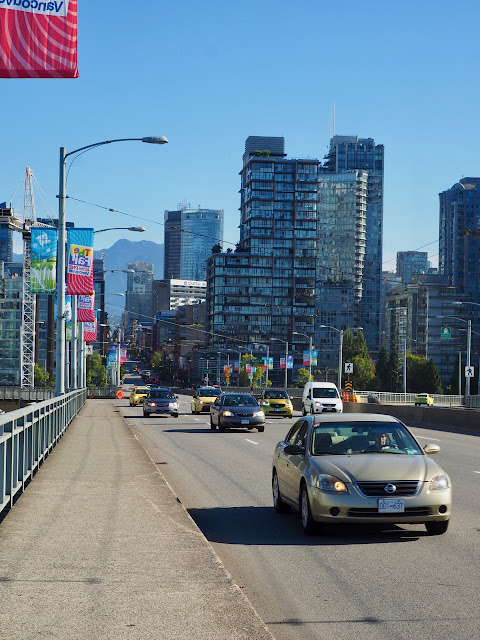 Unlike the Cambie Bridge, there is no separation between the pedestrians and the cars, only an elevated sidewalk, thus, when I tried to take the shot below, it was difficult, but it did tell me the bridge opened when I was just a baby. 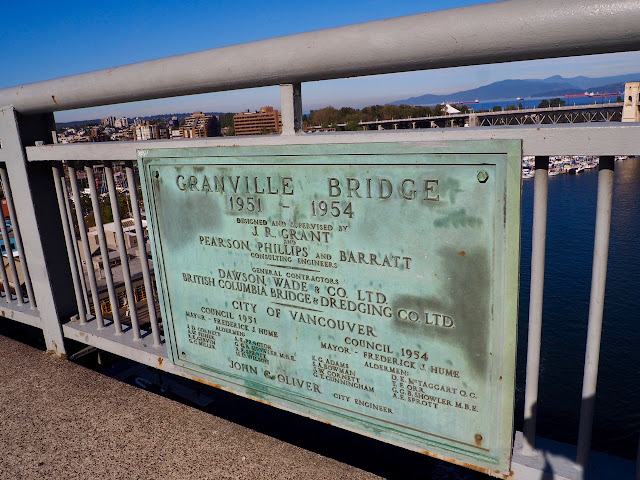 The views are grand. 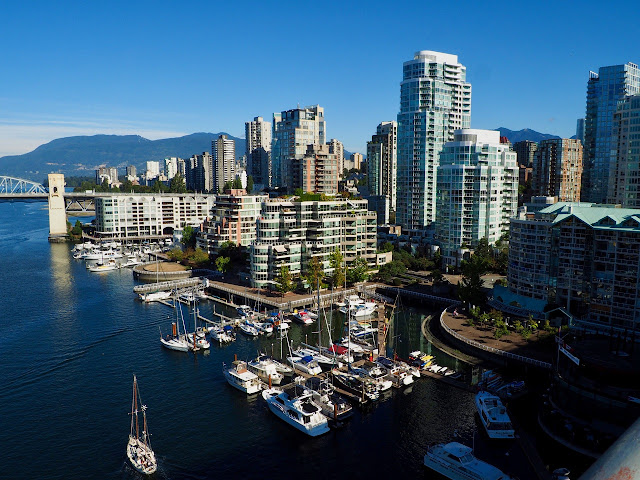 And become even grander as you continue crossing... 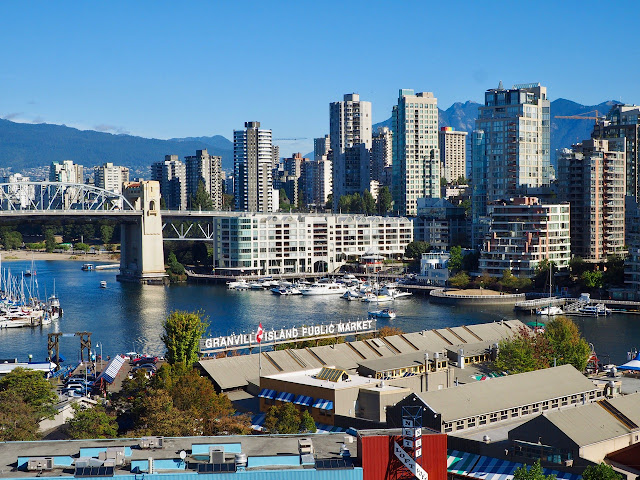 This Florida girl cannot get enough of the mountains!

My mission was the Granville Island Public Market, which actually sits under the bridge about halfway across, meaning there is some backtracking to do. I ended up on this street with the helpful sign indicating where to go. 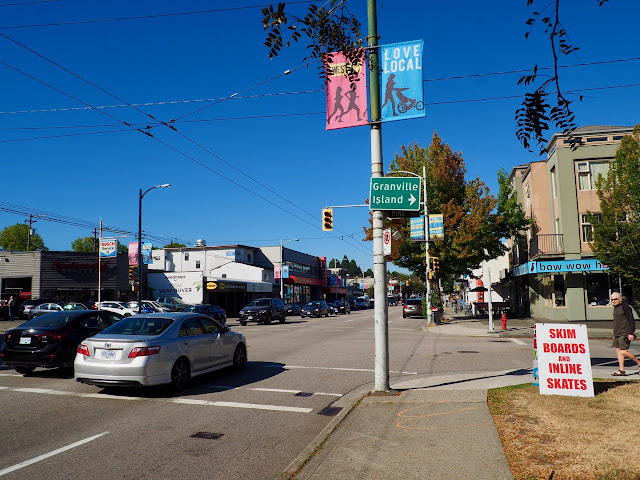 I took the right hand turn as indicated ending up on a street with some serious luxury car showrooms, and I'm talking Lamborghini and McLaren to name just two. I walked until I came to First Street coming across the headquarters for Lululemon, a brand that Vancouverites are very proud of. 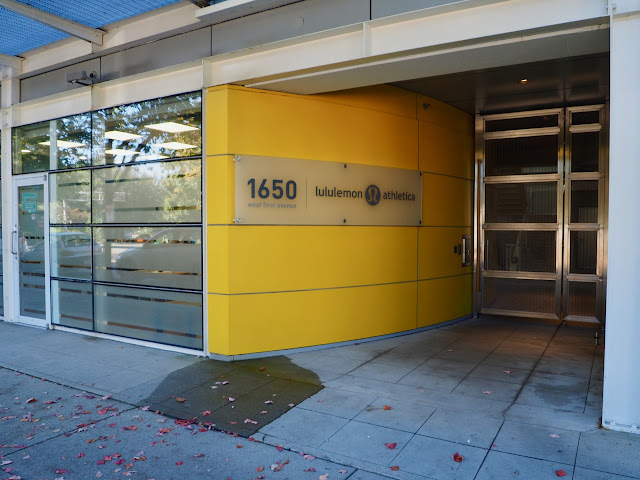 I kept walking for a few blocks eventually getting to the market. What I should have done was turn to the left when I got off the bridge. You live and learn. Or, you walk and learn in this case!

I so love the colorful fruit and vegetable stalls. Have you ever seen this shape of grape before? I had not. 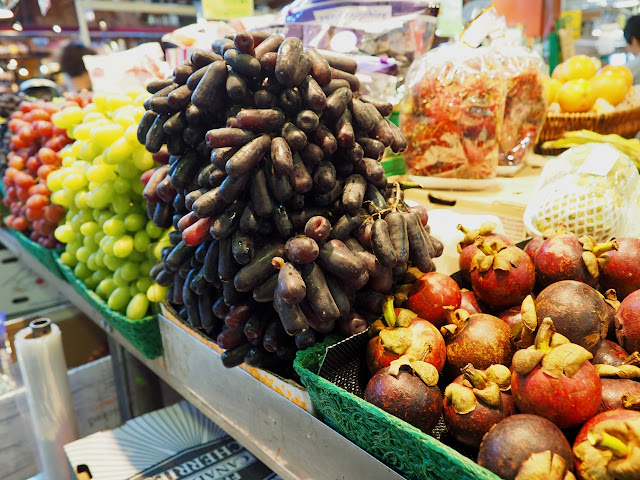 Near and dear to a Floridian's heart...the citrus section. Note how things like celery are sold by the pound. 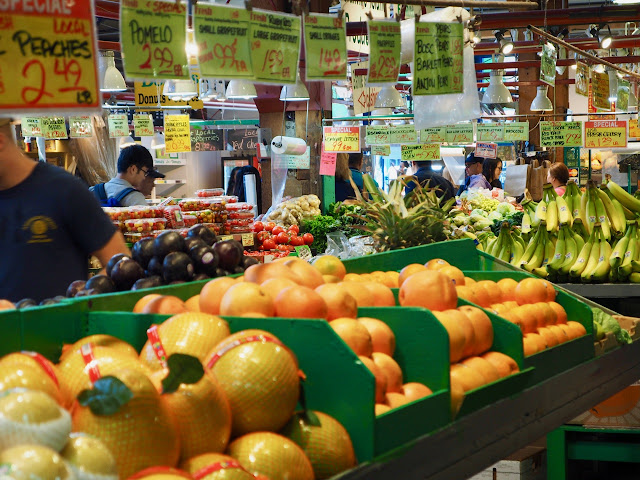 I went into the quilting shop on the Island where they display some of their fabric like this: 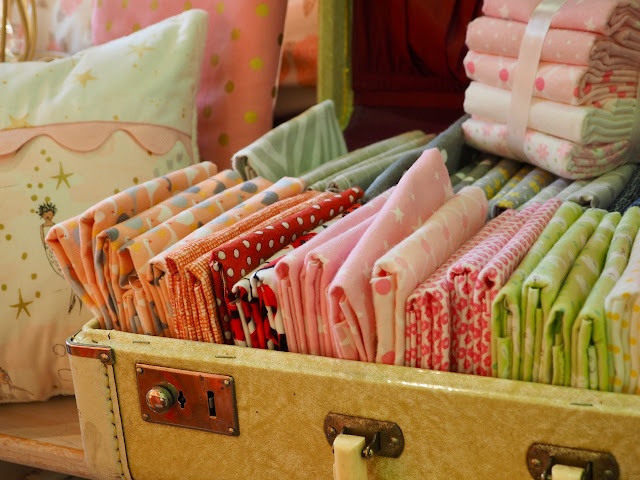 It is a cute, albeit small shop. Like a complete dummy, I left both my rulers, and cutting mats at home, tools that I really need, however, I won't be buying them there because they are crazy expensive. Bruce will be going to Seattle with some regularity for the next few months, so I'll send him on a buying mission there where it is bound to be less expensive. Or, so I hope.

Being the curious type, I did some exploring. You've seen these guys from afar, here they are a little closer. The plant is non stop busy because this city has some serious concrete needs. Cranes everywhere! 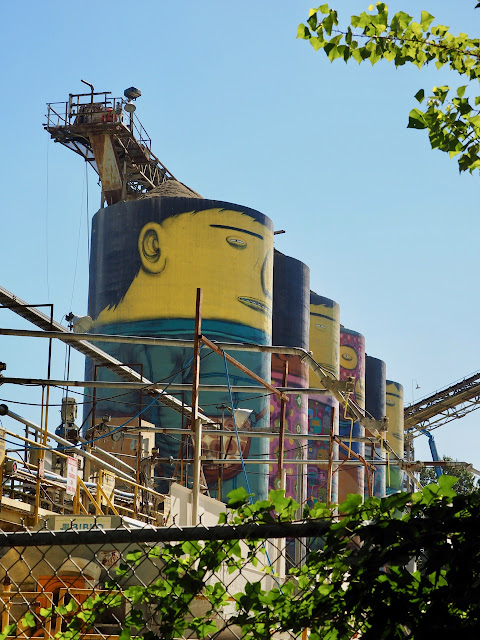 A view towards the condo... 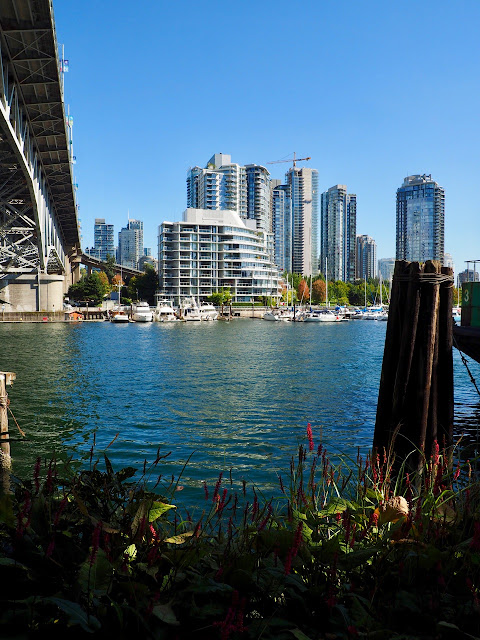 Behind the squatty building in the foreground, my balcony seat is visible.

From that balcony seat, I'd seen this flag, but I didn't know the ground it was established in until Monday. 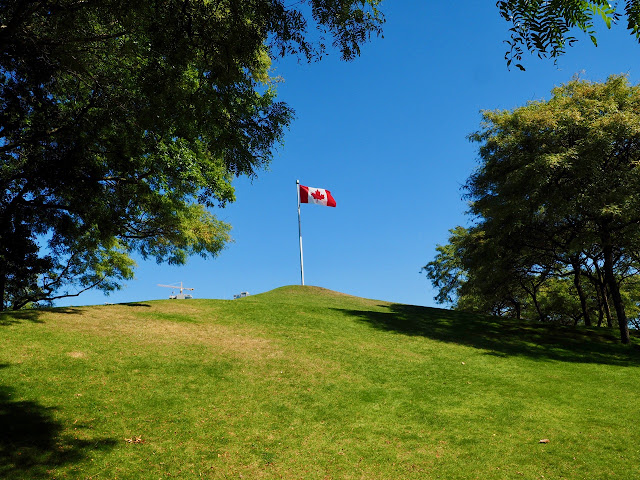 I walked up the hill and now I know what it looks like around the corner that I can't see from the balcony. 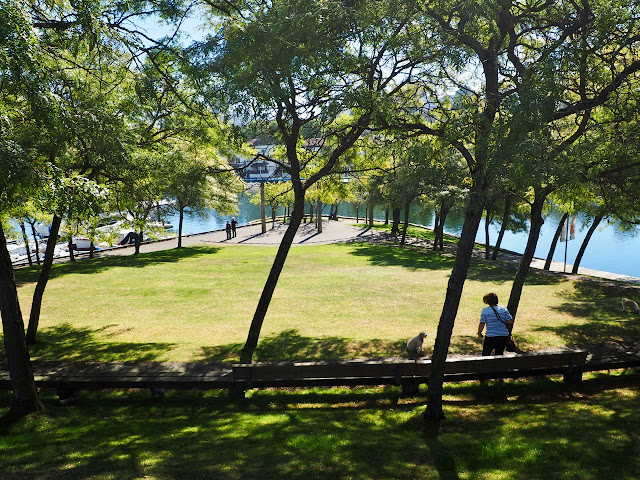 When it is a pretty day here, it is a pretty day. I know that sound crazy, but it is the only way I can think of to say it. Good skies, good views, good temperature. When the skies are gray, not so much. We will enjoy the blue together as long as we can, you and I. 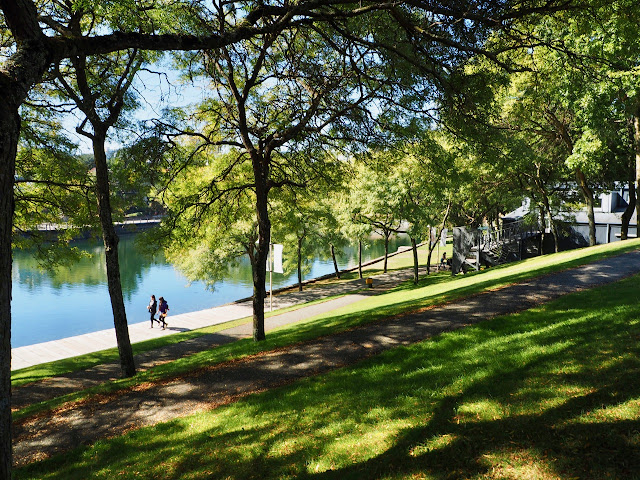 I left the market laden with Italian sausages, olives, jalapeno pickles, apples, french bread, and a few bagels from this stall. I did return via the ferry this time but only because I had groceries. I actually talked to a woman from Houston while waiting for the ferry...as you can imagine, she said it was indescribable living through Hurricane Harvey. Those poor folks are still living with havoc, aren't they? 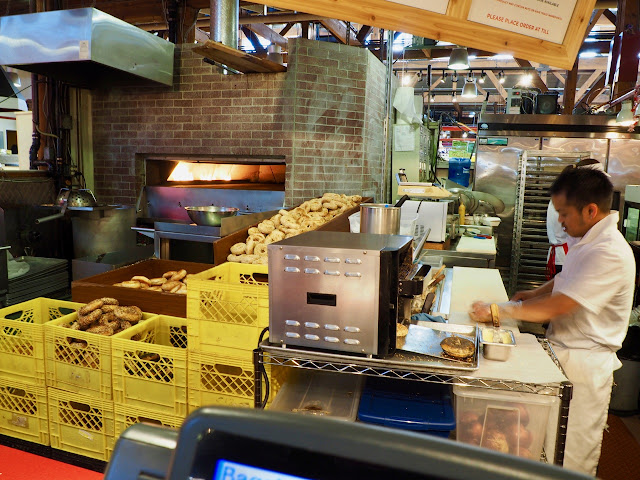 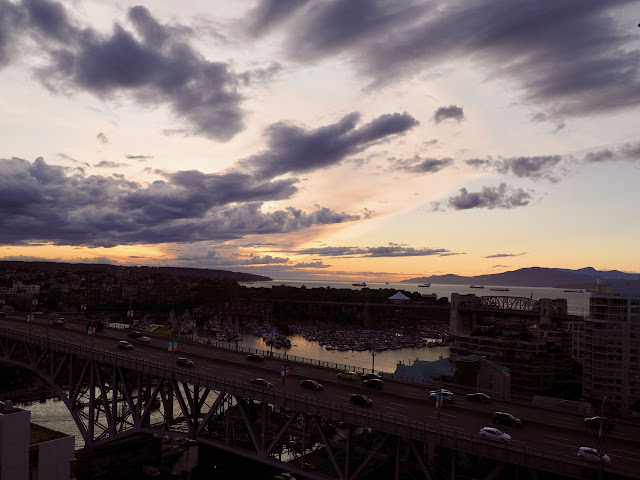 The fellow at the quilt shop gave me some good information about the transit card, called a Compass Card. He told me I could buy it at my new fave, Shopper's Drug Mart, and so I did, intending to use it yesterday to go further afield. Except the day began gloomy. Today the same happened, but the clouds are breaking up right about now. I can't wait to show you where I go next.

Until we meet again.