The Calendar May Change But....

Yes, the dates on the calendar may change, however, around here it is hard to tell one day from another. And while I wish I could bring good news about Cris, he remains in critical care for the foreseeable future. I take that back, he has not worsened which is somewhat good news. So far they have tried all sorts of things without much success. They've just started him on something new so perhaps that will be the one that will put him on the road to recovery. At the same time that we've all been worried sick about Cris, I've just learned that a very faithful reader of Camera Crazy is quite ill, however, her situation is a familiar one to most of us. Cancer. I'm heartsick upon learning that news. Her name is Barbara, and she is in a lot of pain, and could use our collective prayers for comfort.

Let's begin our pictures with a bad one. It pains me to post it, but one of the main reasons I blog is for documentation of life and sometimes that doesn't turn out as I hope. At least it shows that it happened! Yes, the other morning, there were two owls and my pictures are horrible. I took this a few days ago and only just saw it this afternoon. Boo hoo! It is my practice to take a bunch when something like this happens, however, the owl on the left flew off within minutes of my spotting them. It is a good reminder that even someone who has a camera in their hand every day still takes crummy pictures. 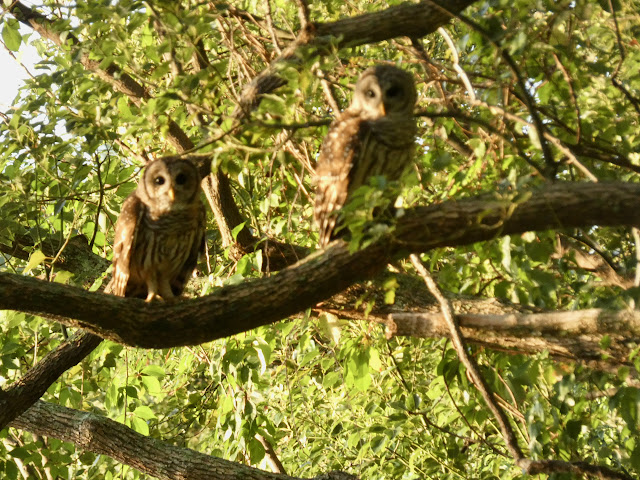 Here was Mr. Bruce working on the pickleball rack in his makeshift shop. Isn't that rug so fun? 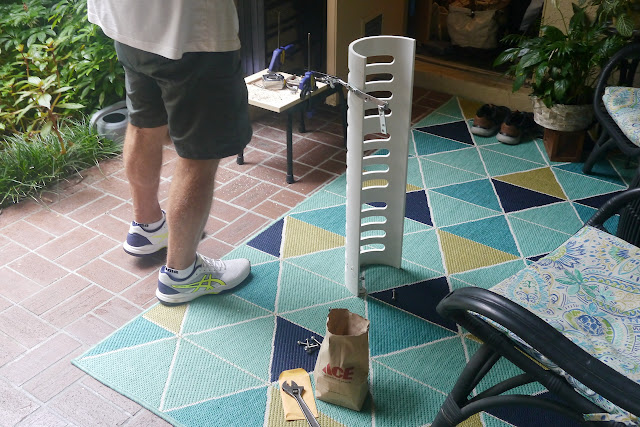 Here's a funny story that some folks have already heard. Michelle and David gave me a Lily gift card for Christmas. It is well known that it takes me forever to finally use a gift card, but a few weeks ago seemed like the time to finally pull the trigger. To make a long story short, I ordered a dress online, it came and was child sized and then it sat here for nearly two weeks while I pondered my next step. Finally I decided to take it back to the store at The Mall at Millenia, a decision not made lightly as I've been to Publix and Clemons and that's about it during the last four, or is it five months? Apparently, I'm not the only one who is having trouble with venturing out. I parked at Bloomingdales and the next photos are for documenting what it is like during the surge in Coronavirus cases here in Florida. 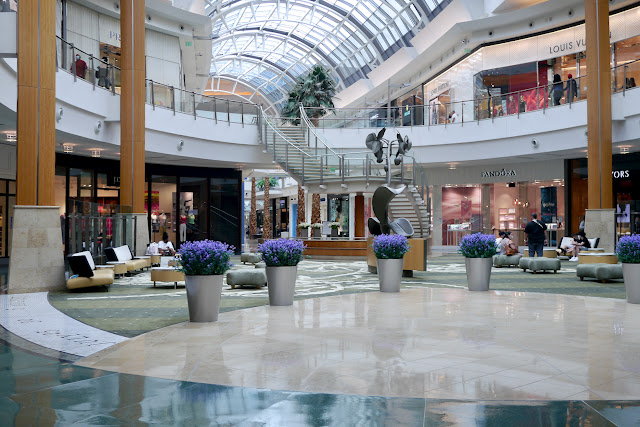 This gave me pause. A beautiful store, I've since read that Neiman Marcus is one of the many retailers filing for bankruptcy during the pandemic. 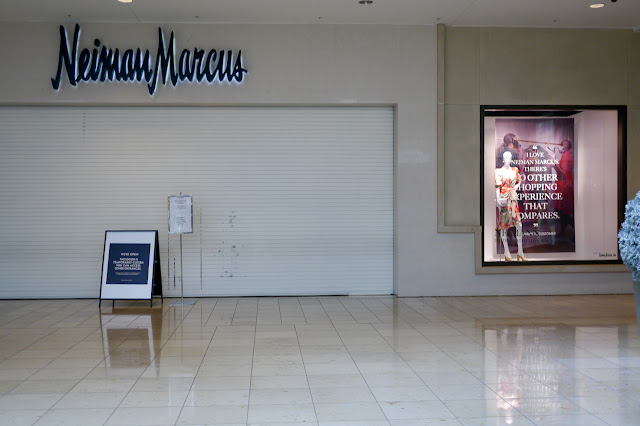 You may not be able to read the sign that says they are open, but you should enter from the street side, unlike Vineyard Vines that is open only for orders. 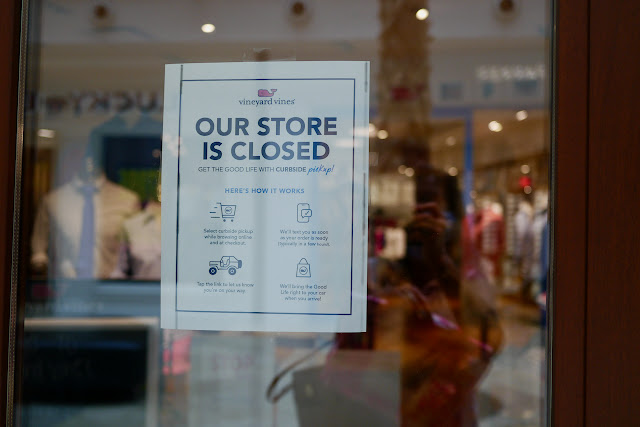 The Apple store in this mall is normally teaming with people. Not only were there no people aside from the one woman, there were no products either. I've been in here on numerous occasions when busloads of Brazilians are in line, having flown in to shop. Not happening these days. 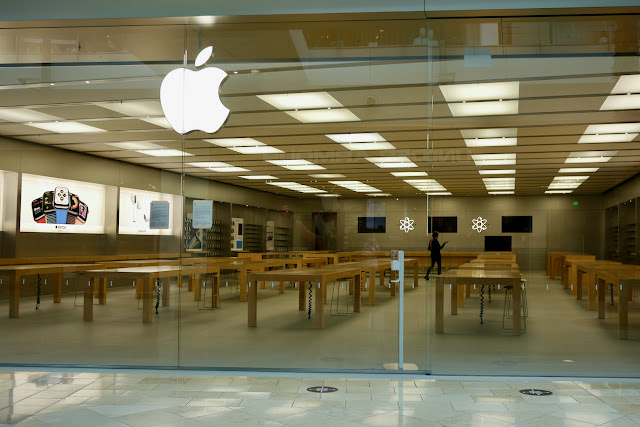 They were so happy to welcome customers back to Kate Spade, but I'm guessing they did not mean little boys in masks as their target audience. 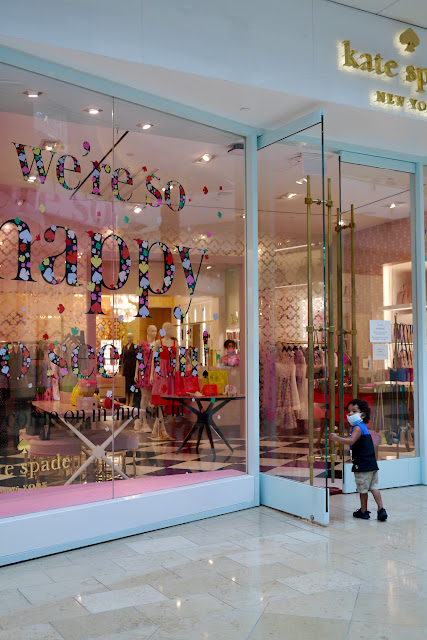 And what could be more sad than this? Well, obviously lots of things, but still. BTW--there was no need for the signs as there were no people! 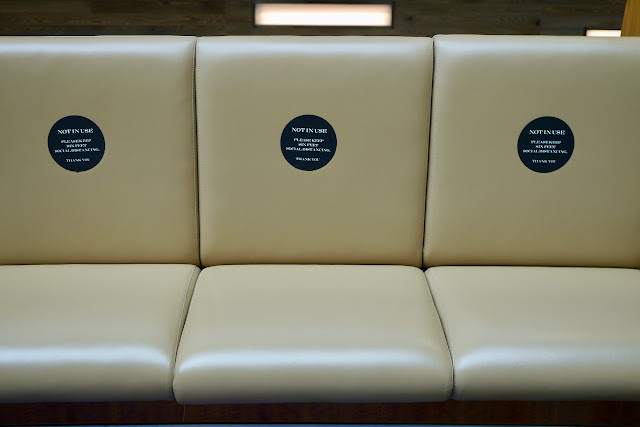 Guards were in attendance but hardly anyone else was. 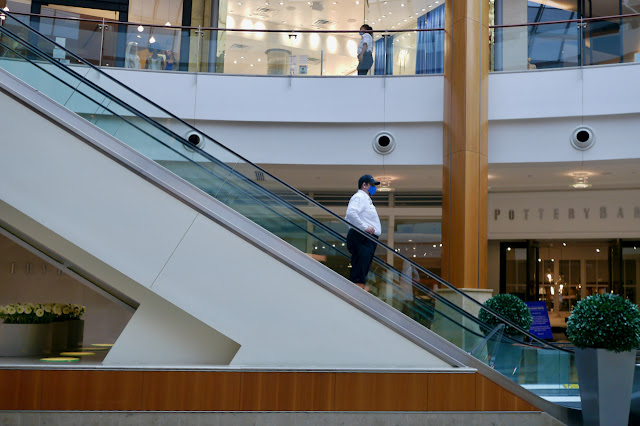 The beauty department at Bloomingdales is also normally packed with shoppers. 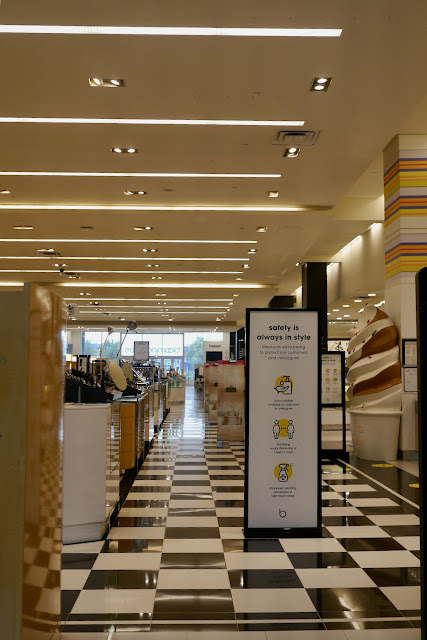 So, I went to the store, held up the dress because the girl would have had to put on gloves, and we sorted it out.  I'd ordered a medium and while the hanging tag said that, the inside of the dress said, XXS. No wonder! Silly me for not thinking of looking inside. I left with nothing as it was not in stock, but while I've been sitting here typing, the new dress arrived and it is cute as can be. My mall adventure took me through Bloomies, and on to Lily and then back again. There was not the least problem finding my car in the parking lot. 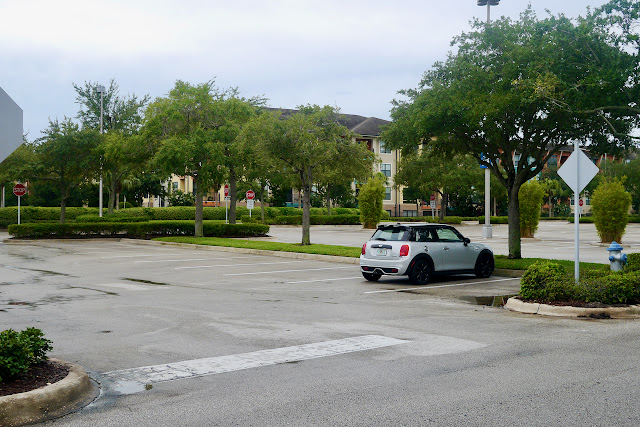 I'm looking out the window right now and this fellow is on a branch within easy sight. We have so many hawks around here that can be heard screaming at all times of the day. 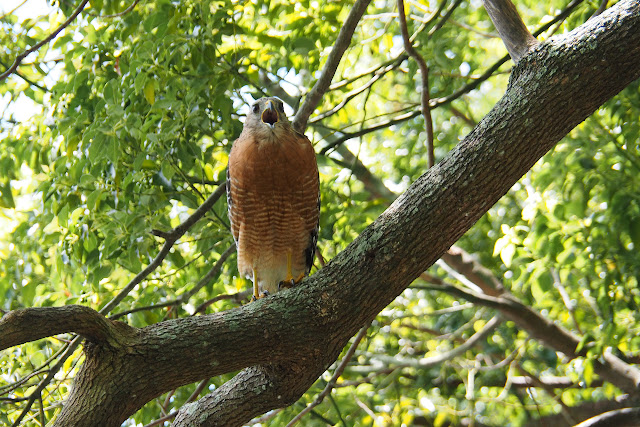 I finally got to working on the quilt again and the sewing was made all the easier because I found a fantastic podcast to listen to called Missing in Alaska. Absolutely fascinating to learn about two congressman, one the speaker of the House, who disappeared in the mid 70's and have never been found! We'd played pickleball with the group for hours and while they went out to lunch, I was the curmudgeon who wanted to stay home in order to social distance. I've been asked how in the world  Cris and Jessica got Covid-19 because the only time he'd left the house was to go out to eat on Father's Day. Well, it's a mystery, but if staying home from restaurants will help, I'm all in and that is coming from a family that owns a bunch of restaurant stock. Speaking of restaurants, during the pandemic we've had outside food maybe four or five times. While I was typing this I thought, maybe it would be a good night for Chinese food so we made that happen. I should not have bothered as it was not very good. 😦

After practicing pickleball this morning with Patty, Yvette, and Connie, we were more than ready for the swimming pool after lunch. Our Mama duck is still on her nest. The other day Gayle did a search and learned that Mallards stay on the nest for 28 days, something I was clueless about, so presuming we saw her early on, it will be short of two weeks until the eggs hatch. 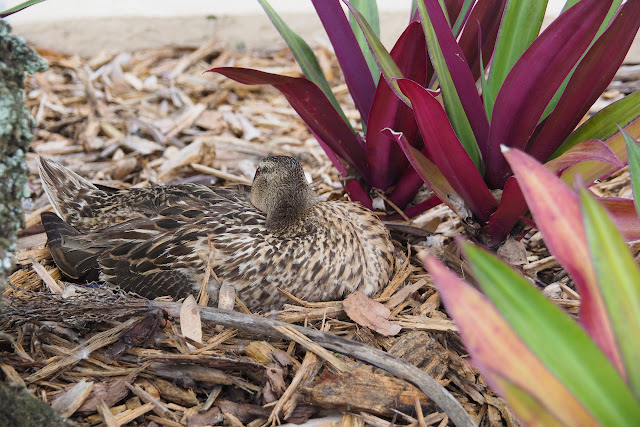 One thing that has been a real blessing during the pandemic is Bruce has had loads of time to read novels, something that was in short supply during his demanding career. We both took a book to the pool, reading in the shade and enjoying the refreshing water until such time as the clouds began to gather. I read a neat thing in yesterday's paper about the mountains of Florida. Say what? Although we don't have any mountains, they compared our towering clouds to mountains. I must say, they are pretty great even though they aren't real mountains. The rain across the lake moved right over us, producing tremendous thunder and lightning, lasting for quite some time. Strong enough that I shut off my computer for a while as I don't need any problems with it. Recently Dave and Michelle's huge television suffered that fate. 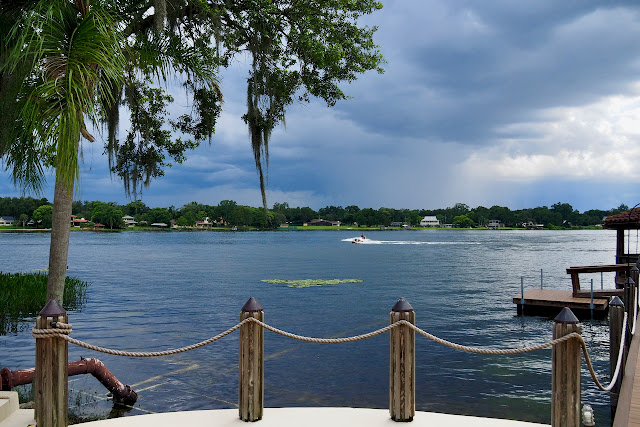 So this is life inside our little Lake Pineloch Village bubble during the pandemic. All of our sons are still working from home, the cases are going up, with seemingly no end in sight. That said, I know that this too shall pass but when? That is the question of 2020, and I don't think I really want to know the answer.

Putting my Wrist to the Test 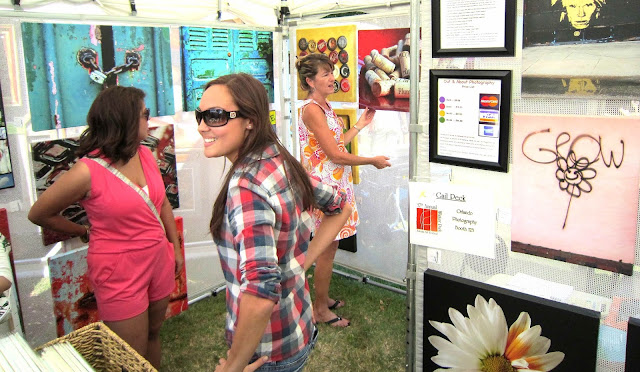