A Man and His Dog

March 08, 2013
Have you washed your hairbrush or comb lately? I hadn't either, until last week, when it finally occurred to me that it might be a good idea. And it was. Just saying.....

Visiting the cemetery the other day, I discovered that my parent's joint headstone has a flower opening in the top which looked pretty sad as an empty vessel. Of course, that's saying something right there, but in this life, it looked naked. My mother used to say, "so and so would be rolling over in their grave," a common enough saying for sure, and if somehow she saw me on Wednesday, she might just be rolling over herself because I went to the Dollar Store and bought some fake flowers. Yep, I did. 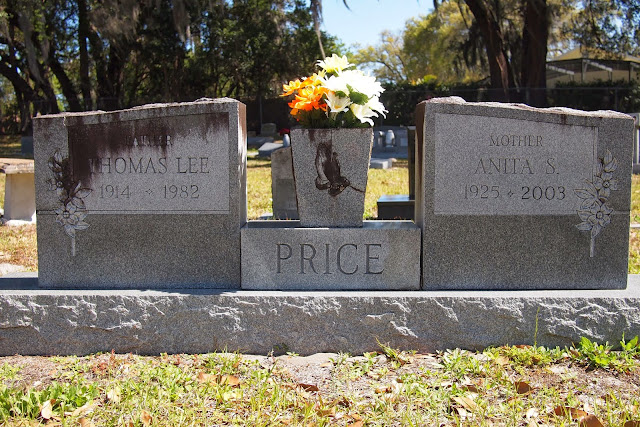 Next thing I'll be heading over to clean that black stuff off of my Father's grave. Probably not, but there are folks that get pretty carried away with this graveside, dare I say, decoration? 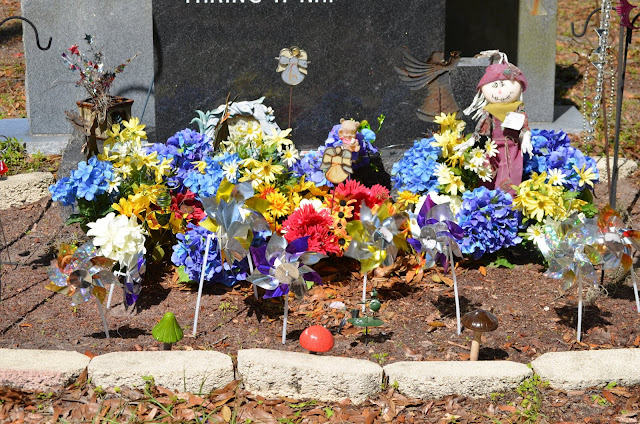 Seeing downtown through the trees is a pretty nice feature of this city-owned cemetery: 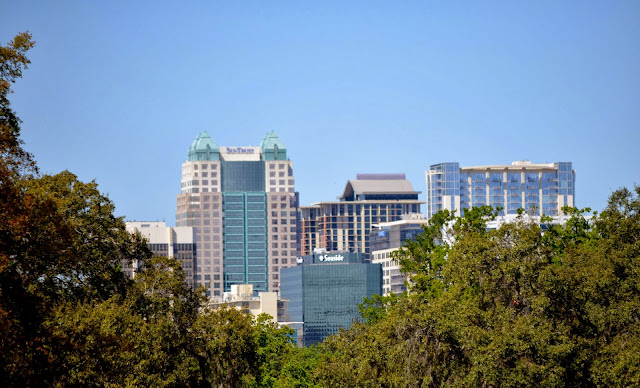 While shopping at the Dollar Store, as it was a super windy day, this pinwheel caught my eye. Somehow, the shutter speed was so fast it looks still, when in fact, it was spinning like mad, causing Baxter who had gotten too close for a sniff, to scoot away mighty quick! 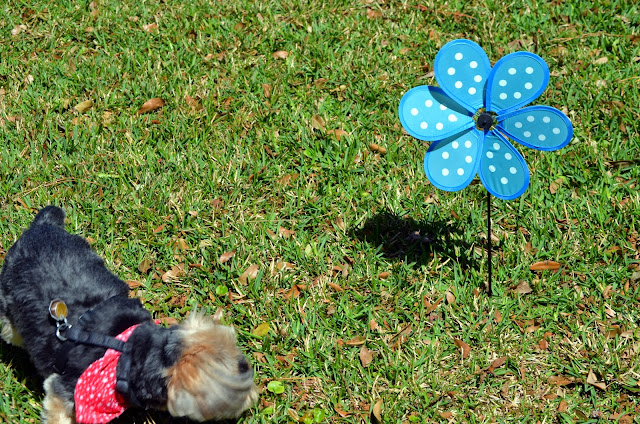 He's still sporting his little kerchief from his grooming which was sorely needed. Everytime I vow to be better about scheduling his appointment, and never follow through. I'm lucky she calls me.

The alarm went off at 6 AM yesterday morning, early enough for me to drag myself up and into the shower for my 7AM appointment at the Honda dealership. A call from Honda last week, saying the airbag in the Pilot can suffocate the driver, forced me into it. Once I learned from the service advisor that it might take upwards of four hours, I decided getting in there early was for the best. I canceled my bridge game, which turned out to be unnecessary because around 9:30 I heard my name called and not a minute too soon for me. I'm so accustomed to silence that between the constant blaring from both a tv and overhead music, not to mention all the sales guys having their morning pep talk, I was about to go crazy. Turning my keys over to the service guy earlier, he asked me if I wanted a car wash as well. What kind of question is that? Who doesn't want someone else to wash their car???

I convinced Bruce to quit working a little after 4 in the afternoon so he could spend some time out on the lake. I was lounging around watching the golf tournament. Dressing in a sweatshirt and jeans, he took my advice. My lounging lasted about an hour and then I went into the kitchen to prepare our dinner, something I'm so looking forward to doing on a regular basis soon. As the sun was just beginning to set, I put Mr. Baxter on his leash and walked down to the lake with my camera slung over my shoulder. Finding Bruce near the shoreline, he said he was just about ready to call it a night. Mr. Baxter was going haywire, going so far as to step into the lake a wee bit, barking for him to come in now! Bruce is such a softie when it comes to Baxter, so you know what happened next. 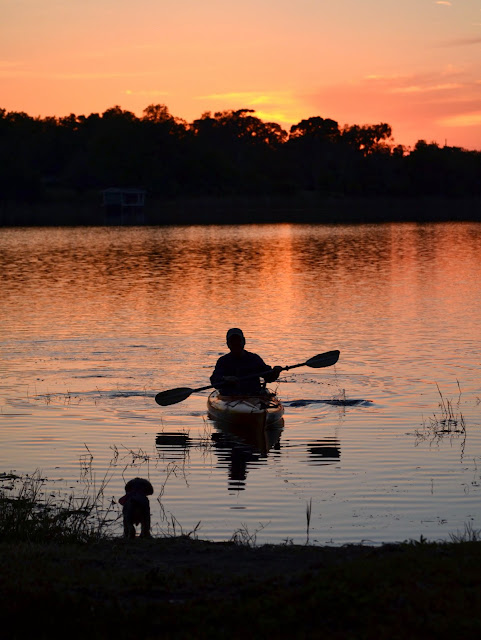 Once on shore, he told me he saw two otters in the lake! I haven't been out on it for years now; ever since Bruce got his kayak, the canoe has remained on the rack in the backyard. It must have been a cute sighting. After dinner we studied some Florida guidebooks; we're thinking about taking a couple day trip next week, nothing definite yet, but we're in discussion.

Oh, I forgot to tell you about this cute little table I found on sale at Pier One: 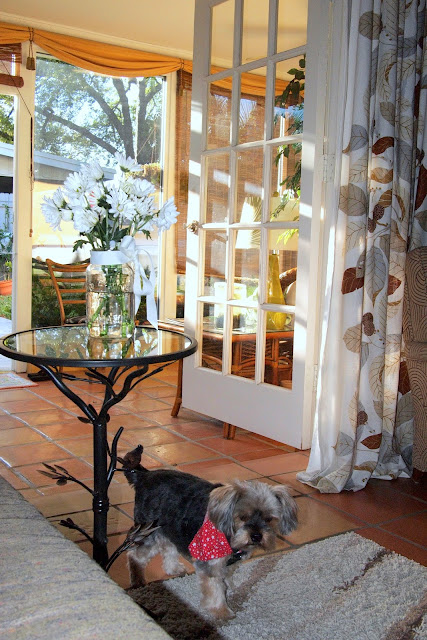 I love having a couch on both sides of the room, however,  not having anywhere to set a drink has made it less than ideal to sit on the couch in the foreground. It's small ,but perfect. Plus, it has a little birdie on a branch. :)

One of my facebook friends, formerly from Flickr, lives in Massachusetts, and is a few years younger than I am. She's gone back to school, and regularly posts about her travails in mathematics. Obviously, I can feel her pain. Going back years and years in my blog history, I sent her this, hoping to encourage her. Once she read it, she asked me how I was feeling these days? Good, thank you very much. Telling her, that now, it all seems like it happened to someone else. That said, when I read the post I felt sad for me back then, and am doubly grateful to be feeling "right as rain" these days.

The clock tells me it is time to go pick up my prints. Thinking ahead to the Gainesville show, I ordered more than usual, so you know what I'll be doing for the rest of the afternoon.

Thanks for reading!
Gail

e said…
Really like the sunset shot with Bruce and Baxter in silhouette. Beautiful. Also how funny that Baxter is in so many of the pictures. My cats won't be photographed on purpose but will step into the frame any time I'm trying to photograph something else.
March 8, 2013 at 2:33 PM